“There was a rich man, who was clothed in purple
and fine linen and who feasted sumptuously every day.
And at his gate lay a poor man named Lazarus…”
Luke 16:19–20

St Peter Chrysologus (400-450)
Bishop of Ravenna, Doctor of the Church

Sermon 122, On the rich man and Lazarus

“Abraham was very rich,” Scripture tells us (Gn 13:2)… My brethren, Abraham wasn’t rich for himself but for the poor, rather than keeping hold of his fortune, he intended to share it…This man, who was himself a stranger, did not hesitate to do all he could so that the stranger might not feel himself to be a stranger.   Living in a tent, he was unable to let a passer-by remain without shelter.   Perpetual traveller, he unfailingly welcomed the travellers who came his way…  Far from taking his ease in God’s bounty, he knew himself called to spread it abroad, he used it to protect the oppressed, set prisoners free, even to snatch those about to die from their fate (Gn 14:14)…  Abraham did not sit but remained standing before the stranger he had received.   He was not his guest’s host but made himself his servant.   Forgetting that he was master in his own home, he himself brought the food and, concerned that it should be carefully prepared, called on his wife.   Where he himself was concerned he relied entirely on his servants, but for the stranger he had received he thought it barely enough to entrust it to his wife’s skill.
What more could I say, my brothers?   It was so perfect a consideration… that drew God himself to Abraham’s home and compelled him to become his guest.   Thus the very one who would later claim to be welcomed in the person of the poor and the stranger, came to Abraham, rest for the poor, refuge of strangers.   “I was hungry,” he said, “and you gave me food, I was thirsty and you gave me drink, a stranger and you welcomed me” (Mt 25:35).
And again, we read in the Gospel:  “When the poor man died, he was carried away by angels to the bosom of Abraham.”   Isn’t it only right, brethren, that Abraham should welcome all the saints even into his own rest and should exercise, even in the blessedness of heaven, his service of hospitality?…  Doubtless, he could not have considered himself wholly happy unless, even in glory, he was able to continue to practice his ministry of sharing.”

Daily Meditation:
Bring us back to you.

The story of the Rich Man and Lazarus is our lesson today.
We beg to be open to the workings of the Spirit,
that we might not settle for the consolations of this life alone.

Blessed is the man
who walks not in the counsel of the wicked,
nor stands in the way of sinners,
nor sits in the seat of scoffers
but his delight is in the law of the Lord
and on his law he meditates day and night.
Psalm 1:1-2

LOVE OF OUR NEIGHBOUR

“All of our religion is but a false religion and all our virtues are mere illusions and we ourselves are only hypocrites in the sight of God, if we have not that universal charity for everyone, for the good and for the bad, for the poor people as well as for the rich, for all those who do us harm as much as for those who do us good.
No, my dear brethren, there is no virtue which will let us know better whether we are the children or God than charity.
The obligation we have to love our neighbour is so important, that Jesus Christ put it into a Commandment, which He placed immediately after that by which He commands us to love Him with all our hearts.   He tells us that all the law and the prophets are included in this commandment to love our neighbour.   Yes, my dear brethren, we must regard this obligation as the most universal, the most necessary and the most essential to religion and to our salvation.   In fulfilling this Commandment, we are fulfilling all others.   St Paul tells us that the other Commandments forbid us to commit adultery, robbery, injuries, false testimonies.   If we love our neighbour, we shall not do any of these things because the love we have for our neighbour would not allow us to do him any harm.” 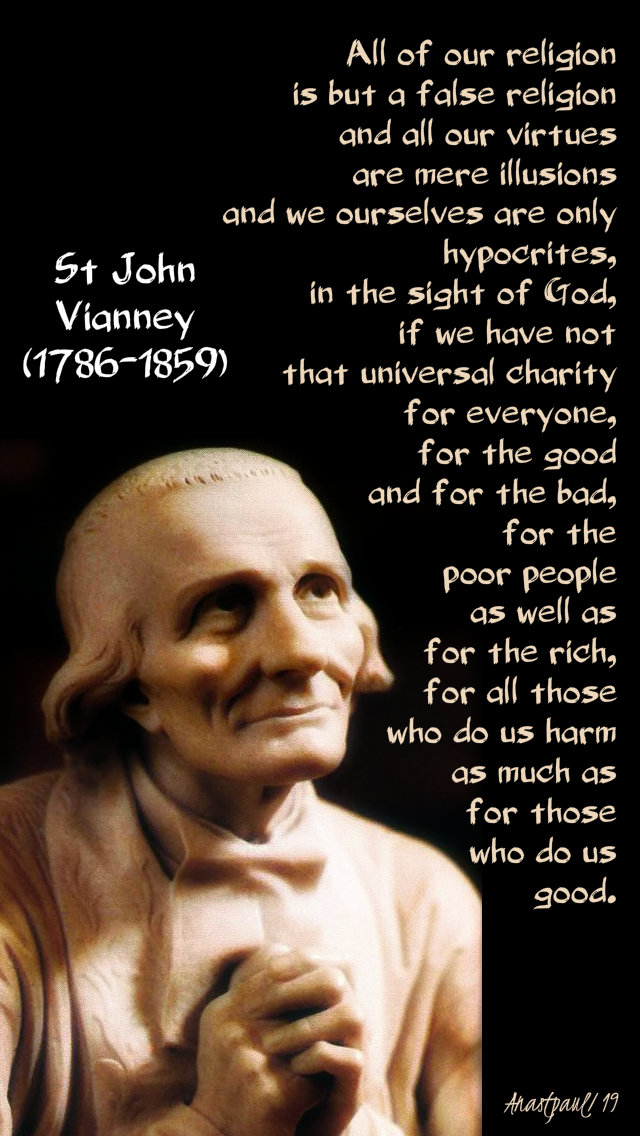 Closing Prayer:
Loving God,
I hear your invitation, “Come back to me”
and I am filled with such a longing to return to You.
Show me the way to return.
Lead me this day in good works I do in Your name
and send Your Spirit to guide me and strengthen my faith.
I ask only to feel Your love in my life today and if You are with me, how can I not love my neighbour?

May the Lord bless us,
protect us from all evil
and bring us to everlasting life.
Amen