Marian Thoughts – 17 May – ‘Mary’s Month’ – Thursday of the Fourth Week of Easter, C

“Praying the Rosary together as a family,
s very beautiful and it gives us strength.”
Pope Francis

The Fourth Joyful Mystery:  The Presentation

Forty days after Christmas, we celebrate the Lord who enters the temple and comes to encounter His people.
In the Christian East, this feast is called the “Fest of Encounter” – it is the encounter between God, who became a child, to bring newness to the world and an expectant humanity, represented by the elderly man and woman in the Temple.
In the Temple, there is also an encounter between two couples – the young Mary and Joseph and the elderly Simeon and Anna.   The old receive from the young, while the young draw upon the old.   In the Temple, Mary and Joseph find the roots of their people. This is important, because God’s promise does not come to fulfilment, merely in individuals, once for all but within a community and throughout history.   There too, Mary and Joseph find the roots of their faith, for faith is not something learned from a book but the art of living with God, learned from the experience of those who have gone before us.   The two young people, in meeting the two older people, thus find themselves. And the two older people, nearing the end of their days, receive Jesus, the meaning of their lives.   This event, fulfils the prophecy of Joel: “Your old men shall dream dreams and your young men shall see visions” (2:28).
In this encounter, the young see their mission and the elderly realise their dreams.
All because, at the centre of the encounter, is Jesus … May we never look at the screen of our cell phone more than the eyes of our brothers or sisters or focus more on our software, than on the Lord….Pope Francis 2018 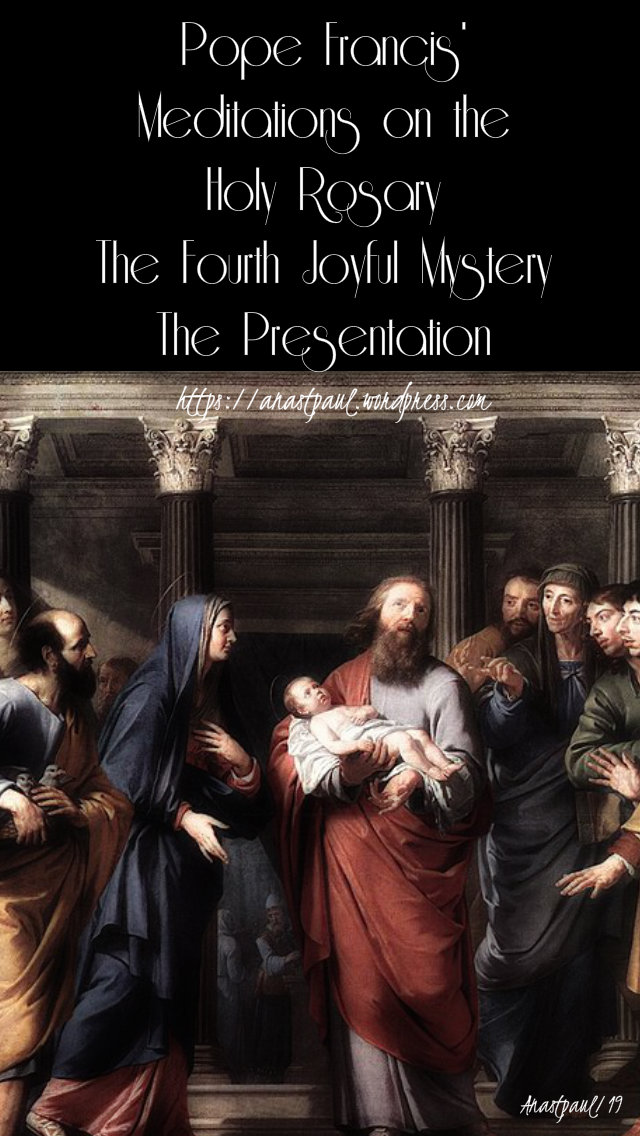 Quote/s of the Day – 17 May – Thursday of the Seventh Week of Easter, C and the Memorial of St Paschal Baylon OFM. (1540-1592) “Seraph of the Eucharist” – Patron of Eucharistic Congresses

“God is as really present
in the consecrated Host
as He is, in the glory of Heaven.” 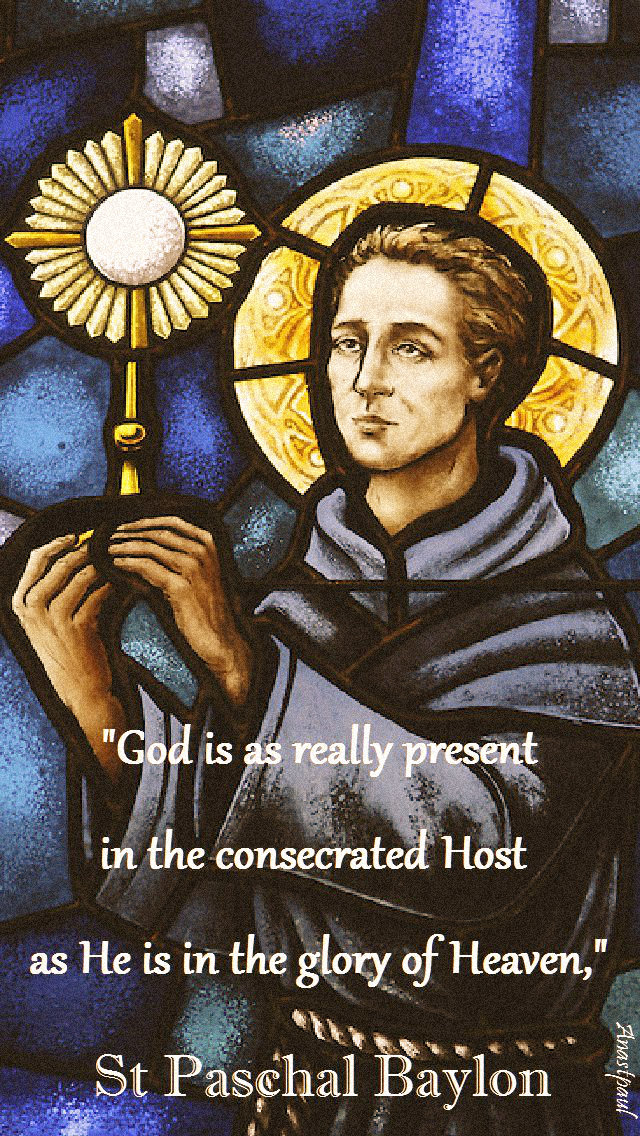 “There is no more efficacious means than this
(Eucharistic Adoration)
for nourishing and increasing the piety of the people
toward this admirable pledge of love
which is a bond of peace and of unity.” 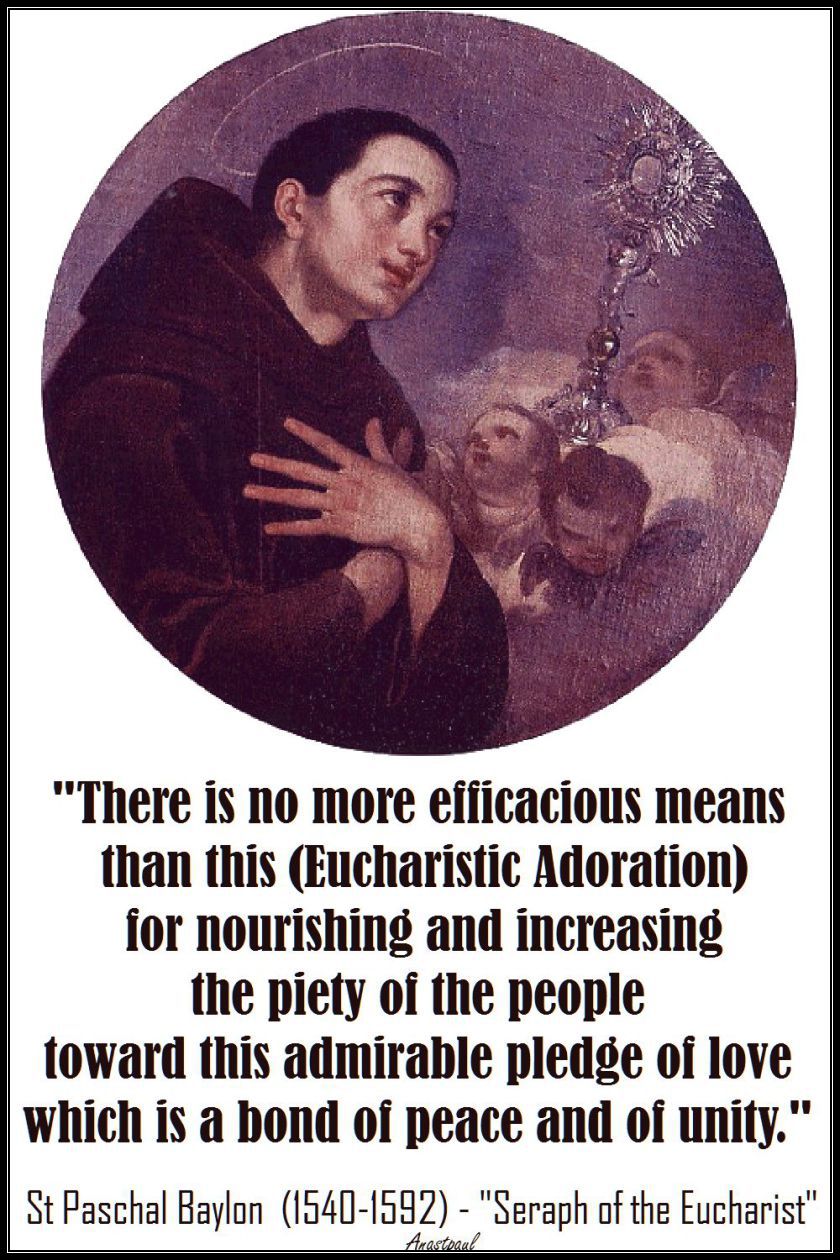 “O Father Eternal God,
Grant me faith and courage.
Son, wisdom of the Father,
grant me light and make me wise.
Holy Spirit, beloved of Father and Son,
inflame my heart and purify my soul,
that I may approach
this majestic Sacrament,
with faith and love.” 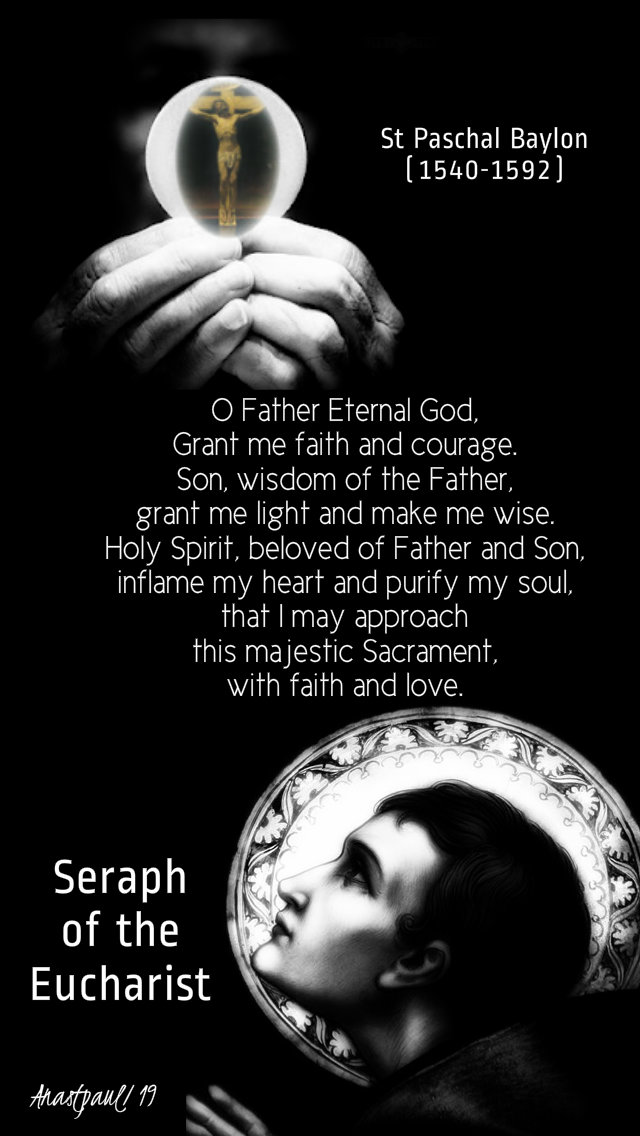 The Preservation of Unity

“And when I go and prepare a place for you, I will come again and will take you to myself, that where I am you may be also.”...John 14:3

An excerpt from his Letter to the Corinthians 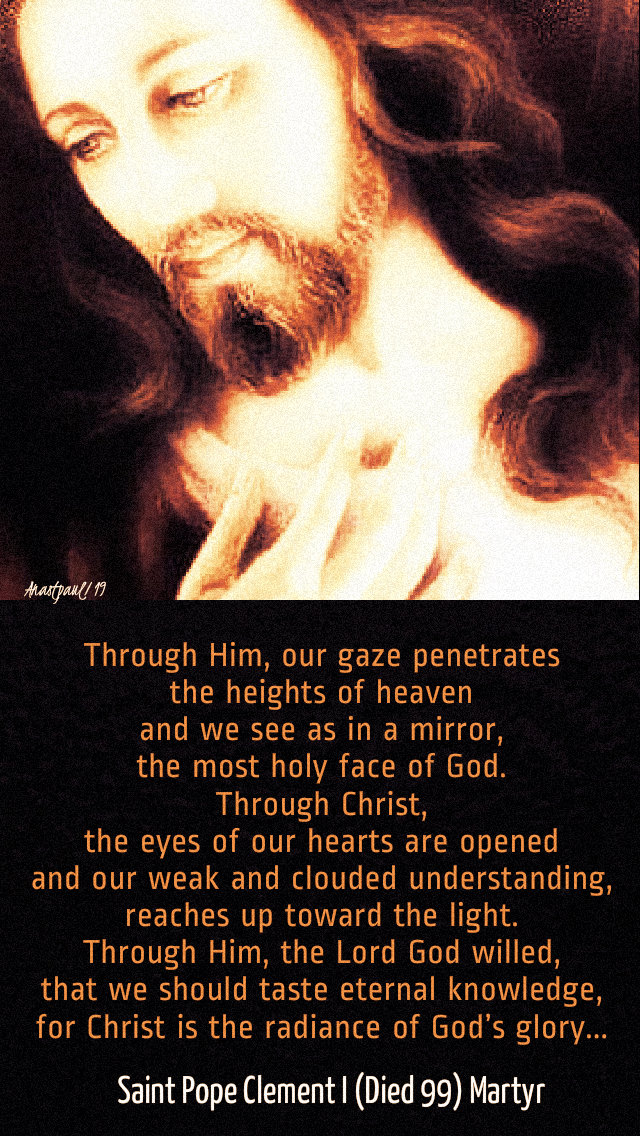 Beloved, Jesus Christ is our salvation, He is the high priest through whom we present our offerings and the Helper, who supports us in our weakness.   Through Him, our gaze penetrates the heights of heaven and we see as in a mirror, the most holy face of God. Through Christ, the eyes of our hearts are opened and our weak and clouded understanding, reaches up toward the light.   Through Him, the Lord God willed, that we should taste eternal knowledge, for Christ is the radiance of God’s glory and as much greater than the angels, as the name God has given Him is superior to theirs.

So then, my brothers, let us do battle with all our might, under His unerring command. Think of the men serving under our military commanders.   How well disciplined they are!   How readily and submissively they carry out orders!   Not everyone can be a prefect, a tribune, a centurion, or a captain of fifty but each man, in his own rank, executes the orders of the emperor and the officers in command.   The great, cannot exist, without those of humble condition, nor can those of humble condition, exist without the great.   Always, it is the harmonious working together, of its various parts, that insures the well-being of the whole.   Take our own body as an example –  the head is helpless without the feet and the feet can do nothing without the heart.   Even our least important members, are useful and necessary, to the whole body and all work together for its well-being in harmonious subordination.

Let us, then, preserve the unity of the body that we form in Christ Jesus and let everyone give his neighbour the deference, to which his particular gifts, entitle him.   Let the strong care for the weak and the weak respect the strong.   Let the wealthy assist the poor and the poor man thank God for giving him someone to supply his needs.   The wise man should show his wisdom, not by his eloquence but by good works, the humble man should not proclaim his own humility but leave others to do so, nor must the man who preserves his chastity, ever boast of it but recognise that the ability to control his desires has been given him by another.

Think, my brothers, of how we first came into being, of what we were at the first moment of our existence.   Think of the dark tomb, out of which our Creator brought us into His world, where He had His gifts prepared for us, even before we were born.   All this we owe to Him and for everything, we must give Him thanks.   To Him be glory forever and ever. Amen 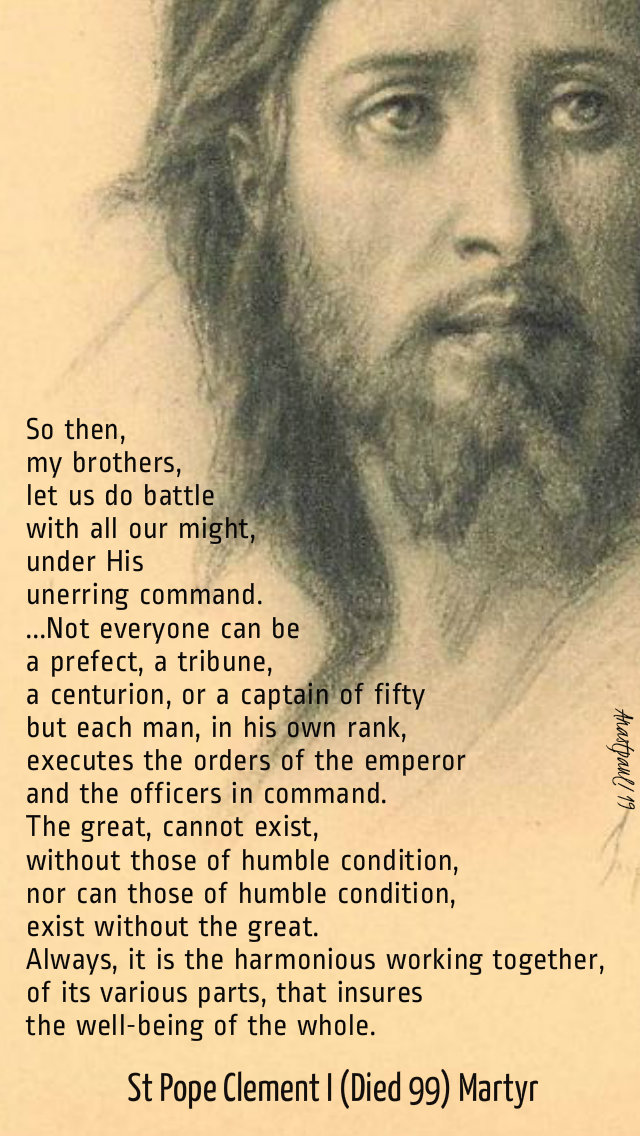 One Minute Reflection – 27 April – Friday of the Fourth Week of Easter C, – Gospel: John 14:1-6 and the Memorial of St Paschal Baylon and St Giulia Salzano

“Let not your hearts be troubled, believe in God, believe also in me.“…John 14:1 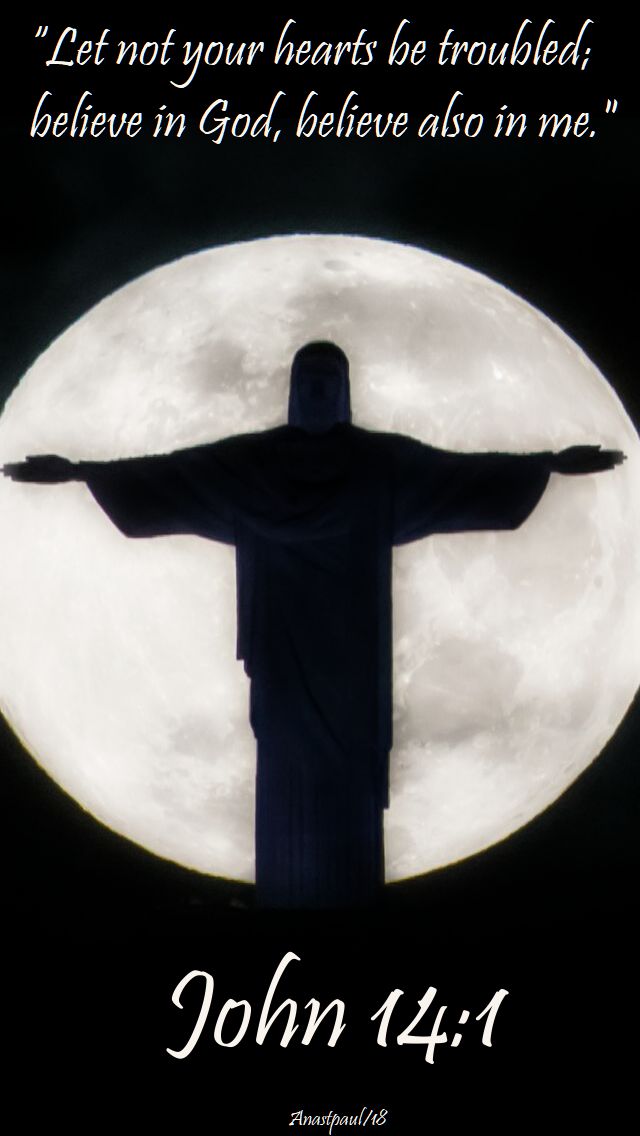 REFLECTION – “I will not mistrust Him, Meg, although I shall feel myself weakening and on the verge of being overcome with fear.   I shall remember how St Peter at a blast of wind, began to sink, because of his lack of faith and I shall do as he did – call upon Christ and pray to Him for help.   And then I trust, He shall place His holy hand on me and in the stormy seas, hold me up from drowning.”…St Thomas More (1478-1535) 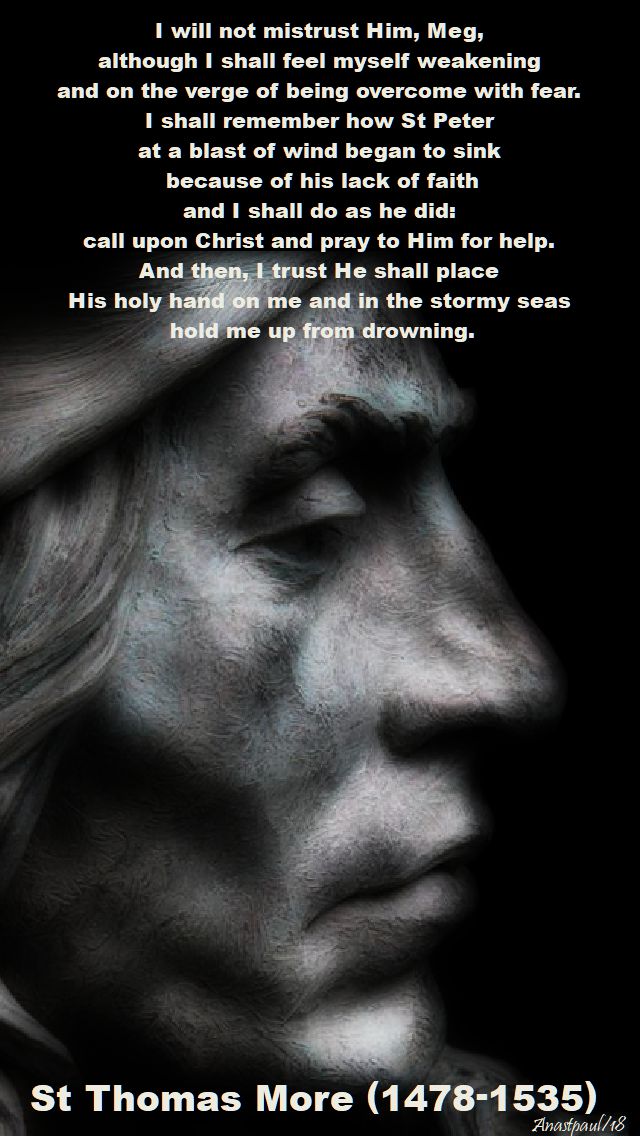 PRAYER – “[Lord God] I believe in You, increase my faith.   All my hopes are in You, secure my trust.   I love You, teach me to love You more each day… I adore You as my first beginning, I long for You as my final end.   I praise You as my constant helper and call on You as my loving protector.   Guide me by Your Wisdom, correct me with Your Justice, comfort me with Your Mercy, protect me by Your Power… Lord, enlighten my understanding, enflame my will, purify my heart, sanctify my soul.   Help me to repent of my past sins and to rise above my human weaknesses and to grow stronger as a Christian…”(from the Universal Prayer by Pope Clement XI (1649-1721) 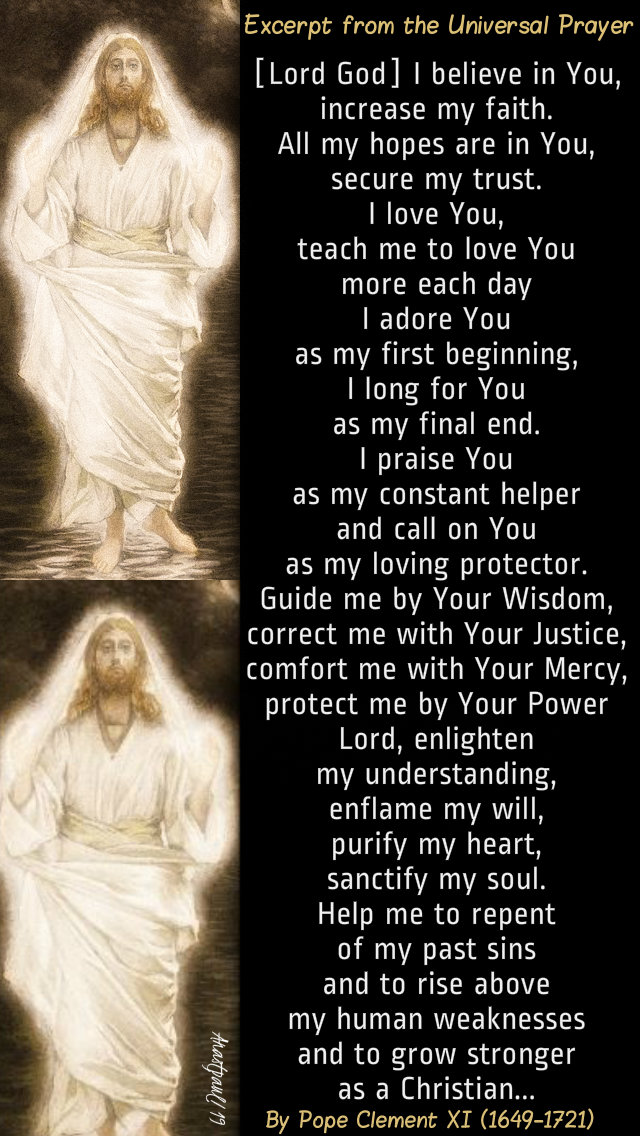 Deign, O Immaculate Virgin,
Mother most pure,
to accept the loving cry of praise
which we send up to you
from the depths of our hearts.
Though they can but add little to your glory,
O Queen of Angels,
you do not despise, in your love,
the praises of the humble
and the poor.
Cast down upon us a glance of mercy,
O most glorious Queen,
graciously receive our petitions.
Through your immaculate purity of body and mind,
which rendered you so pleasing to God,
inspire us with a love of innocence and purity.
Teach us to guard carefully the gifts of grace,
striving ever after sanctity, so that,
being made like the image of your beauty,
we may be worthy to become the sharers
of your eternal happiness.
Amen

St Paschasius Radbertus was a Theologian and the Abbot of Corbie.
Read about him here:   https://anastpaul.wordpress.com/2019/04/26/saint-of-the-day-26-april-saint-paschasius-radbertus-785-865/ 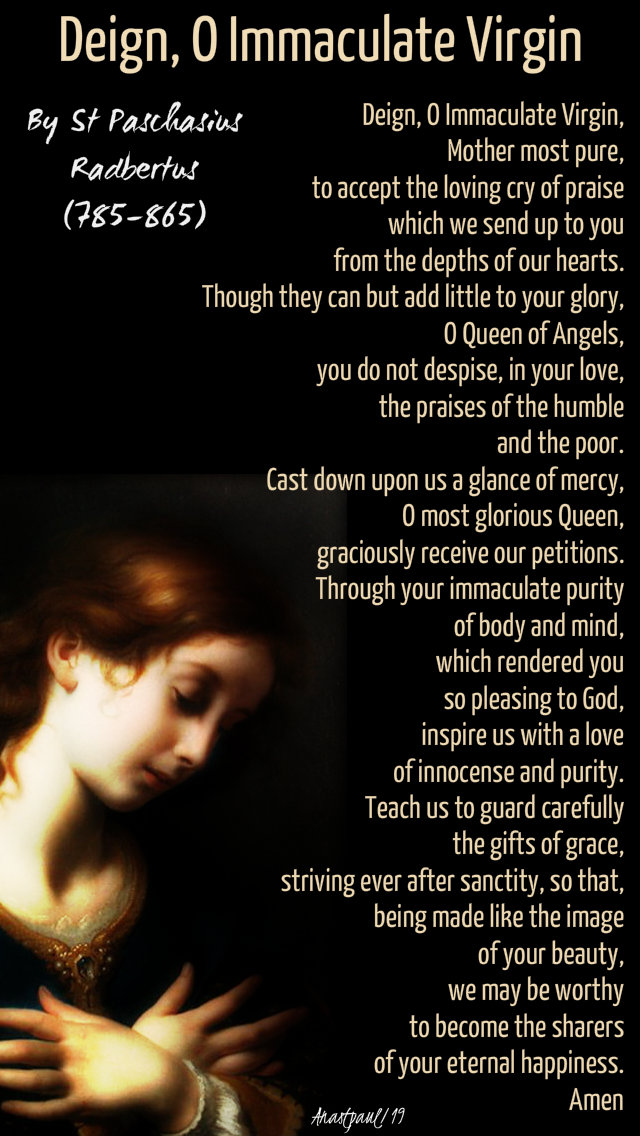 Saint of the Day – 17 May – Saint Giulia Salzano (1846-1929) Professed Religious Sister, Founder of the Catechetical Sisters of the Sacred Heart of Jesus (1905), Teacher, Catechist. She is the Patron of the Order she founded. 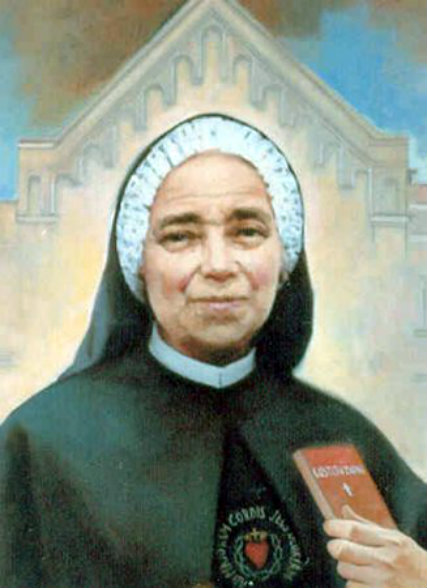 Giulia Salzano was born in Santa Maria Capua Vetere in the province of Caserta on 13 October 1846, the daughter of Adelaide Valentino and Diego Salzano, a Captain in the Lancers of King Ferdinand II of Naples.  Her father died when she was four and she was entrusted for her upbringing to the Sisters of Charity in the Royal Orphanage of Saint Nicola La Strada, where she remained until she was fifteen.   She earned a teaching diploma and then taught in the local school at Casoria, in the Province of Naples, having moved there with her family in October 1865.

Alongside her teaching, she had a great interest in the catechism, imparting the faith to children, young people and adults   She also encouraged devotion to the Virgin Mary.

Together with Blessed Caterina Volpicelli she promoted love of and devotion to the Sacred Heart, living the motto:  “Ad maiorem Cordis Iesu gloriam” –  “To the greater glory of the Sacred Heart.”

In her constant concern to make known the teachings and life of Jesus through education and witness, she founded the Congregation of the Catechetical Sisters of the Sacred Heart in 1905.

She devoted her life to the charism of catechesis, affirming:  “While I have any life left in me, I will continue to teach the catechism.   And then, I assure you, I would be very happy to die teaching the catechism”. 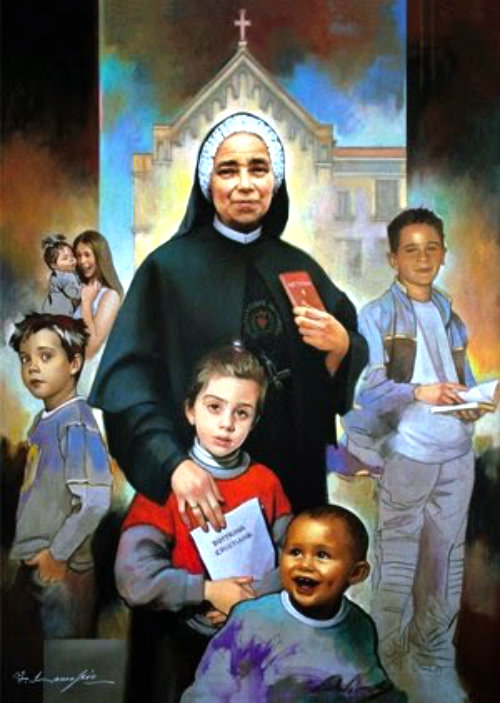 In the same way she exhorted her daughters:  “The Sister catechist must be ready, at every moment, to instruct the little ones and the uneducated.   She must not count the sacrifices such a ministry demands, indeed she should desire to die while doing it, if this be God’s will”.

Another Beatus, Ludovico da Casoria (1814–1885), in an almost prophetic style predicted:  “Take care not to be tempted to abandon the children of our dear Casoria, because it is God’s will that you should live and die among them”.   And so it was.

She died on 17 May 1929.  The previous morning she had met with 100 children preparing for their First Communion.   Her remains are housed in the motherhouse of the order in Casoria at Piazza Giovanni Pisa. 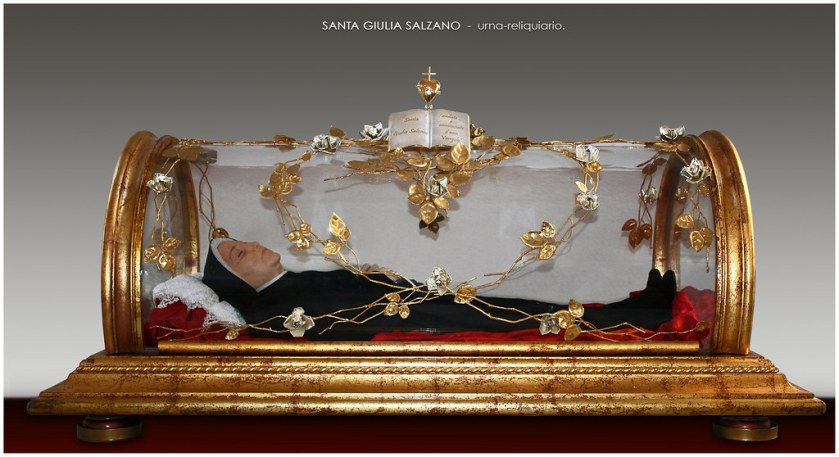 “Donna Giulietta”, as she was called by the people of Casoria, was so known for her holiness, that on 29 January 1937 the Cause for her Canonisation was introduced.   On 25 January 1994 the Positio, a voluminous dossier on her life, virtues and reputation for sanctity, was consigned to the Congregation for the Causes for Saints.   On 23 April 2002 Pope John Paul II ordered the publication of the Decree recognising the heroic nature of her virtues. 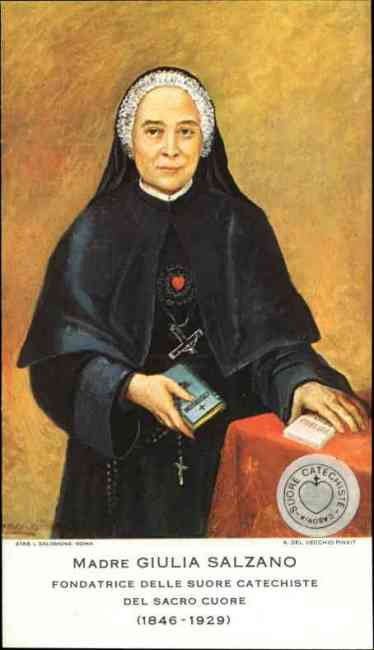 On 20 December of the same year Pope John Paul II signed the Decree recognising a miracle attributed to the intercession of Giulia Salzano, and declared her Blessed” …Vatican.va

She was Canonised by Pope Benedict XVI on 17 October 2010.

“In advance of her time, she was an apostle of the new evangelisation in which she combined apostolic activity with prayer, offered ceaselessly, especially for the conversion of the “indifferent”.   This new Blessed, encourages us to persevere in faith and never to lose our confidence in God who does all things.   Called to be the apostles of modern times, may believers also be inspired by Blessed Julia Salzano “to instil in many creatures the immense charity of Christ”. – St Pope John Paul II, from his homily during the beatification of Blessed Giulia

Martyrs of Nyon: A group of Christians martyred together in the persecutions of Diocletian. We know little more than three of their names: Aquilinus, Heradius and Paul. 303 at Noyon, Switzerland.