The Anguish of an Absence

There is a Gospel scene which in an extraordinary way anticipates the silence of Holy Saturday and which again, therefore, seems to be a profile of the moment in history we are living now.   Christ is asleep on a boat which, buffeted by a storm, is about to sink.
The prophet Elijah had once made fun of the priests of Baal who were futilely invoking their god to send down fire on their sacrifice.   He urged them to cry out louder in case their god was asleep.
But is it true that God does not sleep?   Does not the prophet’s scorn also fall upon the heads of the faithful of the God of Israel who are sailing with Him in a boat about to sink?   God sleeps while His very own are about to drown – is not this the experience of our lives?   Don’t the Church, the faith, resemble a small boat about to sink, struggling futilely against the waves and the wind and all the time God is absent?   The disciples cry out in dire desperation and they shake the Lord to wake Him but He is surprised at this and rebukes them, for their small faith.   But are things any different for us?   When the storm passes we will realise just how much this small faith of ours was charged with stupidity.
And yet, O Lord, we cannot help shaking You, God,   You who persist in keeping Your silence, in sleeping and we cannot help crying to You – Wake up, can’t You see we are sinking?   Stir Yourself, don’t let the darkness of Holy Saturday last forever, let a ray of Easter fall, even on these times of ours, accompany us when we set out in our desperation towards Emmaus so that our hearts may be enflamed by the warmth of Your nearness.
You who, hidden, charted the paths of Israel only to become a man in the end with men – don’t leave us in the dark, don’t let Your word be lost in these days of great squandering of words.

Lord, grant us Your help, because without You we will sink. Amen

“Why are you afraid, O men of little faith?”

“Whoever has become a servant of the Lord, fears only his Master.
But whoever is without the fear of God,
is often afraid of his own shadow.
Fearfulness is the daughter of unbelief.
A proud soul is the slave of fear,
hoping in itself,
it comes to such a state,
that it is startled by a small noise
and is afraid of the dark.”

“Suddenly a violent storm came up on the sea, so that the boat was being swamped by waves but he was asleep.”… Matthew 8:24

REFLECTION – “The sea offered its heaving back for Christ to walk upon.   Now it levelled its crests to a plain, checked its swelling and bound up its billows.   It provided rocklike firmness, so He could walk across the waterway.   Why did the seas heave so, and toss and pitch, even as if threatening its Creator?   And why did Christ Himself, who knows all the future, seem so unaware of the present thatHhe gave no thought to the onrushing storm, the moment of its height and the time of its peril?   While all the rest were awake, He alone was fast asleep even with utter doom threatening both Himself and His dear ones.   Why?   It is not a calm sky, beloved but the storm which tests a pilot’s skill.   When the breeze is mild, even the poorest sailor, can manage the ship. But in the crosswinds of a tempest, we want the best pilot with all His skill.”… Saint Peter Chrysologus (c 406 – c 450) (Sermons, 20)

PRAYER – Heavenly Father, grant me an operative faith – a faith that will move mountains and is strong enough to know that absolutely nothing and no-one here on earth can compare to You. Let me show that faith by lively love and by loving deeds and by conforming myself to Your will in all things – teach me that only YOU are first in line. This is how you lived your life Bl Eugénie Joubert putting only the God who created us first and now you are a Saint. Please pray for us. We make our prayer through Christ, our Lord, in the unity of the Holy Spirit, God forever and for always, amen.

O Incarnate Word,
You have given Your Blood and Your Life
to confer on our prayers that power by which,
according to Your promise,
they obtain for us all that we ask.
And we, O God,
are so careless of our salvation,
that we will not even ask You for the graces
that we must have, if we should be saved!
In prayer You have given us the key
of all Your Divine treasures;
and we, rather than pray,
choose to remain in our misery.
Alas! O Lord, enlighten us,
and make us know the value of prayers,
offered in Your name and by Your merits,
in the eyes of Your Eternal Father.
Amen

Saint of the Day – Blessed Eugénie Joubert (1876–1904) aged 28 – Religious of the Sisters of the Holy Family of the Sacred Heart – born on 11 February 1876 in Yssingeaux, Haute-Loire, France and died on 2 July 1904 in Liège, Belgium of tuberculosis.   Her life was noted for her staunch devotion to the Mother of God, her boundless care for the children in her charge and her commitment to her spiritual cultivation was well known and admired.

Eugénie Joubert was born in 1876 to Pierre Joubert and Antonia Celle as the fourth of eight children in France.

Joubert and her elder sister were placed in a boarding school that the Ursulines managed at Ministrel – both grew fond of their time there and came to like their experiences.   She made her First Communion on 29 May 1887.   On 6 October 1895 she joined a religious order at Aubervilliers (near Paris) and began as a postulant and then commenced her period of the novitiate, her mother bid her farewell and said:  “Don’t look back but become a saint!”.

On 13 August 1896 she received the habit from the order’s founder, Jesuit Louis-Etienne Rabussier and made her profession to him on 8 December 1897.   She followed the Spiritual Exercises twice in her novitiate.  She taught catechism to local children.

Bl Eugénie was assigned to be a catechist in Aubervilliers where she worked with poor children to prepare them for their First Communion.    She was then sent to Rome and later moved to Belgium in May 1904 but died soon after. 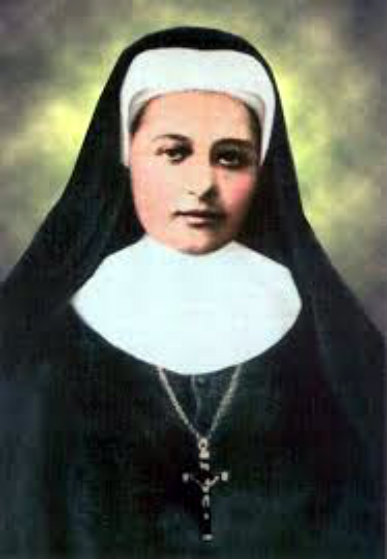 Bl Eugénie began to suffer from tuberculosis in 1902 and died in Belgium in 1904.   She had once collapsed from exhaustion after suffering a haemorrhage.   Her breathing grew much more laboured in her final hours and she was presented with an image of the Child Jesus to which she uttered her final words:  “Jesus … Jesus … Jesus”.

Her remains are interred in the chapel of the Sisters of the Holy Family of the Sacred Heart in Dinant, Belgium.

The cause for sainthood started under Pope Pius XI on 1 June 1938 – she was titled as a Servant of God – and the confirmation of her life of heroic virtue allowed for St Pope John Paul II to name her as Venerable on 9 June 1983, that same pope Beatified her on 20 November 1994. 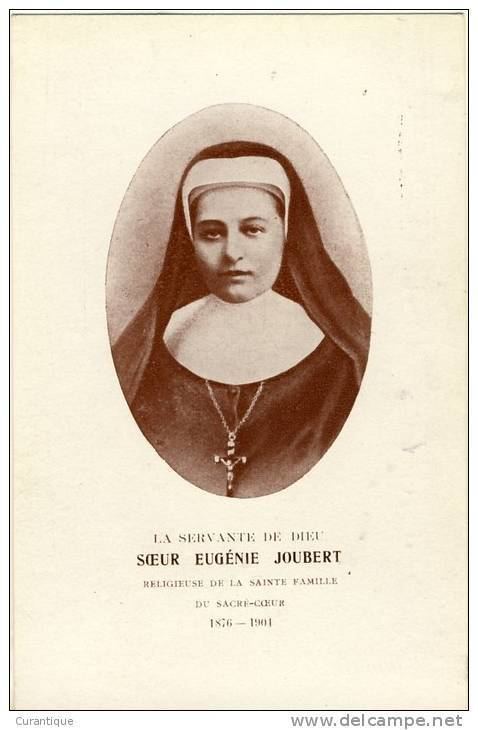 Martyrs in Carthage by Hunneric – 7 saints: A group of seven Christians tortured and murdered in the persecutions of the Arian Vandal king Hunneric for remaining loyal to the teachings of orthodox Christianity. They were some of the many who died for the faith during a period of active Arian heresy. – Boniface, Liberatus, Maximus, Rogatus, Rusticus, Septimus and Servus.

Martyrs of Campania – 10 saints: A group of ten Christians marytred together in the persecutions of Diocletian. The only details about them to have survived are their names – Ariston, Crescention, Eutychian, Felicissimus, Felix, Justus, Marcia, Symphorosa, Urban and Vitalis. Martyred in 284 in Campania, Italy.