The Song of the Church

An excerpt from his Apostolic Constitution, Divino afflatu

The collection of psalms found in Scripture, composed as it was under divine inspiration, has, from the very beginnings of the Church, shown a wonderful power of fostering devotion among Christians, as they offer to God a continuous sacrifice of praise, the harvest of lips blessing His name.   Following a custom already established in the Old Law, the psalms have played a conspicuous part in the sacred liturgy itself and, in the divine office.   Thus was born what Basil calls the voice of the Church, that singing of psalms, which is the daughter of that hymn of praise (to use the words of our predecessor, Urban VIII) which goes up, unceasingly, before the throne of God and of the Lamb and which teaches those especially charged with the duty of divine worship, as Athanasius says, the way to praise God and the fitting words in which to bless Him. Augustine expresses this well when he says:   God praised himself so that man might give him fitting praise, because God chose to praise himself man found the way in which to bless God.

The psalms have also a wonderful power to awaken in our hearts the desire for every virtue.   Athanasius says:  Though all Scripture, both old and new, is divinely inspired and has its use in teaching, as we read in Scripture itself, yet the Book of Psalms, like a garden enclosing the fruits of all the other books, produces its fruits in song and in the process of singing, brings forth its own special fruits to take their place beside them.   In the same place Athanasius rightly adds:   The psalms seem to me to be like a mirror, in which the person using them can see himself and the stirrings of his own heart, he can recite them against the background of his own emotions.   Augustine says in his Confessions:  How I wept when I heard your hymns and canticles, being deeply moved by the sweet singing of your Church.   Those voices flowed into my ears, truth filtered into my heart and from my heart surged waves of devotion.   Tears ran down and I was happy in my tears.

Indeed, who could fail to be moved by those many passages in the psalms which set forth so profoundly the infinite majesty of God, His omnipotence, His justice and goodness and clemency, too deep for words and all the other infinite qualities of His that deserve our praise?   Who could fail to be roused to the same emotions by the prayers of thanksgiving to God for blessings received, by the petitions, so humble and confident, for blessings still awaited, by the cries of a soul in sorrow for sin committed?   Who would not be fired with love as he looks on the likeness of Christ, the redeemer, here so lovingly foretold? His was the voice Augustine heard in every psalm, the voice of praise, of suffering, of joyful expectation, of present distress.

“If there were one million families
praying the Rosary every day,
the entire world would be saved.” 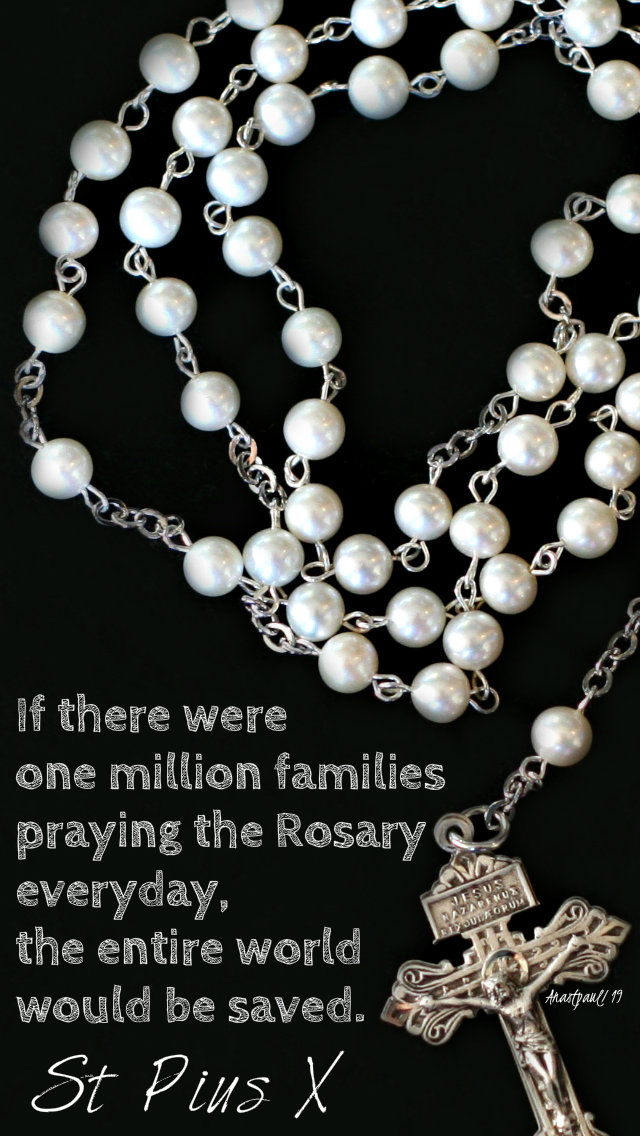 REFLECTION – “You think that the fight for power in the Church is something of these days, eh? It started there, right beside Jesus”.   Yet in the Church it should not be so, (Mt 20:25-26), Jesus explains the true meaning of power.   “But Jesus summoned them and said, “You know that the rulers of the Gentiles lord it over them and the great ones make their authority over them felt.   But it shall not be so among you.   Rather, whoever wishes to be great among you shall be your servant.” 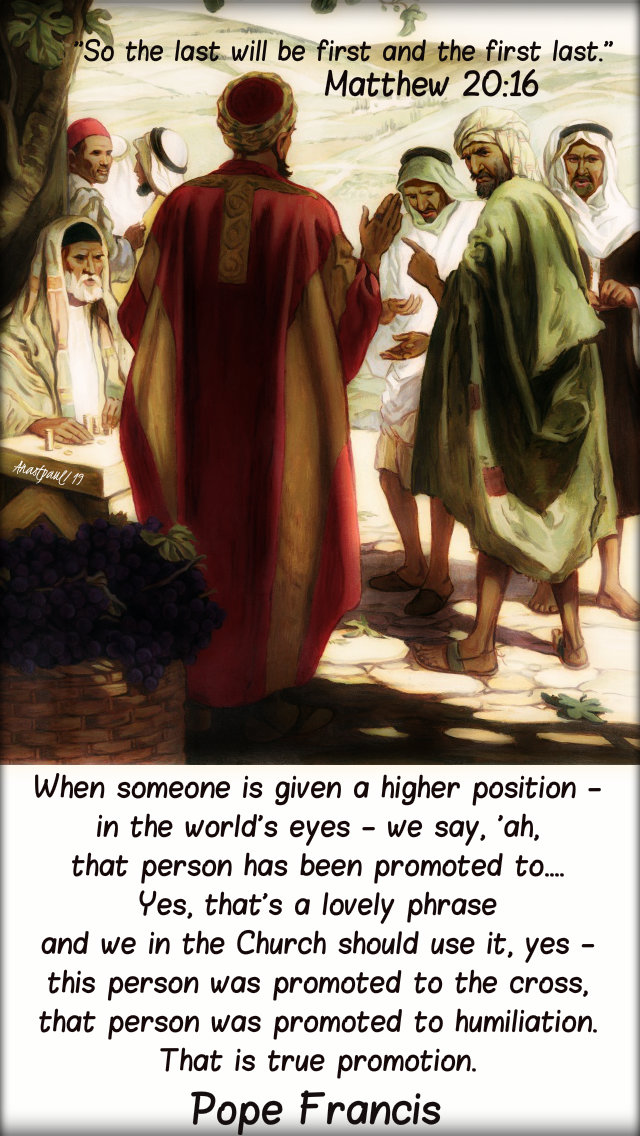 PRAYER – Lord God, You filled the saints with strength and courage and gave them the knowledge of unity with You. Grant, we pray, that in imitation of St Pope Pius X, we may defend the Catholic faith and renew all things in Christ, Your Son. Help us Holy Father, to follow the example of St Pius and finally inherit eternal life ,with You and all the saints. We make our prayer through Christ, our Lord with the Holy Spirit, one God forever, amen. 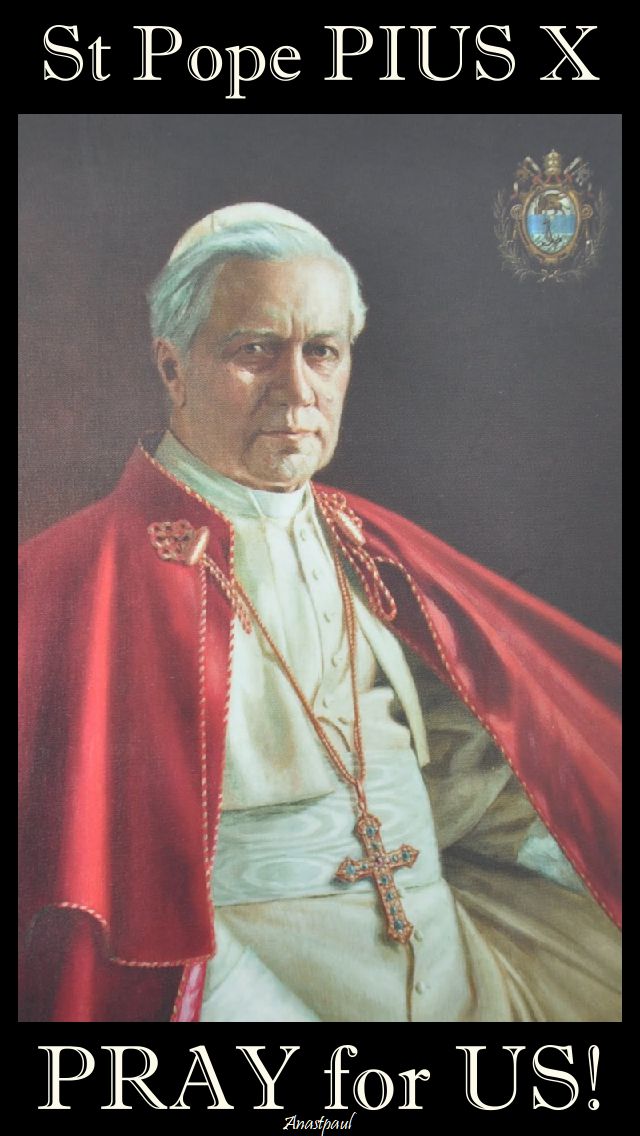 Our Morning Offering – 21 August – Wednesday of the Twentieth week in Ordinary Time, Year C and The Memorial of St Pope Pius X (1835-1914)

O Holy Spirit of Light and Love,
to You I consecrate my heart,
mind and will
for time and eternity.
May I be ever docile
to Your Divine inspirations
and to the teachings
of the Holy Catholic Church
whose infallible guide You are.
May my heart be ever inflamed
with the love of God and love of neighbour.
May my will be ever in harmony with Your Divine Will.
May my life faithfully imitate the life and virtues
of our Lord and Saviour Jesus Christ.
To Him,
with the Father,
and You, Divine Spirit,
be honour and glory forever.
Amen. 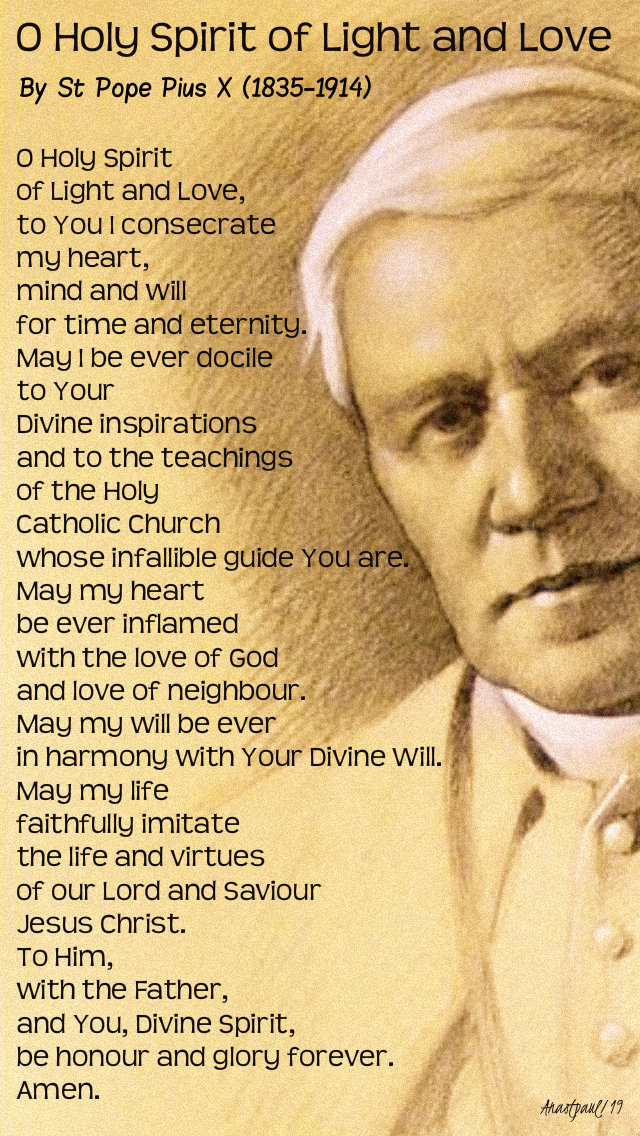 Saint of the Day – 21 August – Saint Abraham of Smolensk (Died c 1222) Monk, Abbot, Priest, apostle of the poor, Preacher, Biblical scholar and spiritual adviser – born in the 12th century at Smolensk, Russia and died in c 1222 at Smolensk, Russia of natural causes. Patronage – Smolensk.  He is venerated as a saint in both the Eastern Orthodox Church and the Roman Catholic Church.   Pope Paul III Canonised him as a saint in 1549.

Abraham was born in Smolensk, Russia during the mid twelfth century to a wealthy family, a son after twelve daughters.   From childhood he grew up in the fear of God.   He often was in church and had the opportunity to read books.   As an only son, his parents hoped he would marry and continue their illustrious lineage.   However, he sought a different life.

After the death of his parents, he gave away all his wealth to monasteries, churches and the destitute.   He walked through the city in rags, asking God to show him the way to salvation.   Abraham entered the Monastery of the Most Holy Mother of God (Bogoroditskaya Monastery), near Smolensk and accepted tonsure as a monk.   He accepted various obediences at the monastery and fervently occupied himself with the copying books and culling spiritual riches from them.

Prince Roman Rostislavich of Smolensk established a school in the city, at which not only Slavonic but also Greek and Latin books were used to teach.   The prince also had a large collection of books, which the Monk Abraham use.   He became very popular among the laity as he worked for the sick and troubled.   He also became a noted biblical scholar in pre-Mongol Russia.   He lived austerely and preached on the Last Judgement, while developing a genuine apostolate for the sick and poor of the region.

He lived as an ascetic for more than 30 years at the monastery, when in the year 1198 Bishop Ignatius of Smolensk persuaded him to accept the dignity of priest.   From his ordination Fr Abraham celebrated daily the Holy Mass and fulfilled the obedience of clergy not only for the brethren but also for the laypeople.

Fr Abraham had been characterised as being a man of stern and militant character, who kept the idea of the Last Judgement in the minds of himself and others.   While very popular among the laity, he was less popular among many of the local clergy, who came to view him with enmity and jealousy.   This animosity among the brethren in time reached Bishop Ignastius and after five years he was compelled to transfer to the Cross-Exaltation Monastery in the city of Smolensk.

At the poor monastery, Fr Abraham began a program to improve it.   From the offerings by the faithful, he embellished the cathedral church with icons, curtains and candle-stands.   On two icons that he himself inscribed were themes that most of all concerned him.   One depicted the dreaded Last Judgement and, on the other, the suffering of the trials of life.   He was strict both towards himself and towards his spiritual children. He preached constantly in church and to those who came to him in his cell, conversing with rich and poor alike.   An ascetic, lean and pale from extreme toil, in priestly garb he resembled in appearance St Basil the Great.

His unpopularity among the city notables and the clergy remained and they soon demanded of Bishop Ignatius that he bring Fr Abraham to trial, with accusations of the seduction of women and the tempting of his spiritual children.   But even more terrible were the accusations of heresy and reading of forbidden books, for which his enemies proposed to drown or burn him.   At the trial before the prince and the bishop, Fr Abraham rebutted all the false accusations.   But despite his defence, he was suspended as a priest and returned to his former monastery of the Most Holy Mother of God.

However, the city soon faced a terrible drought and the citizens of Smolensk demanded that Fr Abraham be restored.   This clamour for reinstatement led to a second investigation by Bishop Ignatius, one that cleared his name.   Only after Bishop Ignatius acquitted Fr Abraham, lifting his suspension and permitting him to serve and preach again, did the rain again fall on the Smolensk lands, ending the drought.

Bishop Ignatius built a new monastery, in honour of the Placing of the Robe of the Most Holy Mother of God to which he entrusted its guidance to Fr Abraham.   It was to this monastery that Bishop Ignatius, now the spiritual friend of Fr Abraham, himself retired because of his advanced age.   Many brethren desired to enter under the guidance of Fr Abraham but he examined them very intensely and only accepted those after great investigation, so that at his monastery there were but seventeen brethren.   Fr Abraham, after the death of Bishop Ignatius even more so than before, urged the brethren to reminisce about death and to pray day and night, that they be not condemned in the Judgement by God.

St Abraham died about the year 1222, having spent 50 years as a Monk.   Already at the end of the thirteenth century a service to him had been compiled by his student and disciple, the Monk Ephrem.   The Mongol/Tatar invasion, seen as the wrath of God for sin, not only did not stifle the memory of St Abraham of Smolensk but rather, was a reminder to people of his calling to repentance and recollection of the dreaded Last Judgement.

Our Lady of Knock:  Our Lady, Saint Joseph and Saint John the Evangelist appeared in a blaze of light at the south gable of Saint John the Baptist Church, Knock, County Mayo, Ireland.   They appeared to float about two feet above the ground and each would occassionally move toward the visionaries and then away from them.   The Blessed Virgin Mary was clothed in white robes with a brilliant crown on her head.   Where the crown fitted to her brow, she wore a beautiful full-bloom golden rose. She was praying with her eyes and hands raised towards Heaven.  Saint Joseph wore white robes, stood on Our Lady’s right and was turned towards her in an attitude of respect.   Saint John was dressed in white vestment, stood was on Mary’s left and resembled a bishop, with a small   mitre. He appeared to be preaching and he held an open book in his left hand. Behind them and a little to the left of Saint John was a plain altar on which was a cross and a lamb with adoring angels.   The apparition was witnessed by fifteen people. Miraculous healings were reported soon after in the area and it is now a major pilgrimage destination.   Patronage – Ireland.