An excerpt from his treatise, The Confessions

Urged to reflect upon myself, I entered under Your guidance into the inmost depth of my soul.   I was able to do so, because You were my helper.  On entering into myself I saw, as it were with the eye of the soul, what was beyond the eye of the soul, beyond my spirit: Your immutable light.   It was not the ordinary light perceptible to all flesh, nor was it merely something of greater magnitude but still essentially akin, shining more clearly and diffusing itself everywhere by its intensity.   No it was something entirely distinct, something altogether different from all these things and it did not rest above my mind as oil on the surface of water, nor was it above me as Heaven is above the Earth.   This light was above me because it has made me, I was below it because I was created by it.   He who has come to know the truth knows this light.

O Eternal truth, true love and beloved eternity.   You are my God.   To You do I sigh day and night.   When I first came to know You, You drew me to Yourself, so that I might see that there were things for me to see but that I myself was not yet ready to see them. Meanwhile, You overcame the weakness of my vision, sending forth most strongly, the beams of Your light, and I trembled at once with love and dread.   I learned that I was in a region unlike Yours and far distant from You and I thought I heard Your voice from on high:  “I am the food of grown men, grow then and you will feed on Me.   Nor will you change me into yourself like bodily food but you will be changed into Me.”

I sought a way to gain the strength which I needed to enjoy You.   But I did not find it until I embraced the mediator between God and men, the man Christ Jesus, who is above all, God blessed for ever.   He was calling me and saying – I am the way of truth, I am the life.   He was offering the food which I lacked the strength to take, the food He had mingled with our flesh.   For the Word became flesh, that Your wisdom, by which You created all things, might provide milk for us children.

Late have I loved You, O Beauty ever ancient, ever new, late have I loved You! You were within me but I was outside and it was there that I searched for You. In my unloveliness I plunged into the lovely things which You created.   You were with me but I was not with You.    Created things kept me from You, yet if they had not been in You they would not have been at all.   You called, You shouted and You broke through my deafness.   You flashed, You shone and You dispelled my blindness.   You breathed Your fragrance on me, I drew in breath and now I pant for You.   I have tasted You, now I hunger and thirst for more.   You touched me and I burned for Your peace.

St Augustine, Pray for Us! 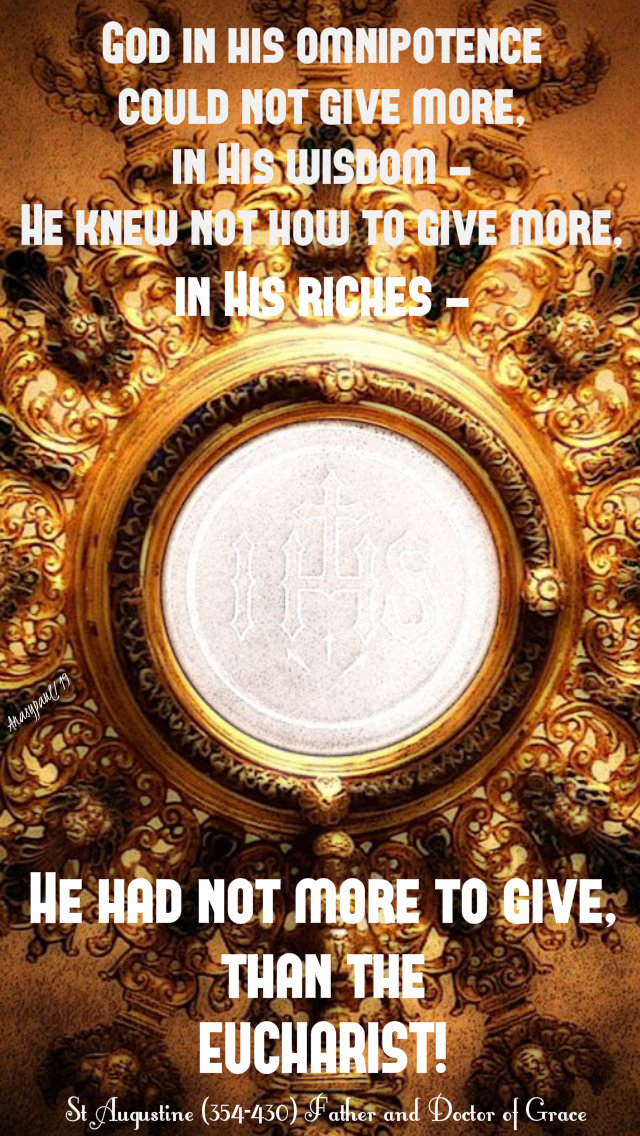 “I will suggest a means whereby
you can praise God all day long, if you wish.
Whatever you do,
do it well
and you have praised God.” 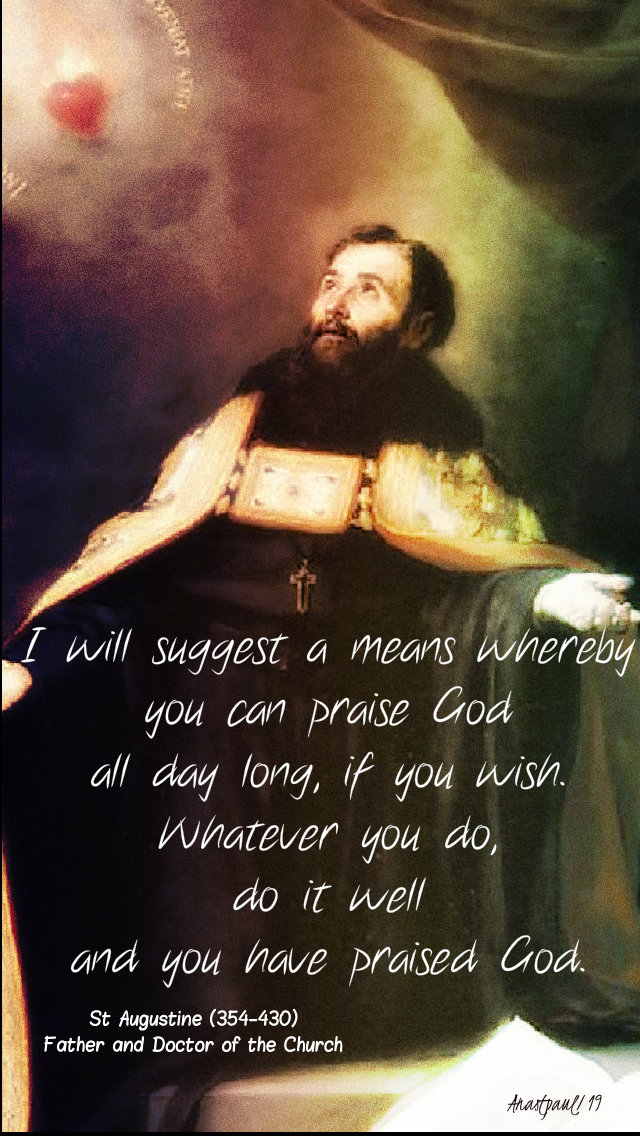 “One of the holiest works,
one of the best exercises of piety
which we can practice in this world,
is to offer sacrifices,
alms
and prayer
for the dead.” 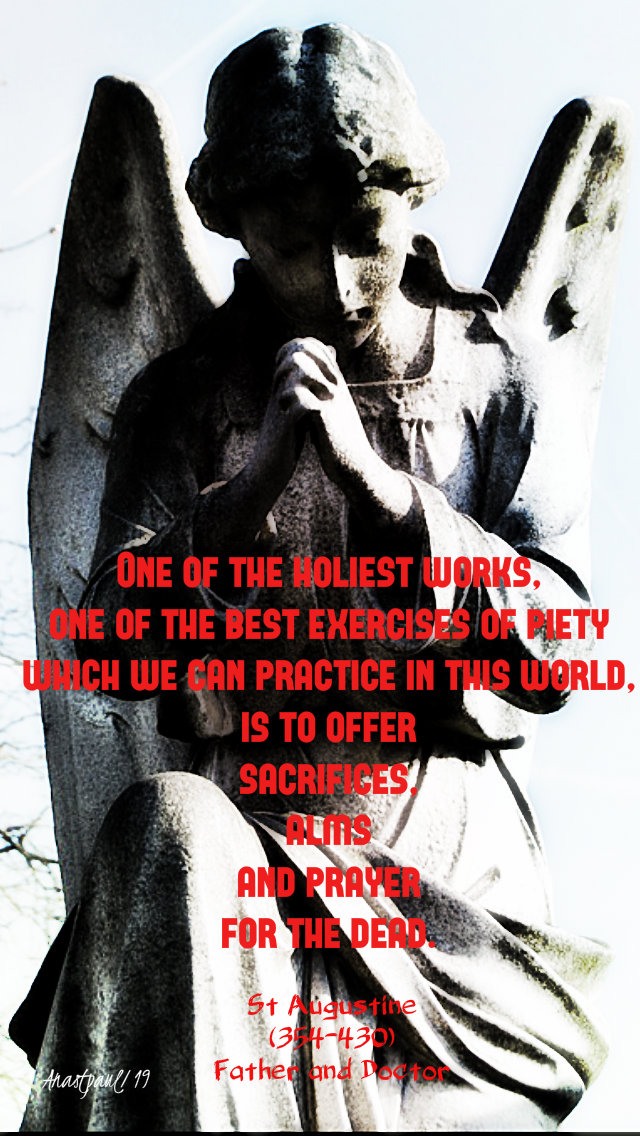 “It was pride,
that changed angels
into devils;
it is humility
that makes men
as angels.” 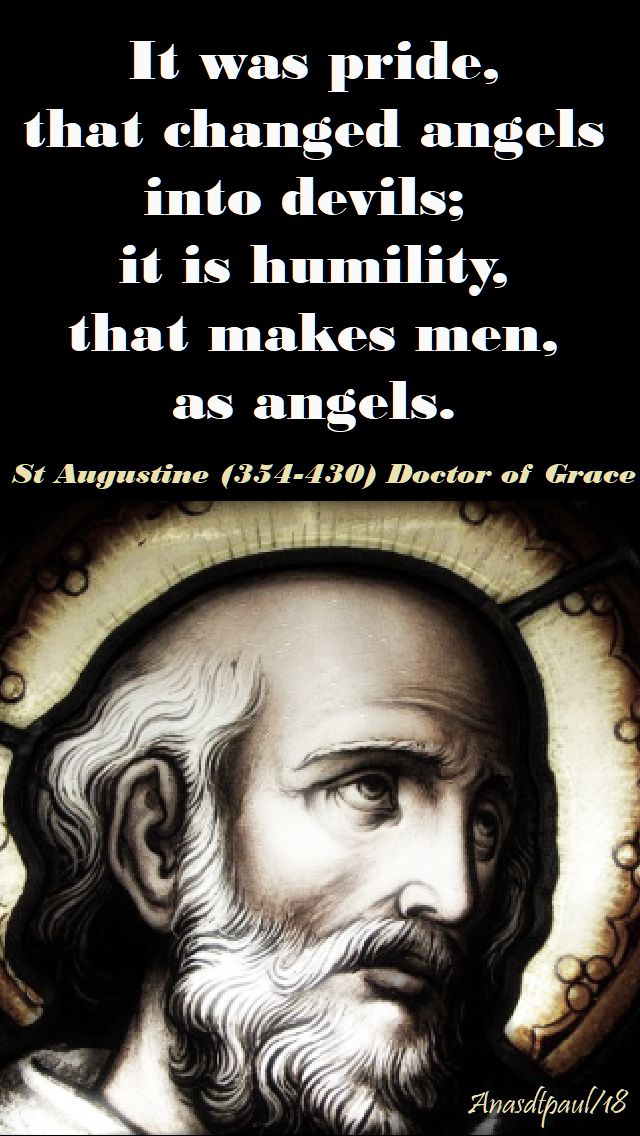 “He need not fear anything
nor be ashamed of anything,
who bears the
Sign of the Cross
on his brow.”

“Woe to you, scribes and Pharisees, hypocrites! for you are like whitewashed tombs, which outwardly appear beautiful but within they are full of dead men’s bones and all uncleanness.” … Matthew 23:27

REFLECTION – “You are before God.   Question your heart, see what you have done and what you have been yearning for there—your salvation or the windy praise of men.   Look within, for a person cannot judge one whom he cannot see.   If we are assuring our heart, let us assure it in His presence.
“Because if our heart thinks badly”—that is, if it accuses us within, because we aren’t acting with the spirit with which we should be acting —“God is greater than our heart, and he knows all things” (v.20).
You hide your heart from man – hide it from God if you can.   How will you hide it from Him to whom it was said by a certain sinner in fear and confession:  “Where shall 1 go from your spirit, and where shed!  I flee from your face?”…  For where does God not exist? “If,” he said, “I go up to heaven, you are there; if I go down to hell, you are present” (Ps 139[138]:7-8).   Where will you go?   Where will you flee?   Do you want to hear some advice?   If you want to flee from Him, flee to Him.   Flee to Him by Confessing, not from Him by hiding, for you cannot hide but you can Confess.   Tell Him. “You are my refuge” (Ps 32[31]:7) and let there be nursed in you the love that alone leads to life.”…St Augustine (354-430) – Doctor of Grace

PRAYER – Renew in Your Church, we pray , O Lord, the spirit with which You endowed Your Bishop Saint Augustine, that, filled with the same spirit, we may thirst for You, the sole fount of true wisdom and seek You, the author of heavenly love. Through our Lord Jesus Christ, Your Son, who lives and reigns with You in the unity of the Holy Spirit, one God, forever and ever. St Augustine, pray for us! Amen

Our Morning Offering – 28 August – Wednesday of the Twenty-first week in Ordinary Time, Year C and The Memorial of St Augustine of Hippo (354-430) – Doctor of Grace and one of the original Four Fathers & Doctors of the Latin Church

Go on, O Lord and act,
stir us up and call us back,
inflame us and draw us to Thee,
stir us up and grow sweet to us,
let us now love Thee,
let us run to Thee.
Are there not many men …
who, out of a deeper pit of darkness..
return to Thee–who draw near to Thee
and are illuminated by that light
which gives those
who receive it power from Thee
to become Thy sons?
Amen 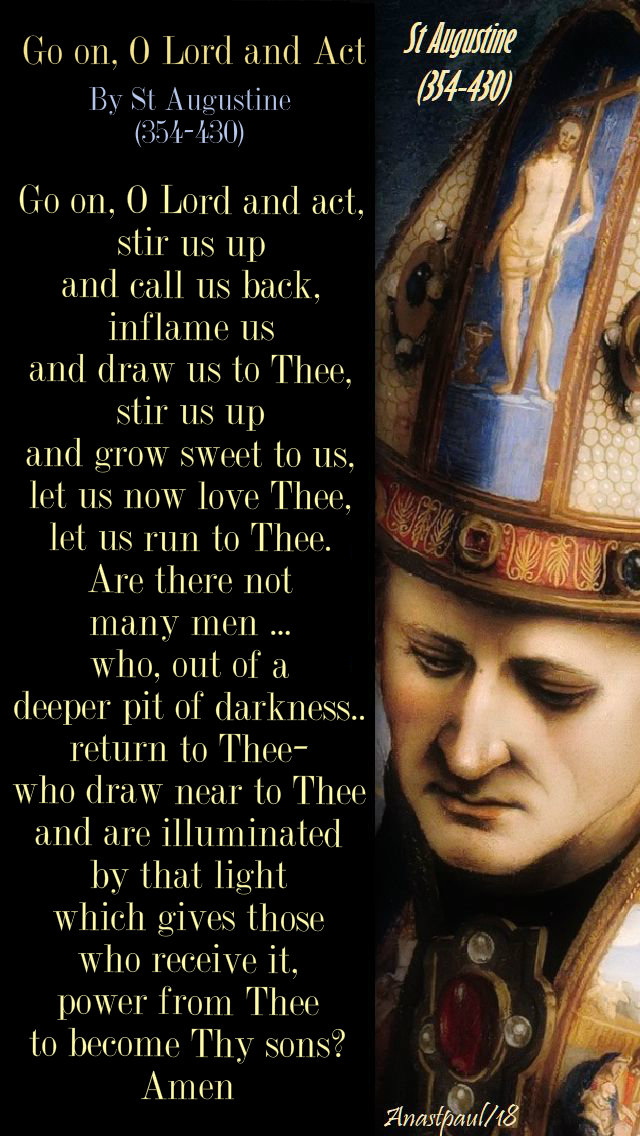 Vicinius, who, according to tradition, was the first Bishop of the diocese of Sarsina (now joined to Cesena), is considered to be of Ligurian origin.   He retired as a hermit on a mountain that now bears his name.   While priests and people of Sarsina were gathered to choose the bishop, a divine sign appeared on the top of the mountain.   Thus the solitary Vicinio became pastor of the Romagna community, from the early 4th century to 330, the date of his death  . His charisma was to cast out demons and heal the faithful from physical or spiritual illness through a iron collar that he had placed around his neck.

The historical research on St Vicinius stops at an anonymous 12th century manuscript, called Lectionarium.   This is almost certainly the transcription of previous written notes on the life of St Vicinius, dating back at least a century before.   From this manuscript we learn that Vicinius is believed to have come from Liguria but it could also originate from the districts of the Savio area.   In the wake of the more consolidated tradition, we believe he came from Liguria in the period between the third and fourth centuries.

Vicinius, driven by the love of solitude, dedicated himself to prayer, meditation and penance in a solitary place that tradition identifies with Monte St Vicinius, located about six kilometers from Sarsina.

The holy life of Vicinius was of such satisfaction to the Lord, that He chose him pastor of the Christian community established in Sarsina.   Prayer and penance had certainly increased the zeal for the House of the Lord and Vicinius devoted himself to structuring the divine flock by spreading the Gospel even in the most inaccessible areas of the Diocese.   The historical records of the bishops of Sarsina, places him first bishop of the diocese and affirms that he was the leader of the Church until 28 August 330, the day of his birth in heaven.

Penance and prayer, evangelisation and conduct of the people of God are the cornerstones to which Saint Vicinius had chained his life and are also the high road he chose to carry out his personal call to holiness.

Each saint embodies a particular charism and St Vicinius expresses the power of God in the fight against the evil one in the spiritual battle of adhesion to the Gospel.

His entry into the ranks of the blessed with death to eternal life occurred after twenty-seven years and three months of episcopal ministry in Sarsina.   Even before his death, the intercession of St Vicinius proved to be powerful in favour of those who carried infirmities in body and spirit.   Many of them used to come to him when they suffered from ailments in the body, even very serious ones, anxieties, fatigues, pains, upset but above all, when existential and spiritual problems were manifested and through the use of a iron collar that the Saint himself used, by placing it around the neck of the faithful, they manage to find peace and serenity.

We can still read in the Lectionarium of a beggar who attributed a high market value to the collar of Saint Vicinius, he stole it and fled.   He reached the river Savio, trying to get as far away as possible but in reality, he spent the night running, only to find himself in the morning, at the same point of the river at which he had begun.  Caught in fear and remorse, battered and wounded, he threw the collar into a river vortex, where it was found three days later floating near the shore.

St Vicinus relics are kept in the Sarsina Cathedral in the Chapel of St Vicinius.   The miraculous collar is there too and it still brings many pilgrims seeking healing. 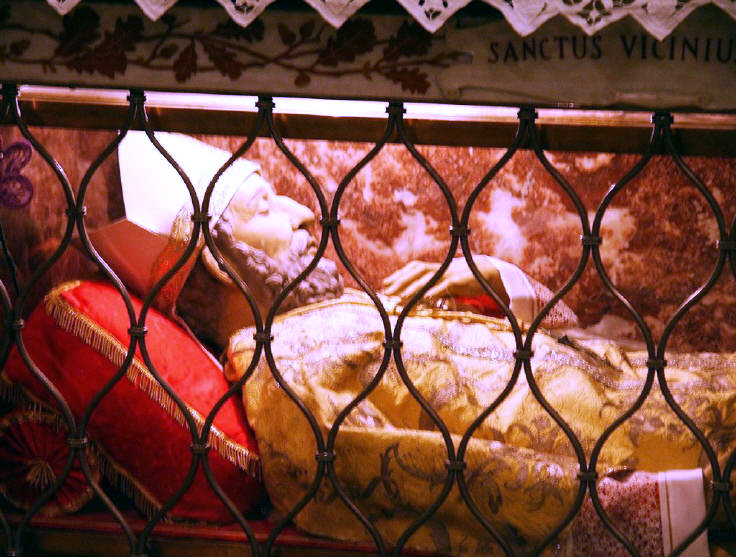 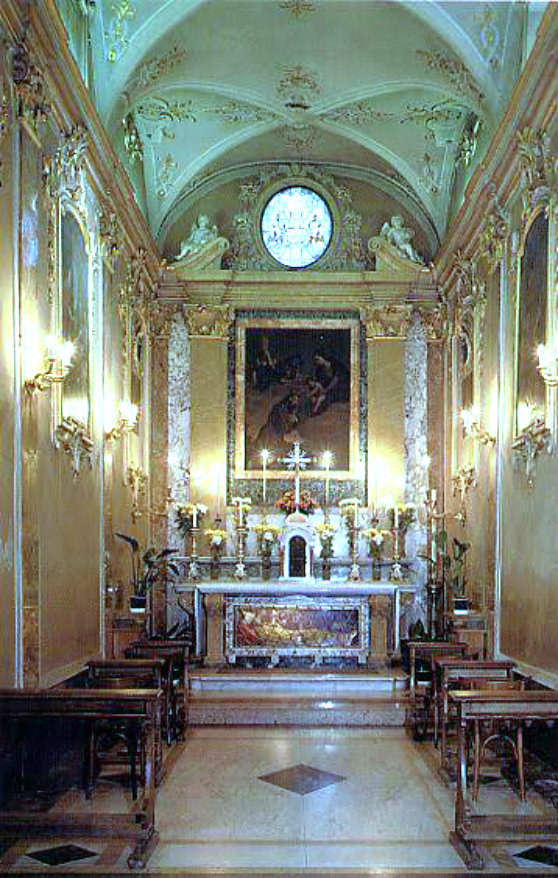 St Augustine of Hippo (354-430) – Doctor of Grace and one of the original Four Fathers & Doctors of the Latin Church(Memorial)
Wonderful St Augustine here:   https://anastpaul.wordpress.com/2017/08/28/saint-of-the-day-28-august-st-augustine-354-430-doctor-of-grace-and-one-of-the-original-four-fathers-doctors-of-the-latin-church/