Saint of the Day – 8 November – Saint Godfrey of Amiens OSB (1066–1115) Bishop of Amiens, Reformer, Apostle of Prayer and Charity, Penitent.

St Godfrey was the son of Frodon, a noble citizen in a small town.   He was raised from the age of 5 in the Benedictine abbey of Mont-Saint-Quentin where his godfather Godefroid was the Abbot.   He immediately donned a Benedictine habit and lived as a tiny monk.

In his youth he always gave the better part of his meals to the poor and sometimes did not make his appearance at all in the refectory, spending his time in some private prayer and he often spent a great part of the night in prayer.   The streams of tears which frequently watered his cheeks at his prayers were proofs of the tender compunction and devotion of his soul.   He took his vows as a Benedictine Monk when he came of age and then proceeded with his studies for the Priesthood.   He was ordained a Priest by Bishop Radbod II of Noyon, at the age of 25.

In 1096, he was made Abbot of Nogent-sous-Coucy, in the Diocese of Rheims, in the province of Champagne.   When he arrived, the place was overrun by weeds and housed only six nuns and two children.   He rebuilt, restored and revitalised the Abbey, bringing people to the Order of St Benedict and order to the people.

His palace was truly the house of a disciple of Christ.   Everyday he served, at his ow  n table, poor people and washed their feet.   To attend the most loathsome lepers seemed his greatest pleasure.   St Godfrey was noted for his rigid austerity with himself, those around him and in his approach to his mission as  Bishop.  He was an enforcer of clerical celibacy.   He was also a fierce lifelong opponent of drunkenness and simony, which led to an attempt on his life.

For most of his time as Bishop, he wished to resign and retire as a Carthusian monk. In 1114 he moved to a monastery but a few months later his people petitioned for his return and he bowed to their request.

He also took part in the Council of Chálons.

As he was going to Rheims to confer with his metropolitan upon certain matters of importance, he was taken ill of a fever on the road and, having received the holy sacraments, joyfully departed to our Lord on 8 November, in 1115, in the Abbey of St Crispin at Soissons and was there interred.

His name is honoured in the Roman Martyrology.   His life was written by Nicholas, a monk of Soissons, in the same century. 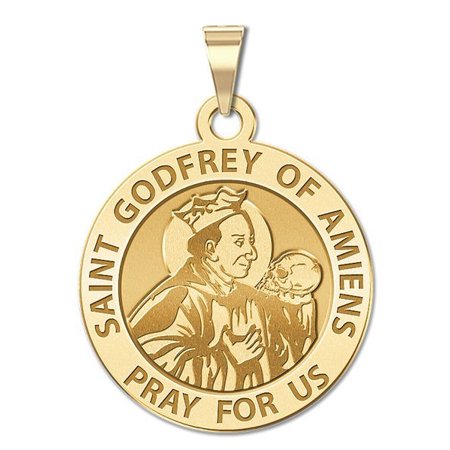