Saint of the Day – 4 January – Saint Angela of Foligno TOSF (1248-1309) known as the “Mistress of Theologians” – Wife, Mother, Widow, Religious, Mystic, Writer, Third Order Franciscan, Foundress of a religious community, which refused to become an enclosed religious order, so that it might continue her vision of caring for those in need.   It is still active.  Patronages – against sexual temptation, against temptations, assistance with the death of children, people ridiculed for their piety, widows.

Angela’s birth date, which is not known with certainty, is often listed as 1248.   She was born into a wealthy family at Foligno, in Umbria.   Married, perhaps at an early age, she had several children.   Angela reports that she loved the world and its pleasures.   Around the age of 40, she reportedly had a vision of St Francis and recognised the emptiness of her life.   From that time, she began to lead a life devoted to higher perfection.

Angela of Foligno is a model for people who want to simplify their lifestyle. As a young adult she reveled in luxury and sensuality. She married a rich man of Foligno, Italy, and used his wealth to indulge herself in possessions. And her impetuous temperament nudged her into sinful behaviour.

However in 1285, Angela experienced a surprising conversion. 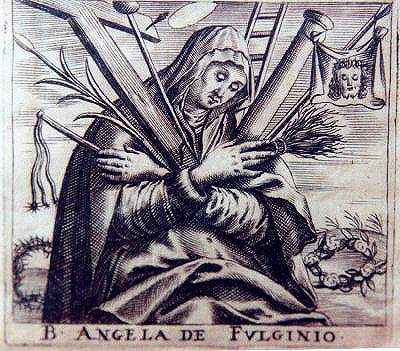 One day she wept bitterly and confessed a serious sin to a friar, who absolved her.   Then she embarked on a life of prayer and penance.   Over the next six years, step-by-step she divested herself of her attachments to people and things.

In 1288 her mother, husband and sons died of a plague.   As a widow, Angela was free to concentrate on her pursuit of holiness  . She modelled herself on St Francis of Assisi and joined the Franciscan Third Order in 1291.   Like Francis, Angela expected to meet Christ in the poor.   For instance, on Holy Thursday, 1292, she and a companion went to care for lepers at the hospital in Foligno.   After they had washed a man who was badly decomposed, they drank some of the bathwater.   The experience so moved Angela that she says all the way home she felt “as if we had received Holy Communion.”

Angela of Foligno was a visionary who, like St Catherine of Siena, regularly fell into  trances.   From 1292 to 1296 she dictated her revelations to Brother Arnold, her confessor.   Angela recorded 30 steps of her tortured spiritual journey, which always seemed to blend awareness and absence of God, certitude and doubt and joy and agony.

A small band of disciples gathered around the saint.   She led them wisely, instructing them in basic Christian living.   This excerpt from her Instructions, advocates prayer and meditation on Scripture:

And pray in this fashion – always reading the Book of Life, that is, the life of the God-man, Jesus Christ, whose life consisted of poverty, pain, contempt and true obedience. 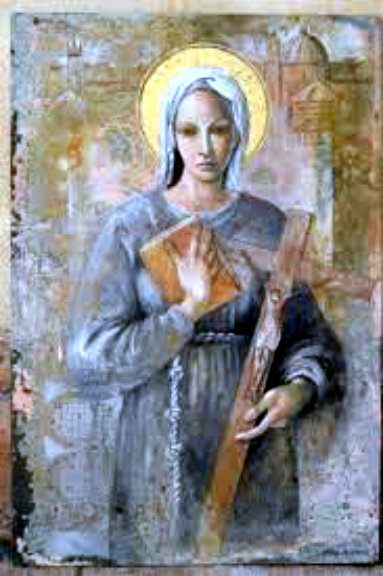 At Christmas, 1308, Angela told her companions she would die shortly.   A few days later Christ appeared to her, promising to come personally to take her to heaven.   She died in her sleep on 3 January 1309, surrounded by her community.   Her remains repose in the Church of St Francis at Foligno and many miracles have been recorded there. 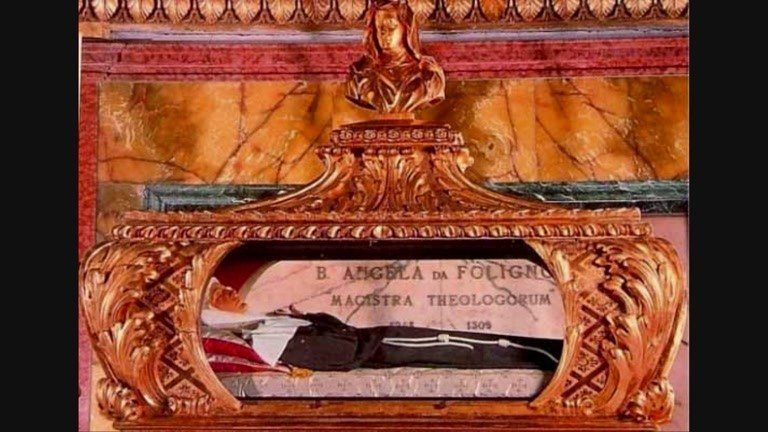 Considered a “great medieval mystic,” Angela is said to have received mystical revelations, which she dictated to a scribe in the late 13th century.   These accounts are contained in a compilation of two works, her Book of Visions and Instructions.

Pope Clement XI approved the veneration paid to her over the centuries in his Beatification of her on 11 July 1701 and Pope Francis extended the veneration to all the Church on 9 October 2013, declaring her a saint by equipollent Canonisation, recognising the validity of the long-standing veneration of her.

Her feast day is celebrated by the Third Order of Saint Francis, both Secular and Regular, on 4 January (7 January in the United States).   Although the community she founded was not recognised as a religious institute until the 20th-century, she is honoured as a religious. 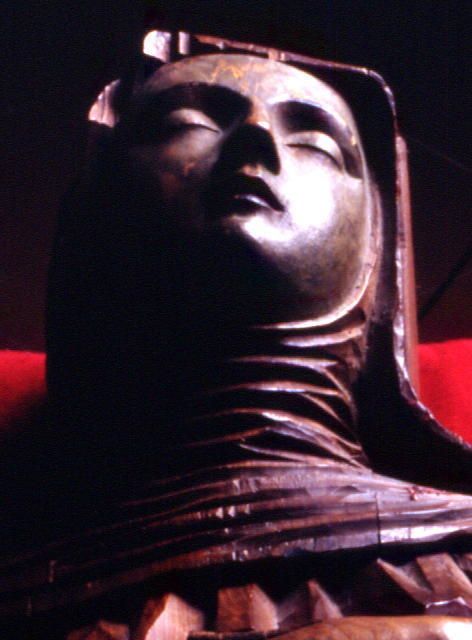