Saint of the Day – 27 January – Blessed George Matulaitis MIC (1871-1927) Archbishop of Vilnius from late 1918 until his resignation in 1925, Apostolic Nuncio in Lithuania, Founder of the Congregation of the Poor Sisters of the Immaculate Conception of the Blessed Virgin Mary and the Handmaids of Jesus in the Eucharist, Professor, Spiritual Director – he served as the Superior-General of the Marian Fathers from 1911 until his death and is known as the “Renovator of The Marians.”   Born as Jurgis Matulaitis-Matulevičius on 13 April 1871 at Lugine, Lithuania and died on 27 January 1927 of appendicitis at Kaunas, Lithuania.   Patronages – Teachers, Sisters of the Immaculate Conception, Handmaids of Jesus in the Eucharist.   He worked in secret to revive the Marian Fathers after the Russian authorities suppressed all religious orders and he even relinquished his teaching position to better dedicate himself to that secret revival.   He was a noted teacher and spiritual director who set up other branches of the order, in places such as Switzerland and the United States, far from Russian authorities.

George was born in the village Matulaitis Lithuanian Lugine  on 13 April 1971, the last of the eight children of Andrew and Ursula Matulaitis.   At age ten he was orphaned and his older brother, John, became his guardian.   After after elementary school he was put to work in the countryside.   At 18 years, in 1889, he followed the brother John Matulewicz to Poland, where the family name changed from Matulaitis in Matulewicz.

He completed his higher studies at the seminary in Kielce and then in Warsaw and finally at Roman Catholic University in Petersburg, where he was Ordained as a Priest on 20 November 1898.   In June 1899 he became a Master in Theology, in December he enrolled at the University of Freiburg in Switzerland, where in 1903 he obtained a degree in theology, with a brilliant thesis on which was published in Krakow.

He was posted immediately as a professor and held the chair of Latin and Literature in the Canon Law Seminar Kielce, from 1902-1904 and from 1907 to 1909 in Dogmatic Theology and Sociology at the Catholic Seminary in Petersburg.

In 1909 while he was still professor at the Theological Academy, 38 years old and with a promising career ahead of him, Matulaitis made a momentous decision.   He decided to become a religious, to follow more closely in the footsteps of Christ.   Having received permission from Rome, he made the three vows of poverty, chastity and obedience in a private chapel in Warsaw.   At the same time, his close friend and fellow professor, Francis Būčys, was received into the novitiate.   This was the beginning of the revival of the Marian Congregation.   Closed down by the Russian government, it had only one surviving member.   Matulaitis was convinced that God was leading him to resurrect this dying community and infuse it with new life. 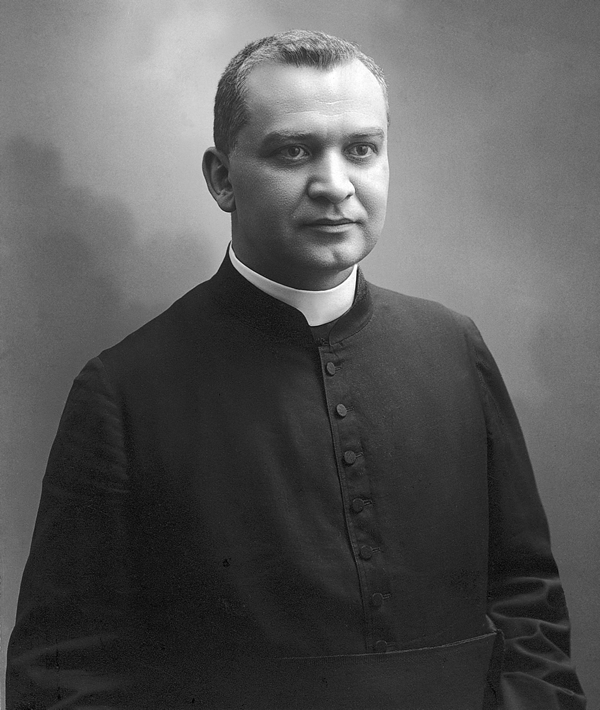 The Marian Fathers were well known to him — they worked in his parish church at Marijampole in Lithuania.   He had been baptised by one of their generals.   Now he resolved to revive and prepare them for an apostolate in the modern world.   He gave up lecturing on sociology and taught dogmatic theology instead.   He began to rewrite the Constitutions and at the same time directed his two novices.   In the fall of 1910 he began to keep a journal in which he recorded his thoughts, inspirations and resolutions.

In 1911 Matulaitis was elected superior general of the Marians and remained in this position until his death.   He was also novice master since they were so few.   That same summer the novitiate was transferred to Fribourg, Switzerland, for St Petersburg proved to be too dangerous – the Russian secret police had been conducting raids and searches for secret religious organisations.   Under cover of the life of the University of Fribourg, Matulaitis hoped that the novitiate would be safer and grow more rapidly.

In 1913 he and two young Lithuanian Marians travelled to the United States to start a mission in Chicago.   In 1915, unable to leave Poland because of the war, Matulaitis gathered the Polish Marians together at a monastery outside Warsaw.   This was the beginning of the Polish province.   During this period the Marians and several sisters cared for a number of war orphans.   Matulaitis himself would often go into German-occupied Warsaw to beg for provisions for the children.   He would often return in the evening sitting on a wagonload of coal or potatoes.

A number of interesting stories circulated in the area about the young priest and professor who was not afraid of the Germans.   Once he went to a German official to ask for cots for the children.   “You are a priest, you should trust in divine Providence.   Why are you bothering me?!” barked the German.   “That is true,” replied Matulaitis quietly “but Providence often works through good people.”   Shamefaced, the German wrote out an order for the cots.   However, the priest kept coming back.   He was cursed at for being an infernal nuisance.   Matulaitis humbly listened to the tirade, then said:  “All that is for me but what do you have for the children?”

Serving the poor was a priority in all the religious communities that Matulaitis founded. In the spring of 1918 he went to Lithuania to restore the Marian monastery in Marijampole and to start a novitiate.   In the fall of that same year he founded a Lithuanian community for women, the Sisters of the Immaculate Conception, popularly known as the Sisters of the Poor.   Several years later he founded another religious community for women in Belorussia, the Servants of Jesus in the Holy Eucharist.   All these communities are still active.

Despite his own wishes to remain a simple religious, in the fall of 1918 George Matulaitis was appointed Bishop of Vilnius by Pope Benedict XV.   He was consecrated in Lithuania, at the cathedral in Kaunas on 1 December and the installation ceremonies took place in the Vilnius cathedral on 8 December.   He was not well known to the people of Vilnius and was very much aware of the difficulty of his mission.   In his inaugural sermon he presented himself to his flock humbly and sincerely:   “I stand before you a stranger and therefore, first of all, I ask one thing of you — to regard me as the servant of Christ who has been given you to show you the way to heaven and to guide you to eternal happiness.   From now on, we shall live together as one big spiritual family of which I am to be the father and head, as we move forward along our wearisome spiritual journey.”

The years that followed were not easy for the new bishop – the territory of Vilnius in the three following years changed hands and was occupied by eight different governments, German, Russian Bolshevik, Polish, Lithuanian, all of whom called him to interrogation. Because of his refusal to take sides or to promote the interests of one political party or nation against another, Bishop Matulaitis was criticised, attacked and denigrated.   Yet, he remained gracious and cordial even to those who publicly vented their antagonism or snubbed him personally.   In some cases his goodness won them over. 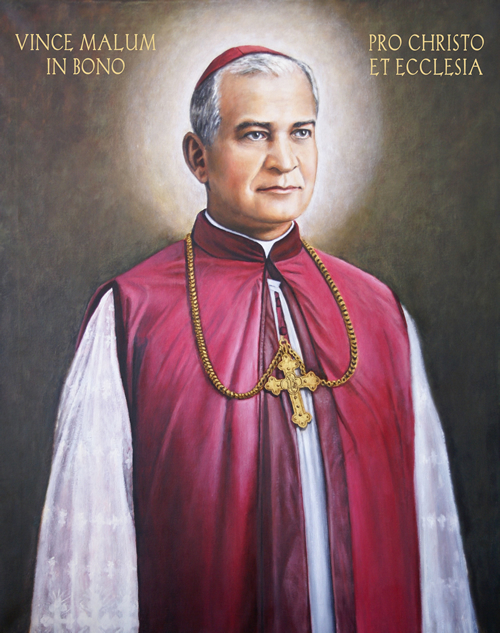 In the summer of 1925 Matulaitis’ resignation from the diocese of Vilnius was accepted by Pope Pius XI, his personal friend and colleague.   Poland had signed its Concordat with the Vatican and Vilnius was going to be made an archdiocese.   Matulaitis was well aware that he had to withdraw.   He quietly left Vilnius and went to Rome where he hoped to establish the Marian generalate and a house of studies.   However, the pope made him titular Archbishop of Adulia and appointed him Apostolic Visitor to Lithuania. 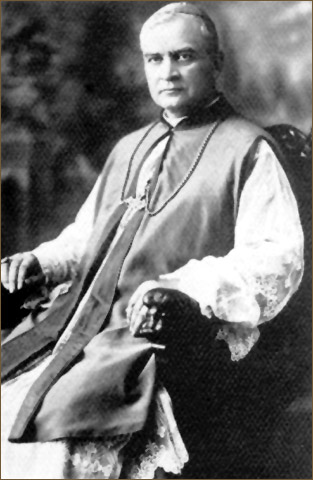 In June he sailed to the United States to attend the International Eucharistic Congress in Chicago.   He also visited 92 Lithuanian parishes and gave over 200 homilies and speeches.   Everywhere he was welcomed with great enthusiasm.   The railway car in which he was travelling was even painted violet in his honour!   Back home, he began work on the Concordat between Lithuania and the Vatican.   However, he did not live to see its completion.   Blessed George, true apostle of his homeland of Lithuania, died after an appendix operation in Kaunas on 27 January 1927 at the age of 56.

Throngs of people came to mourn him, all the church bells of Kaunas pealed a final farewell.   Every national group recognised the enormity of their loss for he had been a father to all.   Thousands attended the funeral.   He was buried in the crypt of Kaunas cathedral but the remains were transferred to his own parish church in Marijampole in 1934.

On 11 May 1982, the Congregation for the Saints issued a decree stating that during his lifetime Archbishop George practised virtues to a heroic degree.  On 28 June 1987, the Holy Father, St John Paul II solemnly Beatified him at St Peter’s Basilica in Rome.

On the occasion of his Beatification, a special repository was made for the remains and an altar constructed.   This has now become a National Shrine where Lithuanians and people from other countries come to pray.