Catholic Devotion for June
JUNE – THE MONTH OF THE SACRED HEART

The Sacred Heart of Love – Hope of a Hopeless World

If there is an age whose sole hope lies in the Sacred Heart of Jesus, it is our own.
The evils committed by mankind today can scarcely be exaggerated.
To mention just a few, these include blasphemy, the destruction of the family through abortion, divorce, euthanasia, widespread pornography, immoral fashions and lifestyles, homosexuality and so on.
As Pope Pius XI once said, the contemporary world is so morally depraved that at any moment it could be plunged into a deeper spiritual misery than that reigning in the world when Our Blessed Redeemer was born.
In consideration of so many crimes, the idea of divine vengeance naturally comes to mind.
When we view this sinful world, groaning beneath the weight of a thousand crises and a thousand afflictions but nevertheless unrepentant, when we consider the alarming progress of neo-paganism, which is on the verge of conquering humanity (in some countries has already done so!) and when, on the other hand, we consider the lack of resolve, foresight and unity among the so-called remnant, we are understandably terrified at the grim prospects of catastrophes that this generation may be calling upon itself.
It seems, that now, we are already facing these catastrophes.

Nevertheless, since God is not only just but also merciful, we pray to the Sacred Heart, that the gates of salvation have not yet been shut against us.
A people unrelenting in its impiety has every reason to expect God’s rigor.  However, He Who is infinitely merciful, does not want the death of this sinful generation but that it “be converted…and live” (Ezech.18:23).
His grace thus insistently pursues all men, inviting them to abandon their evil ways and return to the fold of the Good Shepherd.

God is charity, so the simple mention of the Most Holy Name and Sacred Heart of Jesus evokes love.
It is the infinite, limitless love that drove the Second Person of the Most Holy Trinity to become man.
It is the love manifested in that supreme moment of the Last Supper when, after generously washing the feet of His apostles, He instituted the Holy Eucharist.
It is the love in that last pardon of Dismas, which enabled the dying thief to steal heaven.
Finally, it is the love manifested in the supreme gift of a Heavenly Mother for a wretched humanity!

In venerating the Sacred Heart of Jesus, the Church specially praises the infinite love demonstrated by Our Lord Jesus Christ to men.
Since His Heart is the symbol of love, by venerating His Heart, the Church celebrates Love.

Among the promises made by our Lord to St Margaret Mary was the assurance that, “Those who shall promote this devotion shall have their names written in my Heart, never to be blotted out.” 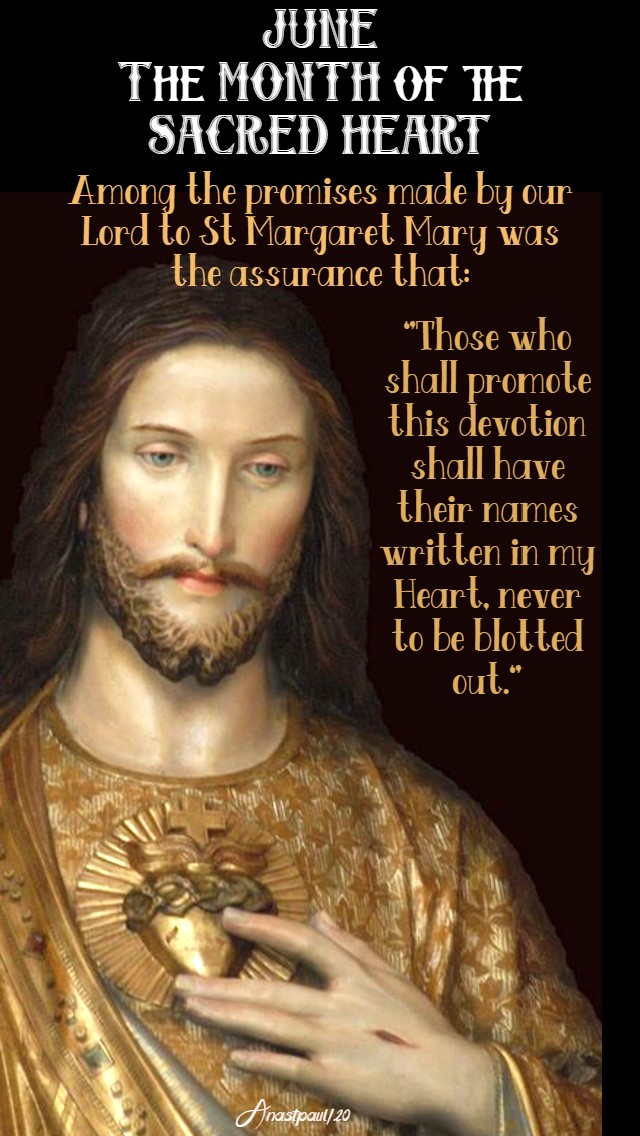