In the church of San Lorenzo in Lucina in Rome, there is a sacred image of the Blessed Mother entitled, LA MADONNA DELLA SANITÀ, or rendered in English as Our Lady of Health.
This ancient image had been lost for centuries but was rediscovered as the structure was being restored in the church during the time of Pope Sixtus V.   It was moved to the main altar above the painting of the Crucifixion by Guido Reni, see below. 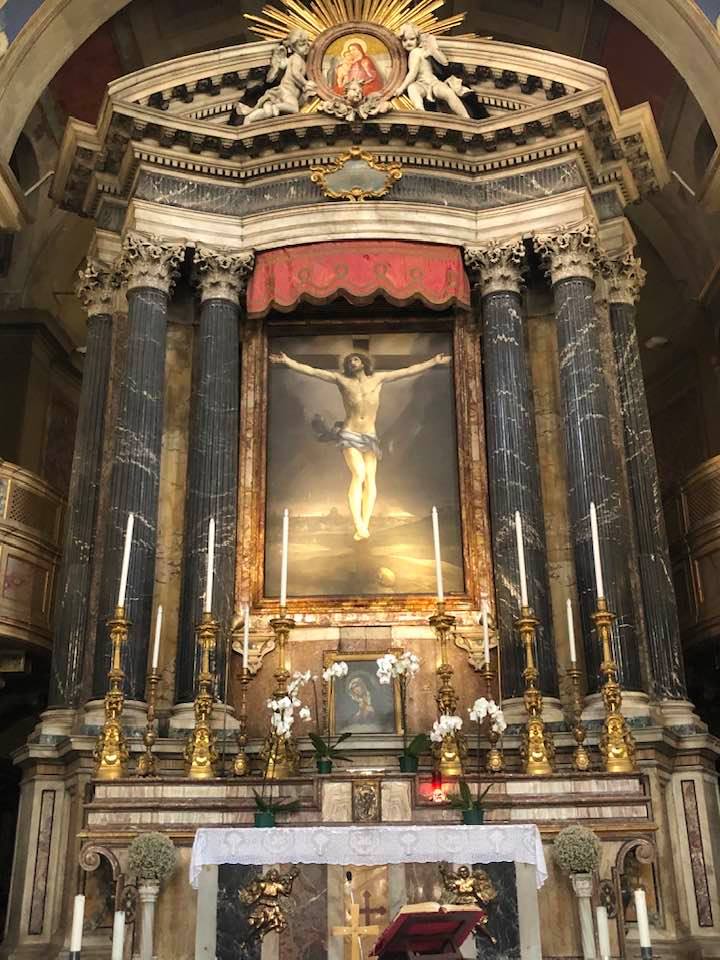 A few years later, Pope Paul V entrusted this church to the Clerics Regular Minor.
His Holiness, who had great esteem for St Francis Caracciolo, spoke to him at length about the Sacred Image of the Madonna, recommending its veneration, entitled Our Lady of Health, in regard to the many graces which were granted to the sick, even during times of plague.
The Clerics Regular Minor promulgated this devotion among the faithful over the years.
In 1867, when a terrible plague afflicted the City of Rome, the faithful of San Lorenzo in Lucina, encouraged by the Clerics Regular Minor, invoked Mary’s aid under this title by reviving this devotion and they were freed from the scourge of cholera.
In 1868, in thanksgiving for graces received, a booklet entitled “Cenni Istorici della Madonna della Sanità di S. Lorenzo in Lucina “ with prayers was published.
Let us invoke the aid of the Blessed Mother under the title of “LA MADONNA DELLA SANITÀ” during this time of for the end of the evil virus and the conversion of sinners.

PRAYER TO OUR LADY OF HEALTH—PREGHIERA ALLA MADONNA DELLA SANITÀ

God gave you, O pre-elected Mary,
Mother of the eternal Word,
who through such a lofty dignity,
filled you with divine Wisdom,
who became the wonder of the Angels,
the marvel of the world,
the Queen of Heaven,
the Cooperator of Christ
in the redemption of the whole human family
and our Mother of love and mercy.
Oh! full of joy,
we praise and thank the Divine Word
for having graced you with so many sublime gifts,
enriched by His divine Wisdom.
Though we are wretched sinners
but humbled and repentant,
we turn to your Son Jesus, our Advocate before His Divine Father
and to you, our most wise Mother of Mercy,
to obtain for us the forgiveness of our sins with sincere sorrow.
Say unto the Divine Child,
whom you hold close to your bosom,
that we strive to be devout
and offer Him our repentant hearts again
and we will be saved.
Give us those graces and help
that we need for the benefit of our eternal salvation.
Help every devoted infirm person, who trusts in you,
by means of this devout exercise to this prodigious Imagine
for those who have recourse to you.
The favours and graces which you always give
to those who trust in you are innumerable
and, the new graces, you have obtained,
show us that you are for us always, our Mother of Health.
Oh Our most loving Mother,
obtain for us again from your Son Jesus,
our most lovable Redeemer,
that we may always trust in His infinite merits
and in your most powerful intercession, to obtain,
with the graces that we ask for in our temporal needs,
the eternal salvation of our souls.
AMEN

Madonna della Sanita, Pray for Us!

St Francis Caracciolo, Pray for Us!