Easter Tuesday – The Third Day in the Easter Octave

The Abbot Orsini wrote: “Our Lady of the Conception, at the Capuchin Convent of Donay, in Flanders, where is seen a picture of the Immaculate Conception, which was miraculously preserved from fire, in the year 1553.”

Donay, now known as Douai in France, was once considered a thriving and populous region of Flanders during the Middle Ages, markedly famous, for its textile market. It is now a commune in northern France located on the Scarpe River 25 kilometers from Arras. The town of Douai is also known as Douay or Doway in the English language.
The County of Flanders became part of the domain of the Duke of Burgundy in the year 1384 and then in 1477, became a possession of the Habsburg’s. The Town was taken by the French army and became a permanent part of France in the year 1668. During successive sieges in 1710 and 1712, the City was almost completely razed to the ground by the British Army.
The University of Douai was founded in 1562. There was a Benedictine Priory founded at Douai in 1605. In the year 1609, a translation of the Old Te,stament was published there and combined with the recently published New Testament from Rheims, to create the famous Douay-Rheims Bible that is still considered to be the standard for the complete Catholic Bible.
It is certain that the French Revolution played a great deal of havoc in the region and the Town was heavily damaged during both World Wars.
In Butler’s lives of the Saints, there is a reference to a John Woodcock OFM, born in 1603. According to this history, he joined the English Franciscans at Douai and was clothed there in 1631. For some time he lived as a Chaplain and confessor and became a zealous worker on the English mission for many years but suffered from continual sickness and eventually retired to the Convent at Douai. This is the only reference I could find to the existence of a Capuchin Convent at Donay at the time.
There is also mention of a Capuchin Monastery in the list of historical monuments of Douai but other than the above, I can find no other information about this feast.

Saint of the Day – 6 April – Blessed Zefirino Agostini (1813-1896) Priest, Apostle of the Poor and Founder of the Pious Union of Sisters Devoted to Saint Angela Merici and the Ursuline Sisters of the Daughters of Mary Immaculate of which orders he is the Patron.

Blessed Zefirino Agostini was born in Verona, Italy on 24 September 1813.   He was the oldest son of his parents, his father was a physician, who died when Zefirino was very young.

Blessed Zefirino commenced his studies for the priesthood at the age of eighteen and was Ordained on 11 March 1837.    He was then and was assigned to a very poor parish in Verona.   There he established an after-school programs for girls, religious education for mothers and education for women.

On All Souls Day of that same year, he opened his first charitable school of poor girls.  In 1860, local women who worked in the school chose community life and Father Agostini prepared the first rule for the community and on 24 September 1869, the first 12 Ursulines made their profession.   On 18 November 1869, they founded the Congregation of Ursulines, Daughters of Mary Immaculate. 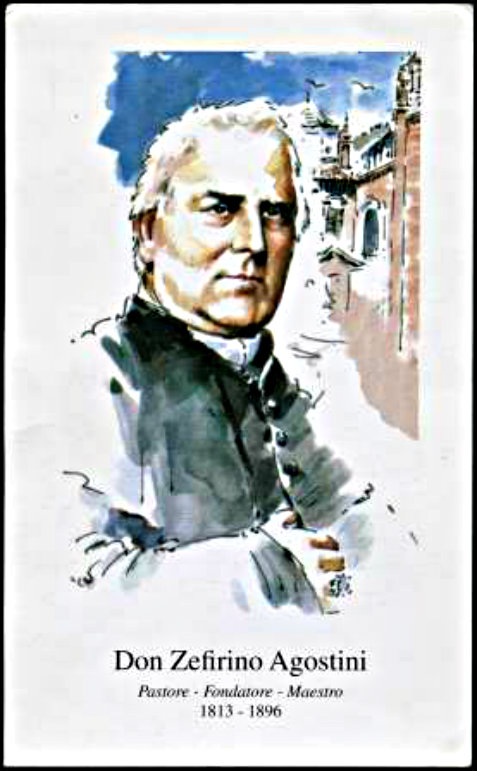 Father Agostini died on 6 April 1869 in Verona, Italy of natural causes.   His order received diocesan approval on 24 June 1923 while the papal decree of praise of Pope Pius XI was issued on 14 March 1932 and full papal approval for the institute came on 3 April 1940 from Pope Pius XII during World War II.   The order now operates in places such as Switzerland and Benin and as of 2005 has 628 religious in 78 houses.

He was Beatified on 25 October 1998 by St Pope John Paul II, after approval of the required miracle.   At the Beatification St John Paul said:

“These words of the Apostle to Timothy certainly apply to Fr Zefirino Agostino, who never lost heart despite countless difficulties.   He stands before us today as a humble, steadfast witness to the Gospel in the latter half of the 19th century, a fruitful period for the Church in Verona.   His faith was steadfast, his charitable work effective and ardent was the priestly spirit that distinguished him.

The love of the Lord spurred him in his apostolate to the poor, especially in the Christian education of girls, particularly the most needy.   He understood well the important role women play in the rehabilitation of society by teaching the values of freedom, honesty and charity.

He advised the Ursulines, his spiritual daughters:  “Poor girls, let them be the favourite object of your care and attention.   Awaken their minds, teach their hearts virtue and save their souls from malignant contact with the wicked world” (Scritti alle Orsoline, 289).   May his example strongly encourage those who honour him today as blessed and invoke him as their protector.”