The Solemnity of the Epiphany of the Lord – 6 January 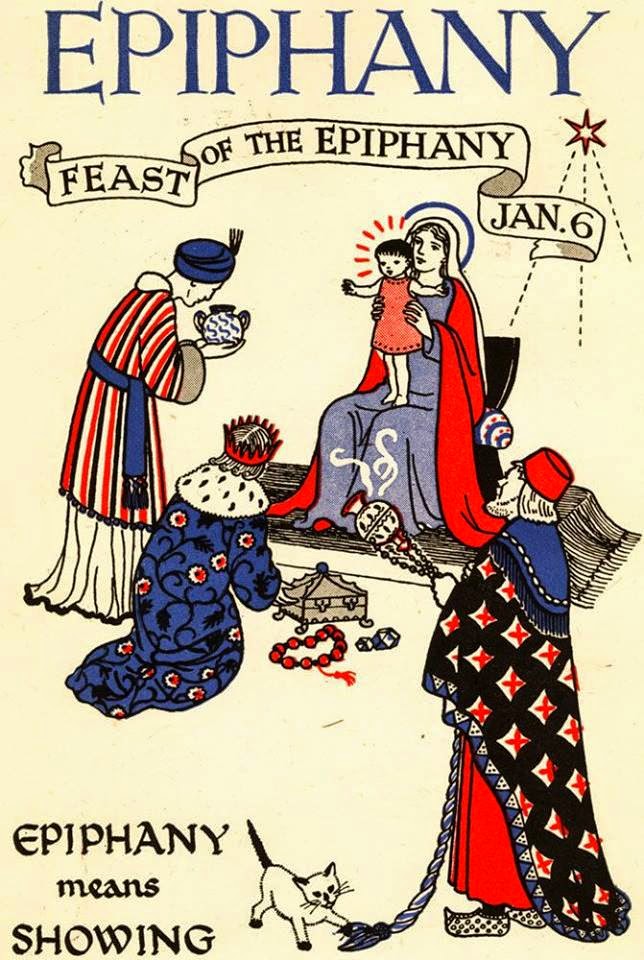 For many years in the English speaking world the feast of Epiphany has been overshadowed by that of Christmas.   But unless we realise the significance of this great day, we see only one side of the mystery of the Incarnation.   Now after contemplating the staggering fact that God has become a human child, we turn to look at this mystery from the opposite angle and realise that this seemingly helpless Child is, in fact, the omnipotent God, the King and Ruler of the universe.   The feast of Christ’s divinity completes the feast of His humanity.   It fulfils all our Advent longing for the King “who is come with great power and majesty.”   We see that whereas Christmas is the family feast of Christianity, Epiphany is the great “world feast of the Catholic Church.”

Epiphany is a complex feast.   Originating in the Eastern Church and formed by the mentality of a people whose thought processes differ sharply from our own, the Epiphany is like a rich Oriental tapestry in which the various themes are woven and interwoven — now to be seen in their historical setting, again to be viewed from a different vantage point in their deep mystical significance.   In this brief introduction four of the main ideas of the Epiphany will be outlined.

Divine manifestation:   The Epiphany takes its name from the Greek epiphania, which denotes the visit of a god to earth.   The first idea of the feast is the manifestation of Christ as the Son of God.   “Begotten before the daystar and before all ages, the Lord our Saviour is this day made manifest to the world.”   The feast unites three events in the life of Christ when His divinity, as it were, shines through His humanity – the adoration of the Magi;  the baptism of Christ in the Jordan and the first miracle at the wedding feast of Cana.   Moreover, at Epiphany the Church looks forward to the majestic coming of Christ on the “youngest day” when His manifestation as God will be complete.   The Gospels of the baptism and the marriage at Cana are read on the Octave Day and the Second Sunday after Epiphany and later Sunday masses in the Epiphany season continue to show the divine power of our Lord in some of His most striking miracles.

Royal kingship:   A second important idea in Epiphany is the extension of Christ’s kingship to the whole world.   The revelation of Christ to the three kings at Bethlehem is a symbol of His revelation to the whole of the Gentile world.   Epiphany presents to us the calling of not merely a chosen few but all nations to Christianity.

Your Light is Come:   Closely linked to both these themes of divine manifestation and world kingship is a third idea running through the Epiphany feast – that of light.   During Advent, the world was in darkness and we prayed and waited in the spirit of the Jewish nation, which lived in expectation of the Coming Light during thousands of years.   At Christmas, the Light shone forth but dimly, seen only by a few around the crib, Mary and Joseph and the shepherds.   But at Epiphany the Light bursts forth to all nations and the prophecy is fulfilled:  “The Gentiles shall walk in Thy light and kings in the brightness of Thy rising.”   The mysterious star of Epiphany, “flashing like a flame,” is still another facet of the light-motif, a symbol capable of being interpreted in a dozen different ways.

How much food for thought and reflection is contained in just these three ideas and what a significance they have for our own time!   Epiphany lifts our eyes from the family celebrations and demands that we should include in our vision “all the ends of the earth.”   It demands that, like the three wise men, we should have the courage to follow the light of the star we have seen, however hazardous the journey;   that the light of our faith, like that of the wise men, should be so strong that we are able to see and recognise our Lord and Ruler, in however unexpected a way, He may present Himself to us and that having recognised Him, we should bow down and adore Him, offering Him our total loyalty.

Moreover, Epiphany demands that like these kings we should return to our own countries a different way, carrying to all those we meet the light of Christ.   “For behold, darkness shall cover the earth,” says the Epistle of the Epiphany Mass, “and a mist the people but the Lord shall arise upon Thee and His glory shall be seen upon Thee.   And the Gentiles shall walk in Thy light. . .”   These words may be applied to us, upon whom the light of Christ has indeed risen and who have the responsibility to radiate that light in the darkness of our own world.   It is clear how much the feast of Epiphany must mean to all who are engaged in the apostolate and are striving to extend the kingdom of Christ.

The royal nuptials:   Besides the important ideas outlined above, there is still another great theme threaded through the Epiphany feast—the theme of the royal nuptials, the wedding of Christ with humanity.   It is an idea on a completely different level from the historical events which the Epiphany celebrates, yet inextricably bound up with them; for example, the historical marriage feast of Cana is used by the Church to suggest the setting for Christ’s nuptials with the Church, the wise men represent not only the three Persian Magi adoring the Babe 2000 years ago at Bethlehem but also the Gentile world hurrying to the wedding feast at the end of time when mankind’s nuptials with the divine Bridegroom will be celebrated, the gold, frankincense and myrrh are not only tokens for the little Baby King in the stable but royal wedding gifts for the mystical marriage feast of heaven.

The Epiphany antiphon for the hour of Lauds brings out strikingly this theme of the divine marriage of Christ with humanity and at the same time shows the deep mystical significance behind the historical events surrounding the feast.   Perhaps nowhere more clearly than in this antiphon, do we see that on Epiphany we do not commemorate a set of historical facts, as much as we celebrate a great mystery:

“This day the Church is joined to her heavenly Spouse, for Christ has cleansed her crimes in the Jordan.   With gifts the Magi hasten to the royal nuptials and the guests are gladdened with wine made from water.”

Twelve Days of Christmas, The by Elsa Chaney, The Liturgical Press, Collegeville, MN, 1955