“Again they sought to seize Him”

“And I became their abomination
because there was no jealousy in me.
Because I continually did good
to every man
I was hated.
And they surrounded me
like mad dogs (Ps 22[21]:17)
those, who in stupidity,
attack their masters.
Because their mind is depraved
and their sense is perverted.”

REFLECTION – “If the Law calls them gods to whom the word of God came and scripture cannot be set aside,how can you say that the one whom the Father has consecrated and sent into the world blasphemes because I said, ‘I am the Son of God’?”   Yes indeed, if God has spoken to us so that we might be called ‘gods,’ how could the Word of God, the Word that is in God, not be God?   If we have been made sharers in His nature and have become gods because God speaks to us, how could this Word, through which this gift comes to us, not be God? …   As for you, you approach the Light and receive it and are counted among the children of God but if you draw back, you become dark and are counted among the children of darkness (cf. 1 Thes 5:5). …

“Then they tried to seize him.”   If only they had seized Him!   But by faith and intellect, not so as to mock and put him to death!   At this very moment, as I speak to you …, all of us, both you and I, are wanting to seize Christ.   To ‘seize’, what does that mean?   You have ‘seized’ when you have understood.   But Christ’s enemies were looking for something different.   You have seized in order to possess but they wanted to seize Him in order to get rid of Him.   And because this was how they wanted to seize Him, what does Jesus do?   “He escaped from their power.”   They were unable to seize Him because they did not have the hands of faith. …   We truly seize Christ if our minds grasp the Word.” … St Augustine (354-430) Father & Doctor of the Church – Sermons on the Gospel of John, no 48, 9-11 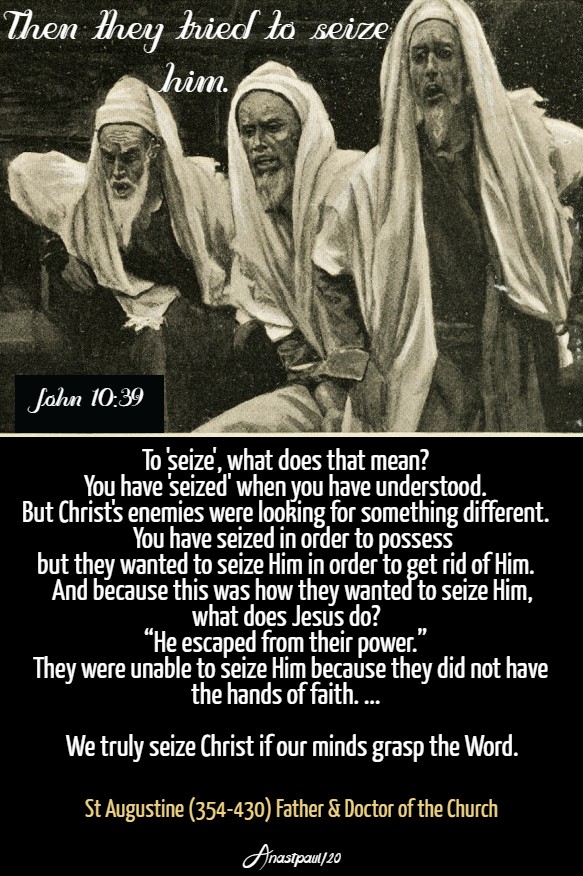 PRAYER – Holy Father, our Father, help us to lay down the stones of hate and embrace Your Son who stands before us in need.   Give us the hands of faith and minds to grasp the Word, teach us to see His Face in those who cry out to us.   Teach us compassion and love.   Mary, your Immaculate Heart is our school.   We make our prayer through Christ our Lord, with the Holy Spirit, one God for all eternity, amen. 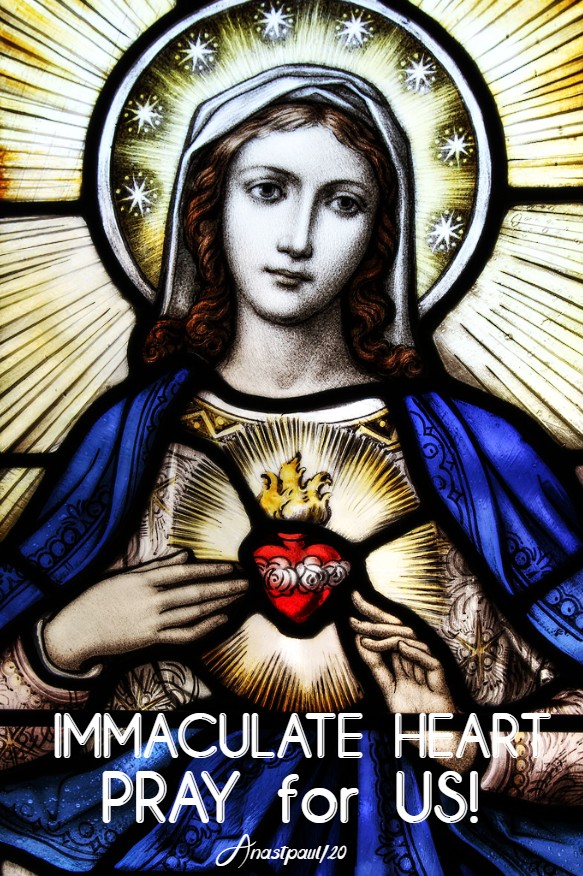 Again they tried to arrest him
but he escaped from their hands...John 10:39 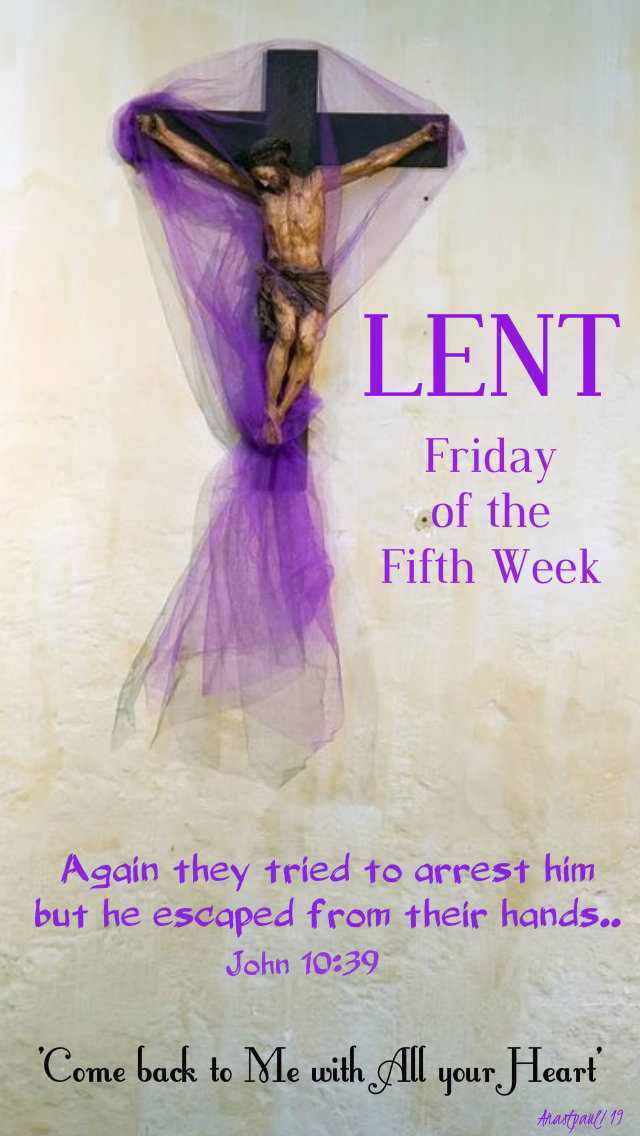 Odes of Solomon
(Hebrew Christian text from
the beginning of the 2nd century)
No. 28

I trusted, consequently I was at rest;
because trustful is he in whom I trusted.
He has greatly blessed me, and my head is with him.
And the dagger shall not divide me from him,
nor the sword .

Because I am ready before destruction comes,
and have been placed in his incorruptible arms.
And immortal life embraced me and kissed me.
And from that (life) is the Spirit which is within me.
And it cannot die because it is life.

[Christ speaks:]
Those who saw me were amazed,
because I was persecuted.
And they thought that I had been swallowed up,
because I appeared to them as one of the lost.
But my defamation became my salvation.

And I became their abomination,
because there was no jealousy in me.
Because I continually did good to every man
I was hated.
And they surrounded me like mad dogs (Ps 22[21]:17)
those who in stupidity attack their masters.
Because their mind is depraved and their sense is perverted.

But I was carrying water in my right hand,
and their bitterness I endured by my sweetness.
And I did not perish, because I was not their brother,
nor was my birth like theirs.
And they sought my death but were unsuccessful
because I was older than their memory.

And in vain did they cast their lots against me.
And those who were after me
Sought in vain to destroy the memorial of him
Who was before them.
Because the mind of the Most High cannot be surpassed
And his heart is superior to all wisdom.
Hallelujah! 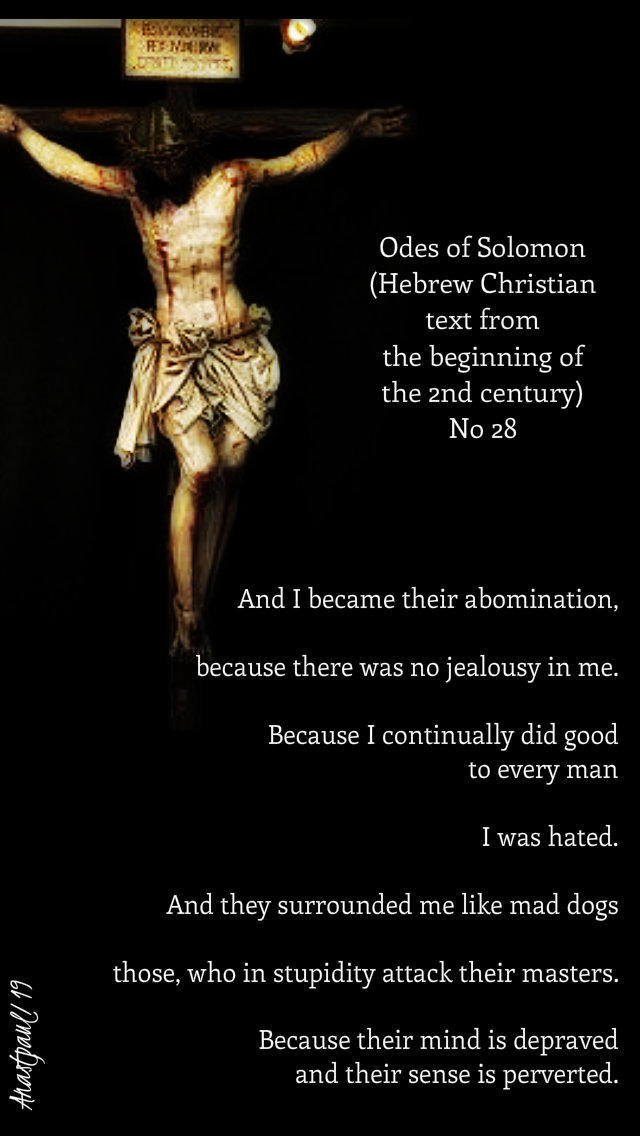 Daily Meditation:
Set us free.
On this Friday before Good Friday,
it might be most appropriate to make the Stations.
Our desire is becoming more focused and more intense.
After our weeks of reflection, we know that our selfishness has placed us in ruts,
has made us slaves to some very unhappy and sometimes death-dealing patterns.
The celebration of our freedom and healing is close at hand.

Jesus carried our sins in his own body on the cross
so that we could die to sin and live in holiness;
by his wounds we have been healed.
The Communion Antiphon – 1 Peter 2:24

Closing Prayer:
Most forgiving Lord,
again and again You welcome me back into Your loving arms.
Grant me freedom from the heavy burdens of sin
that weigh me down
and keep me so far from You.

May the Lord bless us,
protect us from all evil
and bring us to everlasting life.
Amen.

Again they tried to arrest him but he escaped from their hands…John 10:39

REFLECTION – “As we approach Holy Week, we are confronted with one of the most paradoxical mysteries of our faith – Why do we reject the love of Jesus Christ in our lives? The daily Gospels have been slowly building to a crescendo through growing hatred of Jesus.   In the face of that hatred, Jesus continues to present them with the truth that He is the Son of God.   As He asks people to look to His teachings and works as proof that He is God’s Son, the teachings and works are completely overlooked and one message is clearly emerging – Kill the messenger.   Jesus’s offer of recognising Him in the world, is an offer, that is relevant and available today.   The “good works” He inaugurated are on view, whenever one goes beyond oneself and reaches out in love and compassion.   They are continued, when one speaks an enhancing word or performs a loving action.   These are visible in selfless service and forgiveness,.   They are visible when love is made real.”…Fr Errol Fernandes SJ 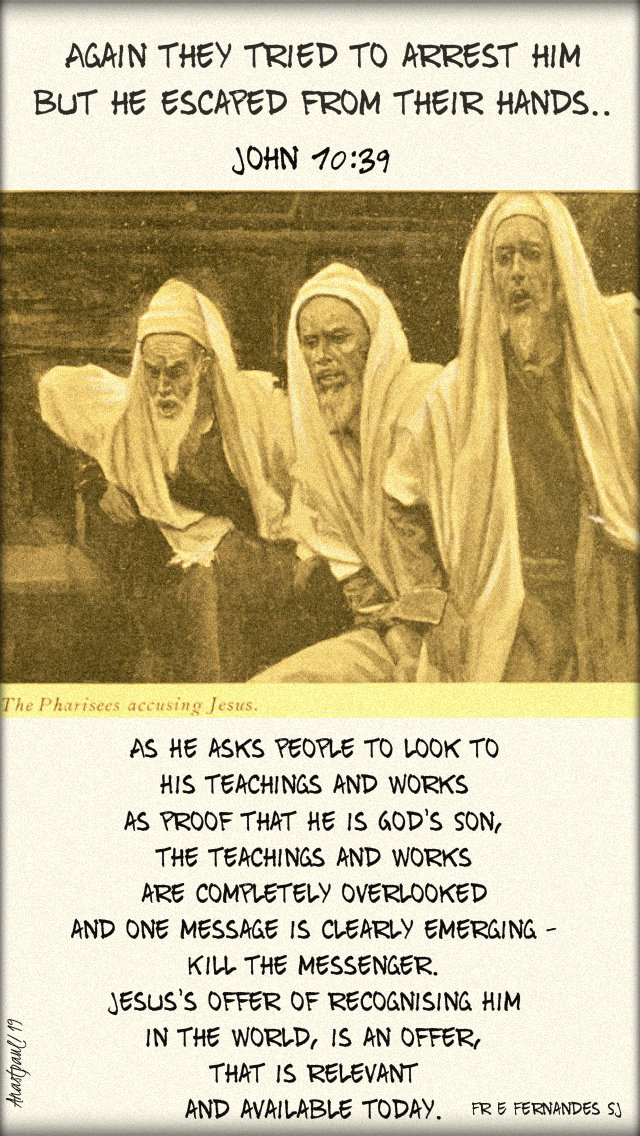 PRAYER – Holy Father, our Father, help us to lay down the stones of hate and embrace Your Son who stands before us in need.   Teach us to see His Face in those who cry out to us.   Teach us compassion and love. Listen to the prayers of St Teresa de los Andes, she who in her short life proved the immense power of divine love extended to all.   Mary, your Immaculate Heart is our school.   We make our prayer through Christ our Lord, with the Holy Spirit, one God for all eternity, amen. 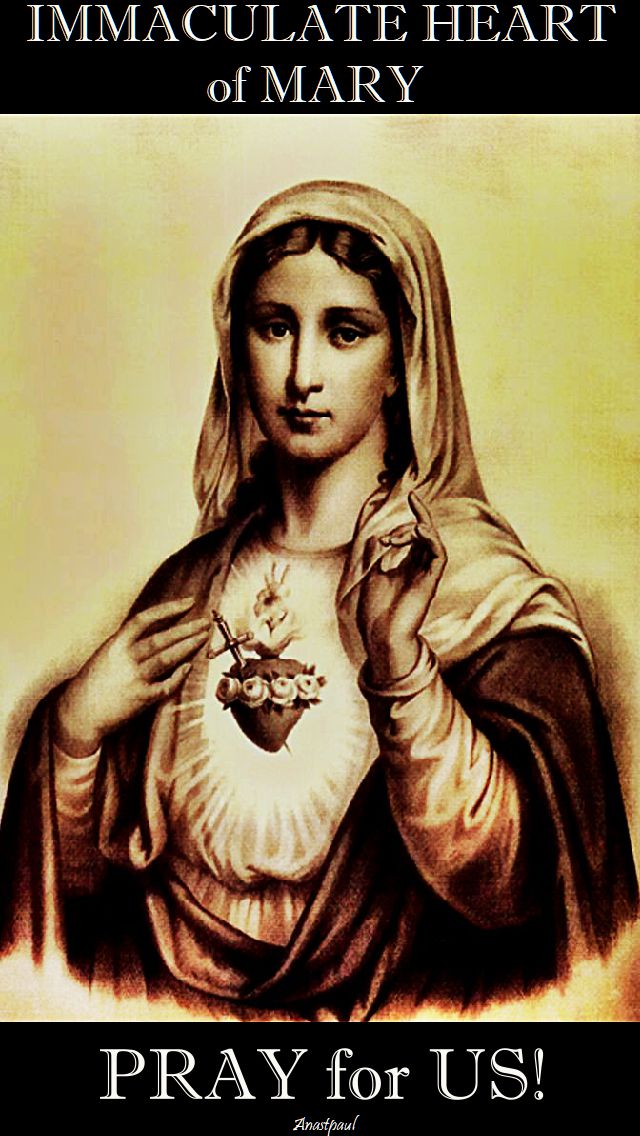 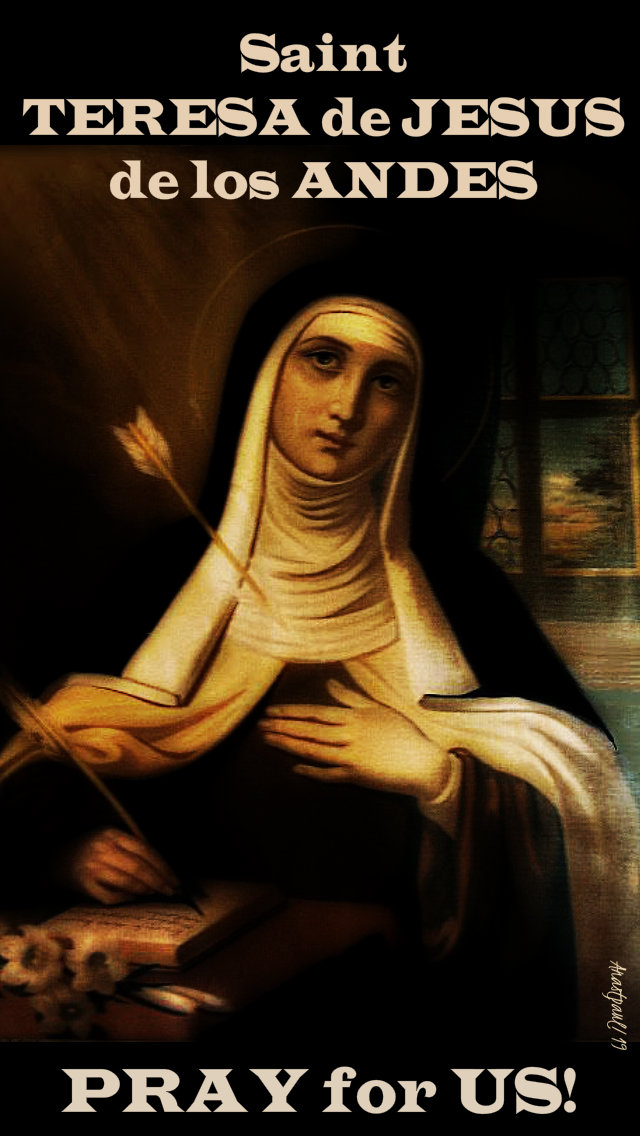