Clermont-Ferrand is located on a plain in the volcanic region of central France. Unlike most hub cities, it is not on a body of water. And yet ,for a thousand years, Clermont’s eastern district has been known as the Port.

In the crypt of its Romanesque Church of Our Lady of the Port, dating to the early 1100s, is an unusual Black Virgin, a polychromed walnut Statue just under a foot high. This long-revered image is a copy made around 1800 of a Statue from the 1200s, which was held to be a copy of an even earlier image–possibly going back to the Shrine’s foundation by St Avit in the 500s, or possibly a copy of a Byzantine icon brought by returning Crusaders. Mary cradles the child against her cheek, such as the Notre-Dame de Grâce, given in 1450 to Cambrai Cathedral in northern France.
n 1614, snow and bitter cold enveloped the area without stopping from Martinmas (11 November) to Easter. By May, there were still no buds and no grass and famine loomed. The leaders and Priests conferred. They asked the Chapter to bring out the image of Our Lady of the Port from the collegiate Church.

The four-hour procession took place on the morning of Ascension Day, May 15, 1614. Some 8,000 people followed the holy image and relics of Saints around the City walls, chanting litanies. The next day, the weather grew milder and in the following days, truly beautiful. To the joy of all, the harvests were excellent that summer and even more abundant the next year.

The new Bishop, Joachim d’Estaing, on 5 May 1616, ordered an inquiry among the town notables, after which he issued an ordinance declaring that the Feast of Notre-Dame du Port would take place on 15 May in the Parish and be observed as a day of rest in the future.

The Statue was crowned in 1875 and on 15 May 1881, Pope Leo XII declared the Church a Minor Basilica. The procession of the first Sunday after 15 May remains joyously well attended.

Martyrs of Persia: Three Christians who were tortured, mutilated, imprisoned, starved and finally executed together for refusing to worship the sun and fire during the persecutions of Shapur II. We know nothing else about them but their names: Bohtiso, Isaac and Simeon. They were beheaded or burned at the stake (records vary) in the late 3rd century somewhere in Persia

Martyrs of Persia: Three Christians who were tortured, mutilated, imprisoned, starved and finally executed together for refusing to worship the sun and fire during the persecutions of Shapur II. We know nothing else about them but their names: Bohtiso, Isaac and Simeon. They were beheaded or burned at the stake (records vary) in the late 3rd century somewhere in Persia

There was nothing exceptional about St Isidore the Farmer’s life except his obvious holiness. He was a husband, a father and a common labourer who did all things exceptionally well because he did all for God. His life teaches that holiness is within the reach of everyone and that the life of the ordinary man should be the pathway to God. Many implications can be found in a simple laborer achieving sainthood: Physical labor has dignity; sainthood does not stem from status; contemplation does not depend on learning; the simple life is conducive to holiness and happiness. The truth which emerges is this: If you have your spiritual self in order, your earthly commitments will fall into order also. “[S]eek first the kingdom [of God] and his righteousness,” said the carpenter from Nazareth, “and all these things will be given you besides” (Matthew 6:33).

St Isidore the Farmer, Pray for us! 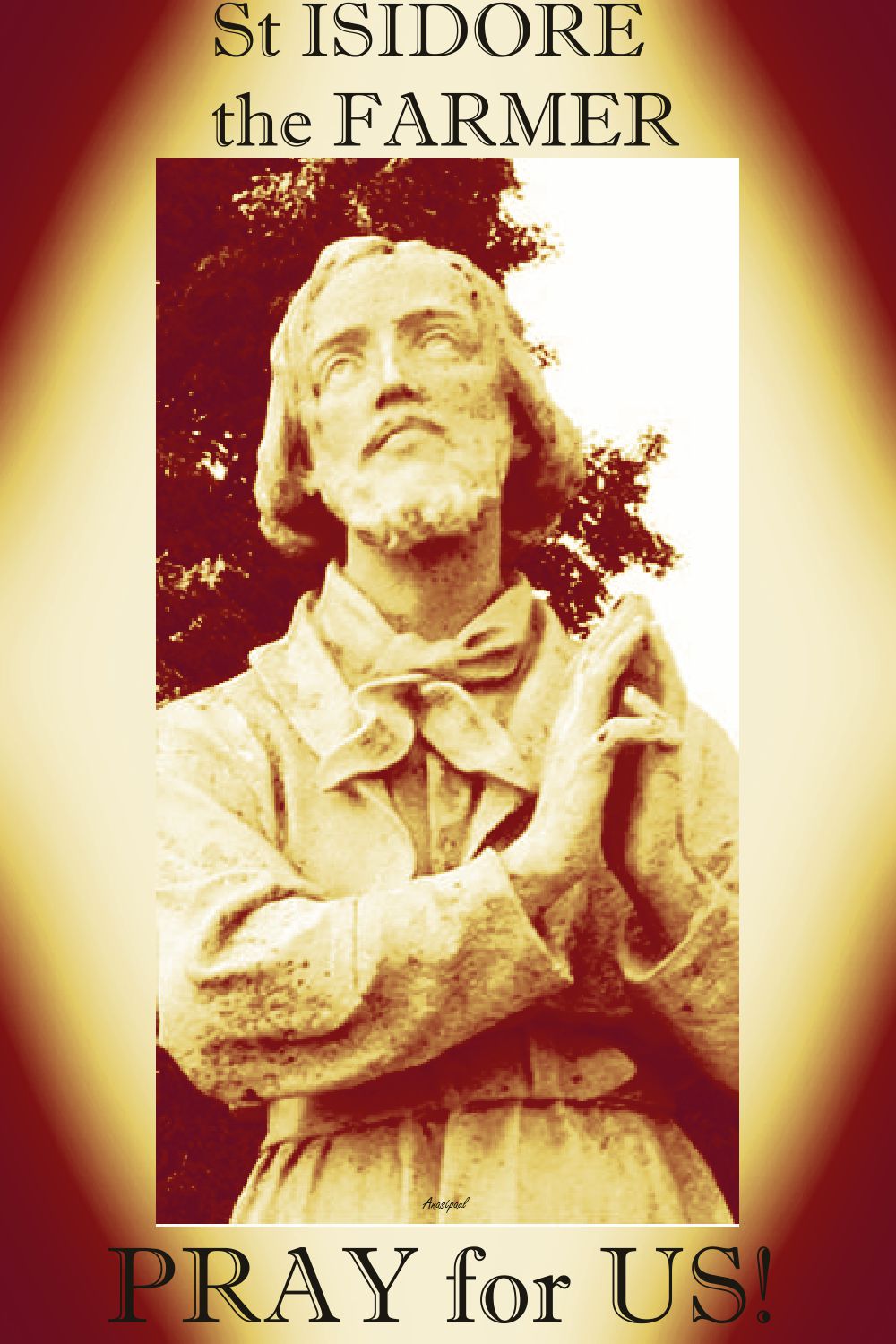 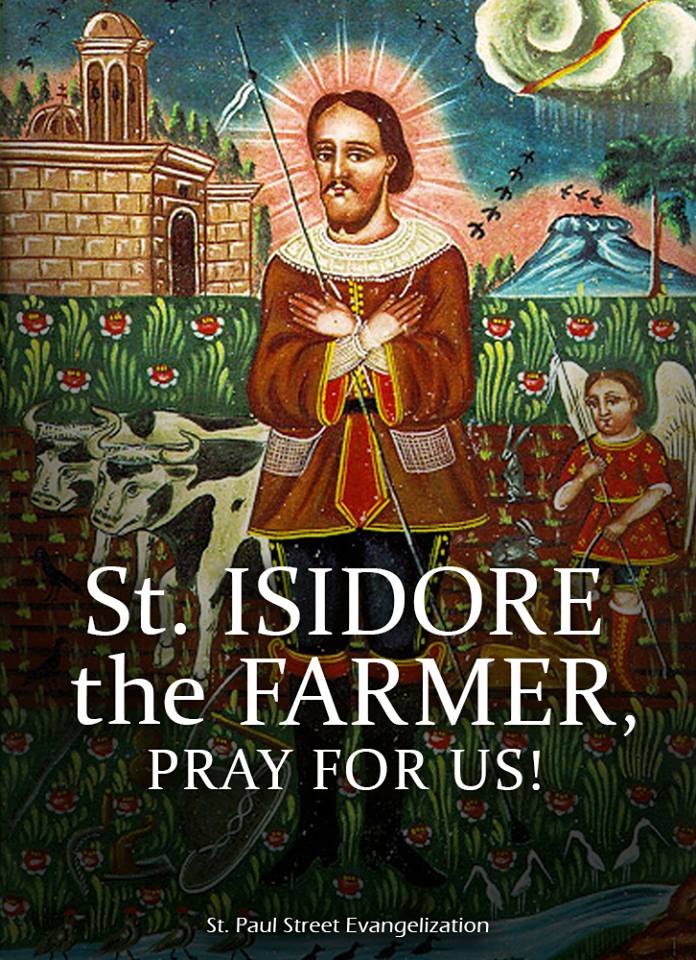 St. Isidore, the Farmer, was born in Madrid, Spain, about the year 1110.   He came from a poor and humble family.    From childhood he worked as a farm hand on the De Vargas estate.   He was very prayerful and particularly devoted to the Mass and the Holy Eucharist.   He loved the good earth, he was honest in his work and careful in his farming practices.   It is said that domestic beasts and birds showed their attachment to him because he was gentle and kind to them.   Master De Vargas watched Isidore at plowing and he saw two angels as his helpers.   Hence, the saying arose, “St. Isidore plowing with angels does the work of three farmers.”

Isidore married a sweet and pious maid-servant by the name of Maria.  They had only one son who died in youth.   Both were most charitable and ever willing to help neighbours in distress and the poor in the city slums.

St. Isidore died on May 15, 1170 (the Spanish feast day), his saintly wife, a little later.   He was canonised on March 22, 1622.   The earthly remains of the holy couple are found over the main altar of the cathedral in Madrid, Spain. S. Maria was not officially canonised but is honoured as a saint throughout Spanish countries.   Her head (cabeza) is carried in solemn processions during times of drought.   By a special decree of the Sacred Congregation of Rites, dated February 22, 1947, St. Isidore was constituted as the special protector of the National Catholic Rural Life Conference and American farmers.

How beautiful and appropriate for the Catholic farm family to be devoted to this simple and saintly couple, who like farmers everywhere are “partners with God,” in furnishing to the world food, fiber and shelter. 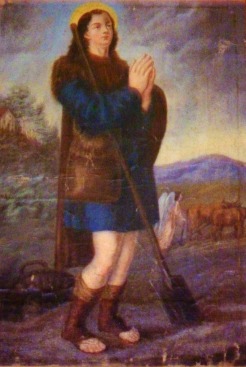 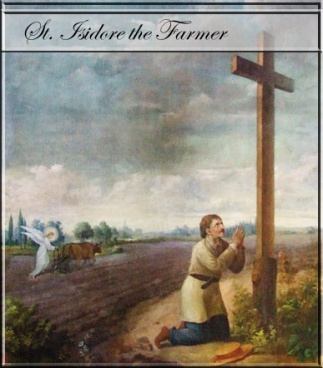 In the morning before going to work, Isidore would usually attend Mass at one of the churches in Madrid.   One day, his fellow farm workers complained to their master that Isidore was always late for work in the morning.   Upon investigation, so runs the legend, the master found Isidore at prayer whilst an angel was doing the ploughing for him.

On another occasion, his master saw an angel ploughing on either side of him, so that Isidore’s work was equal to that of three of his fellow field workers.   Isidore is also said to have brought back to life his master’s deceased daughter and to have caused a fountain of fresh water to burst from the dry earth to quench his master’s thirst.

One snowy day, when going to the mill with corn to be ground, he passed a flock of wood-pigeons scratching vainly for food on the hard surface of the frosty ground.   Taking pity on the poor animals, he poured half of his sack of precious wheat upon the ground for the birds, despite the mocking of witnesses.   When he reached the mill, however, the bag was full, and the wheat, when it was ground, produced double the expected amount of flour.

Isidore’s wife, Maria, always kept a pot of stew on the fireplace in their humble home as Isidore would often bring home anyone who was hungry.  One day he brought home more hungry people than usual.    After she served many of them, Maria told him that there simply was no more stew in the pot.   He insisted that she check the pot again and she was able to spoon out enough stew to feed them all.

He is said to have appeared to Alfonso VIII of Castile and to have shown him the hidden path by which he surprised the Moors and gained the victory of Las Navas de Tolosa, in 1212.   When King Philip III of Spain was cured of a deadly disease after touching the relics of the saint, the king replaced the old reliquary with a costly silver one and instigated the process of his beatification.   Throughout history, other members of the royal family would seek curative powers from the saint.

The number of miracles attributed to him has been counted as 438.  The only original source of hagiography on him is a fourteenth century codex called Códice de Juan Diácono which relates five of his miracles:   1. The pigeons and the grain.   2. The angels ploughing.   3. The saving of his donkey, through prayer, from a wolf attack.   4. The account of his wife’s pot of food.   5. A similar account of his feeding the brotherhood. The codex also attests to the incorruptible state of his body, stating it was exhumed 40 years after his death.

Isidore was beatified in Rome on 2 May 1619, by Pope Paul V.   He was canoniSed nearly three years later by Pope Gregory XV, along with Saints Ignatius of Loyola, Francis Xavier, Teresa of Ávila and Philip Neri, on 12 March 1622.

In 1696, his relics were moved to the Royal Alcazar of Madrid to intervene on behalf of the health of Charles II of Spain.   While there, the King’s locksmith pulled a tooth from the body and gave it to the monarch, who slept with it under his pillow until his death. This was not the first, nor the last time his body was allegedly mutilated out of religious fervour.   For example, it was reported one of the ladies in the court of Isabella I of Castile bit off one of his toes.

In 1760, his body was brought to the Royal Palace of Madrid during the illness of Maria Amalia of Saxony.

In 1769, Charles III of Spain had the remains of Saint Isidore and his wife Maria relocated to the San Isidro Church, Madrid.   The sepulchre has nine locks and only the King of Spain has the master key.   The opening of the sepulchre must be performed by the Archbishop of Madrid and authorized by the King himself.   Consequently, it has not been opened since 1985. 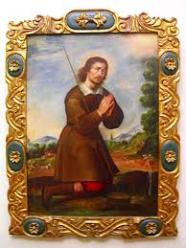