The story of Dymphna was first recorded in the 13th century by a canon of the Church of St. Aubert at Cambrai, France.   It was commissioned by Guiard of Laon (1238–1248), the Bishop of Cambrai.   The author expressly stated that his work was based upon a long-standing oral tradition as well as a persuasive history of miraculous cures of the mentally ill.

Born during the 7th century to Irish royalty, St Dymphna’s mother, the Queen, had the girl baptised and raised in the faith in secret because of her husband’s pagan beliefs. When Dymphna was only fourteen, her beloved mother died and the King went mad in his great state of grief.   He decided that he wanted to marry Dymphna, his own daughter, because she looked so much like her mother.   Dymphna, who had made a vow of virginity before God, was horrified by her father’s proposal and adamantly refused.

To escape the king’s inevitable outrage over her rejection, Dymphna fled the kingdom. She was accompanied by her Confessor, Fr Gerebran, as well as several faithful servants from her father’s court.   The group settled in Belgium in a city called Gheel near a shrine of St Martin of Tours.   While there, Dymphna used her wealth to care for the sick and poor of the region. 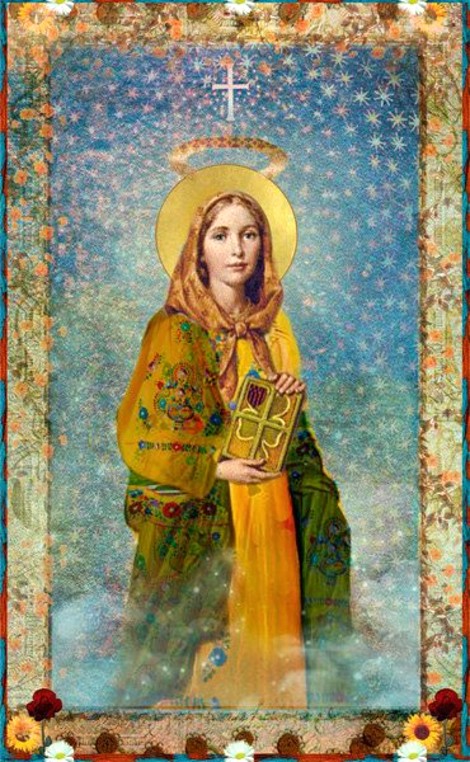 Unfortunately, her father discovered her whereabouts and he sailed to Gheel in the hopes of bringing her back with him.   Upon his arrival, the King continued his attempts to convince Dymphna to marry him, promising great wealth and esteem if she accepted his offer.   Still, she would not change her mind, staying true to her vow of virginity and refusal to enter an incestuous relationship.    In his anger, the King ordered his men to kill Fr Gerebran while he himself beheaded Dymphna.   She was only fifteen years old at the time.

Both Dymphna and the priest, Fr Gerebran, were later named Saints and Dymphna was honoured with the crown of Martyrdom.   She was declared Patroness of those with mental problems because of the great anguish her father’s mental affliction caused.

A church was built in Gheel in her name and many people suffering from mental disorders began travelling there for cures.   Soon, the church was so full that an addition was added onto it but even then it still could not contain all the visitors.   As a result, the townspeople of Gheel began accepting the mentally ill travellers into their homes.   This tradition continues to this day.

The remains of Dymphna were later put into a silver reliquary and placed in the Gheel Church. The remains of Fr Gerebran were moved to Xanten, Germany.   During the late 15th century the original St Dymphna Church in Gheel burned down.   A second “Church of St Dymphna” was then built and Consecrated in 1532.   The church still stands on the site where her body is believed to have first been buried.

Good Saint Dymphna,
great wonder-worker in every affliction of mind and body,
we humbly implore your powerful intercession
with Jesus through Mary, the Health of the Sick,
in our present need.
………………………… (Mention it)
Saint Dymphna,
Martyr of purity,
Patroness of those who suffer
with nervous and mental afflictions,
beloved child of Jesus and Mary,
pray to Them for us
and obtain our requests.

(Pray one Our Father, one Hail Mary and one Glory Be.)

Saint Dymphna, Virgin and Martyr, Pray for Us!