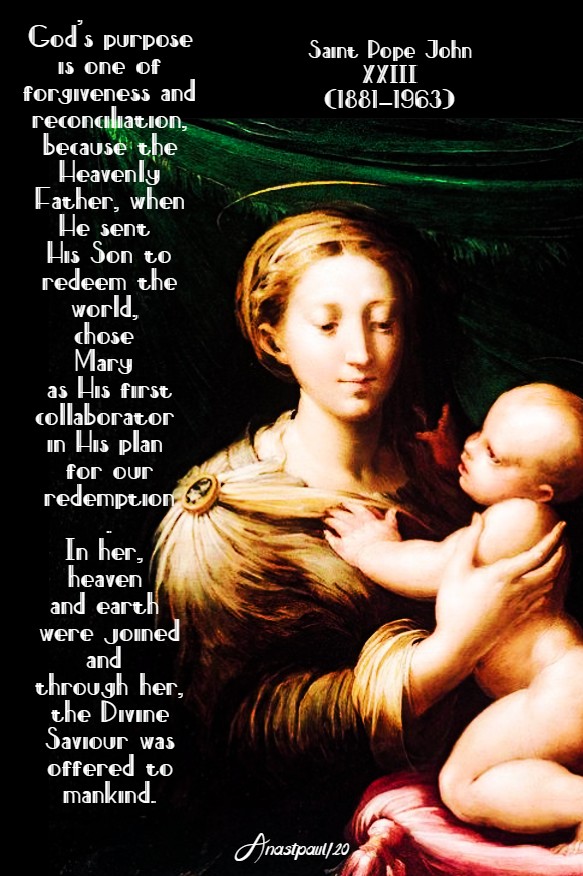 “The glorification of Mary, as it shines in the gentle radiance of this month’s celebrations, is simply a reminder of her mission, of all God’s purpose in her.

It is a mission of mercy and salvation, which springs from her other supreme privilege, divine motherhood.
God’s purpose is one of forgiveness and reconciliation, because the Heavenly Father, when He sent His Son to redeem the world, chose Mary as His first collaborator in His plan for our redemption.
In her, heaven and earth were joined and through her, the Divine Saviour was offered to mankind.

What harmonies of piety and love are awakened by the hymn Salve Regina, one of the oldest and dearest of all canticles, which sings with trustful longing, of this motherly role of Mary!
From beginning to end, this prayer – “Hail, Holy Queen, Mother of mercy,” is the lyrical cry of all, who, disturbed by sin and subject to tears, pain and death, still look to her, as their “life, sweetness and hope.”
To her, they address their imploring prayer, a supreme expression of shining and unconquerable faith:  “Show unto us Jesus, the blessed fruit of thy womb, O clement, O loving, O sweet Virgin Mary.”

The Cardinal Virtues of Mary

“Mary’s soul has been appropriately styled, ‘the Garden of all the Virtues.’
In it, the three theological virtues were wonderfully interwoven with the four cardinal virtues of, justice, prudence, temperance and fortitude.

As St John Chrysostom observed, justice is nothing else but the perfect observance of all the commandments. (Homil 12 super Matth).
The Blessed Virgin obeyed all the commandments in her relations with God, to Whom she dedicated herself, from the moment when she gained the use of reason.
She obeyed them in her relations with her Son, Jesus Christ, for she reared and instructed Him with loving maternal care, even though she knew that He was God and had no need of her attention.
She fulfilled them in her relations with men, for whose salvation, she united her sufferings and her merits, to the infinite sufferings ad merits of our Saviour.

Furthermore, Mary was prudence itself.
This virtue shone forth in all her words and in all her actions.
When the Angel appeared in human form and told her that she was to be the Mother of God, she was not flattered nor complacent.
She thought calmly about the mystery which had been announced to her and asked the Angel how it could come to be, since she had already consecrated her virginity to God.
She pronounced her Fiat only when she was reassured by the Angel that through the intervention of the Holy Spirit, she would be a virgin mother.
This was the beginning of the miracle of the Incarnation.
When she was greeted by St Elizabeth as the Mother of the Lord, she did not boast about her distinction but composed a hymn of gratitude, in which she attributed her glory to God alone.
Mary’s prudence, is equally evident in her words of gentle reproof to Jesus after He had been lost and found again, in the company of the Doctors.
It is again obvious at the wedding celebrations in Cana, when she knew well, how to snatch the first miracle from the heart of Jesus.

Mary possessed the virtue of temperance also, both in her external behaviour and in her perfect internal control over all her faculties.
This was the result of her immunity from original sin, which has created such grave moral disorder in our poor human nature.
This virtue, was further perfected, by the purity and holiness of her daily life.

Finally, the virtue of fortitude was Mary’s to an heroic degree.
But her fortitude was always calm and controlled.
The elderly Simeon had foretold that the sword of sorrow would pierce her heart.
Her whole life was interwoven with suffering and privation.
From the manger in Bethlehem, to the flight into Egypt, from the Circumcision, when Jesus first shed His blood, to the Hill of Calvary, where He gave all He had for our salvation.
Mary offered her sufferings along with those of her divine Son for our redemption.
Her fortitude never wavered but was always serene, for her mind and heart were in constant communication with God.”

“If you know me, then you will also know my Father.
From now on, you do know him and have seen him.”

” God does not leave us groping in the dark.
He has shown Himself to us as a man.
In His greatness, He has let Himself become small.”

First, faith is simple.
We believe in God – in God,
who is the Beginning
and End of human life.
We believe in a God,
who enters into a relationship
with us human beings,
who is our origin and our future.
Consequently, faith is,
always and inseparably, hope –
the certainty that we have a future
and will not end up as nothing.
And faith is love,
since God’s love is “contagious”.
This is the first thing –
we simply believe in God
and this brings with it,
hope and love.”

REFLECTION – “Beloved, Jesus Christ is our salvation, He is the high priest through whom we present our offerings and the helper who supports us in our weakness. Through Him, our gaze penetrates the heights of heaven and we see, as in a mirror, the most holy face of God.   Through Christ, the eyes of our hearts are opened and our weak and clouded understanding, reaches up toward the light.   Through Him the Lord God willed that we should taste eternal knowledge, for Christ is the radiance of God’s glory and as much greater than the angels as the name God has given Him is superior to theirs.
… Think, my brothers, of how we first came into being, of what we were at the first moment of our existence.   Think of the dark tomb out of which our Creator brought us into His world, where He had His gifts prepared for us, even before we were born.   All this we owe to Him and for everything, we must give Him thanks.   To Him be glory forever and ever. Amen.” … St Pope Clement of Rome (c 35-99), Apostolic Father, Bishop of Rome and Martyr – An excerpt from his Letter to the Corinthians 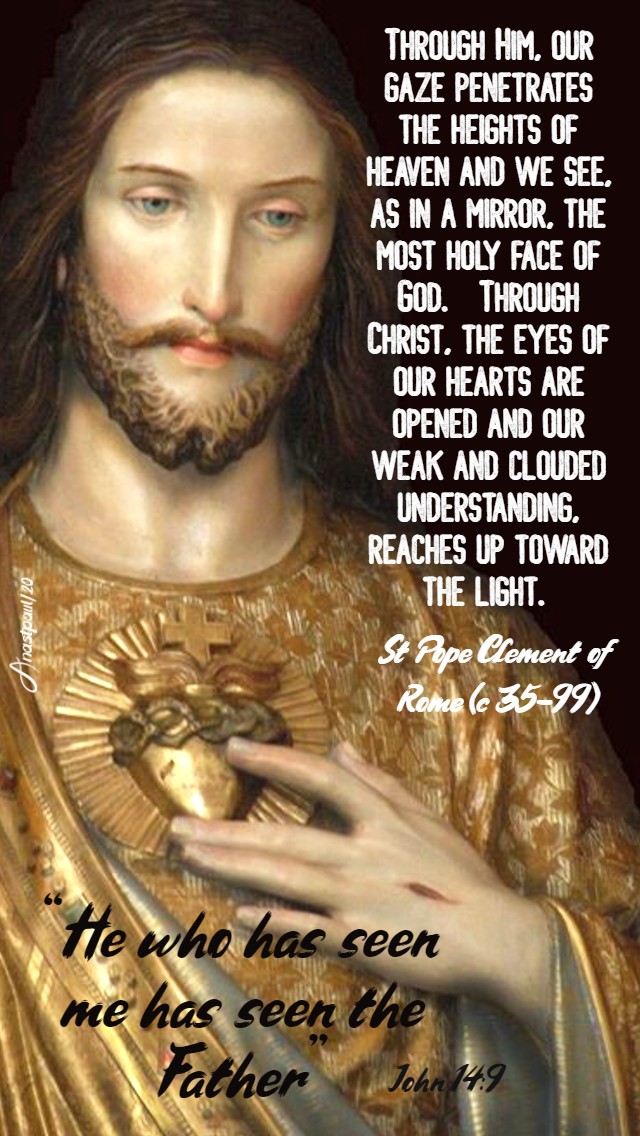 PRAYER – Since it is from You God, our Father, that redemption comes to us, Your adopted children, look with favour on the family You love, give us true freedom and to all who believe in Christ and bring us all alike to our eternal heritage.   Grant we pray, that by the prayers of Your holy angels and saints, Blessed Giovanni Benincasa and most especially our beloved Virgin Mary, Mother of Christ, we may run this race always in prayer, trusting in Your divine Son’s intercession, to attain the Glory of Your Kingdom and the Light of Your Face. Through Jesus Christ, in the union of the Holy Spirit, God with You, forever and ever, amen. 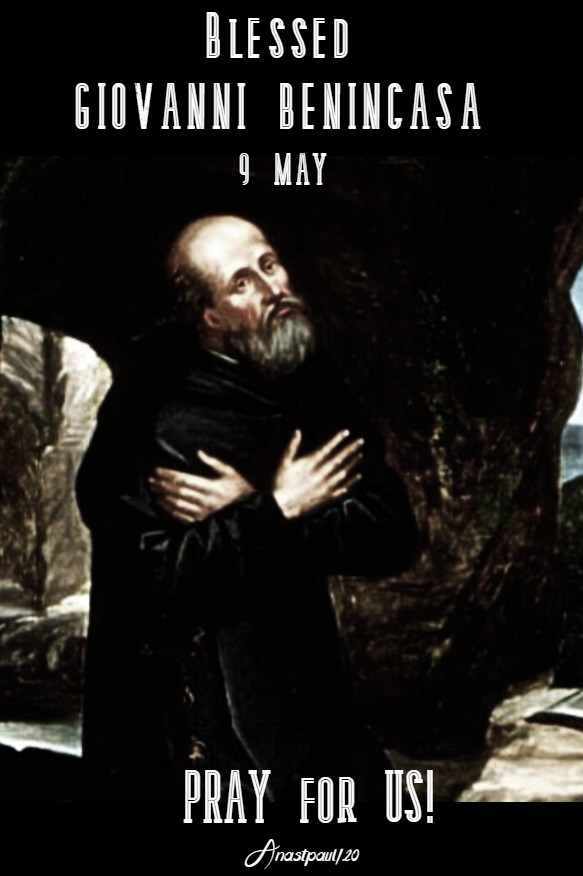 Our Mediatrix and Advocate
O blessed Lady,
you found grace, brought forth the Life,
and became the Mother of Salvation.
May you obtain the grace for us to go to the Son.
By your mediation, may we be received by the One
who through you, gave Himself to us.
May your integrity compensate with Him
for the fault of our corruption;
and may your humility,
which is pleasing to God,
implore pardon for our vanity.
May your great charity
cover the multitude of our sins
and may your glorious fecundity
confer on us a fecundity of merits.
Dear Lady, our Mediatrix and Advocate,
reconcile us to your Son,
recommend us to Him,
and present us to your Son.
By the grace you found,
by the privilege you merited,
by the mercy you brought forth,
obtain for us the favour we ask of you,
O blessed Lady.
Amen

Saint of the Day – 9 May – Blessed Giovanni Benincasa of Montepulciano OSM (1375-1426) Religious Friar of the Servite Order, Hermit, Mystic, Penitent – born in 1375 at Montepulciano, Siena, Italy and died on 9 May 1426 at Monticchiello, Italy of natural causes.   Patronage – Montepulciano. 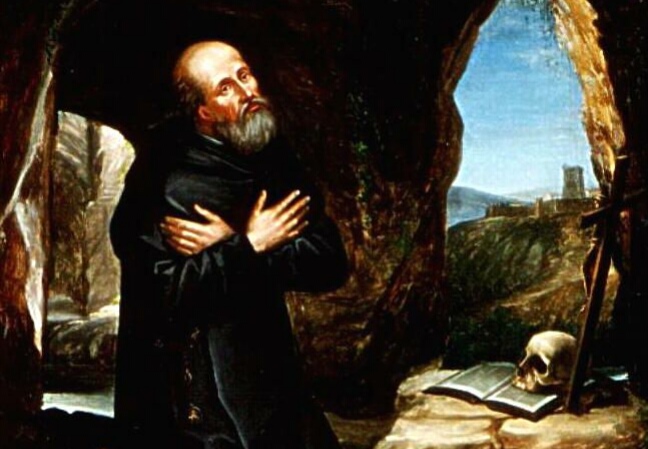 Giovanni Benincasa (cousin of Caterina Benincasa birth name of St Catherine of Siena) was born in Montepulciano in 1375 and fulfilled his vocation in 1400 by professing his vows as a religious of the order of the Servants of Mary at the convent of his hometown.   He obtained permission from superiors to lead a solitary life in penance.

After a few months’ stay in the hermitage of Bagni San Filippo at Monte Amiata, he moved to Monticchiello where the Servants of Mary owned the plot of land next to the cave, in whose upper entrance he chose his hermit’s home.   Here he spent twenty years in prayer and penance doing humble work necessary and died there on 9 May 1426, aged 51,revered by all the people. 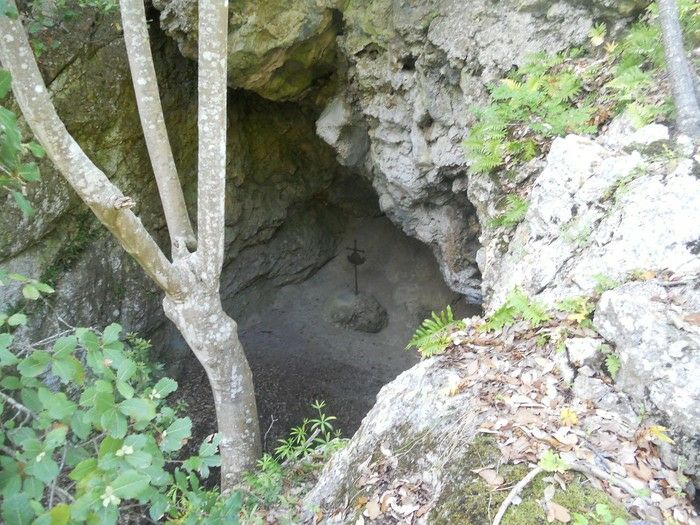 A dispute arose between the Servite fathers who wanted to move the body into the convent and the inhabitants of Monticchiello who wanted it in their church.   The “judgement of God” was used – the coffin was hoisted on a cart pulled by white oxen, leaving them the choice.   The oxen went to Monticchiello stopping right in front of the church.   The people attributed many miracles to him and the shrine and remains of his body was long disputed.   In 1600 the Servants of Mary of Florence came forward to reclaim his relics and obtained the them, leaving to the villagers only one arm as a relic.   Countless other diatribes followed until in 1822 when the body was returned to the community of Monticchiello where it is still preserved in a valuable urn in the church of St Leonardo.

Every year the villagers go in procession to the upper entrance of the cave to pray in the place designated as “the bed of the Blessed,” where a plaque and a cross (still existing) were walled on the occasion of the fifth centenary of the death, 9 May 1926.

The most famous miracle of Blessed Benincasa is that of the “footsteps of the devil” – it is said that the saint was frequently prey to the temptations of the devil who presented himself in the classic appearance of a goat.   With his ascetic strength, Benincasa chased him away and forced him to leave, taking a leap beyond the deep abyss that overlooks the stream.   The devil left his footprints in the living rock and these are visible not far from the upper entrance.

According to the records of the time, when Blessed Giovanni died, all the bells of Monticchiello and the nearby districts began to ring by themselves. 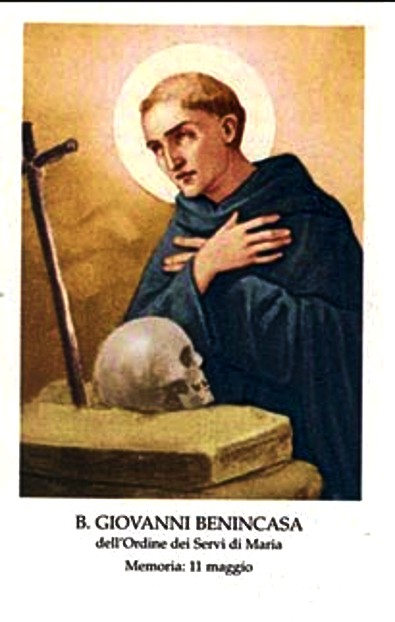 Martyrs of Persia:  310 Christians murdered together for their faith in Persia. No details about them have survived.

20 Mercedarian Martyrs of Riscala:  20 Mercedarian friars who were murdered by Huguenot heretics for refusing to denounce their faith. 16th century at the Santa Maria convent at Riscala, France.