Our Lady of Pignerol, is also known as Our Lady of Pinerolo, Notre-Dame de Piedmont and Madonna delle Grazie di Pinerolo. The Shrine was built in honour of the Assumption of the Blessed Virgin in the year 1098, by Adelaide, Countess of Savoy. It is a National Shrine of Savoy.
Pinerolo is a Town in northern Italy near Turin in a region historically known as Savoy, which was annexed to France. The Town itself began just over 1,000 years ago, due to its central location along a trade route that ran between France and Italy.
The pious and far-seeing Countess anticipated, by almost one thousand years, the Dogma of the Assumption of Our Lady. Mary was publicly honoured under this beloved title and frequently repaid the generosity of her devout Adelaide, by answering the pleas of her children, crying to her for help in every need. Answering their prayers, curing their ills and obtaining miracles for the faithful, where human aid was despaired of,but where faith always conquered. When the Assumption of Our Lady was proclaimed a Dogma, the rejoicing at the Pignerolo Shrine was indescribable.
Venerable Pope Pius XII, on 1 November 1950, solemnly proclaimed:

“By the authority of Our Lord Jesus Christ, of the Blessed Apostles Peter and Paul and by our own authority, we pronounce, declare and define it to be a divinely revealed Dogma: that the Immaculate Mother of God, the ever Virgin Mary, having completed the course of her earthly life, was assumed body and soul into heavenly glory.”

Although this declaration of Pope Pius XII was made “ex cathedra,” belief in the Assumption of the Blessed Virgin Mary was a commonly held belief among early Catholics and the Fathers of the Church. In the Apocalypse of Saint John, Chapter 12, the woman mentioned is said to be an allusion to both the Church and our Blessed Mother:

“And a great sign appeared in heaven – A woman clothed with the sun,and the moon under her feet and on her head a crown of twelve stars; and being with child, she cried travailing in birth and was in pain to be delivered.”

This passage is generally interpreted as the Church being clothed with the Son, or Son of God, while Our Lady has the moon beneath her feet, representing the things of the material world. She is crowned with 12 stars, the Apostles and is in labour to bring forth the children of God, amidst a world full of affliction and misery.

The Shrine celebrates Our Lady annually on 15 November.

Blessed Lucia (Lucy) of Narni OP (1476-1544) Virgin, Tertiary of the Order of Preachers, Mystic, Stigmatist, Her body is incorrupt.

Bl Miguel Díaz Sánchez
St Paduinus of Le Mans
Bl Richard Whiting
Bl Roger James
St Shamuna of Edessa
St Sidonius of Saint-Saens
—
Martyrs of Hippo – 20 saints: 20 Christians martyred together and celebrated by Saint Augustine. The only details about them to survive are three of the names – Fidenziano, Valerian and Victoria. Hippo, Numidia (in north Africa).

Martyrs of North Africa – 3 saints: A group of Christians murdered for their faith in imperial Roman north Africa. The only details that have survived are the names of three of them – Fidentian, Secundus and Varicus.

REFLECTION – “The kingdom of God according to our Lord and Saviour’s word “does not come with signs to be observed, nor will they say, ‘Lo, here it is!’ or ‘There!’ but the kingdom of God is within us”.   For the Word “is very near, in our mouth and in our heart” (cf. Dt 30:14; Rm 10:8).  So it is clear, that the one who prays that the kingdom of God may come, prays that the kingdom of God may spring up in him, bear fruit and be rightly perfected.   This is because every saint is ruled by God, obeys the spiritual laws of God and dwells in himself as in a well-ordered city.   The Father is present with him and Christ rules with the Father, in his perfected soul, in accord with the verse we called to mind a little earlier, “We will come to him and make our home with him” (Jn 14:23).
As we make continual progress, the highest point of the kingdom of God will be established for us when the apostle Paul’s word is fulfilled, when Christ with all His enemies made subject to Him will deliver “the kingdom to God the Father … that God may be all in all” (1 Cor 15:24, 28).
Therefore, let us pray constantly (cf. Thess 5:17) with a character being divinised by the Word and let us say to our Father in heaven, “hallowed be your name, your kingdom come” (Mt 6:9).”…Origen (c 185-253) Father of the Church

PRAYER – Our Father, hallowed be Your name, Your kingdom come, Your will be done! Grant us Lord, a true knowledge of our salvation, so that freed from fear and from the power of our foes, we may serve You faithfully, all the days of our lives and thus attain eternal joy with You.   May the prayers of St Albert and St Leopold on our behalf, be a succour to us all.   Through our Lord Jesus Christ with the Holy Spirit, one God for all eternity, amen. 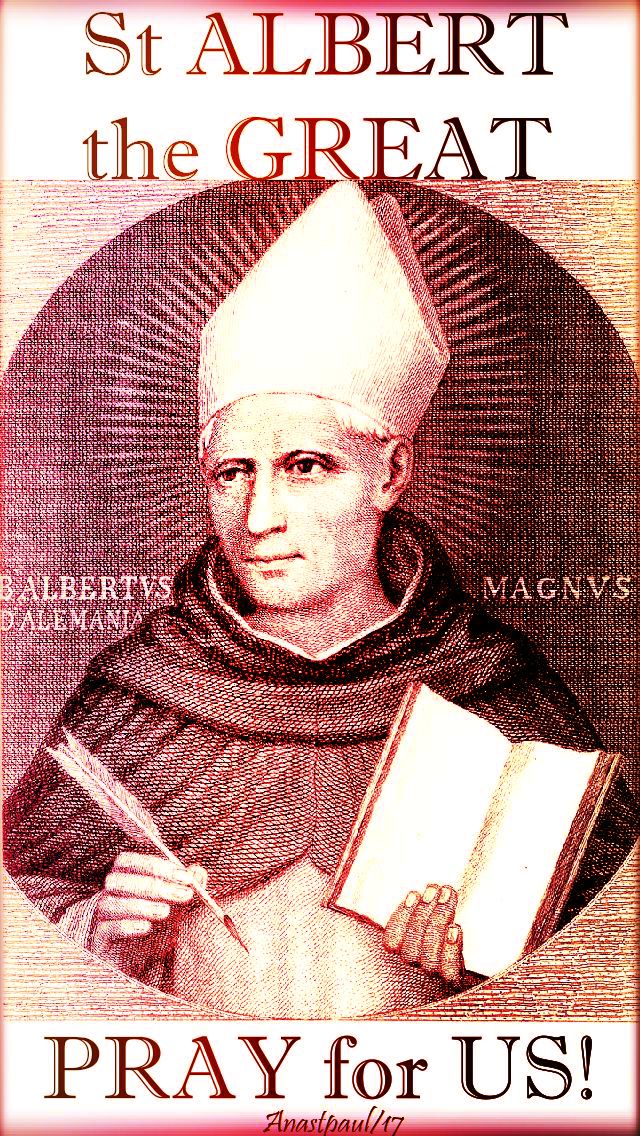 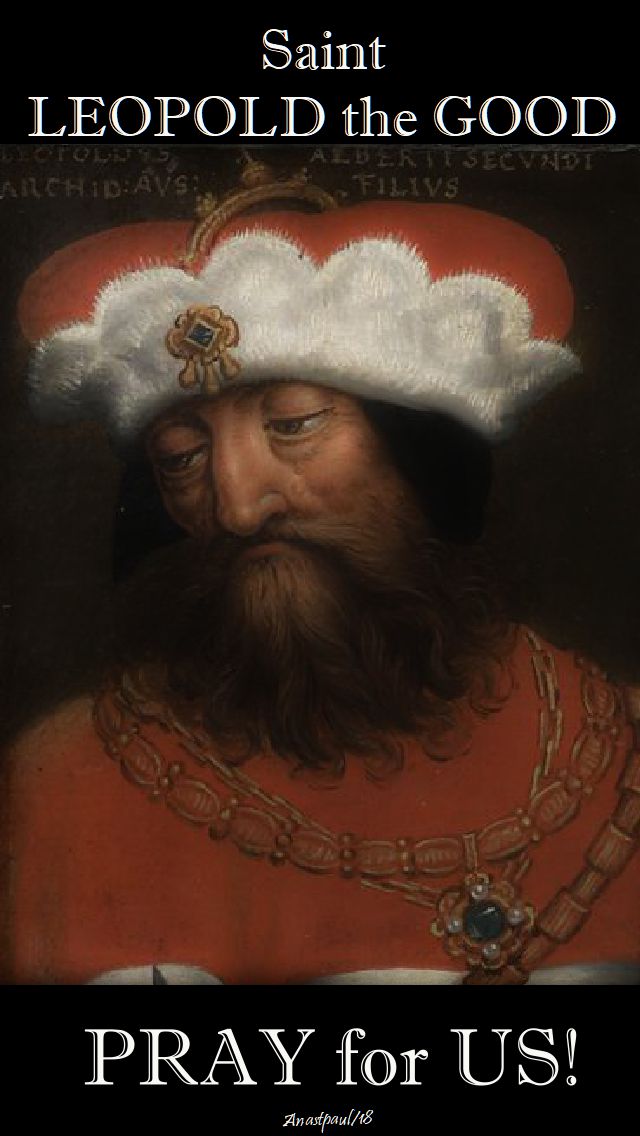 Saint of the Day – 15 November – St Leopold III (1073-1136) – “Leopold the Good” Margrave of Austria (the Margraviate of Austria was a southeastern frontier march (borderland) of the Holy Roman Empire created in 976 out of the territory on the border with the Principality of Hungary) – born in 1073 at Melk, Lower Austria, Austria and died in 1136 at the abbey of Klosternburg, Niederosterrich, Austria of natural causes. Patronages – against the death of children, large families, Lower Austria, step-parents, Austria (since 1663 but officially proclaimed on 17 December 1913 by Pope Pius X), Upper Austria, Abetone, Italy. 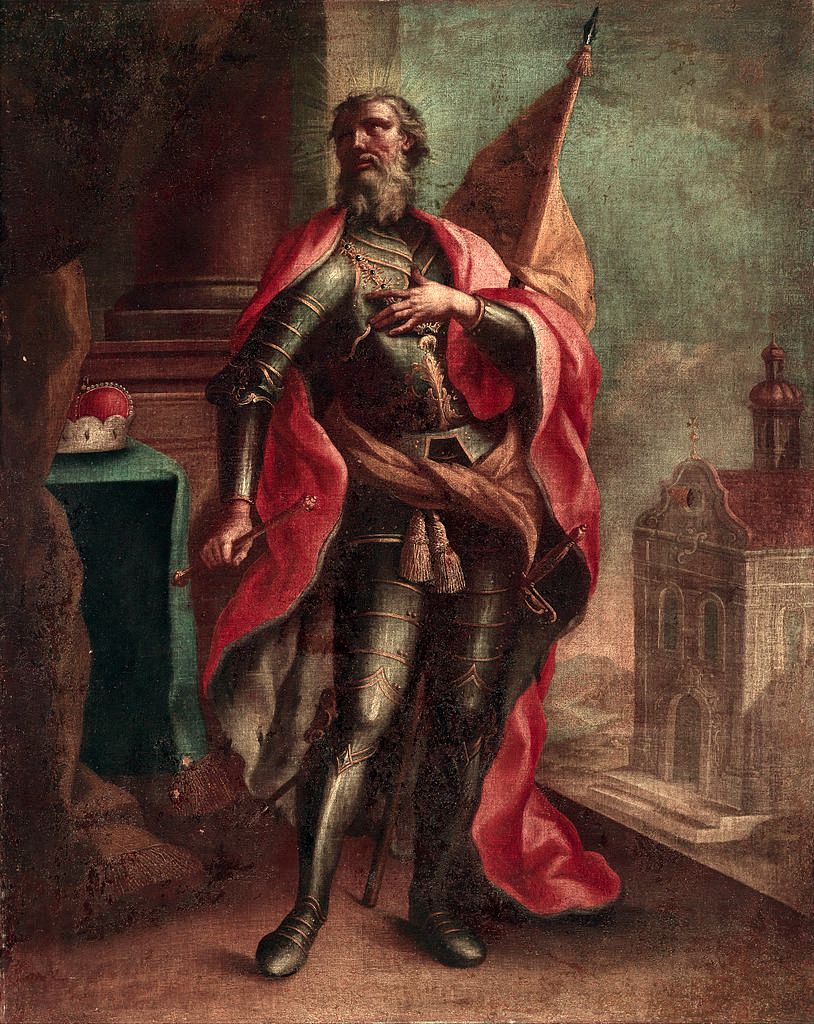 Leopold was born at Babenberg castle in Gars am Kamp, the son of Margrave Leopold II and Ida of Formbach-Ratelnberg.   The Babenbergs came to Austria from Bavaria where the family had risen to prominence in the 10th Century.   He grew up in the diocese of Passau under the influence of the reformer Bishop Altmann of Passau.

In 1096 Leopold succeeded his father as Margrave of Austria at the age of 23.   He married twice.   His first wife, who died in 1105, may have been one of the von Perg family.   The following year he married Agnes, the widowed sister of Emperor Henry V whom he had supported against her father Henry IV.   This connection to the Salians raised the importance of the House of Babenberg, to which important royal rights over the Margravate of Austria were granted.   Also, Agnes had influential connections through her previous marriage to Frederick of Hohenstaufen, one of her sons being Conrad III of Germany.

Leopold called himself “Princeps Terræ”, a reflection of his sense of territorial independence.   He was considered a candidate in the election of the Kaiser of the Holy Roman Empire in 1125 but declined this honour.

He is mainly remembered for the development of the country and, in particular, the founding of several monasteries.   His most important foundation is Klosterneuburg (1108).   According to legend, the Virgin Mary appeared to him and led him to a place where he found the veil of his wife Agnes, who had lost it years earlier.   He established the Klosterneuburg Monastery there.   He subsequently expanded the settlement to become his residence.   Leopold also founded the monasteries of Heiligenkreuz, Kleinmariazell and Seitenstetten which developed a territory still largely covered by forest.   All of these induced the church to Canonise him in 1485. 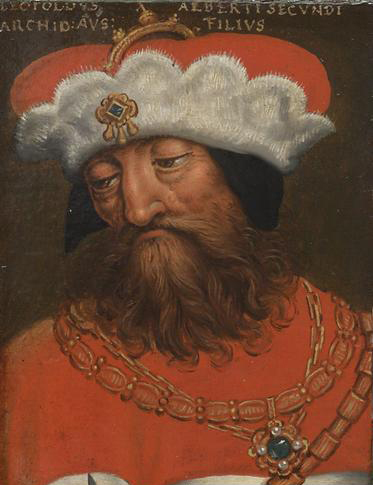 Leopold also fostered the development of cities, such as Klosterneuburg, Vienna and Krems.   The writings of Henry of Melk and Ava of Göttweig, which are the first literary texts from Austria, date back to Leopold’s time.

He is buried in the Klosterneuburg Monastery, which he founded.   His skull is kept in an embroidered reliquary, which leaves the forehead exposed, it also wears an archducal crown.

In 1663, under the rule of his namesake Emperor Leopold I, he was declared patron saint of Austria instead of Saint Koloman.

The brother, Joseph and Michael Haydn, each of whom sang in the choir of St Stephen’s Cathedral, both sang in that capacity at Klosterneuburg on this day.   Joseph Haydn later became the more famous composer of the two.   Michael Haydn later (1805) wrote a Mass in honour of Leopold, the Missa sub titulo Sancti Leopoldi.

St Leopold was Canonised on 6 January 1485 by Pope Innocent VIII.