Saint of the Day – 15 November – St ALBERTUS MAGNUS/Albert the Great OP (1200-1280) Doctor of the Church – Doctor universalis (Universal Doctor) – Priest and Friar of the Order of Preachers, Bishop, Theologian, Scientist, Philospher, Teacher, Writer.   Born in c 1200 at Lauingen an der Donau, Swabia (part of modern Germany) – 15 November 1280 at Cologne, Prussia (part of modern Germany) of natural causes.   Patronages – • medical technicians• natural sciences• philosophers• schoolchildren• scientists (proclaimed on 13 August 1948 by Pope Pius XII)• students• theology students.    St Albert was Beatified in 1622 by Pope Gregory XV and Canonised and created a Doctor of the Church in 1931 by Pope Pius XI.   St Albert was known during his lifetime as Doctor universalis and Doctor expertus and, late in his life, the sobriquet Magnus was appended to his name. Scholars have referred to him as the greatest German philosopher and theologian of the Middle Ages.

Born around 1206 in Launingen, Germany, Albert was educated as a young man at the University of Padua, and joined the Dominican Order in 1223.   He spent the following years engaged in various studies and teaching assignments in several German cities, most prominently Cologne.   He left Cologne for the University of Paris in 1245.

It was there that one of his students, a brilliant if quiet and heavy-set young man was so impressed by him that he later accompanied him back to Cologne and later became his most famous pupil!   Albert said of his student, St Thomas Aquinas, after St. Thomas’ remarkable explanation of a difficult treatise, “We call this young man a dumb ox but one day his bellowing in his teaching will be heard throughout the world.” 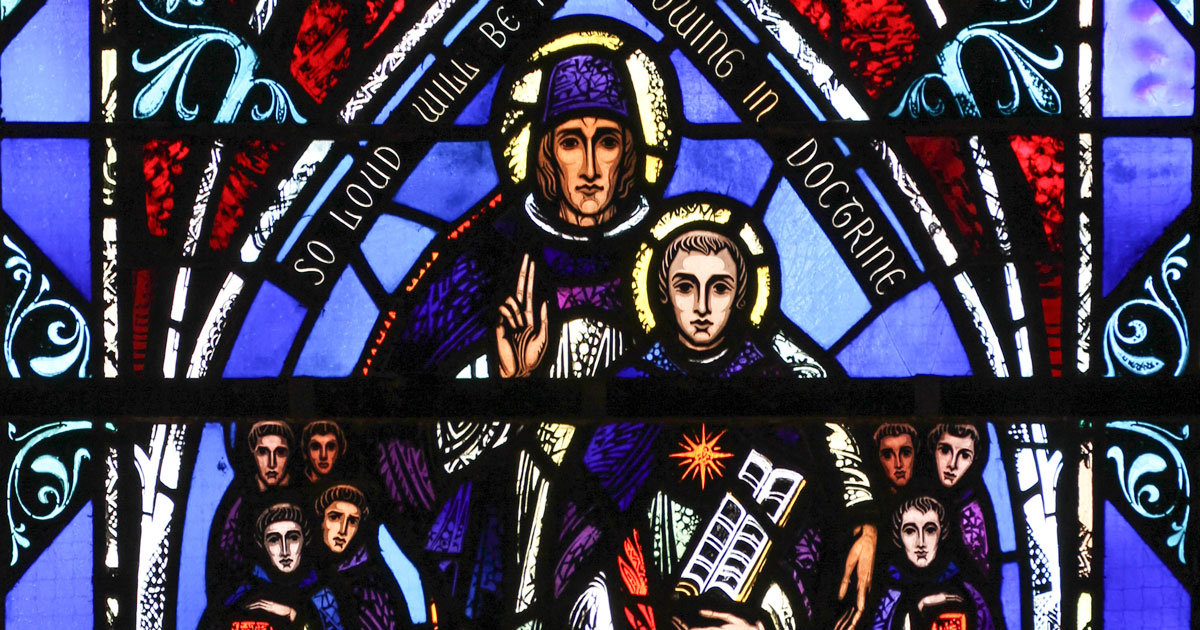 Not that St Albert wasn’t an intellectual heavyweight in his own right.   He was known as Albertus Magnus (Albert the Great).   St Albert can truly be called a Renaissance man, a century before the Renaissance actually began!   This Dominican friar and bishop was also known for his scholarly contributions to the sciences and philosophy as well as theology.   The publication of his complete writings in Paris in 1899 came to 38 volumes and covered his extensive knowledge of such diverse subjects as theology, botany, astronomy, mineralogy, alchemy (the forerunner of chemistry), justice and law among others!   He was the first to comment on virtually all of the writings of Aristotle, thus making them accessible to wider academic debate.   The study of Aristotle brought him to study and comment on the teachings of Muslim academics, notably Avicenna and Averroes and this would bring him into the heart of academic debate.

In 1254 Albert was made provincial of the Dominican Order and fulfilled the duties of the office with great care and efficiency.   During his tenure he publicly defended the Dominicans against attacks by the secular and regular faculty of the University of Paris, commented on John the Evangelist and answered what he perceived as errors of the Islamic philosopher Averroes.

In 1259 he took part in the General Chapter of the Dominicans at Valenciennes together with Thomas Aquinas, masters Bonushomo Britto, Florentius, and Peter (later Pope Innocent V) establishing a ratio studiorum or program of studies for the Dominicans that featured the study of philosophy as an innovation for those not sufficiently trained to study theology.   This innovation initiated the tradition of Dominican scholastic philosophy put into practice, for example, in 1265 at the Order’s studium provinciale at the convent of Santa Sabina in Rome, out of which would develop the Pontifical University of Saint Thomas Aquinas, the “Angelicum”

In 1260 Pope Alexander IV made him bishop of Regensburg, an office from which he resigned after three years.   During the exercise of his duties he enhanced his reputation for humility by refusing to ride a horse, in accord with the dictates of the Order, instead traversing his huge diocese on foot.   This earned him the affectionate sobriquet “boots the Bishop” from his parishioners.   In 1263 Pope Urban IV relieved him of the duties of bishop and asked him to preach the eighth Crusade in German-speaking countries.  After this, he was especially known for acting as a mediator between conflicting parties.   In Cologne he is not only known for being the founder of Germany’s oldest university there but also for “the big verdict” (der Große Schied) of 1258, which brought an end to the conflict between the citizens of Cologne and the archbishop.   Among the last of his labours was the defense of the orthodoxy of his former pupil, Thomas Aquinas, whose death in 1274 grieved Albert (the story that he travelled to Paris in person to defend the teachings of Aquinas can not be confirmed).

After suffering a collapse of health in 1278, he died on 15 November 1280, in the Dominican convent in Cologne, Germany.   Since then 15 November 1954, his relics are in a Roman sarcophagus in the crypt of the Dominican St Andreas Church in Cologne. Although his body was discovered to be incorrupt at the first exhumation three years after his death, at the exhumation in 1483 only a skeleton remained.

Pope Pius XI, when he canonised him in 1931, said he had “that rare and divine gift, scientific instinct, in the highest degree.”   Like St Thomas, he was very much influenced by Aristotle in seeing the compatibility of natural sciences and philosophy with theology. Also like his star pupil, he rightly saw God’s hand behind all creation!