Leo is called Great in large part because he saved the city of Rome on two separate occasions.   But far more noteworthy is his work safeguarding the Roman and apostolic faith from the confusion of so many different figures.   Since Christ as perfect Man reveals man to himself (concerning which Vatican II reminds us in Gaudium et Spes §22), understanding Christ’s dignity is essential for recognising our own as restored and elevated in the grace He has won for us.

Preserving and transmitting this teaching does not usually oblige us to face the barbarians at the gates.   In the face of those who would obscure the truth, our call—Pope Leo’s call—is to put on what St Paul calls “the mind of Christ.”   Embracing what we ourselves have received, we can be tailored to His understanding of us, rather than our conjectures about Him.   There are only two choices: we can either remember Him Whose members we are in the Body of Christ, or slide into the grave danger highlighted by John Courtney Murray, SJ:

“Self-understanding is the necessary condition of a sense of self-identity and self-confidence, whether in the case of an individual or in the case of a people… Otherwise the peril is great. The complete loss of one’s identity is, with all propriety of theological definition, hell.   In diminished forms it is insanity.”

As to insanity, some would say riding out to meet a barbarian without an army fits the bill.   But knowing himself and the One who called him, Pope Leo could ride out to Attila, confident that the Hun’s efforts would amount to an empire built on sand, a mass of broken lives and a brief (but memorable) footnote in the textbooks….(Br Leo Camurati OP)

St Pope Leo the Great Pray for us, that we may build our houses upon the Rock of Christ and His Church!

“Peter has spoken by the mouth of Leo.”

“Those who are not good to others
are bad to themselves.”

“The faith of those who LIVE
their faith is a serene faith.
What you long for will be given you;
what you love will be yours for ever.”

“Our sharing in the Body and Blood of Christ
has no other purpose than to transform us
into that which we receive.”

“God decreed that all nations should be saved in Christ.
Dear friends, now that we have received instruction
in this revelation of God’s grace, let us celebrate
with spiritual joy the day of our first harvesting,
of the first calling of the Gentiles.
Let us give thanks to the merciful God,
“who has made us worthy,” in the words of the Apostle,
“to share the position of the saints in light;
who has rescued us from the power of darkness
and brought us into the kingdom of this beloved Son.”
This came to be fulfilled, as we know, from the time
when the star beckoned the three wise men
out of their distant country and led them to recognise
and adore the King of heaven and earth.
The obedience of the star calls us
to imitate its humble service:
to be servants, as best we can,
of the grace that invites all men to find Christ.”

“The cross of Christ is the true ground
and chief cause of Christian hope.”

“Let no one be ashamed of the cross
by which Christ has redeemed the world.
None of us must be afraid to suffer
for the sake of justice or doubt the
fulfillment of the promises,
for it is through toil that we come to rest
and through death that we pass to life.”

“By Baptism we are made flesh of the Crucified.”

“No-one, however weak, is denied
a share in the victory of the cross.
No-one is beyond the help
of the prayer of Christ.” 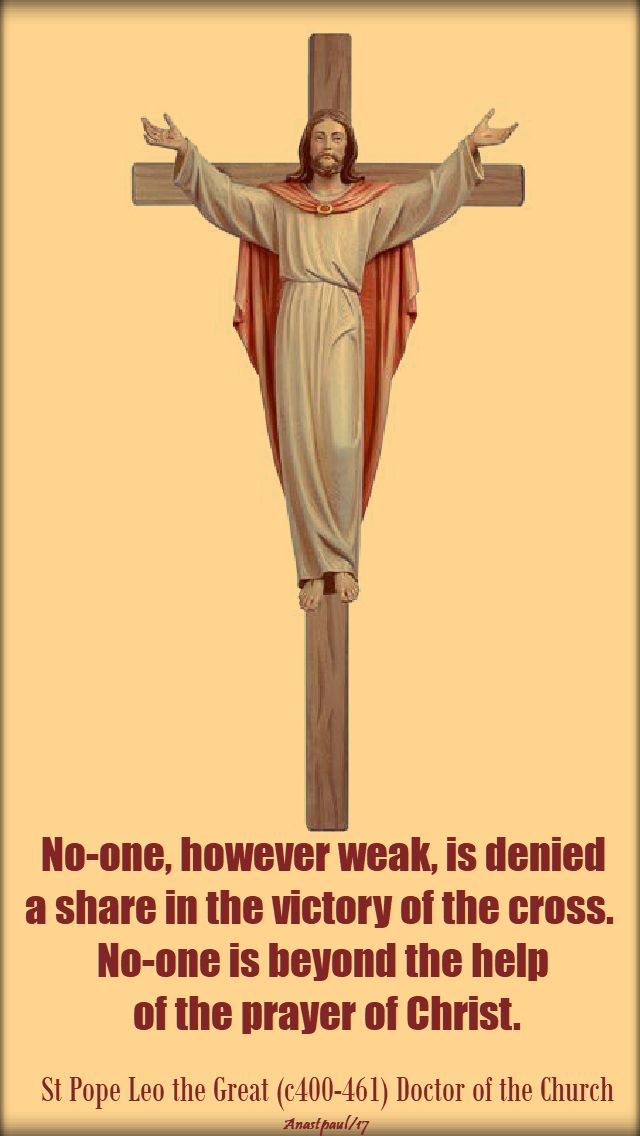 No temptation has overtaken you, that is not common to man. God is faithful and he will not let you be tempted beyond your strength but with the temptation, will also provide the way of escape, that you may be able to endure it....1 Corinthians 10:13

REFLECTION – “Virtue is nothing without the trial of temptation, for there is no conflict without an enemy, no victory without strife.”…St Pope Leo the Great (c 400-461)

PRAYER – Lord God, You built Your Church on the firm foundation of the Apostle Peter and You promised that the gates of hell would never overcome it. So too, may we trust in Your power, that by our faith we may receive the grace to withstand the enemy who will not prevail against us. May your Holy Spirit grant us the grace of fortitude to withstand our temptations, supported by the prayers of St Pope Leo the Great, keep us ever faithful to Your love. Amen

Grant to us, O Lord,
not to mind earthly things
but rather to love heavenly things,
that while all things around us pass away,
we even now may hold fast
to those things which last forever.
Amen

Saint of the Day – 10 November – St Pope Leo I Doctor of the Church (c 400 – 461)  Born in Tuscany, he became Pope in the year 440.   He was a true father and shepherd of his people.   He constantly strove to preserve the integrity of the faith, defended the unity of the Church, repelled or alleviated the incursions of the barbarians and, in very truth, he is called the GREAT!  (Born c 400 at Tuscany, Italy – 461 at Rome).  He was a Roman aristocrat and was the first pope to have been called “the Great”.   He is perhaps best known for having met Attila the Hun in 452 and persuading him to turn back from his invasion of Italy.   He is also a Doctor of the Church, most remembered theologically for issuing the Tome of Leo, a document which was a major foundation to the debates of the Ecumenical Council of Chalcedon.   The Council of Chalcedon, the fourth ecumenical council, dealt primarily with Christology, and elucidated the orthodox definition of Christ’s being as the hypostatic union of two natures, divine and human, united in one person, “with neither confusion nor division”.

Only two popes have earned the title Great—Gregory I and Leo I. Leo was born in the beginning of the fifth century.   When he was a deacon, other church leaders looked to him for advice and for explanations of the faith.   Leo was sent to settle arguments between leaders.   With strong conviction of the importance of the Bishop of Rome in the Church and of the Church as the ongoing sign of Christ’s presence in the world, Leo the Great displayed endless dedication as pope. Elected in 440, he worked tirelessly as “Peter’s successor,” guiding his fellow bishops as “equals in the episcopacy and infirmities.”

Leo is known as one of the best administrative popes of the ancient Church.  His work branched into four main areas, indicative of his notion of the pope’s total responsibility for the flock of Christ.   He worked at length to control the heresies of Pelagianism–overemphasizing human freedom– Manichaeism–seeing everything material as evil–and others, placing demands on their followers so as to secure true Christian beliefs.

A second major area of his concern was doctrinal controversy in the Church in the East, to which he responded with a classic letter setting down the Church’s teaching on the two natures of Christ.   With strong faith, he also led the defense of Rome against barbarian attack, taking the role of peacemaker. 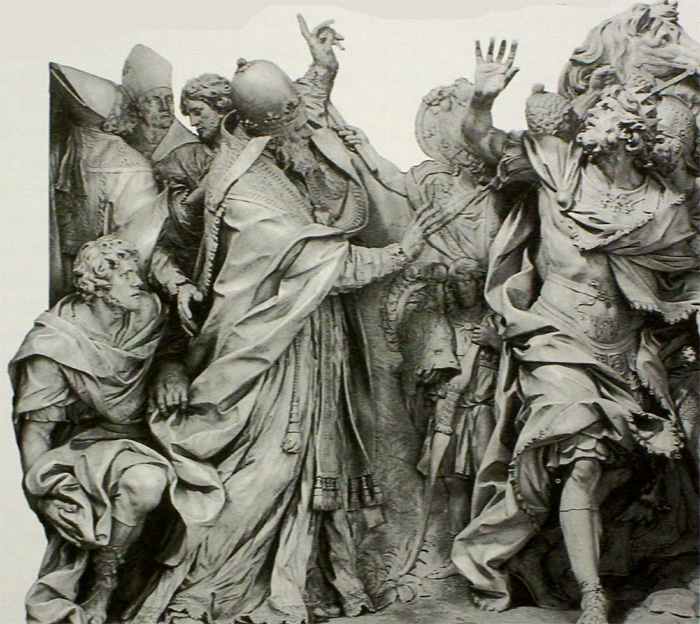 In these three areas, Leo’s work has been highly regarded.   His growth to sainthood has its basis in the spiritual depth with which he approached the pastoral care of his people, which was the fourth focus of his work.  He is known for his spiritually profound sermons.   An instrument of the call to holiness, well-versed in Scripture and ecclesiastical awareness, Leo had the ability to reach the everyday needs and interests of his people.   One of his sermons is used in the Office of Readings on Christmas.   Almost 100 sermons and 150 letters of Leo I have been preserved.

It is said of Leo that his true significance rests in his doctrinal insistence on the mysteries of Christ and the Church and in the supernatural charisms of the spiritual life given to humanity in Christ and in his Body, the Church.  Thus Leo held firmly that everything he did and said as pope for the administration of the Church represented Christ, the head of the Mystical Body and Saint Peter, in whose place Leo acted.

Leo died on 10 November 461 and, as he wished to be buried as close as possible to the tomb of St Peter, his body was placed in a tomb in the portico of St Peter’s basilica.   In 688 his remains were moved inside the basilica itself.

Pope Emeritus Benedict XVI said that Leo’s papacy “…was undoubtedly one of the most important in the Church’s history.”

The significance of Leo’s pontificate lies in his assertion of the universal jurisdiction of the Roman bishop, as expressed in his letters and still more in his 100 extant orations. This assertion is commonly referred to as the doctrine of Petrine supremacy.

According to Leo and several Church Fathers as well as certain interpretations of the Scriptures, the Church is built upon Peter, in pursuance of the promise of Matthew 16:16–19.    Peter participates in everything which is Christ’s;  what the other apostles have in common with him they have through him.   What is true of Peter is true also of his successors.   Every other bishop is charged with the care of his particular flock, the Roman pontiff with that of the whole Church.   Other bishops are his assistants in this great task.   In Leo’s eyes the decrees of the Council of Chalcedon acquired their validity from his confirmation.

Leo’s letters and sermons reflect the many aspects of his career and personality and are invaluable historical sources.   His rhythmic prose style, called cursus leonicus, influenced ecclesiastical language for centuries.

In 1754 Pope Benedict XIV proclaimed Leo I a Doctor of the Church.

Martyrs of Agde – 3 saints: A group of Christians who were tortured and martyred together in the persecutions of Diocletian. The only about them to survive are the names – Florentia, Modestus and Tiberius. Martyred c 303 in Agde, France.