Today, November 11, we celebrate the feast day of Saint Martin of Tours (also known as “Martin the Merciful” and the “Glory of Gaul,”), bishop, teacher, apostle of charity.   Saint Martin saw himself as a member of the “Army of God,” not the army of man.   Zealous in his love for the Lord, he served (sometimes reluctantly, but ever obediently) those in need and those who sought him out, for his eight-one years on the earth.   Remembered for his great charity, Saint Martin inspires us still today to help those in need, as Christ would have helped them.

Martin’s worry about cooperation with evil reminds us that almost nothing is either all black or all white.   The saints are not creatures of another world.   They face the same perplexing decisions that we do.   Any decision of conscience always involves some risk. If we choose to go north, we may never know what would have happened had we gone east, west, or south.   A hyper-cautious withdrawal from all perplexing situations is not the virtue of prudence; it is in fact, a bad decision, for “not to decide is to decide.”

St Martin of Tours, pray for us!

“In the name of the Lord Jesus and protected
only by the sign of the cross,
without shield or helmet,
I shall penetrate the enemy’s ranks
and not be afraid.”

Remember your leaders who preached the word of God to you and as you reflect on the outcome of their lives, imitate their faith….Hebrews 13:7-8

REFLECTION – ““I have served you as a soldier. Let me now serve Christ.   Give the bounty to these others who are going to fight but I am a soldier of Christ and it is not lawful for me to fight.”…St Martin of Tours

PRAYER – Lord God, You were glorified by the life and death of St Martin.   Renew the wonders of Your grace in our hearts so that neither death nor life may separate us from Your love.  Through our Lord, Jesus Christ, with You in union with the Holy Spirit, one God for all eternity.  St Martin, continue to intercede for us, amen.

Lord, if Your people still have need
of my services,
I will not avoid the toil.
Your will be done.
I have fought the good fight long enough.
Yet if You bid me continue to hold
the battle line in defense
of Your camp,
I will never beg to be excused
from failing strength.
I will do the work You entrust to me.
While You command,
I will fight beneath Your banner.
Amen

Saint of the Day – 11 November – St Martin of Tours (c 316-397) Bishop, Confessor, Miracle-Worker, Apostle of Charity (c 316 at Upper Pannonia (in modern Hungary) – 8 November 397 at Candes, Tours, France of natural causes).   By his request, he was buried in the Cemetery of the Poor on 11 November 397.  Patronages – • against alcoholism• against impoverishment• against poverty• beggars• cavalry• equestrians• geese• horse men• horses• hotel-keepers• innkeepers• Pontifical Swiss Guards• quartermasters• reformed alcoholics• riders• soldiers• tailors• vintners• wine growers• wine makers• France• 5 dioceses• 31 cities.   Attributes – • apparition of Our Saviour• globe of fire• goose• man on horseback sharing his cloak with beggar• man cutting cloak in half• man holding aloft a sword and cloak• alms.   His relics rested in the basilica of Tours, a scene of pilgrimages and miracles, until 1562 when the cathedral and relics were destroyed by militant Protestants.   Some small fragments on his tomb were found during construction excavation in 1860.    His shrine in France became a famous stopping-point for pilgrims on the road to Santiago de Compostela in Spain.   He has become one of the most familiar and recognisable Christian saints, sometimes venerated as a military saint.   As he was born in what is now Szombathely, Hungary, spent much of his childhood in Pavia, Italy, and lived most of his adult life in France, he is considered a spiritual bridge across Europe.
His life was recorded by a contemporary, the hagiographer Sulpicius Severus.   He is best known for the account of his using his military sword to cut his cloak in two, to give half to a beggar clad only in rags in the depth of winter.  Conscripted as a soldier into the Roman army, he found the duty incompatible with the Christian faith he had adopted and became an early conscientious objector.

A conscientious objector who wanted to be a monk;  a monk who was manoeuvred into being a bishop;  a bishop who fought paganism as well as pleaded for mercy to heretics—such was Martin of Tours, one of the most popular of saints and one of the first not to be a martyr.

Born of pagan parents in what is now Hungary and raised in Italy, this son of a veteran was forced at the age of 15 to serve in the army.   Martin became a Christian catechumen and was baptised when he was 18.   It was said that he lived more like a monk than a soldier.   At 23, he refused a war bonus and told his commander:  “I have served you as a soldier;  now let me serve Christ. Give the bounty to those who are going to fight. But I am a soldier of Christ and it is not lawful for me to fight.”   After great difficulties, he was discharged and went to be a disciple of Hilary of Poitiers.

He was ordained an exorcist and worked with great zeal against the Arians.   Martin became a monk, living first at Milan and later on a small island.   When Hilary was restored to his see following his exile, Martin returned to France and established what may have been the first French monastery near Poitiers.   He lived there for 10 years, forming his disciples and preaching throughout the countryside.

The people of Tours demanded that he become their bishop.   Martin was drawn to that city by a ruse—the need of a sick person—and was brought to the church, where he reluctantly allowed himself to be consecrated bishop.   Some of the consecrating bishops thought his rumpled appearance and unkempt hair indicated that he was not dignified enough for the office. 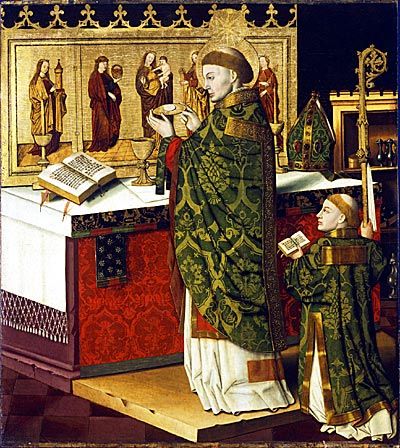 One of the most famous stories about Martin of Tours occurred when he was still a soldier.   One day, it is said, he met a beggar wearing rags.   He took his sword and cut his military cloak in half and gave half to the poor man for his warmth.   That night, Martin dreamed that Jesus was wearing the half of a cloak he had given away.   During the Middle Ages, Martin’s cloak (cappa) became a relic that French kings would take into battle.   The person whose job it was to care for the cloak was often a priest and he was called a cappellani.   It is from this that the word “chaplain” evolved.

As death approached, Martin’s followers begged him not to leave them.  He prayed, “Lord, if your people still need me, I do not refuse the work. Your will be done.” 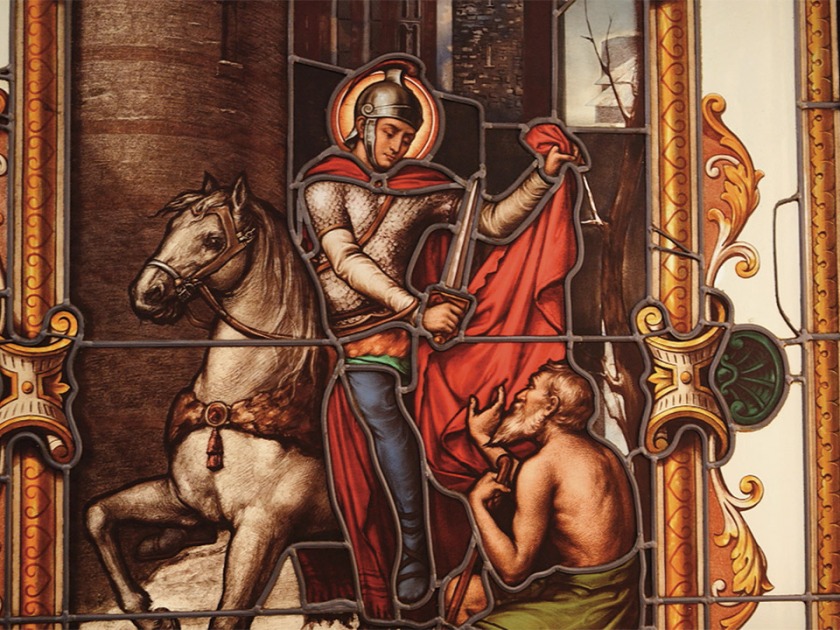