Benedict Joseph Labre was truly eccentric, one of God’s special little ones.   Born in France and the eldest of 18 children, he studied under his uncle, a parish priest.   Because of poor health and a lack of suitable academic preparation he was unsuccessful in his attempts to enter the religious life.   Then, at age 16, a profound change took place. Benedict lost his desire to study and gave up all thoughts of the priesthood, much to the consternation of his relatives.

He became a pilgrim, traveling from one great shrine to another, living off alms.   He wore the rags of a beggar and shared his food with the poor.   Filled with the love of God and neighbour, Benedict had special devotion to the Blessed Mother and to the Blessed Sacrament.   In Rome, where he lived in the Colosseum for a time, he was called “the poor man of the Forty Hours devotion” and “the beggar of Rome.”

On 16 April 1783, the last day of his life, Benedict dragged himself to a church in Rome and prayed there for two hours before he collapsed, dying peacefully in a nearby house. Immediately after his death, the people proclaimed him a saint.

Benedict Joseph Labre was canonised by Pope Leo XIII in 1881.

St Benedict’s life reminds us that the Lord loves and has a beautiful plan for all His creations, despite what society may judge or view them as.   I, personally, do not regard him as being mentally ill, though many do and he is the Patron of mental illness and against insanity.   For me, his mission was simply a striving, throughout his life to grow closer to the Lord, to serve Him through his neighbour and to serve as an example for others.   I see shades of St Francis and many other Saints.   He faced multiple rejections with grace and eventually changed his plan in obedience to God, never giving up his search for holiness.   We are challenged by the life of this saint to consider our own actions, both when we encounter difficulties in our lives that prevent us from following what we perceive to be the will of God and also when we encounter those individuals in our communities who society has written off, marginalised and judged as ‘less than’ and ‘unworthy’.

My thought is this, that if we seek Christ who sought us first, we will find Him, for He is right beside us, whatever our circumstances.   St Benedict found Him, in his neighbour and waiting quietly, in the Real Presence of the Blessed Sacrament, as He waits for you and me. 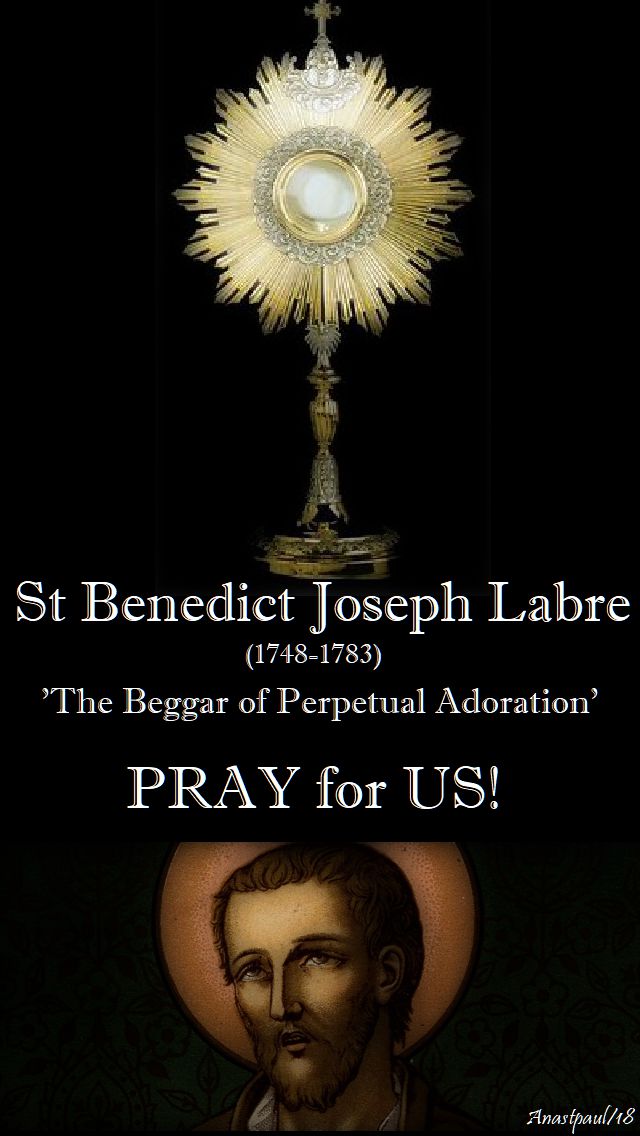