St. John Berchmans was born in 1599, the son of a shoemaker, in what is now Belgium. He was the oldest of five children and grew up during a time of religious turmoil in the Netherlands. When John was nine years old, his mother was stricken with a long and serious illness. John would pass several hours each day by her bedside. In 1615, the Jesuits opened a college near his home and Berchmans was one of the first to enroll. He immediately enrolled in the Sodality of the Blessed Virgin. When John wrote his parents that he wished to join the Society of Jesus, his father rushed to the school to dissuade him and sent him to a Franciscan convent. At the convent, a friar who was related to John, also attempted to change his mind.

Despite their efforts, John entered the Jesuit novitiate the next year. He was affable, kind and endowed with an outgoing personality that endeared him to everyone. He requested after ordination to become a chaplain in the army, hoping to be martyred on the battlefield. He made his first vows and went to Antwerp, then Rome, to study philosophy. Five years later, Berchman succumbed to dysentery and fever at the age of twnety-two. That same year, Phillip-Charles, Duke of Aarschot, began the process of beatification.

Berchman’s heart was returned to his beloved province in Belgium where it is kept in a silver reliquary on a side altar in the church at Leuven (Louvain). He was beatified in 1865 and canonized in 1888. Statues frequently depict him with hands clasped, holding his crucifix, his book of rules and his rosary. He is venerated today as the patron of both altar servers and Jesuit students 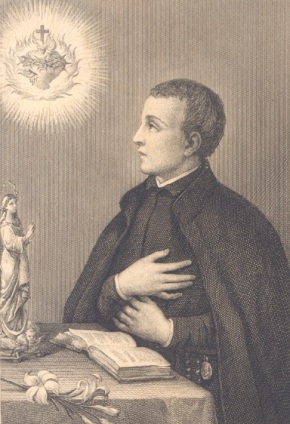 One thought on “Saint of the Day 26 November”