Saint of the Day – 11 January – St Theodosius the Cenobiarch (423-529)  died aged 106), Hermit/ AbboT/Founder of the Cenobitical Communities.   Roughly translated, cenobitical means “people who have a life in common,” and refers to the monks who joined Saint Theodosius’ community.   These monks, of many nationalities, devoted themselves to the Lord, but did not remain in seclusion.  Rather, they socialized and interacted with the outside world, which was a new approach to monasticism at that time!

Theodosius was born to pious parents in Mogarissos, Cappadocia (modern Turkey). Attracted to the academic life, he began his studies at an early age, impressing all with his intellect and mind and became a lector while still young.   Even as a child, he felt a desire to imitate Abraham by leaving his parents, friends, relatives and everything else for the love of God.   Acting upon his calling, Theodosius left home and set out for Jerusalem at the time of the Holy Fourth Ecumenical Council of Chalcedon held in 451.    After visiting the holy places, he decided to lead a life of prayer. He asked the guidance of a holy man named Abbot Longinus.   Soon people realized how holy Theodosius himself was.   Many men asked to join him.   To escape the steady stream of pilgrims, Theodosius withdrew further into the wilderness, settling on a mountaintop, residing in a cave that tradition tells us is the same cave that the three Magi spent the night in following their paying homage to Jesus.

Theodosius built a large monastery at Cathismus, near Bethlehem.   Before long, it was filled with monks from Greece, Armenia, Arabia, Persia and the Slavic countries. Eventually, it grew into a “little city.”   One building was for sick people, one for the elderly and one for the poor and homeless.

Theodosius was always generous.   He fed an endless stream of poor people. Sometimes it seemed like there would not be enough food for the monks.   But Theodosius had great trust in God.   He never turned travelers away, even when food was scarce. The monastery was a very peaceful place.   The monks lived in silence and prayer.   It was going so well that the patriarch of Jerusalem appointed Theodosius head of all the monks in the east.

Theodosius died in 529 at the age of 106.   The patriarch of Jerusalem and many people attended his funeral.   Theodosius was buried where he had first lived as a monk. 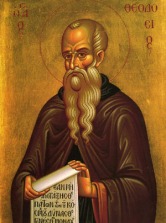