Traditionally, Ambrose is credited with promoting “antiphonal chant”, a style of chanting in which one side of the choir responds alternately to the other, as well as with composing Veni redemptor gentium, an Advent hymn.   Ambrose is one of the four original Doctors of the Church and is the Patron saint of Milan.   He is notable for his influence on St Augustine, whom he Baptised.

This politician-turned churchman was profoundly aware of his lack of preparation for this great responsibility as Bishop and so set himself immediately to prayer and the study of Scripture.    His deep spirituality and love of God’s Word married together with the oratorical skill acquired in law and politics made St Ambrose one of the greatest preachers of the early church.

His feast day in the Roman calendar is 7 December, the day he was Ordained Bishop. From the Roman liturgy for the Feast of St. Ambrose:   “Lord, you made Saint Ambrose an outstanding teacher of the Catholic faith and gave him the courage of an apostle.   Raise up in your Church more leaders after your own heart, to guide us with courage and wisdom.   We ask this through our Lord Jesus Christ, Your Son, who lives and reigns with you and the Holy Spirit, one God forever and ever. Amen.”

Early mosaic of Ambrose that might be an actual portrait.

2) What makes is his life story so strange?

Originally, he was a government official, he became bishop in a most extraordinary way.
After the death of the local bishop, the Catholics and Arians got into a vehement conflict about who should be the new bishop.
Ambrose was trying to keep the peace and settle the two groups down when someone—allegedly a small boy—began chanting “Ambrose, bishop!”
Soon the two groups began chanting together that Ambrose should be the new bishop.
(The Arians, apparently, felt that although Ambrose was Catholic in belief he would be a kinder bishop than they otherwise would likely get.)
This set of circumstances is extraordinary enough, but what’s even more extraordinary is that Ambrose wasn’t even a Christian yet. He was an unbaptised catechumen!

3) Can it get any stranger?

Ambrose did not want to be bishop and so he went into hiding.
The Emperor Valentinian then got word of all this and declared severe penalties on anyone who would give Ambrose shelter.
He was thus forced to come out of hiding and accept his ordination as bishop.
They quickly ran him through the preliminary grades of orders and he was consecrated a bishop about a week later.

He was great!   That’s part of why he ended up as a doctor of the Church.
He left many wonderful writings.   He helped convert St Augustine.   And he combated heresy.
He also introduced a practice into the West that has remained with us to this day.

5) What practice was that?

Lectio Divina. Pope Benedict XVI explained:
Culturally well-educated but at the same time ignorant of the Scriptures, the new Bishop briskly began to study them.
From the works of Origen, the indisputable master of the “Alexandrian School”, he learned to know and to comment on the Bible.
Thus, Ambrose transferred to the Latin environment the meditation on the Scriptures which Origen had begun, introducing in the West the practice of lectio divina.
The method of lectio served to guide all of Ambrose’s preaching and writings, which stemmed precisely from prayerful listening to the Word of God.

6) How did Ambrose help with Augustine’s conversion?

That also involved a rather dramatic story, in which Ambrose stood up to the emperor at the risk of his own life.
Pope Benedict explained:
A passage from St Augustine’s Confessions is relevant.
He had come to Milan as a teacher of rhetoric;   he was a sceptic and not Christian.  He was seeking the Christian truth but was not capable of truly finding it.
What moved the heart of the young African rhetorician, sceptic and downhearted and what impelled him to definitive conversion was not above all Ambrose’s splendid homilies (although he deeply appreciated them).
It was rather the testimony of the Bishop and his Milanese Church that prayed and sang as one intact body.
It was a Church that could resist the tyrannical ploys of the Emperor and his mother, who in early 386 again demanded a church building for the Arians’ celebrations.
In the building that was to be requisitioned, Augustine relates, “the devout people watched, ready to die with their Bishop”.
This testimony of the Confessions is precious because it points out that something was moving in Augustine, who continues: “We too, although spiritually tepid, shared in the excitement of the whole people” (Confessions 9, 7).

7) Was Ambrose remarkable in other ways?

He was remarkable in many ways, one of them we today would find quite surprising.
Pope Benedict explained:
[Augustine] writes in his text that whenever he went to see the Bishop of Milan, he would regularly find him taken up with catervae [Latin, “crowd”]of people full of problems for whose needs he did his utmost.
There was always a long queue waiting to talk to Ambrose, seeking in him consolation and hope.
When Ambrose was not with them, with the people (and this happened for the space of the briefest of moments), he was either restoring his body with the necessary food or nourishing his spirit with reading.
Here Augustine marvels because Ambrose read the Scriptures with his mouth shut, only with his eyes (cf. Confessions, 6, 3).
Indeed, in the early Christian centuries reading was conceived of strictly for proclamation and reading aloud also facilitated the reader’s understanding.
That Ambrose could scan the pages with his eyes alone suggested to the admiring Augustine a rare ability for reading and familiarity with the Scriptures.

Ambrose was known for the ability to read with his mouth shut, not using his voice or moving his lips.
We’re all taught to do this today, but it was rare in the ancient world! Back then, if you even could read, you usually had to at least move your lips.
Ambrose also passed on to Augustine a very famous piece of advice, that many people quote today without even knowing where it comes from.

8) What advice was that?

Augustine noted that the liturgical customs in Rome were different than those used in other places and Ambrose told him something we still quote today.

We paraphrase it in English, but it’s the same thought: “When in Rome, do as the Romans do.” 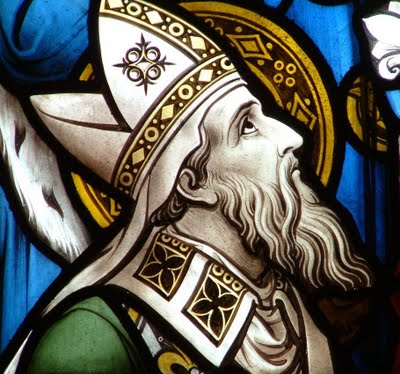