There have been a number of translations into English of the works of St John of the Cross.   One of the translations which has been considered one of the best is that by the Anglo-South African convert poet Roy Campbell (2 October 1901 – 22 April 1957).

In October 2009, Roger Scruton wrote about Roy Campbell in his article “A Dark Horse” published in The American Spectator. He was hated by the English “left establishment” especially because of his position on The Spanish Civil War.

The Wikipedia entry says of Roy Campbell that he “was considered by T. S. Eliot, Edith Sitwell and Dylan Thomas to have been one of the best poets of the period between the First and Second World wars but he is seldom found in anthologies today.”

For more about Campbell`s work, R J Dent has published an essay on Roy Campbell and his work entitled: Violence and exquisite beauty – the aesthetics of Roy Campbell.

Here is a poem of St John of the Cross with the translations by the late Roy Campbell.

Its deathless spring is hidden. Even so
Full well I guess from whence its source flow
Though it be night.

Its origin (since it has none) none knows:
But that all origin from it arose
Although by night.

I know there is no other thing so fair
And earth and heaven drink refreshment there
Although by night.

Its clarity unclouded still shall be:
Out of it comes the light by which we see
Though it be night.

Flush with its banks the stream so proudly swells;
I know it waters nations, heavens, and hells
Though it be night.

The current that is nourished by this source
I know to be omnipotent in force
Although by night.

After the beatification of St John of the Cross on 25 January 1675, the Carmelite convent of Nuestra Señora de los Remedios near Seville commissioned this life-sized statue from the young Sevillian sculptor, Francisco Antonio Gijón, then only 21.
The figure of the saint holds a quill pen in his right hand and, in the left, a book with a model of a mountain surmounted by a cross, which refers to his mystic commentary, “The Ascent of Mount Carmel.” 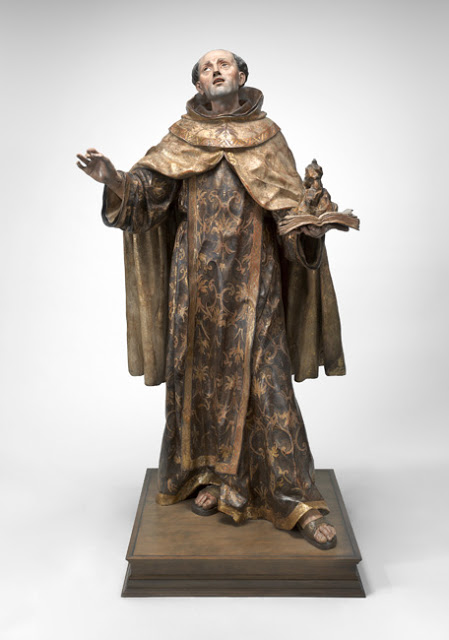