The Holy Family is the name given to the family unit of Jesus:  The Divine Son of God Jesus, His mother the Virgin Mary and His foster-father Joseph.   We know very little about the life of the Holy Family through the canonical Gospels.   They speak of the early years of the Holy Family, including the birth of Jesus in Bethlehem, the flight into Egypt, and the finding of Jesus in the temple.   Various non-canonical works, including the Infancy Gospel of Thomas, try to fill in the blanks.   However, even though these apocryphal works may contain some truth derived from oral tradition, they have been deemed unworthy of canonical status because of the way they present Jesus.   While the exact details of the day-to-day life of the Holy Family may be unknown, we can still learn a lot from the stories we do have.

As far back as St John Chrysostom (347-407) , Christians were urged to make of their home a family church in which the family members would find their sanctification.   That was to be accomplished by putting Christ at the center of all individual and family life, by working and praying together, reading the Scriptures and worshiping as a unit. The cult of the Holy Family grew in popularity in the 17th century and several religious congregations have been founded under this title.   The Holy Family also became portrayed in popular art of the period.   On 26 October 1921 the Congregation of Rites (under Pope Benedict XV) inserted the Feast of the Holy Family into the Latin Rite general calendar.   Until then it had been celebrated regionally.   Popes before and including Benedict XV (especially Leo XIII) promoted the feast as a way to counter the breakdown of the family unit.   Today the Church celebrates the Feast on the Sunday between Christmas and New Year’s Day (Known as the Feast of Mary Mother of God in the Catholic Church).   If both Christmas and New Year’s Day fall on Sundays, no Sunday exists between the two dates, so the Church celebrates the Holy Family Feast on 30 December.

The Holy Family:   Jesus, Mary and Joseph
The devotion to the Holy Family was born in Bethlehem, together with the Baby Jesus. The shepherds went to adore the Child and, at the same time, they gave honour to His family.   Later, in a similar way, the three wise men came from the East to adore and give honour to the newborn King with gifts of gold, frankincense and myrrh that would be safeguarded by His family.

We can go further to affirm that in a certain sense Christ, Himself, was the first devotee of His family.   He showed His devotion to His mother and foster father by submitting Himself, with infinite humility, to the duty of filial obedience towards them.   This is what St Bernard of Clairvaux said in this regard, ‘God, to whom angels submit themselves and who principalities and powers obey, was subject to Mary;  and not only to Mary but Joseph also for Mary’s sake [….]. God obeyed a human creature;  this is humility without precedent.   A human creature commands God;  it is sublime beyond measure.’ (First Homily on the ‘Missus Est’). 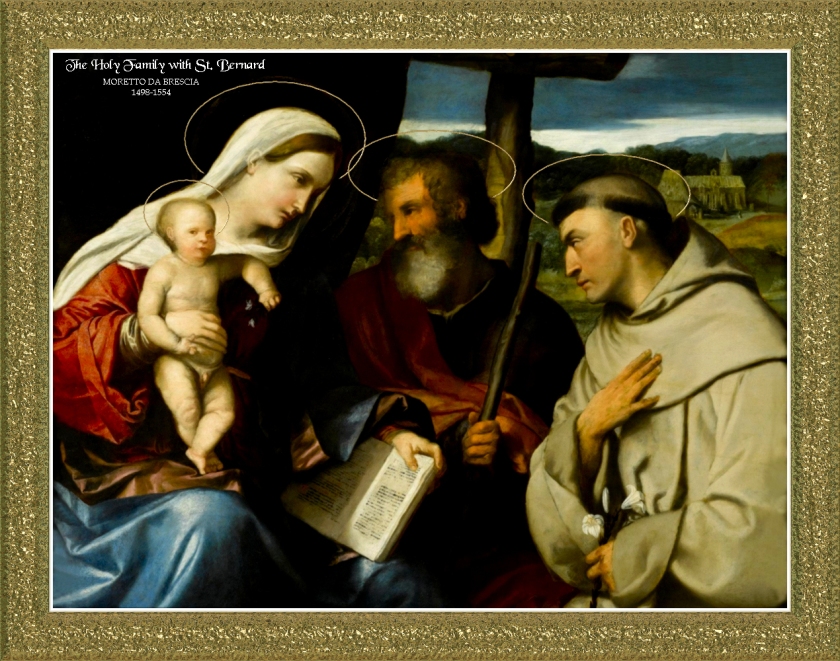 Today’s celebration demonstrates Christ’s humility and obedience with respect to the fourth commandment, whilst also highlighting the loving care that His parents exercised in His keeping.   The servant of God, St Pope John Paul II, in 1989, entitled his Apostolic Exhortation, ‘Redemptoris Custos’ (Guardian of the Redeemer) which was dedicated to the person and the mission of Saint Joseph in the life of Christ and of the Church.   After exactly a century, he resumed the teaching of Pope Leo XIII, for who Saint Joseph ‘.. shines among all mankind by the most august dignity, since by divine will, he was the guardian of the Son of God and reputed as His father among men’ (Encyclical Quamquam Pluries[1889] n. 3).   Pope Leo XIII continued, ‘.. Joseph became the guardian, the administrator and the legal defender of the divine house whose chief he was.[…]   It is, then, natural and worthy that as the Blessed Joseph ministered to all the needs of the family at Nazareth and girt it about with his protection, he should now cover with the cloak of his heavenly patronage and defend the Church of Jesus Christ.’   Not many years before, blessed Pope Pius IX had proclaimed Saint Joseph, ‘Patron of the Catholic Church’ (1870)

Almost intuitively, one can recognise that the mysterious, exemplary, guardianship enacted by Joseph was conducted firstly, in a yet more intimate way, by Mary. Consequently, the liturgical feast of the Holy Family speaks to us of the fond and loving care that we must render to the Body of Christ.   We can understand this in a mystical sense, as guardians of the Church and also in the Eucharistic sense.   Mary and Joseph took great care of Jesus’ physical body.   Following their example, we can and must take great care of His Mystical Body, the Church and the Eucharist which He has entrusted to us.   If Mary was, in some way, ‘the first tabernacle in history’ (St John Paul  Ecclesia de Eucharistia, n. 55) then we, the Tabernacle, in which Our Lord chose to reside in person, in His Real Presence, was also entrusted to us.

We can learn from Mary and Joseph!   What would they ever have overlooked in the care of Jesus’ physical body? Is there something, therefore, that we can withhold for the right and adoring care of His Eucharistic Body?   No amount of attention, no sane act of love and adoring respect will ever be too much!   On the contrary, our adoration and respect will always be inferior to the great gift that comes to us in the Holy Eucharist.

Looking at the Holy Family, we see the love, the protection and the diligent care that they gave to the Redeemer.   We can not fail to feel uneasiness, perhaps a shameful thought, for the times in which we have not rendered the appropriate care and attention to the Blessed Eucharist.   We can only ask for forgiveness and do penance for all the sacrilegious acts and the lack of respect that are committed in front of the Blessed Eucharist.   We can only ask the Lord, through the intersession of the Holy Family of Nazareth, for a greater love for their Son Incarnate, who has decided to remain here on earth with us every day until the end of time.   (From the Congregation for the Clergy.)