St John Nepomucene Neumann (1811–1860), Bishop of Philadelphia from 1852–1860, was graced with an intense devotion to Our Lord in the Sacrament of the Most Holy Eucharist.   His personal experience as a boy in Bohemia (modern Czech Republic), then as a priest in the United States and finally as a Redemptorist — a spiritual son of the incomparable Saint Alphonsus Liguori (1696-1787) (Founder of the Redemptorists and Doctor of the Church) — impelled him to promote prolonged prayer before the Blessed Sacrament exposed in the monstrance.   No sooner had he become bishop of Philadelphia than he sought to introduce the Quarant’ Ore, or Forty Hours Devotion, already practised for three hundred years in Europe.

The good priests of Philadelphia were, for the most part, opposed to the introduction of the Forty Hours Devotion, fearing that, given the prevailing climate of violent anti-Catholicism nurtured by the Know Nothing Movement, it might exacerbate hostilities against the Church and even expose the Most Holy Sacrament to profanation.

Bishop Neumann had very nearly renounced his project when, overcome by exhaustion late one night, he fell asleep while writing at his desk.   A burning candle ignited the papers lying before him.   He awoke to smoke rising from the incinerated papers.   One document alone remained unscathed;  it was the letter he had written to propose the Forty Hours Devotion.   Bishop Neumann fell to his knees to give thanks for having been preserved from harm and, as he did so, he experienced a kind of locution.   God spoke to him inwardly saying,  “As the flames are burning here without consuming or injuring this writing, so shall I pour out My grace in the Blessed Sacrament without prejudice to My honour.   Therefore, do not fear profanation and do not hesitate any longer to carry out your designs for My glory.”

Convinced by this sign, Bishop Neumann overrode the objections of his clergy and initiated the celebration of the Forty Hours at the First Diocesan Synod of Philadelphia in April 1853.   The Church chosen for the first Forty Hours was that of Saint Philip Neri.   It was the latter saint who had, in fact, introduced the Quarant’ Ore to the city of Rome. Bishop Neumann astonished — and edified — his clergy and faithful by spending the greater part of the three days on his knees before the Blessed Sacrament in Saint Philip Neri Church.   There was no anti-Catholic backlash.   Great crowds of the faithful came, by day and by night, to adore Our Lord exposed to their gaze in the Sacrament of the Altar.

Bishop Neumann carried out his original inspiration by organising the Forty Hours Devotion in the entire diocese of Philadelphia in such a way that each parish would celebrate it in turn during the course of the year.   He edited a booklet to facilitate the worthy celebration of the Quarant’ Ore and secured indulgences for the faithful who would participate in the devotion.   So successful was the Forty Hours in the diocese of Philadelphia that it spread from there to other dioceses of the United States.   In 1866 at the Plenary Council of Baltimore the Forty Hours Devotion was ratified for the whole country.

One of the conclusions of the 2005 Vatican Synod on the Eucharist was the recommendation that the Forty Hours Devotion be reinvigorated and reintroduced everywhere in the Church.   This, of course, is fully consonant with the repeated exhortations to Eucharistic adoration of St Pope John Paul II and Pope Benedict XVI.

Saints John and Alphonsus
Saint John Neumann left, among his personal writings, a prayer that, by its language and tenderness, is reminiscent of the outpourings of his spiritual father, Saint Alphonse Liguori, in the presence of the Blessed Sacrament. It reveals something of the soul of Bishop Neumann:

ST JOHN NEUMANN, PRAY FOR THE GROWTH OF EUCHARISTIC ADORATION, PRAY FOR HOLY MOTHER CHURCH, PRAY FOR US ALL!

“Everyone who breathes, high and low,
educated and ignorant, young and old,
man and woman, has a mission, has a work.
We are not sent into this world for nothing;
we are not born at random;
we are not here, that we may go to bed at night
and get up in the morning, toil for our bread,
eat and drink, laugh and joke,
sin when we have a mind
and reform when we are tired of sinning,
rear a family and die.
God sees every one of us,
He creates every soul . . .
FOR A PURPOSE.
He needs, He deigns to need, every one of us.
He has an end for each of us.
We are all equal in His sight and we are placed
in our different ranks and stations,
not to get what we can out of them for ourselves
but to labour in them for Him.
As Christ has His work, we too have ours –
as He rejoiced to do His work,
we must rejoice in ours also.”

And now these three remain:  faith, hope and love.   But the greatest of these is love….1 Corinthians 13:13

REFLECTION – “But to accomplish his task, love was necessary.   And love meant giving; love meant effort;  love meant sacrifice.   And in his sacrifice, Bishop Neumann’s service was complete.   He led his people along the paths of holiness.   He was indeed an effective witness, in his generation, to God’s love for His Church and the world.”…Blessed Pope Paul VI at the Canonisation of St John Neumann 19 June 1977

PRAYER – Holy Father, You brought St John Neumann to the new world to show Your ways and lead all to You.   By Your grace, may we all learn to live such zealous and loving lives!   Grant Lord that St John Neumann, by the living power of his example and by the intercession of his prayers, may assist us and intercede to help us, today and forever.  We make our prayer through our Lord Jesus Christ, in union with the Holy Spirit, one God forever, amen. 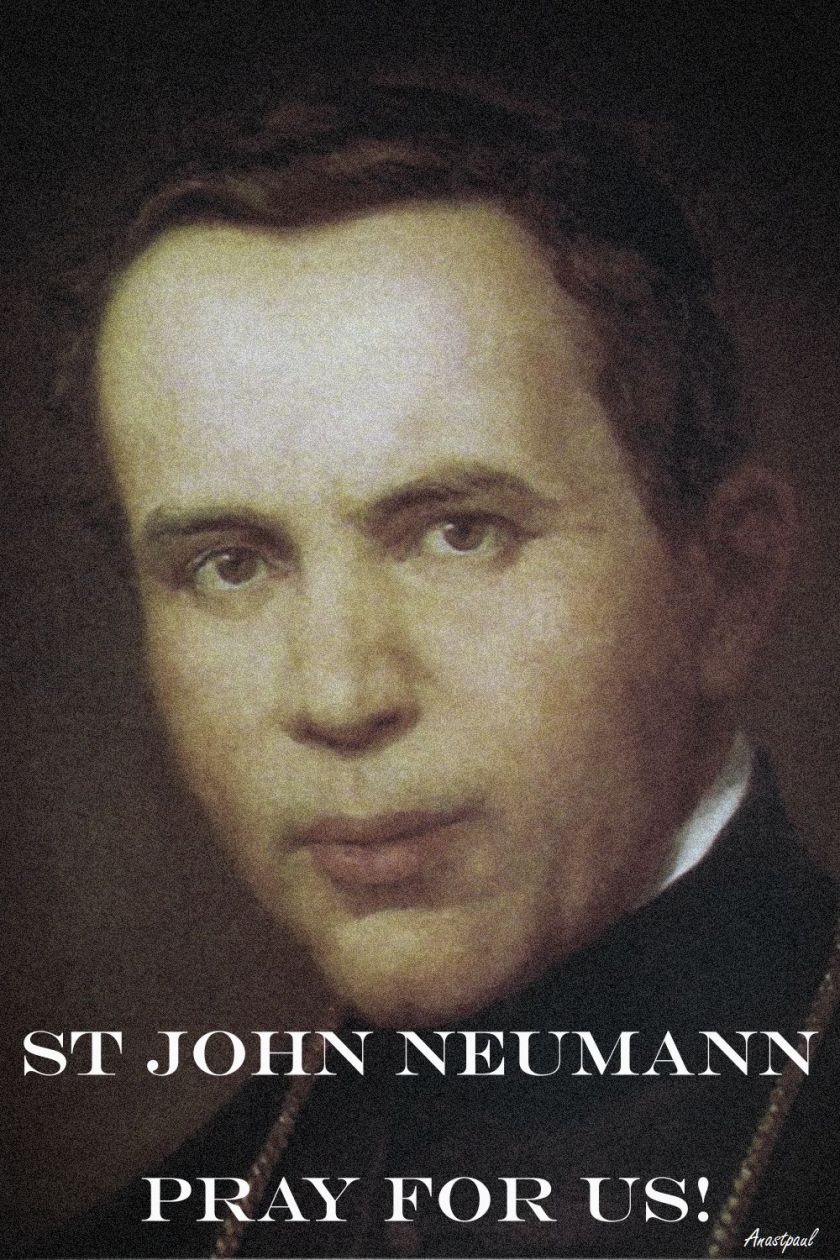 My God,
how great Thou art,
how wonderful in all Thy works!
Teach me Thy will,
that I may begin and end
all my actions for Thy greater glory.
Speak to me, 0 my God,
let me know Thy will,
for behold,
I am ready to fulfill
Thy every command.
The difficult, the irksome,
I will patiently endure for love of Thee.
Amen

Saint of the Day – 5 January – St John Nepomucene Neumann CSsR (1811-1860) Bishop, Religious, Founder, Preacher, Writer, Founder of Schools and builder of Churches.  St John was born on 28 March 1811 at Prachititz, Bohemia (Czech Republic) – 5 January 1860 of a stroke at 13th and Vine Streets, Bishop of Philadephia, Pennsylvania, USA.   His body is incorrupt.   St John Neumann is the first United States bishop (and to date the only male citizen) to be canonised.   While Bishop of Philadelphia, Neumann founded the first Catholic diocesan school system in the United States as well as building 50 Churches as well as starting on a Cathedral, before his death.   https://www.youtube.com/watch?v=V9OcOcnZ0CI

John was the third of six children to a German Father and Czech mother.   He showed great talent in school and by the time he was 24, he had mastered six languages.   It was his desire to become a priest, so in 1831, he entered the diocesan seminary in Budweis, and continued his studies at the Charles Ferdinand University in Prague.

He was looking forward to being ordained in 1835 when the bishop decided there would be no more ordinations as there were more than enough priests in Bohemia.   John wrote to bishops all over Europe but the story was denied on each request.   Nevertheless, John was not discouraged from his vocation and continued to search for a diocese that would take him.   He had learned English by working in a factory with English-speaking workers so he wrote to the bishops in America.   Finally, he emigrated to the United States, where the bishop of New York ordained him in 1836.

He spent 4 years ministering to German immigrants and Native Americans in the Buffalo-Rochester area.   He was one of 36 priests that were attending to more than 200,000 Catholics and his parish in western New York was vast, stretching from Lake Ontario to Pennsylvania.   His church was very meagre, not even having a floor and he spent much of his time travelling from town to town through rugged wilderness to visit his flock.   His work was very solitary and he felt drawn to a community.   He was accepted into the Redemptorist Congregation in 1840 and began his novitiate in Pittsburgh.   Two years later, he took his vows.   By this time, he spoke eight languages. His religious superiors in Europe were impressed with his holiness and hard work, so the appointed him vicar of all the Redemptorists in America.   He was devoted to the education of African-American children and became an American citizen. 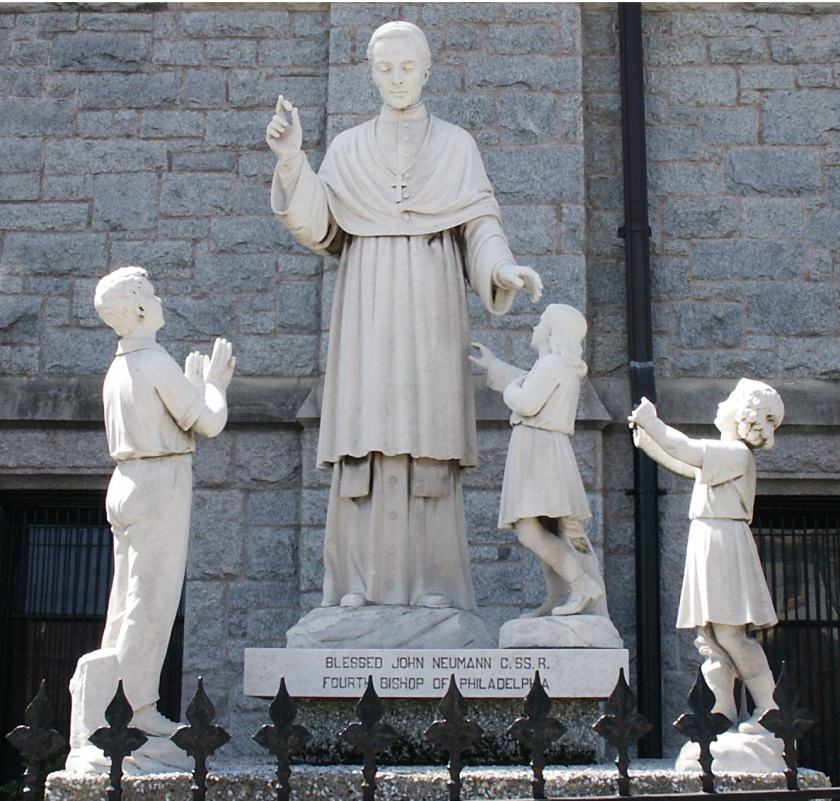 John was surprised by his appointment as bishop of Philadelphia in 1852.   His new responsibilities were heavy, as the diocese of Philadelphia was geographically very large and there were many languages spoken among the immigrants under his care.   One of his major accomplishments was to organise the first diocesan Catholic school system.   He worked tirelessly, founding a Congregation of religious sisters to teach in the diocesan schools and during his tenure as bishop, the population of his diocese doubled. He increased the number of Catholic schools in his diocese from two to over 200.

Neumann lived very simply and frugally.   On one visit to Germany, he came back to the house he was staying in soaked by rain.   His hosts suggested he change his shoes but John replied, “The only way I could change my shoes is by putting the left one on the right foot and the right one on the left foot. This is the only pair I own.”   When he was given a new set of vestments as a gift, he would frequently give them to the most recently ordained priest in the diocese.

He was also a humble man, once being picked up by a parish priest from a rural area and riding to town on the back of a manure cart.   John jokingly exclaimed, “Have you ever seen such an entourage for a bishop!”   He was disheartened by constant conflict with religiously and racially prejudiced people in his diocese.   There was a strong anti-Catholic movement which had a strong presence in the area and there were even anti-Catholic riots and arson of religious buildings.   Neumann wrote to Rome asking to be replaced as bishop but Pope Pius IX insisted that he continue.   In 1854, he travelled to Rome and was present at St. Peter’s Basilica on December 8, along with 53 cardinals, 139 other bishops and thousands of priests and laypersons, when Pope Pius IX solemnly defined, the dogma of the Immaculate Conception of the Blessed Virgin Mary. 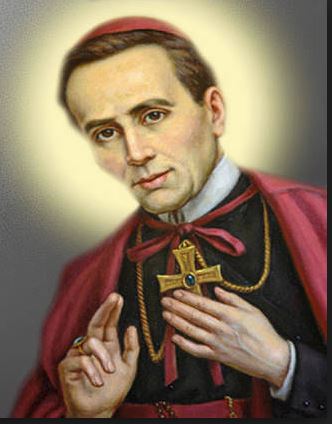 His strenuous work load caught up with him and at the age of 48, he collapsed on the street and died on 5 January 1860.   He was declared venerable by Pope Benedict XV in 1921 and beatified by Pope Paul VI during the Second Vatican Council on 13 October 1963.   Pope Paul VI also canonised him on 19 June 1977.   His incorrupt body currently lays in a glass sarcophagus for public veneration in Saint Peter’s Church in Philadelphia.

Martyrs of Sais: A group of Christians martyred for their faith, but about whom no details have survived. They were martyred by drowning near Sais, Egypt.

Martyrs of Upper Egypt: There were many martyrs who suffered in the persecutions of Diocletian in the Thebaid region. Though we know these atrocities occurred, to the point that witnesses claim the torturers and executioners were exhausted by the work, we do not know the names of the saints and we honour them as a group. Many were beheaded and or burned alive in 303 in Upper Egypt.