Saint of the Day – 23 January – St Ildephonsus (607-667) Monk, Priest, Theologian, Scholar, Marian devotee, Writer, Evangeliser, Archbishop of Toledo.   Abbot Dom Guéranger calls him the Doctor of the Virginity of Mary.   Saint Ildephonsus established the feast of the Expectation of the Blessed Virgin Mary, which is still kept in some places on 18 December.   Patronages – Toledo, Zamora and several smaller towns in Spain and Portugal.

Ildephonsus was born to a prominent family in Toledo.   His uncle Eugenius, who later became Toledo’s bishop, began educating the devout youth.   Ildephonsus began his religious career circa 632 when Bishop Eladius of Toledo ordained him as a deacon. However, Ildefonse defied his family’s plans for his clerical career by becoming a monk at the Agali monastery outside the city.   While he was still a simple monk, he founded and endowed a monastery of nuns.   In 650 Ildephonsus was elected its abbot of Agali.    When his uncle Bishop Eugenius II died in 657, Ildefonsus was elected his successor as bishop of Toledo.   King Recceswinth compelled him to accept the position, as Ildephonsus later complained to his protege and successor, Bishop Quiricus of Barcelona, who wrote St Ildephonsus biography after his death.   His later successor, Julian, included Ildefonsus among the biographies added in his own continuation to the De viris illustribus.   Another successor, Cixila, wrote a hagiographical life of Ildefonsus.   During the 13th century, the Dominican Rodrigo de Cerrato included Ildefonsus among his vignettes of illustrious men.

Spanish Catholics esteem St Ildefonsus as one of their greatest saints, second only to St Isidore of Seville (560-636), who is a Doctor of the Church.   As archbishop of Toledo, he led the Spanish church from 658 to 667.   Like Isidore, Ildefonsus contributed to the creation of the collaborative union of church and state that came to typify medieval Europe.   For example, he presided over a council in 653 that granted secular leaders the right to participate in ecclesiastical decisions.   But at the same time, bishops participated in the election of kings and joined with state officials in publishing secular laws and pardoning traitors.   Thus the saint helped forge medieval political relationships well ahead of their time. 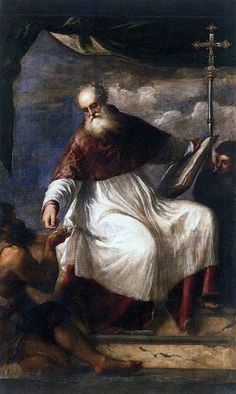 Pastorally, Ildefonsus aimed to raise the faith level of the laypeople in Toledo, so he set about to educate them in Christian truth.   For example, he wrote On Understanding Baptism to elevate their ideals.   Here is a quote from that popular book:

We come to the font as to the Red Sea.   Moses was the leader in saving Israel; Christ was the leader in redeeming man.   The former left Egypt;  the latter left the world.   The Egyptians pursued the Israelites;  sin pursued man.   The sea is coloured by the red of its shore;  baptism is consecrated with the blood of Christ. The vast sea is divided by a rod;  the entrance to the font is opened with the sign of the cross.   Israel enters the sea;  man is washed in the font.   Israel passes on a dry path between the waters without hindrance;  through the waters man journeys the way of salvation.   The pursuing Egyptians are drowned with Pharaoh;  sins are destroyed in baptism together with the devil in a destruction not of life but of power.   The children of Israel left Egypt in the spring of the year and passed through the sea;  in the same season we celebrate the Pasch of our Lord Jesus Christ.   In baptism, souls cross from vices to virtues.   They pass from the lusts of the flesh to grace and sobriety of spirit.   And they escape from the leaven of malice and wickedness to truth and sincerity.   Thus we say to those born again: “This month shall be to you the beginning of months:  it shall be the first of the months of the year” (see Exodus 12:2).   For he who is washed abandons Pharaoh, the leader of this world, with all its works.

Veneration of the Virgin Mary runs deep in the Hispanic Catholic tradition.   That stream of Marian devotion can trace its roots in part to Ildefonsus.   He loved Mary and honoured her in his landmark book, On the Perpetual Virginity of Holy Mary.   Its themes inspired the Marian “breastplate” songs of Irish monks in Europe and through many centuries copyists placed quotes from it in books of hours.   Ildefonsus’s work influenced the long-standing practice of celebrating Mass on Saturdays in honour of Mary.

It is recounted that on this feast of the Mother of God, Archbishop Ildephonsus, together with some of his clergy, hastened to church before the hour of Matins to honour Our Blessed Lady with their songs.   Arriving close to the church, they found it all ablaze with a heavenly radiance.   This so frightened the little band that all fled, except for Archbishop Ildephonsus and his two faithful deacons.   Deacons, take note!   With wildly beating hearts, these entered the church and made their way to the altar.   A great mystery was about to unfold.

A Chasuble from the Treasury of Heaven

There, seated on the Archbishop’s throne, was the august Queen of Heaven surrounded by choirs of angels and holy virgins.   The chants of paradise filled the air.   Our Blessed Lady beckoned Ildephonsus to approach her.   Looking upon him with tenderness and majesty, she said:  “Thou art my chaplain and faithful notary. Receive from me this chasuble, which my Son sends you from His treasury.”   Having said this, the Immaculate Virgin clothed Ildephonsus in the chasuble, and instructed him to wear it for the Holy Sacrifice on her festivals.

The account of this apparition, and of the miraculous chasuble, was deemed so certain and utterly beyond doubt, that news of it spread through the Church, even reaching the Ethiopians.   The Church of Toledo honoured the event with a special proper Mass and Office.   What was the miraculous chasuble like? Artists through the ages have sought to depict it, more often than not in rich brocades of gold and blue.

Sceptics may smile condescendingly and dismiss the story as a pious fabrication.  Serious studies of the various gratiae gratis datae — graces freely given — are not without evidence of the phenomenon of material gifts brought from heaven.   One finds examples of it as recently as in the life of Mother Yvonne-Aimée of Malestroit (1901-1951).   A classic example of the phenomenon would be the cincture of the Angelic Warfare with which angels girded Saint Thomas Aquinas after his victory over a temptation of the flesh.

Ildephonsus died after a decade in office and was buried at his (and the city’s) basilica, Toledo’s Church of Santa Leocadia.   Another Council of Toledo decreed that henceforth 18 December would be celebrated as a Marian feast day, to commemorate his vision.  Even during the Muslim occupation, when the basilica was converted into a mosque, the area where the vision occurred remained sacred and dedicated to the Virgin Mary.  Pilgrims travelled to Toledo to see the stone where Mary stepped during Ildephonsus’ vision.   During later wars, the saint’s remains were transferred Zamora, where they remain at the Church of Sts Peter and Ildephonso. 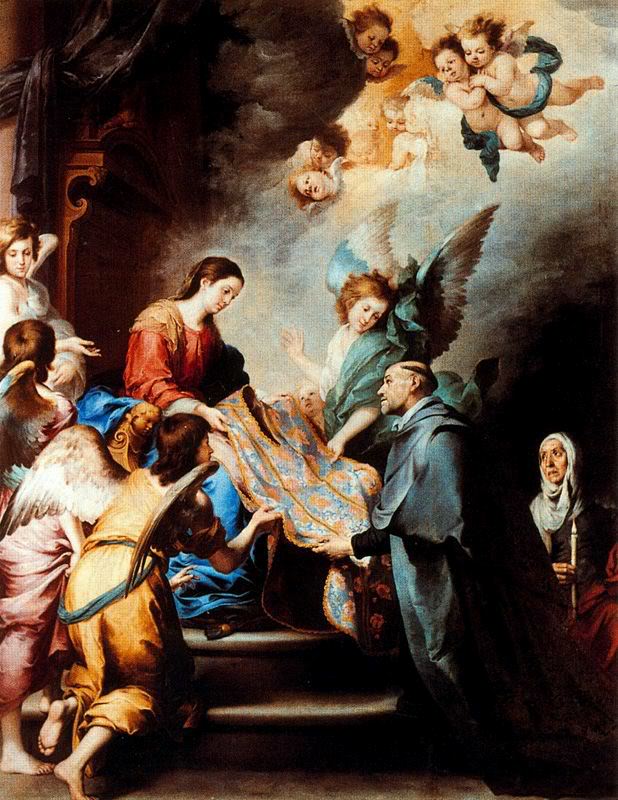