Novena to Our Lady of Lourdes – DAY NINE– 10 February (we Pray the Novena for our own intentions and for the sick, the infirm within our own communities but also for all those throughout the world who suffer, especially those who have no-one to pray for them in preparation for the Wold Day of the Sick on 11 February.)

DAY NINE
O glorious Mother of God,
to you we raise our hearts and hands
to implore your powerful intercession
in obtaining from the benign Heart of Jesus
all the graces necessary
for our spiritual and temporal welfare,
particularly for the grace of a happy death.
O Mother of our Divine Lord,
as we conclude this novena for the special favour
we seek at this time.
……………………………(make your request)
Mary and Bernadette
We feel animated with confidence that your prayers in our behalf
will be graciously heard. O Mother of My Lord,
through the love you bear to Jesus Christ
and for the glory of His Name,
hear our prayers and obtain our petitions.
O Brilliant star of purity, Mary Immaculate, Our Lady of Lourdes,
glorious in your assumption,
triumphant in your coronation,
show unto us the mercy of the Mother of God,
Virgin Mary, Queen and Mother,
be our comfort, hope, strength, and consolation. Amen. 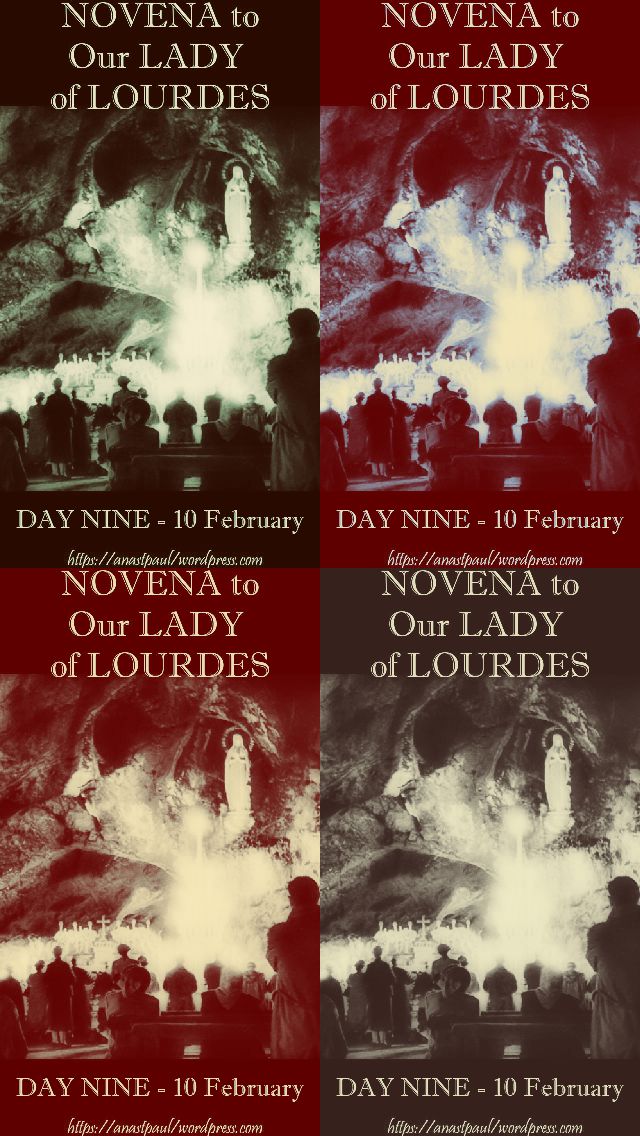 In an interview with the Register at the Vatican on Saturday, the newly proclaimed saint’s postulator, Father Fidel Gonzáles, stressed this as he spoke about St José Sánchez del Río.   Father Gonzalez stressed how young José’s faith was not for sale and no one, no “offer” — not even his parents’ intervention — would convince him to negate his faith, even if it cost him his life.

The Vatican official also addressed how there are many Christian martyr saints that exist, even if they have not been formally recognised by the Church and reflected on how important it is, in the midst of today’s world, full of ambiguities, relativism and religious persecution, to not abandon our faith, as St Josélito teaches us.

“It’s always a little surprising to hear about saints as young as only 14 years old.  But can a child, someone so young, really be a saint as much as an adult or an elderly person? Of course.   There is a theological sanctity that belongs to every baptised person, even if baptised even a few hours after birth, because it is a grace of the Holy Spirit.   Instead, the moral holiness grows like a tree, which comes and develops from a small seed and then spreads throughout the course of a lifetime.   In the specific case of St José Sánchez del Río, we are facing a martyr of nearly age 15 but he had a clear awareness of the ideas that led him to proclaim his faith with martyrdom.   I can say that he really is an exceptional figure.

…because he showed a psychological maturity much higher than that of his own age.   We could say that, psychologically, he had the maturity of someone at least 18 or 20 years old, especially as he demonstrated his firm decision to reject the many proposals that they made to free him from prison in exchange for the apostasy of his faith in Christ. But he replied with a phrase, instead, of accepting, one that the witnesses then reported, a phrase that he used speaking to his parents when they tried to free him from captivity: “My faith is not for sale,” which means: “My faith in Christ cannot be sold, even though I know that this involves torture and death.”
“Long live Christ the King” was the cry with which the Mexican Cristeros went down in history.   What did those words mean to them?   It’s a theological expression;  maybe neither St Josélito nor the others, fully realised its meaning, its significance.   For them, it was a way of proclaiming the centrality of Christ in history.   We must point out that St José did not ever stop proclaiming Christ.   They said, “If you shout, ‘Death to Christ the King,’ we will spare your life.”   But instead he continued: “Long live Christ the King. … Long live the Lady of Guadalupe.”   This invocation of Our Lady of Guadalupe was significant, too, as it was the first concrete manifestation of God in the history of Mexico and Latin America.   José stayed faithful to the very, very end, even as they continued stabbing him and eventually shot him with the pistol.”

As a specialist on the concept of sanctity, are you familiar with other martyrs like St. José?
“I have been a consultant for 31 years of the Congregation for the Causes of Saints and I have seen hundreds of cases of martyrdom but never of a martyr so young.   It’s a unique case, where you really see the power of divine grace.   But José Sánchez del Río — this is my thesis — is not only a martyr of the Christian faith but is a martyr of the fundamental rights of the person: the right to freedom of opinion, freedom of religion, the right to practice their religion. … In short, he is a martyr of all the rights that were denied the totalitarian era.   The 20th century is the century of totalitarian regimes, each very different from the others but yet they all agree on setting aside God, getting rid of the foundation of human rights.
St Josélito simply teaches us that the Catholic faith is not for sale, as he said himself [while] dying.   This is especially true in a world like today, full of ambiguities, of relativism, of dominant cultural nihilism.   The Christian faith, instead, has a solid foundation, i.e., the principle that God is the creator of all reality and if we put it aside, then all the rights of the person lose consistency and end up at the mercy of a political power.

It’s interesting, I repeat, that all ideological totalitarianisms of the 20th century have desecrated the human person, profaning God.”

St Joselito, Pray for us! 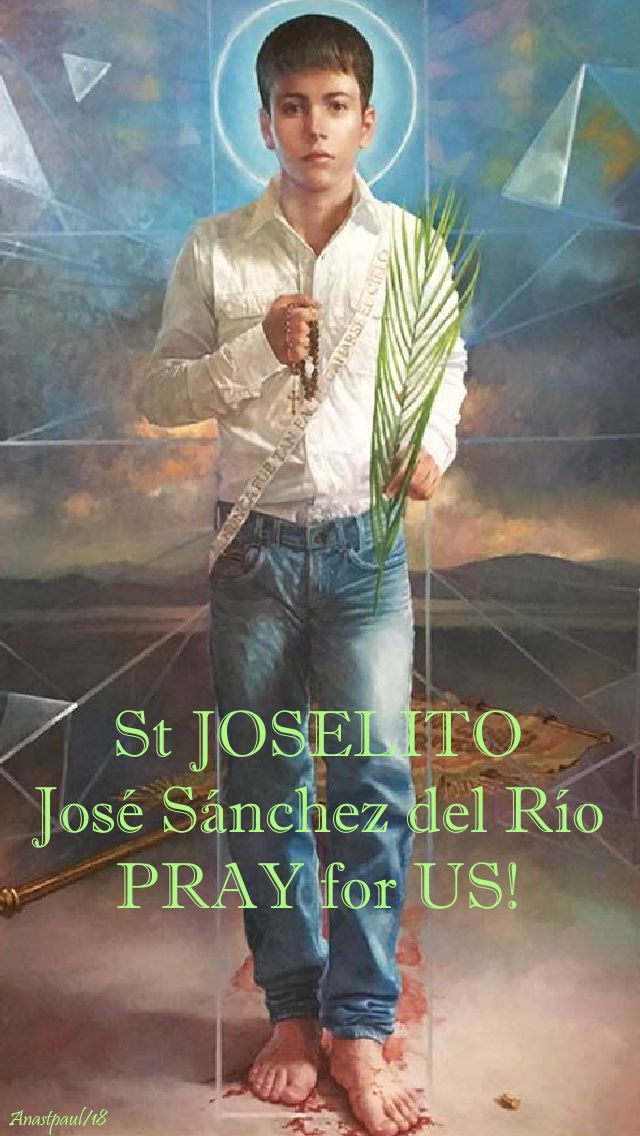 “Mama, do not let me lose the
opportunity to gain Heaven
so easily and so soon”. 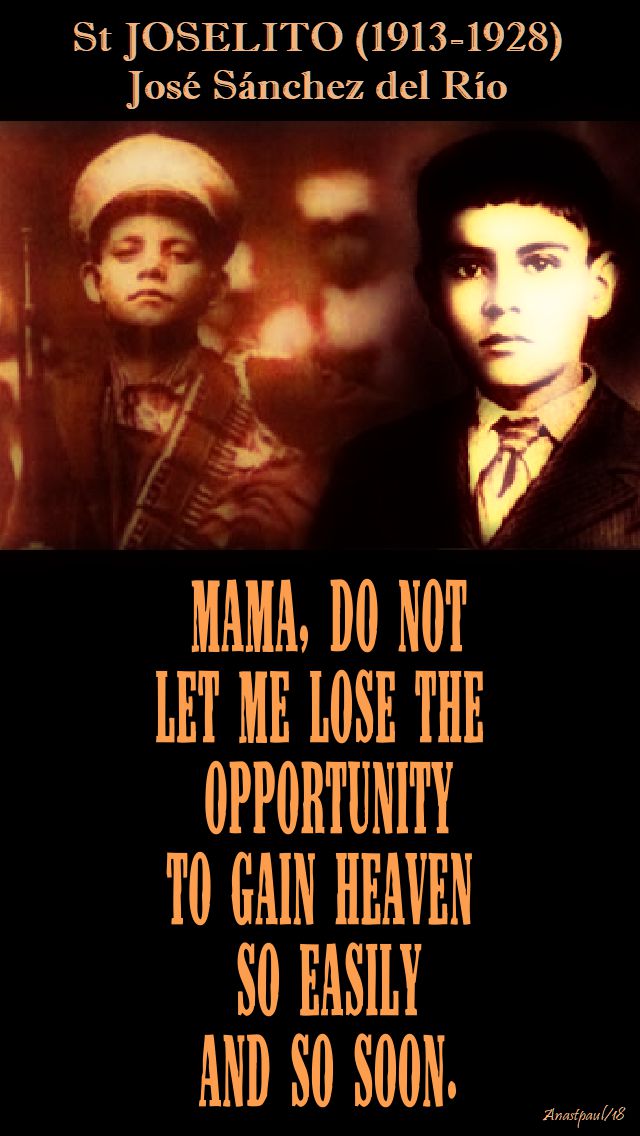 “You will be in Heaven before me.
Prepare a place for me.
Tell Christ the King I shall be with Him soon”. 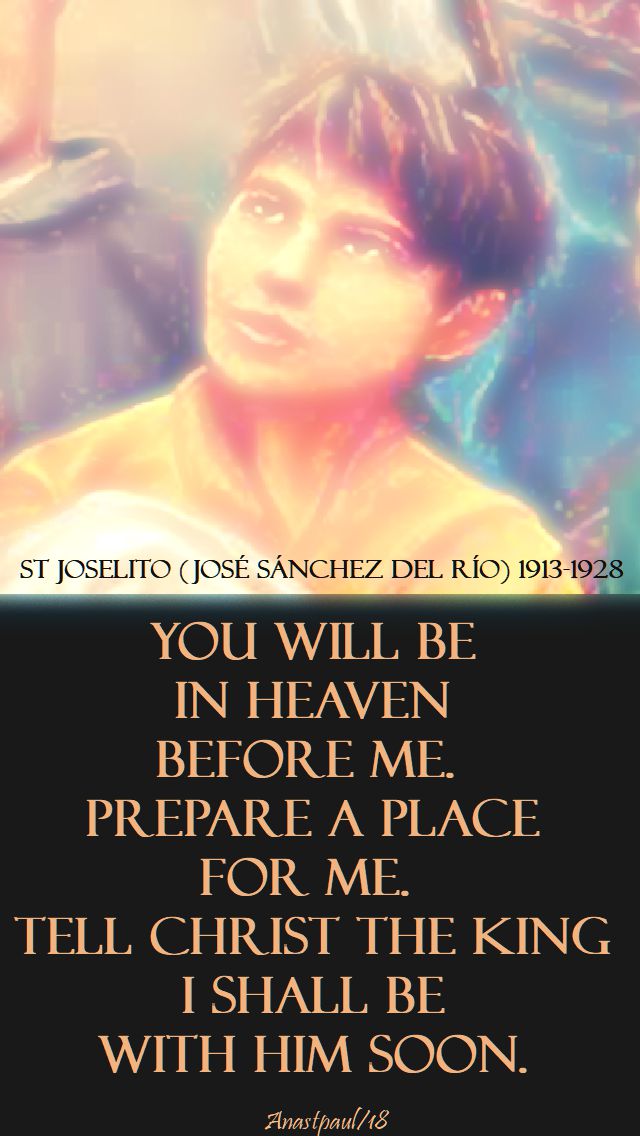 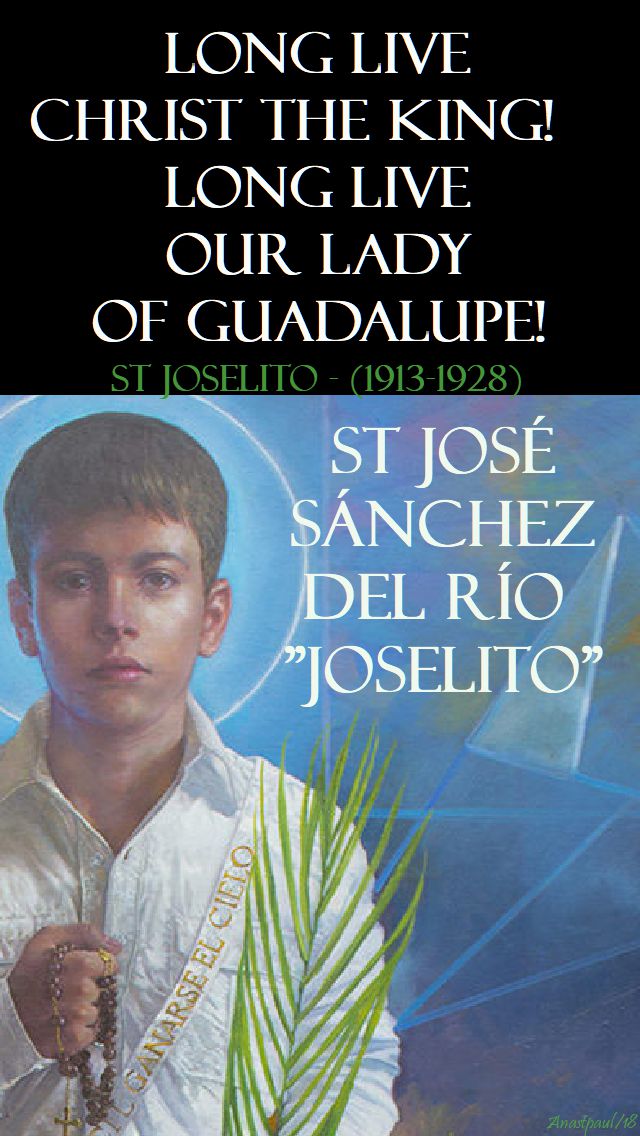 What will separate us from the love of Christ?   Will anguish, or distress, or persecution, or famine, or nakedness, or peril, or the sword?   As it is written:  “For your sake we are being slain all the day;  we are looked upon as sheep to be slaughtered.”   No, in all these things we conquer overwhelmingly through him who loved us ...Romans 8:35-37 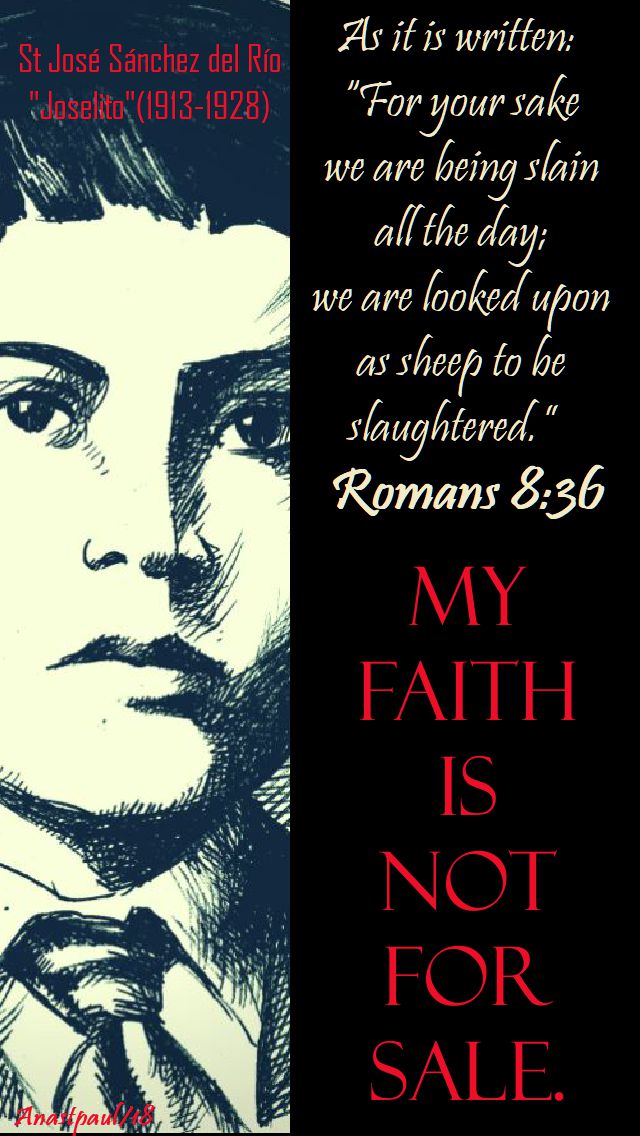 PRAYER – Lord, my God, You chose us from the foundations of the world to be Your children.   We pray that our courage may not fail us as we are attacked from all sides, as we struggle home to You.  Grant that through the prayers of young Joselito, we too may fight unto death for Your love and the glory of Your Kingdom.   Through our Lord, Jesus, in the unity of the Holy Spirit, one God forever and ever, amen. 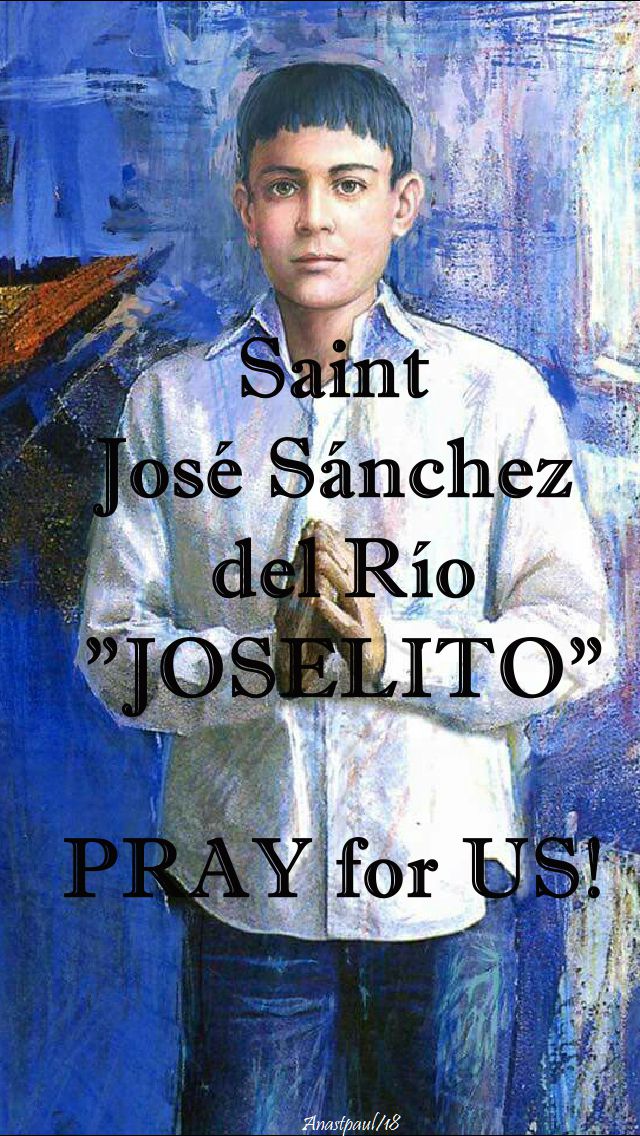 Father, in Your Goodness, Grant Me ….
St Benedict

Father, in Your goodness,
grant me
the intellect to comprehend You,
the perception to discern You,
and the reason to appreciate You.
In Your kindness
endow me with
the diligence to look for You,
the wisdom to discover You
and the spirit to apprehend You.
In Your graciousness
bestow on me
a heart to contemplate You,
ears to hear You,
eyes to see You,
and a tongue to speak of You.
In Your mercy confer on me
a conversation pleasing to You,
the patience to wait for You,
and the perseverance to long for You.
Grant me a perfect end,
Your holy presence.
Amen. 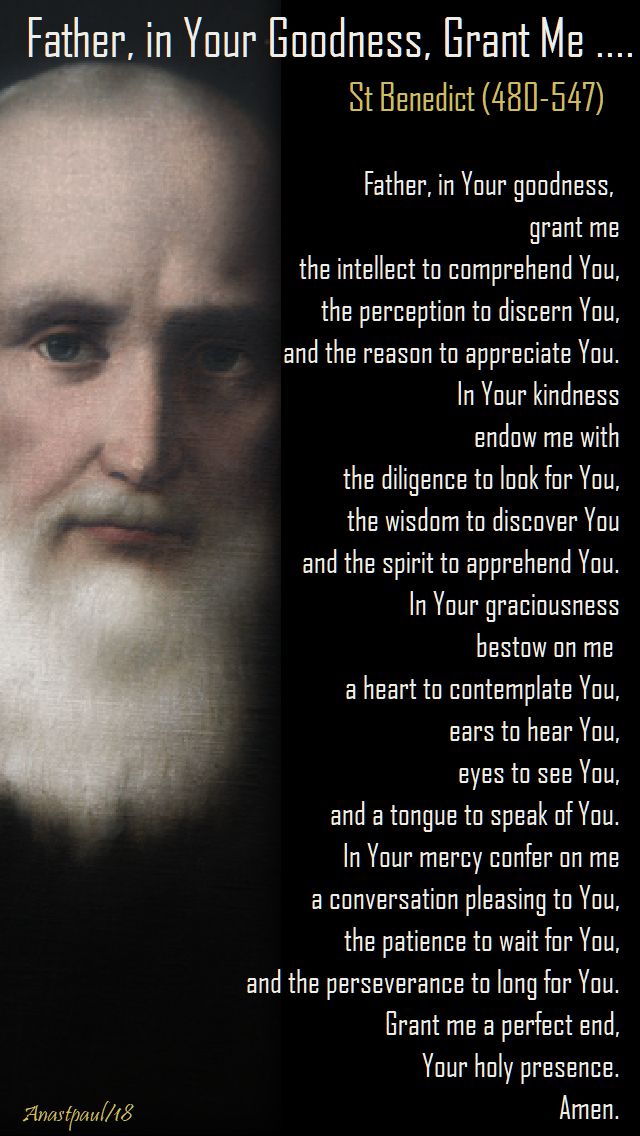 Saint of the Day – 10 February – St José Sánchez del Río “Joselito” (1913-1928) known as “Joselito” – (28 March 1913 – 10 February 1928) Boy Martyr was a Mexican Cristero who was put to death by government officials because he refused to renounce his Catholic faith. His death was seen as a largely political venture on the part of government officials in their attempt to stamp out dissent and crush religious freedom in the area.   Patronages – Persecuted Christians, Catholic Children and Adolescents, Sahuayo, Mexico, his birthplace.   He was declared to be venerated on 22 June 2004 by St Pope John Paul II and was beatified by Pope Benedict XVI – through the Cardinal-Prefect of the Congregation of the Causes of Saints – on 20 November 2005 in Mexico. Pope Francis approved a miracle attributed to him on 21 January 2016, allowing for his canonisation to take place and he was proclaimed to be a saint on 16 October 2016. 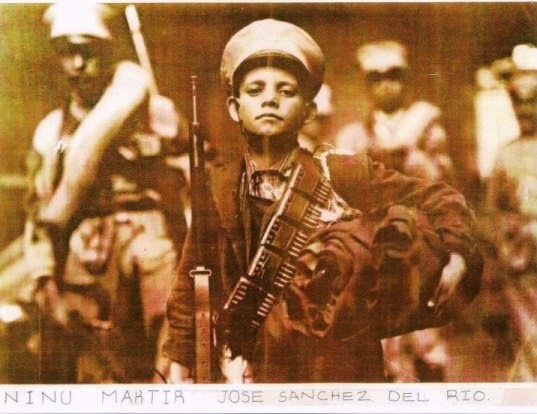 José Sánchez del Río was born on 28 March 1913 in Sahuayo, Michoacán, Mexico. Wanting to defend the faith and rights of Catholics, he followed in the footsteps of his two older brothers and asked his mother for permission to join the Cristeros. She objected, telling him that he was too young.  “Mama”, he replied, “do not let me lose the opportunity to gain Heaven so easily and so soon”.

At that time, the laws banned religious orders, deprived the Church of property rights and denied priests civil liberties, including the right to trial by jury and the right to vote. As the restrictions on religious liberty increased, Catholics could be fined or imprisoned for teaching Church doctrine, wearing clerical attire, meeting together after their convents were disbanded, promoting religious life or holding religious services in non-church locations.

On 5 February 1928 the young boy was captured during a battle and imprisoned in the church sacristy.   In order to terrorise him, soldiers made him watch the hanging of one of the other captured Cristeros.   But José encouraged the man, saying, “You will be in Heaven before me.   Prepare a place for me.  Tell Christ the King I shall be with Him soon”.

In prison, he prayed the Rosary and sang songs of faith.   He wrote a beautiful letter to his mother telling her that he was resigned to do God’s will.   José’s father attempted to ransom his son but was unable to raise the money in time. 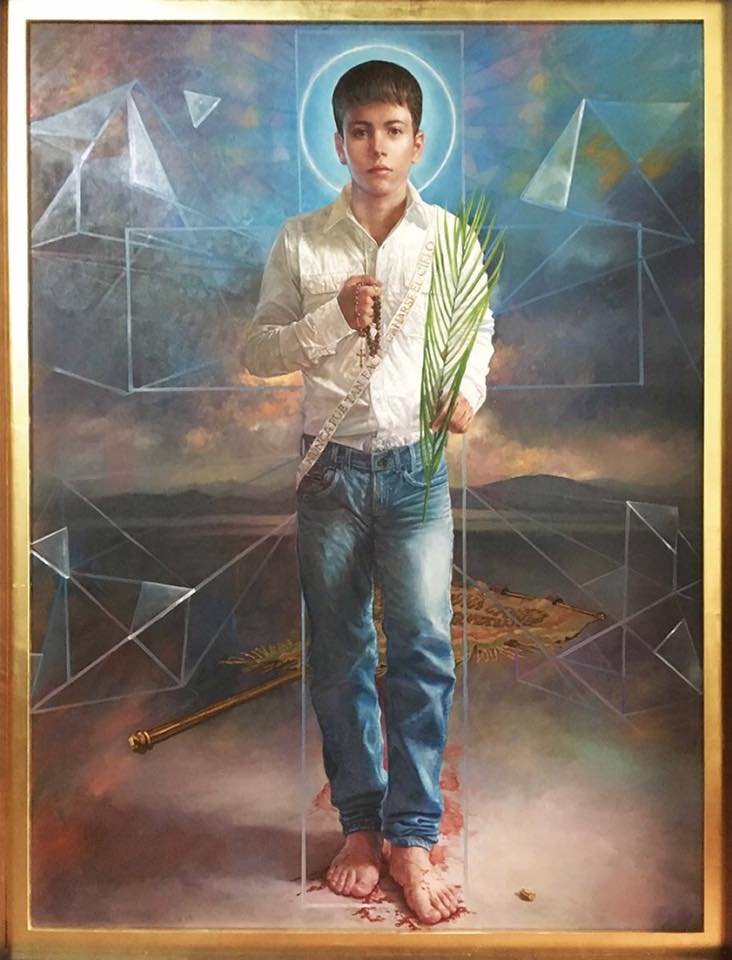 On 10 February 1928 the teenager was brutally tortured and the skin of the soles of his feet was sheered off;   he was then forced to walk on salt, followed by walking through the town to the cemetery.   The young boy screamed with pain but would not give in. 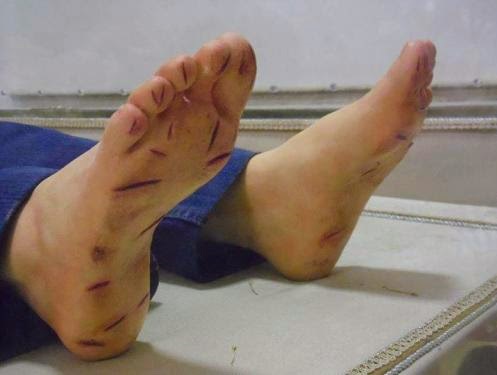 At times the soldiers stopped him and said, “If you shout, “Death to Christ the King’, we will spare your life”.   But he answered: “Long live Christ the King!   Long live Our Lady of Guadalupe!”. 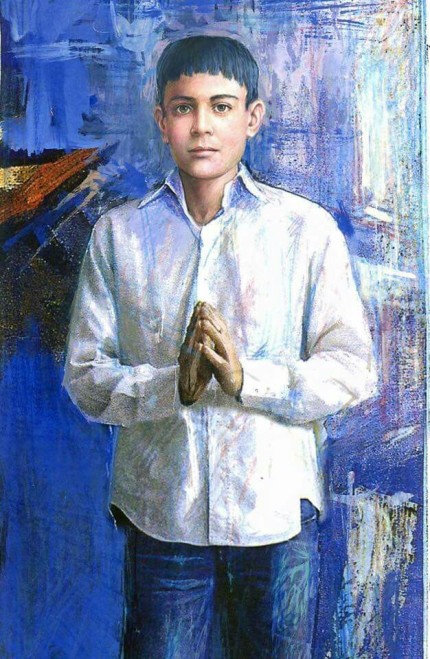 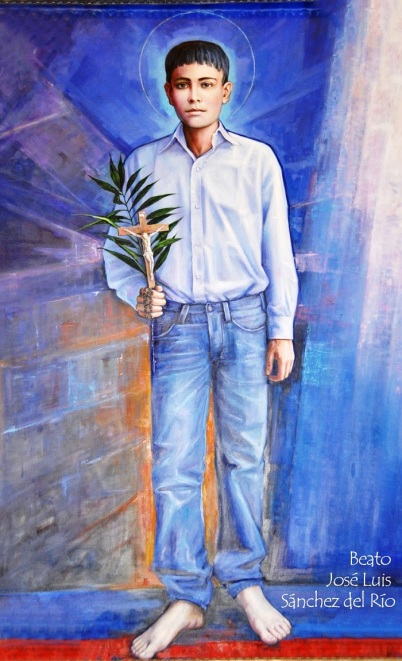 Once he arrived at the cemetery, José was asked once more if he would deny his faith. The 14 year old shouted out: “Long live Christ the King!”, and was summarily shot. (vatican.va)