NOVENA to OUR LADY of LOURDES – DAY ONE – 2 FEBRUARY (we Pray the Novena for our own intentions and for the sick, the infirm within our own communities but also for all those throughout the world who suffer, especially those who have no-one to pray for them in preparation for the Wold Day of the Sick on 11 February.)

O Mary Immaculate,
Our Lady of Lourdes,
virgin and mother, queen of heaven,
chosen from all eternity to be the Mother of the Eternal Word
and in virtue of this title preserved from original sin,
we kneel before you as did little Bernadette at Lourdes
and pray with childlike trust in you
that as we contemplate your glorious appearance at Lourdes,
you will look with mercy on our present petition
and secure for us a favorable answer to the request
for which we are making this novena.
……………………………………(make your request)
O Brilliant star of purity,
Mary Immaculate, Our Lady of Lourdes,
glorious in your assumption,
triumphant in your coronation,
show unto us the mercy of the Mother of God,
Virgin Mary, Queen and Mother,
be our comfort, hope, strength and consolation. Amen. 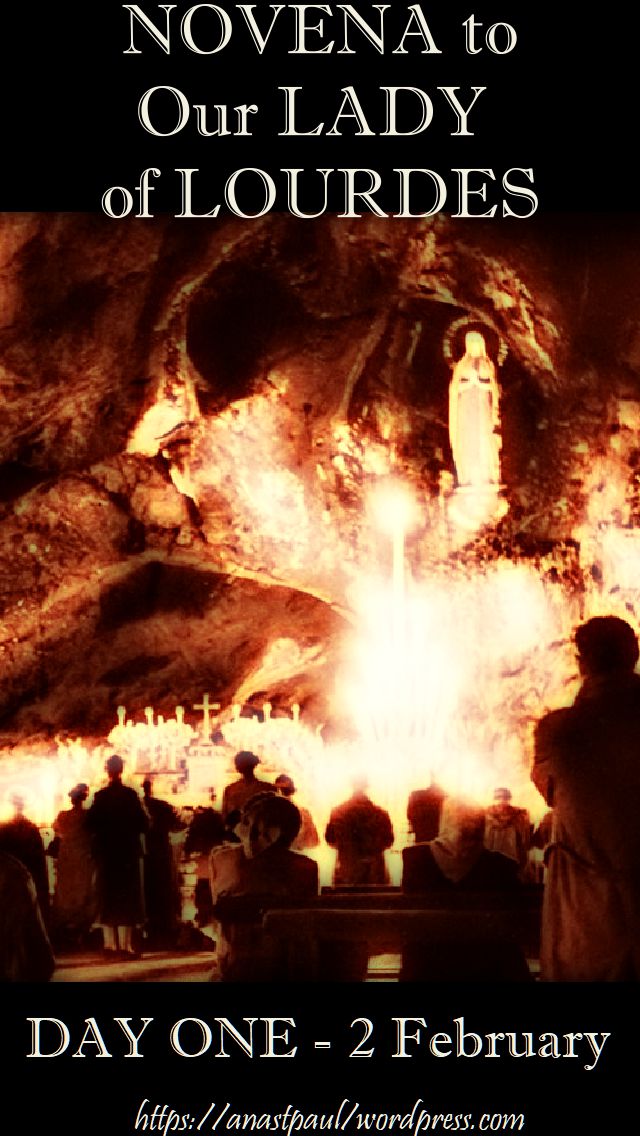 On this holy feast-day we each have an opportunity to consecrate our lives anew to the Lord.    How do we do this?    We can simply make a prayer of re-dedication to God which can take many forms.    It can be a simple heartfelt prayer reaffirming our baptismal promises or a re-visiting of our religious or marriage vows.    Or it can be a prayer which asks the Holy Spirit to renew our sense of vocation as a priest or religious or as a lay person in our chosen job, trade or profession.
We gave our life to the Lord when we were baptised but the call to conversion continues to resound throughout our lives and ‘this second conversion is an uninterrupted task for the whole church’ (Catechism of the Catholic Church 1428).    A re-dedication or renewal of vows or promises is a movement of conversion within our heart and is always a work of the Holy Spirit.
Today, step out in faith, whatever your vocation, whatever your calling and give your life to the Lord, in the assurance of God’s grace, blessing and renewal in the power of the Holy Spirit.

LET US PRAY FOR ALL CONSECRATED MEN & WOMEN AND FOR VOCATIONS:

Loving God, You call all who believe in You
to grow perfect in love
by following in the footsteps
of Christ Your Son.
Call from among us more men and women
who will serve You as religious.
Open the hearts of many, raise up
faithful servants of the Gospel, dedicated,
holy priests, sisters, brothers and deacons,
who will spend themselves for Your people
and their needs.
Bless those who are serving now
with courage and perseverance.
Grant that many will be inspired by their
example and faith.
By their way of life, may they provide a convincing sign
of Your Kingdom for the Church and the whole world.
We ask this through our Lord Jesus Christ. Amen. 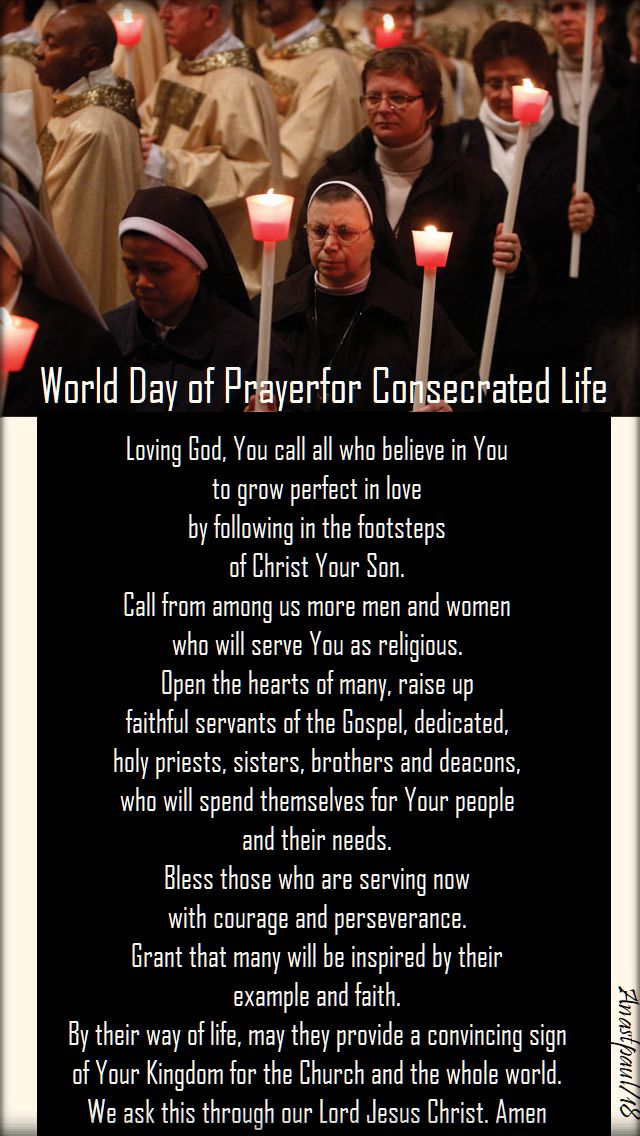 “The glorious St Simeon also was very happy…
to carry Him as did Our Lady…
we do this when we endure with love
the labours and pains He sends us,
that is to say, when the love which we bear
to the Law of God makes us find His yoke easy
and pleasing, so that we love these pains and labours,
and gather sweetness in the midst of bitterness.
This is nothing else but to carry Our Lord in our arms.
Now if we carry Him in this way,
He will, without doubt, Himself carry us.”

Although he was a Son, he learned obedience through what he suffered...Hebrews 5: 7-9 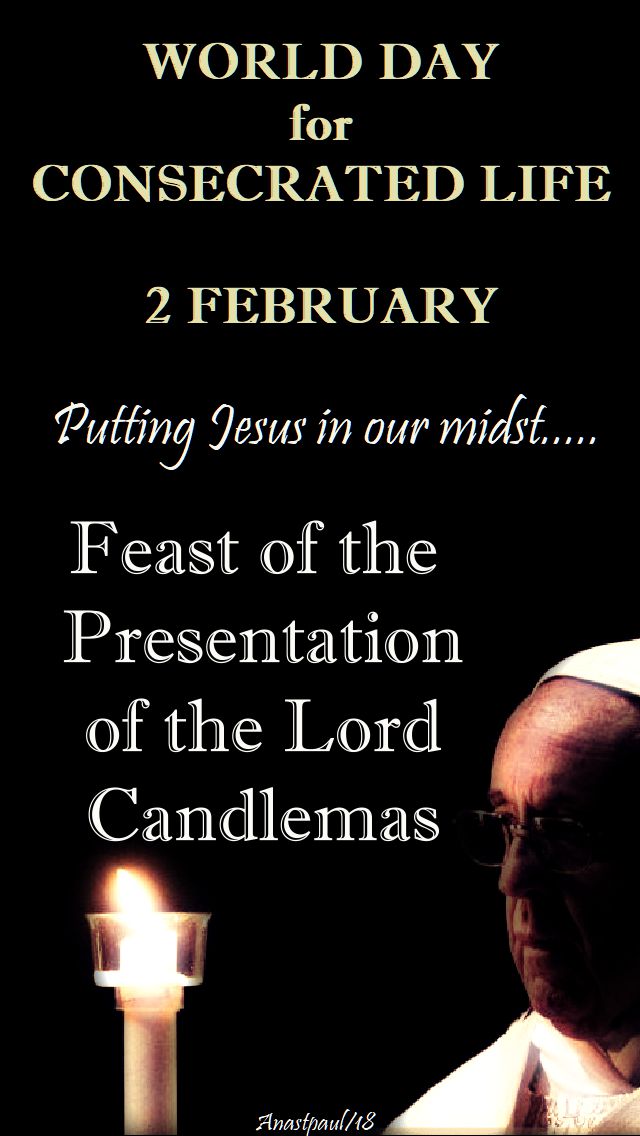 PRAYER – May the Lord renew in you and in all consecrated people each day the joyful response to His freely given and faithful love.   Dear brothers and sisters, like lighted candles, always and everywhere shine with the love of Christ, Light of the world.   May Mary Most Holy, the consecrated Woman, help you to live to the full, your special vocation and mission in the Church for the world’s salvation.   And may we all follow our Lord in obedience. Amen!

Hail to the Lord who comes,
comes to His temple gate,
not with His angel host,
not in His kingly state.

But borne upon the throne
of Mary’s gentle breast,
thus to His Father’s house
He comes, the heavenly guest.

The world’s true light draws near
all darkness to dispel,
the flame of faith is lit
and dies the power of hell.

Our bodies and our souls
are temples now for Him.
for we are born of grace –
God lights our souls within.

O Light of all the earth!
We light our lives with Thee.
The chains of darkness gone,
all sons of God are free.

Today is the Feast of the Presentation of the Lord, a day that is also known as Candlemas.

The Presentation of the Lord is a second ‘epiphany’—revealing Jesus as the Messiah through the canticle of Simeon and the testimony of Anna the prophetess.   Christ, the Light of the World, is revealed in obedience to the Old Lawsand in creation of the new. Traditionally, in recognition of the saving light of Christ, this feast was referred to as “Candlemas,” and marked by candlelight processionals and Masses.

The Presentation of the Lord commemorates the Lord Jesus’ participation in a ritual encoded in the Mosaic Law, in which a newborn child had to be “redeemed” through the performance of a prescribed sacrifice. Christ “embeds” Himself through his Incarnation in the people He has chosen to be His own.   He makes himself an Israelite and accepts that people and culture as His own.   His willingness to participate in this ritual indicates the election of Israel by God in terms of its mission to bear into the world the divine presence and to become the means through which communion with the one, true God would be extended to the whole world.

The event of the Lord’s Presentation also foreshadows His Paschal Mystery.   Christ will make of His suffering and death a sacrifice, a redemptive offering in which humanity’s reconciliation with God will be accomplished.   The Lord will be revealed, in the event of Christ’s passion, to be a God who is willing to forgive, even to the point of placing himself in the position of the sinner! Such is God’s solidarity with humanity in Christ!

The readings for today all orientate us toward Christ’s revelation as priest.

The prophet Malachi envisions the divine presence entering the temple and once this happens, the God of Israel reigns as the ruler of Israel, effecting the restoration of His people and setting them all in right relationship with Himself.   Christ in His Incarnation is this divine presence and His entry into the temple is happening at the moment of his Presentation.

The Letter to the Hebrews reminds us that Christ’s sacrifice was to enter into the fullness of our humanity by accepting for Himself a human nature and uniting it to His divine nature.   Christ does this for our benefit and through this Incarnation makes of Himself a gift that is for us.

In this respect, Christ is a priest, the sacrifice that He offers is Himself and the beneficiary of this sacrifice is all of us.

Simeon and Anna can see this revelation and appreciate it.   For them the moment is as profound as it is bittersweet, for they know that with the beginning of this new age for Israel, the previous era has ended.   Their mission is now complete.   The Israel of the covenant, the prophets, the law, the temple and the kingdom has been brought to its fulfilment.   All these divine gifts were foreshadowings of the greatest of all divine Gifts- Christ the Lord- God with us. 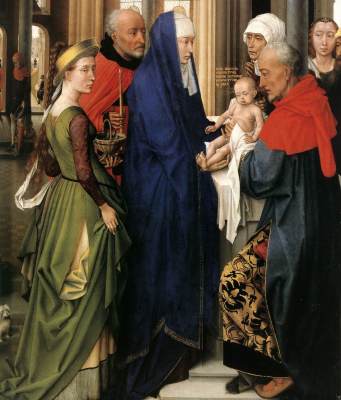 The gifts of Israel will be returned to the world but they will all be transformed in Christ, becoming what we know and experience as the Church.

Candles that are used in the Church’s rituals are often blessed on this day and a procession is recommended with candles to commemorate the entrance of Christ into the temple.

The symbolism of the candle is meant to recall the divine presence, manifested to Israel at the time of the Exodus as a “pillar of fire.”   This “pillar of fire” led the Israelites from bondage in Egypt to the land of God’s promise.   Christ is this “pillar of fire” who leads humanity from the bondage of sin and death to the promises of resurrection and eternal life. (Fr Steve Grunow)

It is Christ, the divine fire, that leads us still… 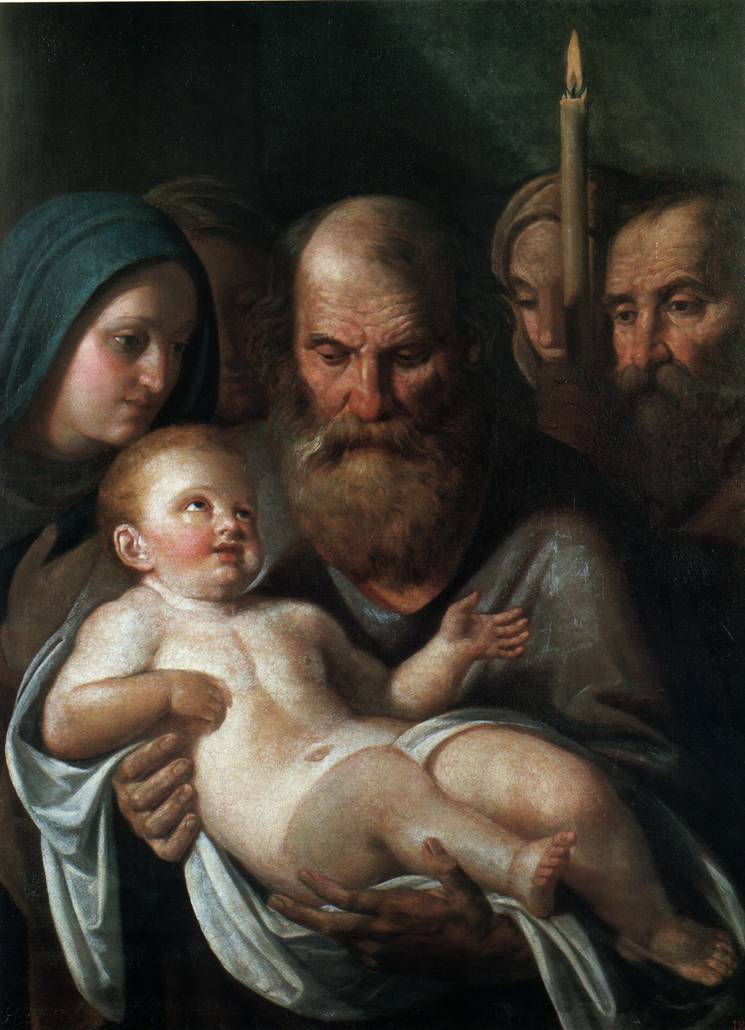 Presentation of the Lord (Feast):   The feast commemorates the purifying of the Blessed Virgin according to the Mosaic Law, 40 days after the birth of Christ, and the presentation of the Infant Jesus in the Temple.   The feast was introduced into the Eastern Empire by Emperor Justinian I and is mentioned in the Western Church in the Gelasian Sacramentary of the 7th century.   Candles are blessed on that day in commemoration of the words of Holy Simeon concerning Christ “a light to the revelation of the Gentiles” (Luke 2) and a procession with lighted candles is held in the church to represent the entry of Christ, the Light of the World, into the Temple of Jerusalem. “Candlemas” is still the name in Scotland for a legal term-day on which interest and rents are payable (2 February).
Patronage
• Jaro, Philippines
• Western Visayas, Philippines

World Day of Prayer for Consecrated Life:  Begun in 1997 by St Pope John Paul II, the World Day for Consecrated Life was intended to serve three purposes:
• to praise the Lord and thank him for the great gift of consecrated life;
• to promote a knowledge of and esteem for the consecrated life by the entire People of God;
• to allow those in consecrated life to celebrate together the marvels which the Lord has accomplished in them, to discover by a more illumined faith the rays of divine beauty, spread by the Spirit in their way of life and to acquire a more vivid consciousness of their irreplaceable mission, in the Church and in the world;
It serves an opportunity to highlight the extraordinary contributions of men and women religious, as well as a time to pray for vocations to the consecrated life.
—
St Adalbald of Ostrevant
St Adeloga of Kitzingen
St Agathodoros of Tyana
St Andrea Carlo Ferrari
St Apronian the Executioner
St Bruno of Ebsdorf
St Burchard of Wurzburg
St St Candidus the Martyr
Catherine del Ricci
St Columbanus of Ghent
St Cornelius the Centurion
St Felician the Martyr
St Feock
St Firmus of Rome
St Flosculus of Orléans
St Fortunatus the Martyr
St Giovanni Battista Clemente Saggio
St Hilarus the Martyr
St Jean Theophane Venard
St Jeanne de Lestonnac
St Lawrence of Canterbury
Bl Louis Alexander Alphonse Brisson
Bl Maria Domenica Mantovani
St Marquard of Hildesheim
St Mun
Bl Peter Cambiano
St Rogatus the Martyr
St Saturninus the Martyr
St Sicharia of Orleans
St Simon of Cassia Fidati
Bl Stephen Bellesini
St Theodoric of Ninden
St Victoria the Martyr
—
Martyrs of Ebsdorf: Members of the army of King Louis III of France under the leadership of Duke Saint Bruno of Ebsdorf. The martyrs died fighting invading pagan Norsemen, and defending the local Christian population. Four bishops, including Saint Marquard of Hildesheim and Saint Theodoric of Ninden, eleven nobles, and countless unnamed foot soldiers died repelling the invaders. They were martyred in the winter of 880 in battle at Luneberg Heath and Ebsdorf, Saxony (modern Germany).