“I don’t want to be an anti, against anybody.
I simply want to be the builder of a great affirmation:
the affirmation of God,
who loves us and who wants to save us.”

“There are many things that can only be seen through eyes that have cried.” 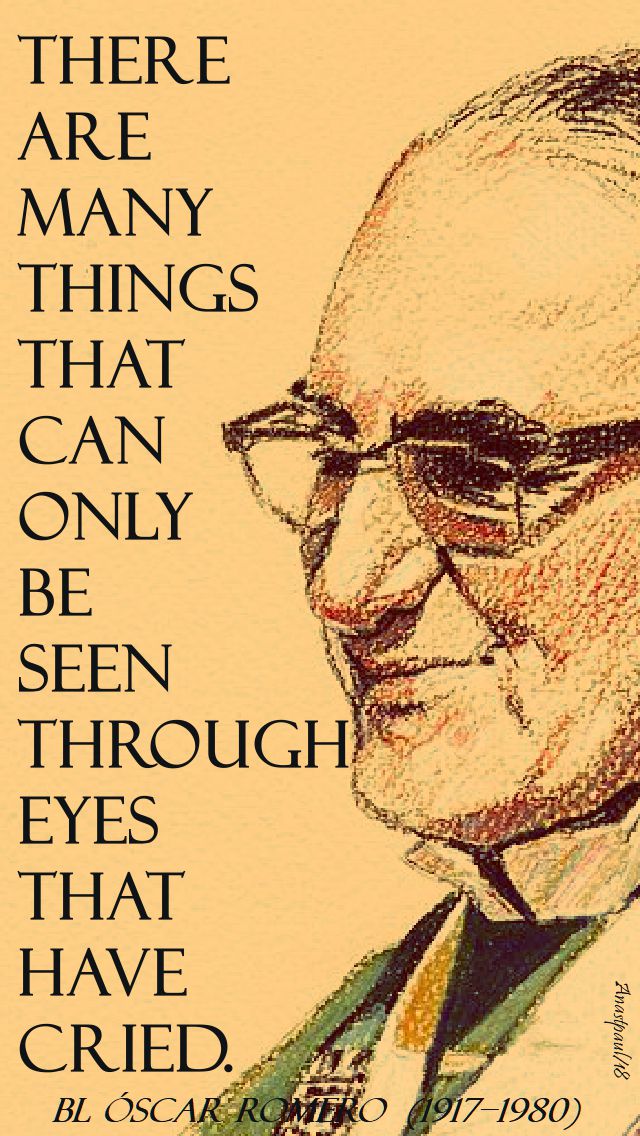 REFLECTION – “Archbishop Romero invites us to good sense and reflection, to respect for life and harmony.   It is necessary to renounce “the violence of the sword, of hate” and to live “the violence of love, that left Christ nailed to the Cross, that makes each one of us overcome selfishness and so that there be no more such cruel inequality between us”.   He knew how to see and experienced in his own flesh “the selfishness that hides itself in those who do not wish to give up what is theirs for the benefit of others”. And, with the heart of a father, he would worry about the “poor majority”, asking the powerful to convert “weapons into sickles for work”.
May those who hold Archbishop Romero as a friend of faith, those who invoke him as protector and intercessor, those who admire his image, find in him the strength and courage to build the Kingdom of God, to commit to a more equal and dignified social order.”…Pope Francis 23 May 2015 (Letter of Pope Francis on the Beatification of Bl Óscar Romero)

PRAYER – Almighty and everlasting God, You gave Blessed Óscar Romero, grace to fight to the death for the true faith.   Let his prayer enable us to endure every trial for love of You and to make all haste on our way to You, in whom alone is life.   We make our prayer, through our Lord Jesus Christ, our Saviour and Redeemer, in the unity of the Holy Spirit, one God, forever, amen. 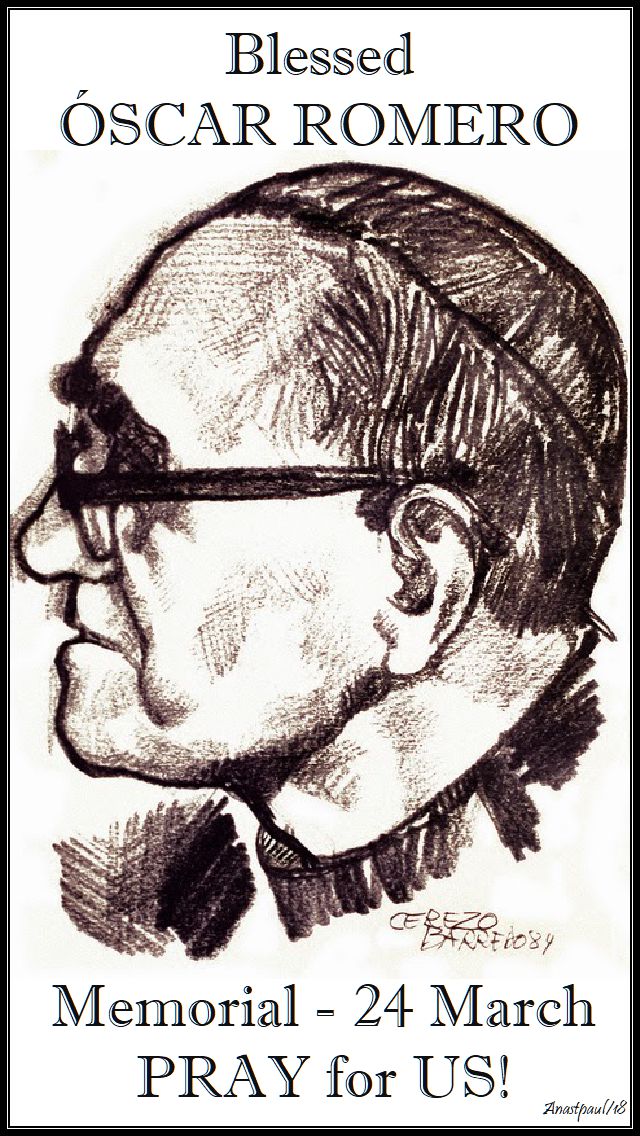 Thought for the Day – 24 March – The Memorial of Bl Óscar Arnulfo Romero y Galdámez (1917–1980) Martyr – Every now and then it helps us to take a step back and to see things from a distance.

Every now and then it helps us to take a step back
and to see things from a distance.
The Kingdom is not only beyond our efforts,
it is also beyond our visions.
In our lives, we manage to achieve only a small part
of the marvellous plan that is God’s work.
Nothing that we do is complete,
which is to say that the Kingdom is greater than ourselves.
No statement says everything that can be said.
No prayer completely expresses the faith.
No Creed brings perfection.
No pastoral visit solves every problem.
No programme fully accomplishes the mission of the Church.
No goal or purpose ever reaches completion.
This is what it is about:
We plant seeds that one day will grow.
We water seeds already planted,
knowing that others will watch over them.
We lay the foundations of something that will develop.
We add the yeast which will multiply our possibilities.
We cannot do everything,
yet it is liberating to begin.
This gives us the strength to do something and to do it well.
It may remain incomplete but it is a beginning, a step along the way.
It is an opportunity for the grace of God to enter and to do the rest.
It may be that we will never see its completion
but that is the difference between the master and the labourer.
We are labourers, not master builders,
servants, not the Messiah.
We are prophets of a future that does not belong to us.

O Lion of the Tribe of Judah,
the Root of David,
Who fights the good fight
and has called on all ment to join You,
give Your courage and strength
to all Your soldiers over the whole earth,
who are fighting under the standard of Your Cross.
Be with Your missionaries in pagan lands,
put right words into their mouths,
prosper their labours
and sustain them under their sufferings
with Your consolations
and carry them on,
even through torments
and blood (if it be necessary)
to their reward in Heaven.
Amen

Early life
Oscar Romero was born into a large family on 15 August 1917 in El Salvador.
Although they had more money than many of their neighbours, Oscar’s family had
neither electricity nor running water in their small home and the children slept on the
floor.  Oscar’s parents could not afford to send him to school after the age of twelve, so he went to work as an apprentice carpenter.   He quickly showed great skills but Oscar was already determined to become a priest.   He entered the seminary at the age of
fourteen and was ordained a priest when he was 25 in 1942.

Recognising the power of radio to reach the people, he convinced five radio stations
to broadcast his Sunday sermons to peasant farmers who believed they were
unwelcome in the churches.

In 1970, he became Auxiliary Bishop in San Salvador.   In 1974 he became Bishop of Santiago de Maria.    At this time, Oscar Romero was described as a conservative, not wanting to break from tradition.   He supported the hierarchy who encouraged conformity.   He was uncomfortable with social action that challenged political leaders.
Growing awareness during his two years as Bishop of Santiago de Maria, Romero was horrified to find that children were dying because their parents could not pay for simple medicines.   He began using the resources of the diocese and his own personal resources to help the poor but he knew that simple charity was not enough.   He wrote in his diary that people who are poor should not just receive handouts from the Church or the government but participate in changing their lives for the future.

In 1977, Romero became Archbishop of San Salvador, the capital city.   The situation in El Salvador was becoming worse and he couldn’t remain silent any longer.   The military were killing the Salvadorian people – especially those demanding justice such as teachers, nuns and priests – including Romero’s good friend, Fr Rutilio Grande.
Thousands of people began to go missing.   Romero demanded that the President of El Salvador thoroughly investigate the killings but he failed to do so.

Voice of the voiceless
In his actions and words, Oscar demanded a peace that could only be found by ensuring people had access to basic needs and their rights upheld.   He raised awareness globally about the people in his country who had been killed or “disappeared”.   When he visited the Vatican in 1979, Oscar Romero presented the Pope with seven detailed reports of murder, torture, and kidnapping throughout El Salvador.   In 1979, the number of people being killed rose to more than 3000 per month.   Oscar Romero had nothing left to offer his people except faith and hope.   He continued to use the radio broadcast of his Sunday sermons to tell people what was happening throughout the country, to talk about the role of the Church and to offer his listeners hope that they would not suffer and die in vain. 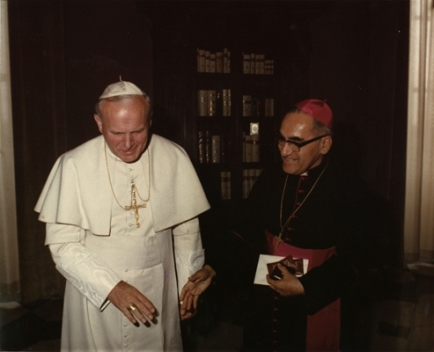 Martyrdom
On March 23, 1980, after reporting the previous week’s deaths and disappearances, Oscar Romero began to speak directly to soldiers and policemen:  “I beg you, I implore you, I order you… in the name of God, stop the repression!”   The following evening, while saying Mass in the chapel of Divine Providence Hospital, Archbishop Oscar Romero was shot by a paid assassin.
Only moments before his death, Romero spoke these prophetic words: “Those who surrender to the service of the poor through love of Christ will live like the grain of wheat that dies… The harvest comes because of the grain that dies.”   Like many great leaders who have fought for truth, Oscar Romero was killed and became a martyr but his voice could not be silenced.   He is a symbol of hope in a country that has suffered poverty, injustice and violence.

To date, no one has ever been prosecuted for the assassination, or confessed to it.   The gunman has not been identified. 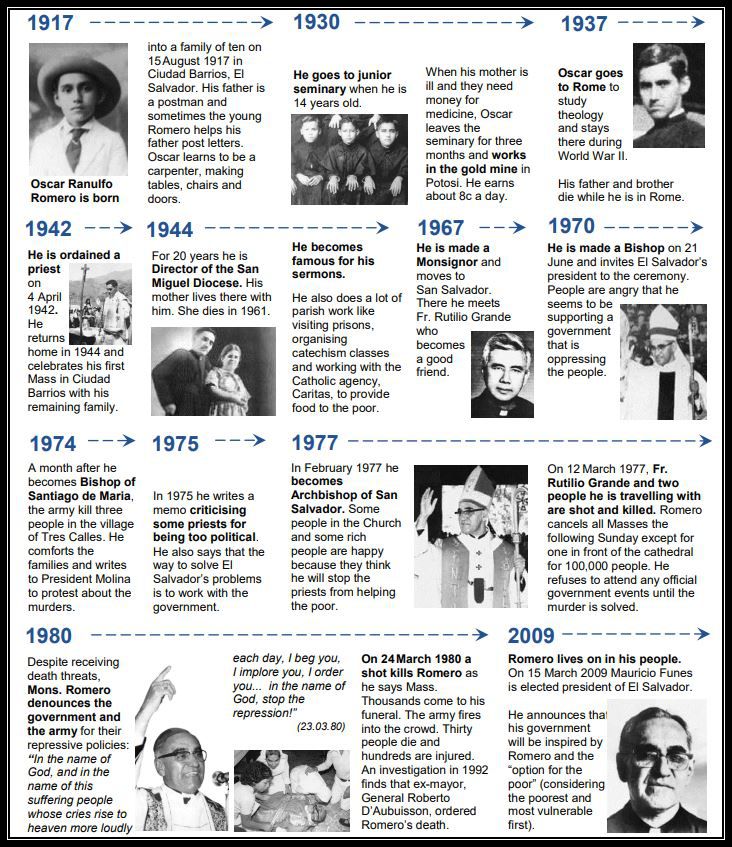 Funeral
Romero was buried in the Metropolitan Cathedral of San Salvador (Catedral Metropolitana de San Salvador).   The Funeral Mass on 30 March 1980 in San Salvador was attended by more than 250,000 mourners from all over the world.   Viewing this attendance as a protest, Jesuit priest John Dear has said, “Romero’s funeral was the largest demonstration in Salvadoran history, some say in the history of Latin America.”

At the funeral, Cardinal Ernesto Corripio y Ahumada, speaking as the personal delegate of St Pope John Paul II, eulogised Romero as a “beloved, peacemaking man of God,” and stated that “his blood will give fruit to brotherhood, love and peace.”

Massacre at Romero’s funeral
During the ceremony, smoke bombs exploded on the streets near the cathedral and subsequently there were rifle shots that came from surrounding buildings, including the National Palace.   Many people were killed by gunfire and in the stampede of people running away from the explosions and gunfire;  official sources reported 31 overall casualties, while journalists recorded that between 30 and 50 died.   Some witnesses claimed it was government security forces that threw bombs into the crowd and army sharpshooters, dressed as civilians, that fired into the chaos from the balcony or roof of the National Palace.   However, there are contradictory accounts as to the course of the events and “probably, one will never know the truth about the interrupted funeral.”

As the gunfire continued, Romero’s body was buried in a crypt beneath the sanctuary. Even after the burial, people continued to line up to pay homage to their martyred prelate.

Spiritual life
Bl Oscar Romero noted in his diary on 4 February 1943:  “In recent days the Lord has inspired in me a great desire for holiness.   I have been thinking of how far a soul can ascend if it lets itself be possessed entirely by God.”   Commenting on this passage, James R Brockman, S.J., Romero’s biographer and author of Romero:  A Life, said that “All the evidence available indicates that he continued on his quest for holiness until the end of his life.   But he also matured in that quest.”
According to Brockman, Romero’s spiritual journey had some of these characteristics:

St Pigmenius of Rome
St Romulus of North Africa
St Secundus of North Africa
St Seleucus of Syria
St Severo of Catania
St Timothy of Rome
—
Martyrs of Africa – 9 saints: A group of Christians murdered for their faith in Africa, date unknown. The only details about their that survive are the names – Aprilis, Autus, Catula, Coliondola, Joseph, Rogatus, Salitor, Saturninus and Victorinus.

Martyrs of Caesarea – 6 saints: A group of Christians martyred together in the persecutions of Diocletian. We know little else but six of their names – Agapius, Alexander, Dionysius, Pausis, Romulus and Timolaus. They were martyred by beheading in 303 at Caesarea, Palestine.