“Calls You by Your Name”

God beholds me individually, whoever I am.

He “calls you by your name”.

He sees me and understands me, as He made me.   He knows what is in me, all my own peculiar feelings and thoughts, my dispositions and likings, my strength and my weakness.   He views me in my day of rejoicing and my day of sorrow.   He sympathises in my hopes and my temptations.   He interests Himself in all my anxieties and remembrances, all the risings and fallings of my spirit.   He has numbered the very hairs of my head and the cubits of my stature.   He compasses me round and bears me in His arms.   He takes me up and sets me down. 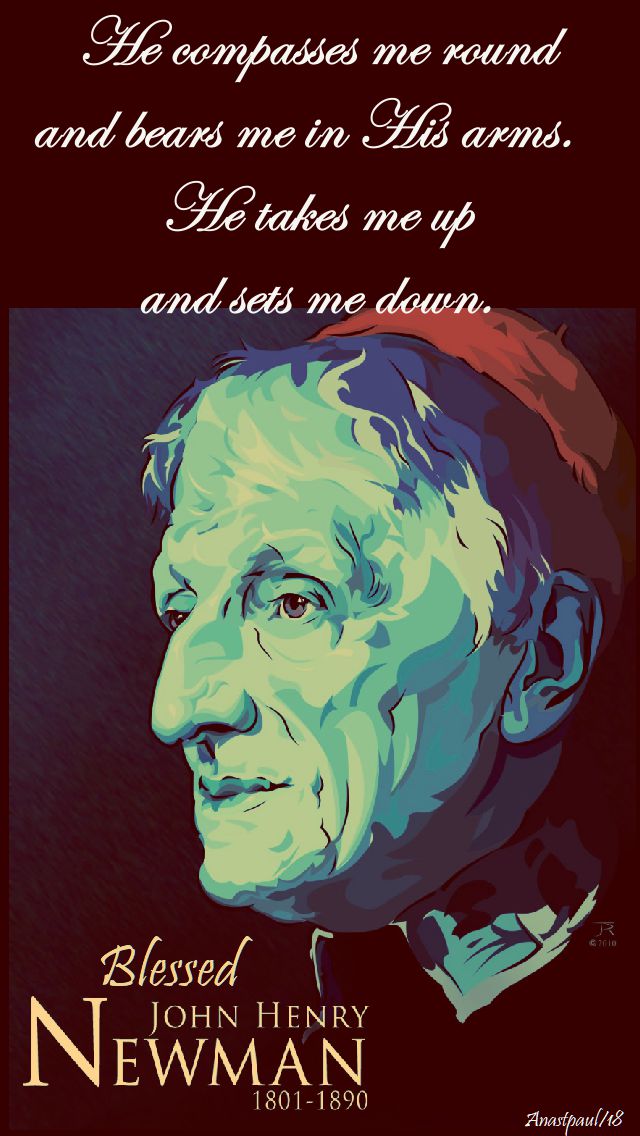 He notes my very countenance, whether smiling or in tears, whether healthful or sickly.   He looks tenderly upon my hands and my feet.   He hears my voice, the beating of my heart and my very breathing.   I do not love my self better than He loves me.   I cannot shrink from pain more than He dislikes my bearing it and if He puts it on me, it is as I will put it on myself, if I am wise, for a greater good afterwards…

I Will Put Myself In Your Hands

O my God, I will put myself
without reserve into Your hands.
Wealth or woe,
joy or sorrow,
friends or bereavement,
honour or humiliation,
good report or ill report,
comfort or discomfort.
Your presence or the
hiding of Your countenance,
all is good
if it comes from You.
You are Wisdom
and You are love –
what can I desire more.
Amen 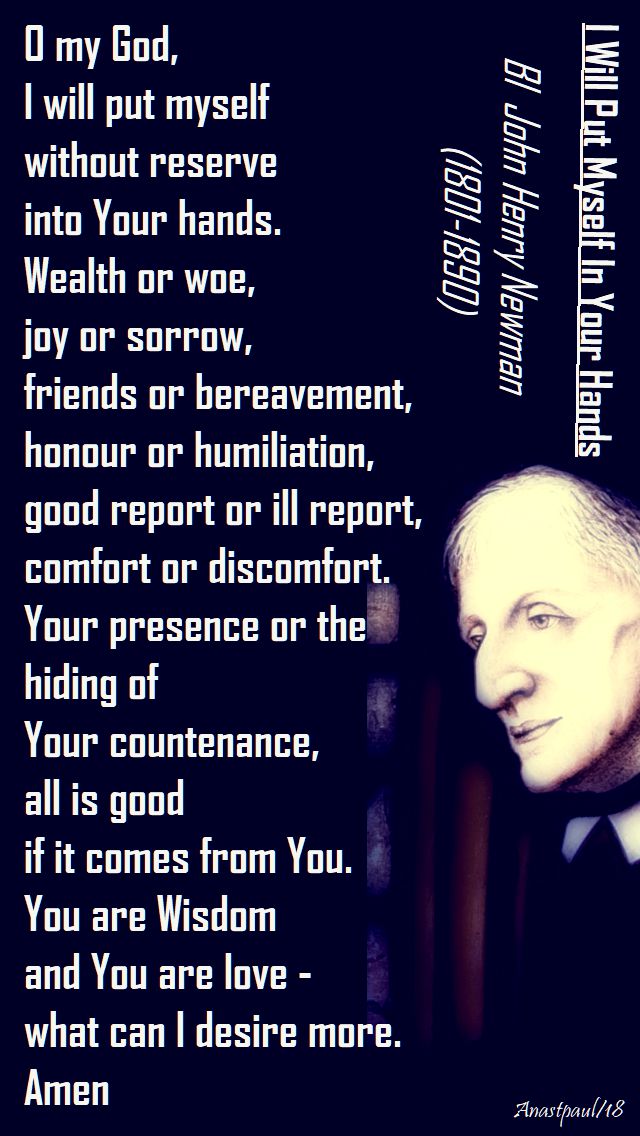 Try to fulfil each day’s task
steadily and cheerfully.
The life of a true Christian
should be a perpetual jubilee,
a prelude to the festivals of eternity. 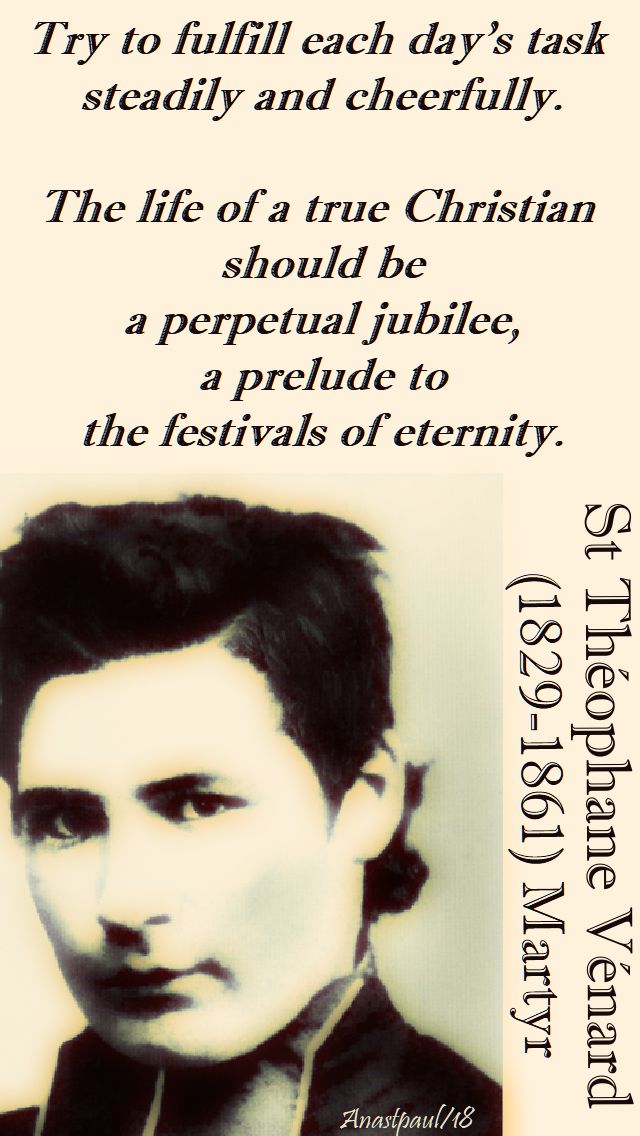 Do not waste time bothering
whether you “love” your neighbour;
act as if you did.
As soon as we do this we find
one of the great secrets.
When you are behaving as if
you loved someone,
you will presently come to love him. 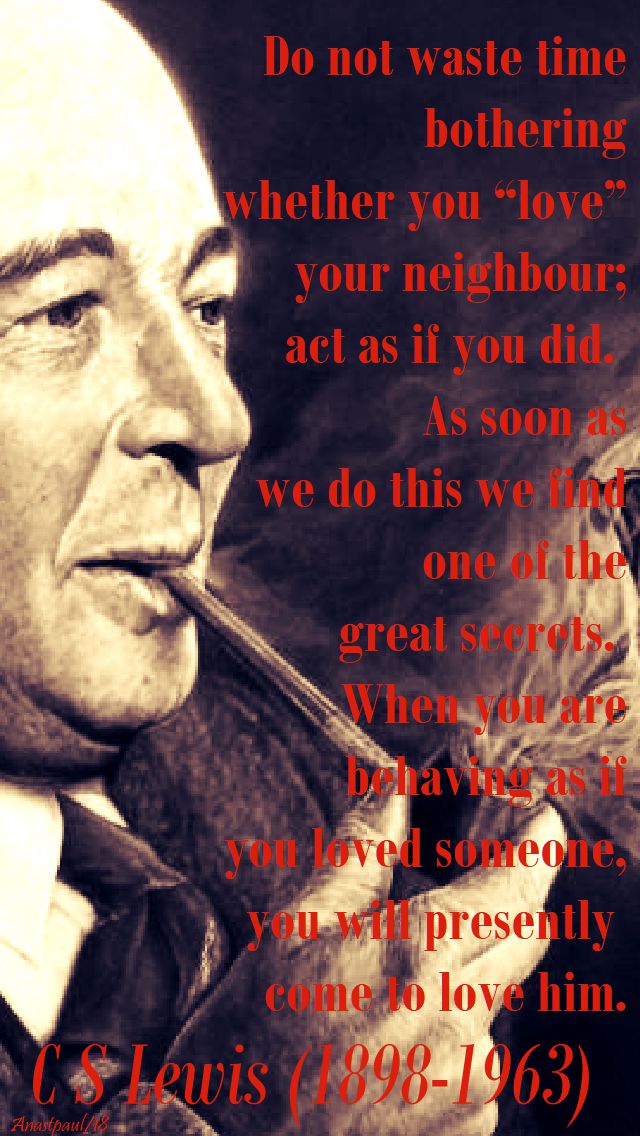 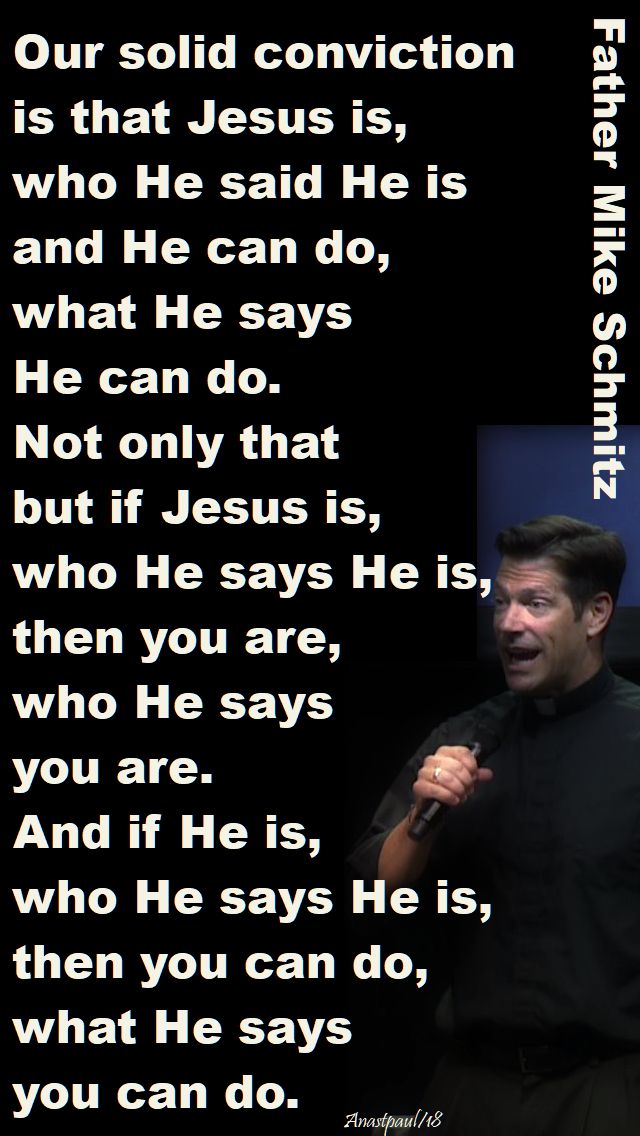 …”for if this plan or this undertaking is of men, it will fail; but if it is of God, you will not be able to overthrow them.   You might even be found opposing God!”… Then they left the presence of the council, rejoicing that they were counted worthy to suffer dishonour for the name.   And every day in the temple and at home they did not cease teaching and preaching Jesus as the Christ…Acts 5:38,40-42

REFLECTION – “We cannot keep ourselves shut up in parishes, in our communities, when so many people are waiting for the Gospel!   We cannot be Christians part-time.   If Christ is at the centre of our lives, He is present in all that we do.”…Pope Francis

PRAYER – Almighty, ever-living God, grant us the grace to bear the hardships of this life with a steadfast mind, even as You strengthened the Apostles and all the Saints after them, whom no threats could daunt, no pains or penalties break.   Dear sweet St Margaret of Castello, you who disregarded your own sufferings to help those who suffer more, pray for us!   Through Jesus our Lord, in the unity of the Holy Spirit, one God forever, amen.

O Lord my God.
Teach my heart this day
where and how to find You.
You have made me and re-made me,
and You have bestowed on me
all the good things I possess,
and still I do not know You.
I have not yet done
that for which I was made.
Teach me to seek You,
for I cannot seek You
unless You teach me,
or find You
unless You show yourself to me.
Let me seek You in my desire;
let me desire You in my seeking.
Let me find You by loving You;
let me love You when I find You.
Amen

Saint of the Day – 13 April – Blessed Margaret of Castello O.P. (1287-1320) was an Italian professed member from the Third Order of Saint Dominic. Margaret was disabled and became known for her deep faith and holiness.   Patronages – against poverty, disabled people, handicapped people, people rejected by religious orders, physically challenged people, Right To Life groups.   Her body is incorrupt. 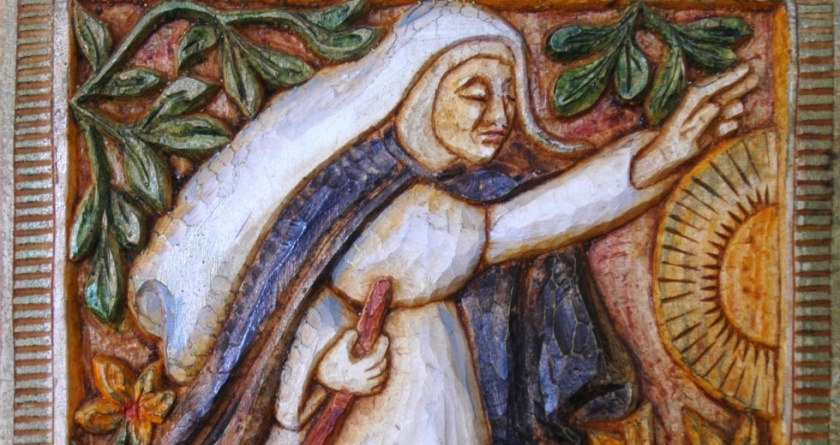 Bl Margaret of Castello was born in the fourteenth century in Metola, Italy to noble parents who wanted a son.   When the news was brought to the new mother that her newborn daughter was a blind, hunchbacked dwarf, both parents were horrified.   Little Margaret was kept in a secluded section of the family castle in the hopes that her existence would be kept secret.   However, when she was about six years old, she accidentally made her presence known to a guest.   Determined to keep her out of the public eye, her father had a room without a door built onto the side of the parish church and walled Margaret inside this room.   Here she lived until she was sixteen, never being allowed to come out.   Her food and other necessities were passed in to her through a window.   Another window into the church allowed her to hear Mass and receive Holy Communion.   The parish priest became a good friend and took upon himself the duty to educate her.   He was amazed at her docility and the depth of her spiritual wisdom.

When Margaret was sixteen years old, her parents heard of a shrine in Citta di Castello, Italy, where many sick people were cured.   They made a pilgrimage to the shrine so that she could pray for healing.   However, Margaret, open to the will of God, was not healed that day, or the next, so her parents callously abandoned her in the streets of the town and left for home, never to see her again.   At the mercy of the passersby, Margaret had to beg her food and eventually sought shelter with some Dominican nuns.

W. R. Bonniwell writes, “Her cheerfulness, based on her trust in God’s love and goodness, was extraordinary.   She became a Dominican tertiary and devoted herself to tending the sick and the dying” as well as prisoners in the city jail.

Deprived of all human companionship, Margaret learned to embrace her Lord in solitude.   Instead of becoming bitter, she forgave her parents for their ill treatment of her and treated others as well as she could.   Her cheerfulness stemmed from her conviction that God loves each person infinitely, for He has made each person in His own image and likeness.   This same cheerfulness won the hearts of the poor of Castello and they took her into their homes for as long as their purses could afford.   She passed from house to house in this way, “a homeless beggar being practically adopted by the poor of a city” (Bonniwell, 1955).

Bl Margaret died on 13 April 1320 at the age of 33.   More than 200 miracles have been credited to her intercession since her death.   She was beatified on 19 October 1609 by Pope Paul V (concession of indult for Mass and Office).   Thus, the daughter that nobody wanted is now one of the glories of the Church.