Thought for the Day -21 April – Saturday of the Third Week of Eastertide and the Memorial of St Conrad of Parzham OFM Cap. (1818-1894)

Resolutions of St Conrad whilst a Novice

1. I resolve in the first place to remain continually
in the presence of God
and to ask myself frequently if I would do this or that,
if my confessor or superior were watching me
and especially if God and my guardian angel were present.

2. I resolve to ask myself, whenever I have to encounter crosses of suffering,
“Conrad, why have you come here?”

3. I resolve to avoid leaving the friary, as far as possible,
unless it be out of love for my neighbour, obedience, reasons of health,
a pious pilgrimage or some other good cause.

4. I resolve to foster fraternal charity in myself and in others.
Therefore, I resolve to take care never to say an unkind word.
I resolve to bear up patiently with the defects and weaknesses of others
and as far as possible, to hide them, with the mantle of charity,
unless I am in duty bound, to manifest them, to someone,
who is in a position to correct them.

5. I resolve to observe silence conscientiously.
I resolve to speak briefly and so avoid many pitfalls
and be better able to converse with God.

6. When at table I resolve to place myself in the presence of God,
as far as I can, to remain recollected and to pass up my favorite dishes
so as to practice a hidden form of mortification.
I resolve not to eat between meals, unless ordered to do so,
under obedience.

7. I resolve to answer the first call of the bell unless legitimately hindered.

8. I resolve to avoid, as far as possible, conversing with the opposite sex
unless obedience imposes duties on me which make it necessary to speak with women.
In that case I resolve to be very reserved and maintain custody of the eyes.

9. I resolve to carry out orders punctually and to the letter.
I resolve especially to make every effort to conquer my own will in all things.

10. I resolve to force myself to pay close attention to minor details
and as far as possible avoid every imperfection.
I resolve to observe the holy rule faithfully
and not to depart from it a hairsbreadth, come what may.

11. I resolve to cultivate a deep devotion to the Blessed Virgin Mary
and strive to imitate her virtues. 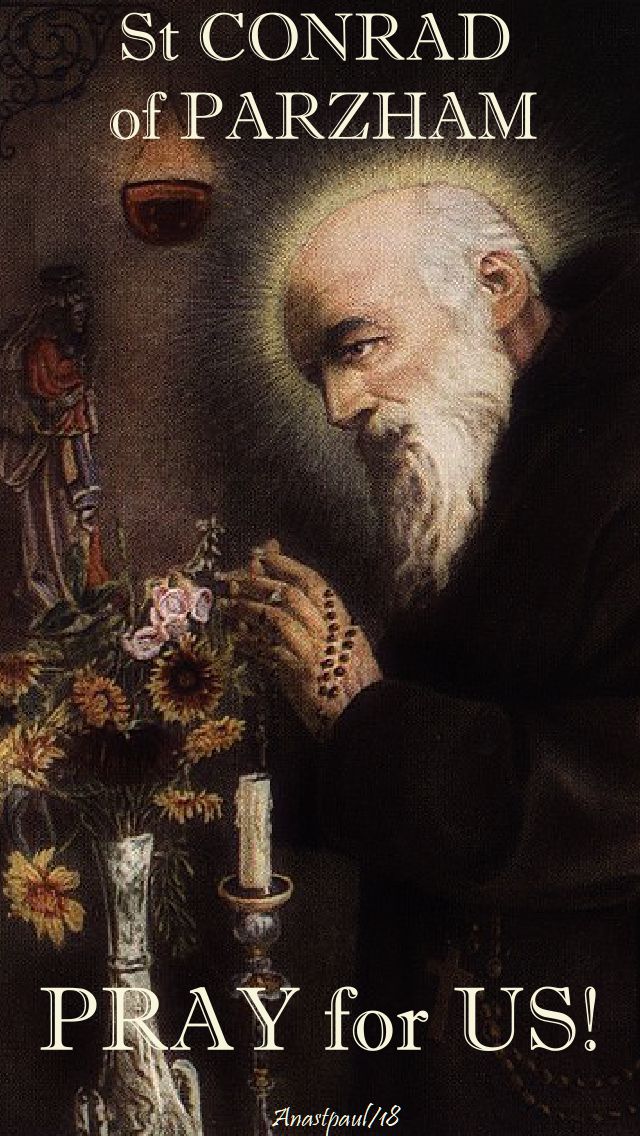 I have come to spend
a few moments with You, O Jesus
and in spirit I prostrate myself in the dust
before Your Holy Tabernacle to adore You,
my Lord and God, in deepest humility.
Once more, a day has come to its close, dear Jesus,
another day which brings me nearer to the grave
and my beloved heavenly home.
Once more, O Jesus, my heart longs for You,
the true Bread of Life, which contains
all sweetness and relish.
O my Jesus,
mercifully grant me pardon for the faults
and ingratitude of this day
and come to me,
to refresh my poor heart which longs for You.
As the heart pants for the waters,
as the parched earth longs for the dew of heaven,
even so does my poor heart long for You,
You Fount of Life.
I love You, O Jesus,
I hope in You,
I love You
and out of love for You,
I regret sincerely all my sins.
May Your peace and Your benediction be mine,
now and always and for all eternity.
Amen

What shall I render to the Lord for all his bounty to me?…Psalm 116:12

REFLECTION – “It was God’s will that I should leave everything that was near and dear to me.   I thank Him for having called me to religious life where I have found such peace and joy as I could never have found in the world.   My plan of life is chiefly this: to love and suffer, always meditating upon, adoring and admiring God’s unspeakable love for His lowliest creatures.” – St Conrad of Parzham (1818-1894) (from a letter of Saint Conrad)

PRAYER – Lord God, our Father, in You is our hope and our life.   You have made us and be belong to You.   Give us Your grace and Your help to constantly render to You, our love and gratitude and to suffer for that great love, by which You sent your only Son to save us.   St Conrad, pray for us that we may grow in holiness and soon meet you in heaven, amen.

We love You, O God
and desire to love You more and more.
Grant that we may love You
as we wish to love You
and as we should love You.
O dearest Friend
who has loved us so deeply and redeemed us;
come and take Your place in our hearts.
Watch over our lips, our steps and our deeds
and we no longer fear for soul and body.
Yes, give us love, most precious of gifts,
which knows no enemies.
Give our hearts that pure love
borne of Your love for us,
that we may love others as You love us.
O most loving Father of Jesus Christ
from whom all love flows,
grant that our hearts, frozen in sin
and grown cold toward You,
may be warmed in the divine glow.
Help and bless us in Your Son.
O blessed Lord,
You have commanded us to love one another,
give us the grace that, as we have received
Your unmerited favours,
we may love all persons in You and for You.
We implore your clemency for all people
but particularly for our friends
whom You have given us.
Love them, Source of Love and instill in them
a thorough love of Yourself,
that they may seek, utter and do nothing
save what is pleasing to You.
Amen

Saint of the Day – 21 April – St Conrad of Parzham OFM Cap (1818-1894) – Franciscan Religious Lay Friar, Blessed Sacrament and Marian devotee, Apostle of Charity, Miracle worker with the charism of prophecy – born on 22 December 1818 at Parzham, Bavaria, Germany as Johann Birndorfer and died on 21 April 1894 in Altötting, Bavaria, Germany of natural causes.  He served for over 40 years in the post of porter of the Capuchin friary in Altötting, through which work he gained a widespread reputation for his wisdom, holiness and charity.   Patronages – Capuchin-Franciscan Province of Mid-America, Catholic Student Association, doorkeepers, Passau, Germany, diocese of (since 1984).

St Conrad of Parzham was born in Bavaria, Germany on 22 December 1818.   He was the ninth son of a poor farming family.   From his early years he gave evident signs of a deep interior life, preferring places of solitude where he could be alone with God.   Despite the great distance from the nearest Church, Conrad walked frequently through rain and snow to attend the holy Mass.   He had a great devotion to Our Lady and prayed the Rosary daily.

Conrad remained on the farm without much thought of the future.   His mother died when he was only 14.   At age 31, with the passing of his father, Conrad decided to follow his heart and become a Capuchin Franciscan.   After giving away his possessions he was admitted to the novitiate as a lay brother and received the religious name Conrad (his Baptismal name was John).   Immediately after his profession he was sent to the friary of St Ann, in the city of Altötting.   The friary served the Shrine of Our Lady of Altötting, the National Shrine of Bavaria to the Blessed Mother.

Conrad was given the position of porter at this shrine and retained it until his death.  Because it was a large and busy city, the duty of the friary porter was a very difficult one. Conrad was known to be diligent at his work, sparing in words, bountiful to the poor, eager and ready to receive and help strangers.   Brother Conrad fulfilled the task of porter for more than forty years, assisting the inhabitants of the town in their needs of body and soul. 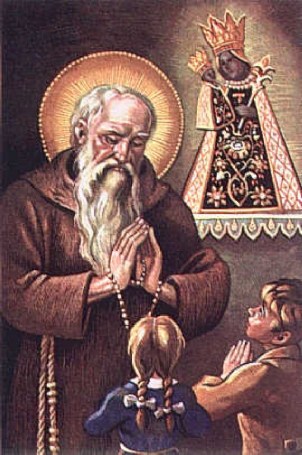 Conrad loved silence!   As mentioned, he sought places of solitude as a child in order to raise his thoughts to God.   During his spare moments as a porter, he would duck into a nook near the door where it was possible to see the Blessed Sacrament in the nearby chapel.   During the night, he often deprived himself of hours of sleep in order to be alone with Jesus in the chapel.   It was generally believed that he never took any rest but continually occupied himself in work and exercises of devotion.   Conrad also continued his childhood devotion to Our Lady, deepening his love for the Mother of God with every year of his religious life.   These were his great secrets to sanctity:  Silence, the Blessed Sacrament and Mary, Queen of the Friars Minor. 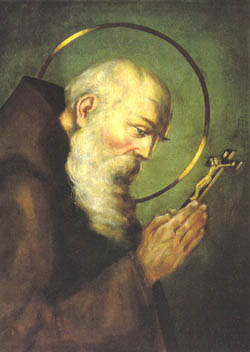 During his lifetime, Brother Conrad was reputed to have been able to read the hearts of those he met and was attributed the gift of prophecy.   His heroic virtues and the miracles he performed won for him the distinction to be ranked among the Blessed by Pope Pius XI in 1930.   Four years later, the same pope, approving additional miracles which had been performed, solemnly inscribed his name in the list of saints. 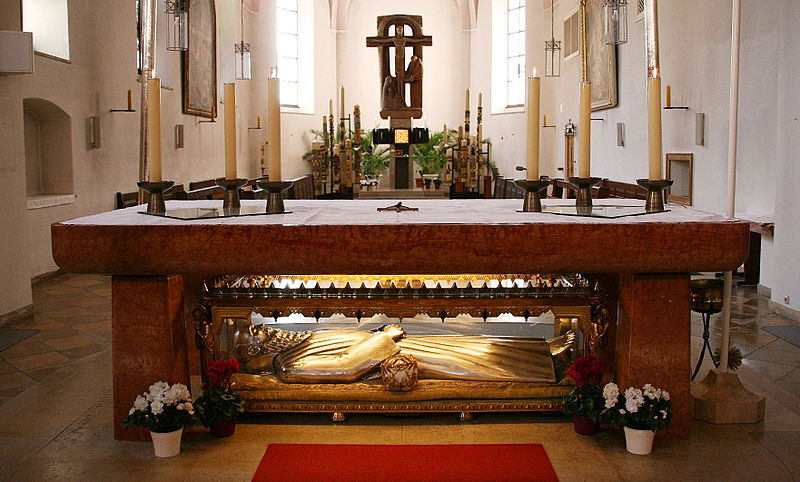