POPE LEO!  OR, A SKETCH ABOUT A DEAD PARROT

Pope Leo IX is a celebrated figure in medieval history, famous for his role in church reform – attacking clerical marriage and simony, and strongly asserting the superiority of St Peter’s see within the church.   He had also been deeply affected by the attack of a demonic toad (!) during his childhood, which one might imagine would encourage a degree of circumspection about animals.

Yet the Toul Life of Pope Leo IX, from which this information comes, makes it clear that this deeply serious man was thrilled by the gift of a bird that talked (presumably in Latin).   Whenever implementing Church Reform and papal primacy just got a bit much, Leo would go to his rooms, and be cheered up by listening to his parrot saying ‘Pope Leo’, over and over again.

Extract from the Life of Pope Leo IX, tr. Robinson (The Papal Reform of the 11th Century, Manchester, 2004)

“Among the many who strove to visit his [Leo’s] presence, the king of Denmark sent him a parrot as a gift, in which divine grace appeared through an admirable virtue. Certain birds can indeed be mastered by hunger and taught to pronounce human words; but it is said that this bird without compulsion throughout the journey on which he was brought to the lord pontiff continued to say, ‘I am going to the pope.’ Immediately on being presented to him, without being taught, the bird exclaimed in a sweet voice, ‘Pope Leo!’ Whenever this venerable pastor, fatigued by the conduct of business, retired to his private room or when some sadness chanced to oppress his mind, afflicted by excessive cares, this bird often alleviated his distress and, by sweetly and succinctly repeating ‘Pope Leo’, he restored his mental vigour.”

Pope Leo died in 1054.   One might wonder whether his successor, Victor II, would have found the parrot’s constant repetition of ‘Pope Leo!’ quite as endlessly entertaining. Luckily for him, he did not have to put up with it.   For according to a number of manuscripts, the parrot fell into Leo’s grave and died ‘from excessive grief’, ‘as if it were unwilling to live without him’.   Leo’s affection for his divinely-inspired pet was, apparently, reciprocated.

St Pope Leo IX, smile with us and pray for us! 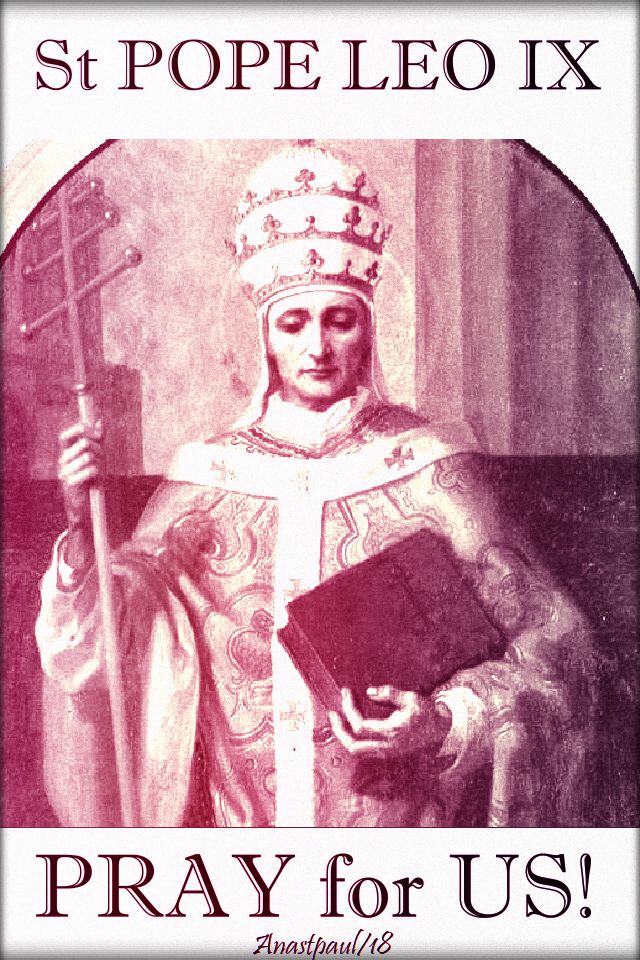 “Speaking of:  Becoming a Saint”

“Think well.
Speak well.
Do well.
These three things,
through the mercy of God,
will make a man go to Heaven.” 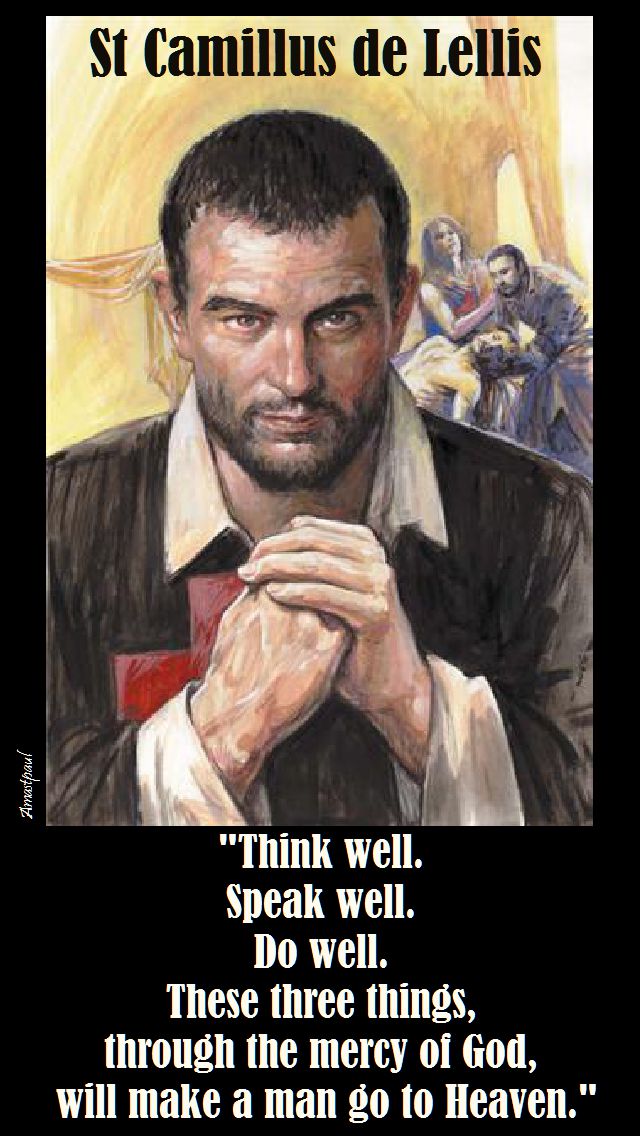 “The great saint may be said,
to mix all his thoughts with thanks.
All goods look better,
when they look like gifts.” 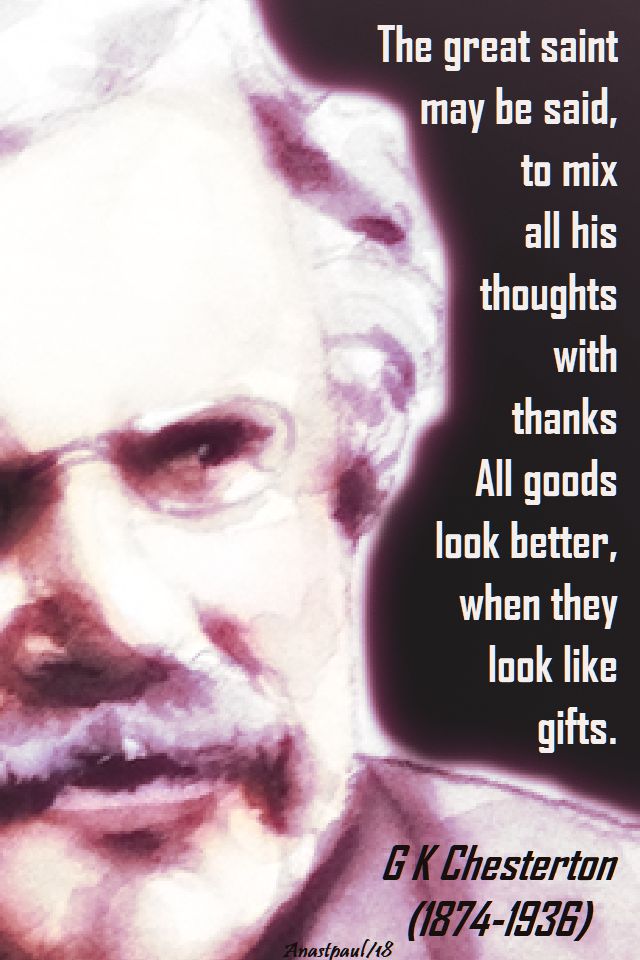 “Enemy-occupied territory –
that is what this world is.
Christianity is the story of how,
the rightful king has landed,
you might say landed in disguise
and is calling us all, to take part,
in a great campaign of sabotage.” 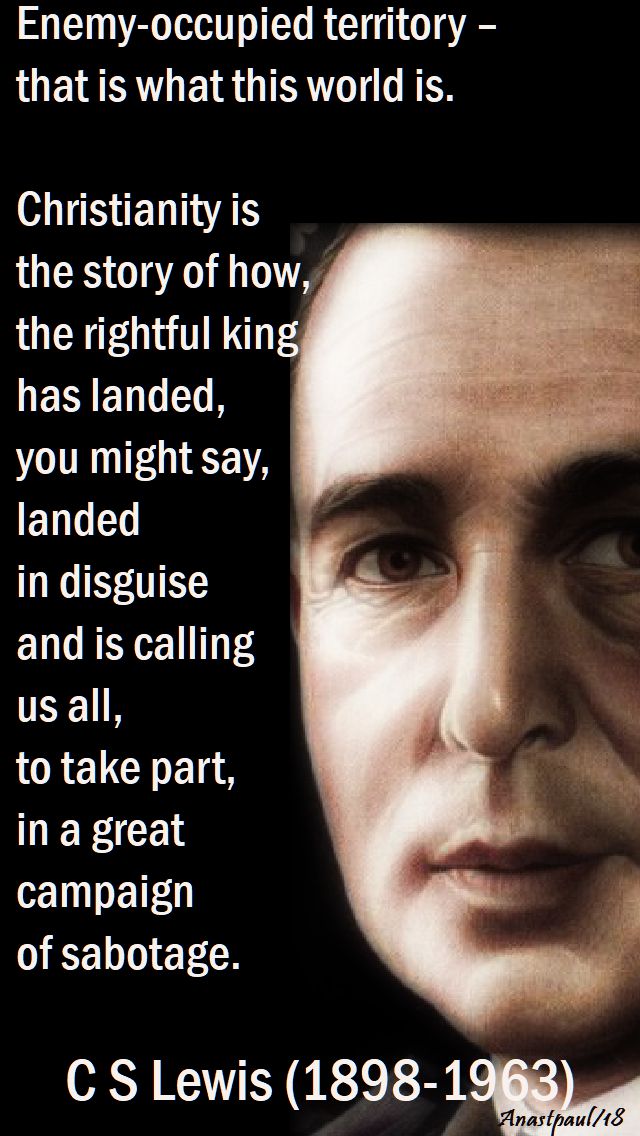 “What people don’t realise,
is how much Christianity costs.
They think faith is a big electric blanket,
when of course, it is the cross.”

“Take courage!
Fix your gaze on our saints.”

“The road to holiness
goes through your neighbour.”

“No one can come to me unless the Father who sent me draws him; and I will raise him up at the last day.   It is written in the prophets, ‘And they shall all be taught by God.’   Every one who has heard and learnt from the Father comes to me.”….John 6:44-45

REFLECTION – “What delights we will find in forgetting self and seeking God!   The Saints renounced themselves in order to seek God and to look for Him alone.   It is in this that we attain heaven.”…St John Vianney

PRAYER – Infinite Lord, You are greater than anything we can imagine.   Help us to forget self and seek only You in Your divine Son, who You sent to teach us and save us.   May we follow Your Son and live in You in all our thoughts, words and actions.   St Pope Leo IX, you sought by your life to follow the Lord, please pray for us.   Through Jesus Christ, our Lord, in the unity of the Holy Spirit, one God forever amen.

O Lord,
grant us that love
which can never die,
which will enkindle our lamps
but not extinguish them,
so that they may shine in us
and bring light to others.
Most dear Saviour,
enkindle our lamps
that they may shine
forever in Your temple.
May we receive
unquenchable light
from You,
so that our darkness
will be illuminated
and the darkness of the world
will be made less.
Amen

St Leo was born to Count Hugh and Heilwig and was a native of Eguisheim, Upper Alsace (present day Alsace, France).   His family was of noble rank and his father, Count Hugh, was a cousin of Emperor Conrad II (1024–1039).   He was educated at Toul, where he successively became canon and, in 1026, bishop – he administered the Diocese of Toul for twenty years.   In the latter capacity he rendered important political services to his relative Conrad II, and afterwards to Emperor Henry III.    He became widely known as an earnest and reforming ecclesiastic.

When the German Pope Damasus II died in 1048, Bishop Bruno was selected by the emperor, Henry III, to succeed him.   Bruno agreed to go to Rome and to accept the papacy if freely elected thereto by the Roman people.   He wished, at least, to rescue the See of Peter from its servitude to the German emperors.   When, in company with Hildebrand he reached Rome and presented himself to its people clad in pilgrim’s guise and barefooted but still tall and fair to look upon, they cried out with one voice that him and no other would they have as pope.   Assuming the name of Leo, he was solemnly enthroned 12 February, 1049. 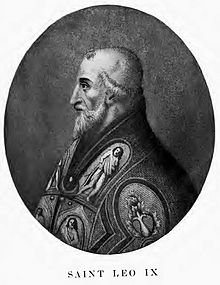 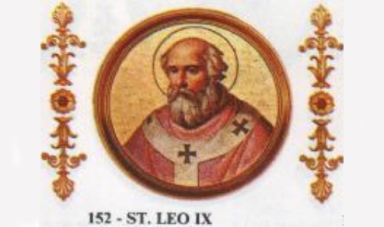 One of his first public acts was to hold the well-known Easter synod of 1049, at which celibacy of the clergy (down to the rank of subdeacon) was required anew.   Also, the Easter synod was where the Pope at least succeeded in making clear his own convictions against every kind of simony.   The greater part of the year that followed was occupied in one of those progresses through Italy, Germany and France which form a marked feature in Leo IX’s pontificate.   Leo chose a body of capable and reform-minded advisers from outside the Roman Curia:  Hildebrand, who was to become Pope St Gregory VII; Frederick of Liege, who was to become Pope Stephen IX;  and Humbert of Moyenmoutier.   He also took advice from reformers such as St Hugh of Cluny and St Peter Damian.

ileoixs001p1
Pope Leo did not just write letters or give sermons to announce his reforms.   He travelled to major dioceses to conduct meetings and discuss why the reforms were necessary.   He travelled so much that he was nicknamed the “Apostolic Pilgrim.”   Leo also appointed men who believed in the reforms to important Church positions.   Leo knew that the changes he wanted would not be accomplished in his lifetime.   He trusted the men he appointed to carry out the needed reforms and they did.