Not only the Nativity, a central point of Christ’s love for humanity but also the vision of the Crucified One inspired in Anthony thoughts of gratitude to God and esteem for the dignity of the human person, so that all believers and non-believers might find in the Crucified One and in His image a life-enriching meaning.

St Anthony writes:  “Christ, who is your life, is hanging before you, so that you may look at the Cross, as in a mirror.   There you will be able to know, how mortal were your wounds, that no medicine other, than the Blood of the Son of God, could heal.  If you look closely, you will be able to realise, how great your human dignity and your value are…. Nowhere other than looking at himself, in the mirror of the Cross, can man better understand how much he is worth”   (Sermones Dominicales et Festivi III, pp. 213-214).

In meditating on these words we are better able to understand the importance of the image of the Crucified One for our culture, for our humanity that is born from the Christian faith.   Precisely by looking at the Crucified One we see, as St Anthony says, how great are the dignity and worth of the human being.   At no other point can we understand how much the human person is worth, precisely because God makes us so important, considers us so important that, in his opinion, we are worthy of his suffering; thus all human dignity appears in the mirror of the Crucified One and our gazing upon him is ever a source of acknowledgement of human dignity…..Pope Benedict XVI (General Audience – February 10, 2010)

St Anthony of Padua, pray for us! 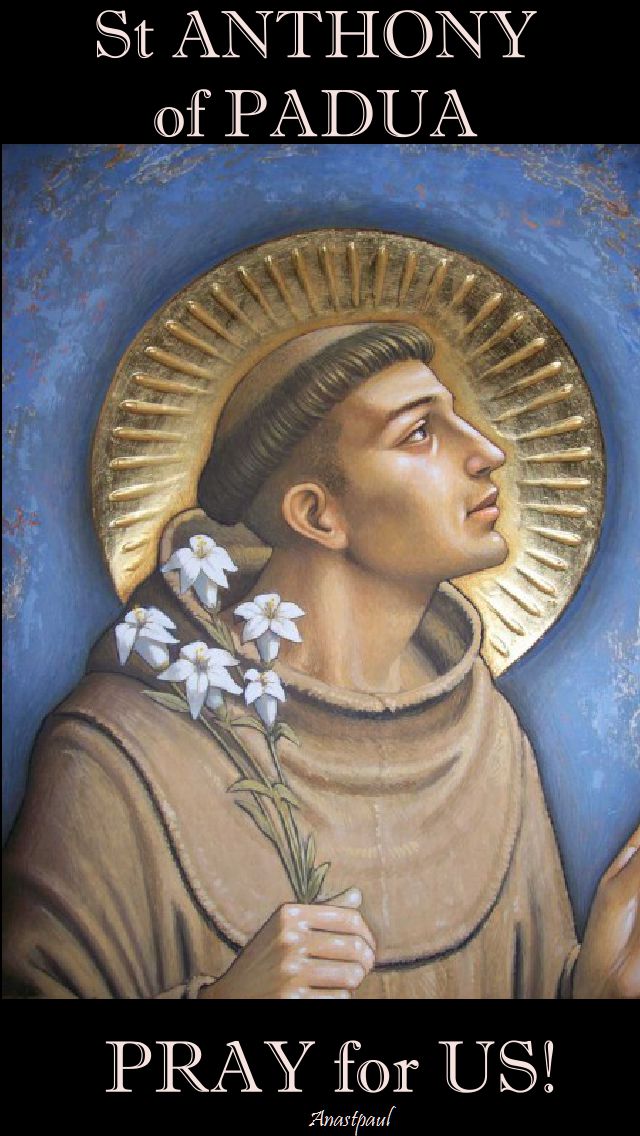 “He who is the beginning and the end,
the ruler of the angels,
made Himself obedient to human creatures.
The creator of the heavens obeys a carpenter;
the God of eternal glory listens to a poor virgin.
Has anyone ever witnessed anything comparable to this?
Let the philosopher no longer disdain from listening
to the common labourer;
the wise, to the simple;
the educated, to the illiterate;
a child of a prince, to a peasant.”

“Christians must lean on the Cross of Christ
just as travelers lean on a staff
when they begin a long journey.” 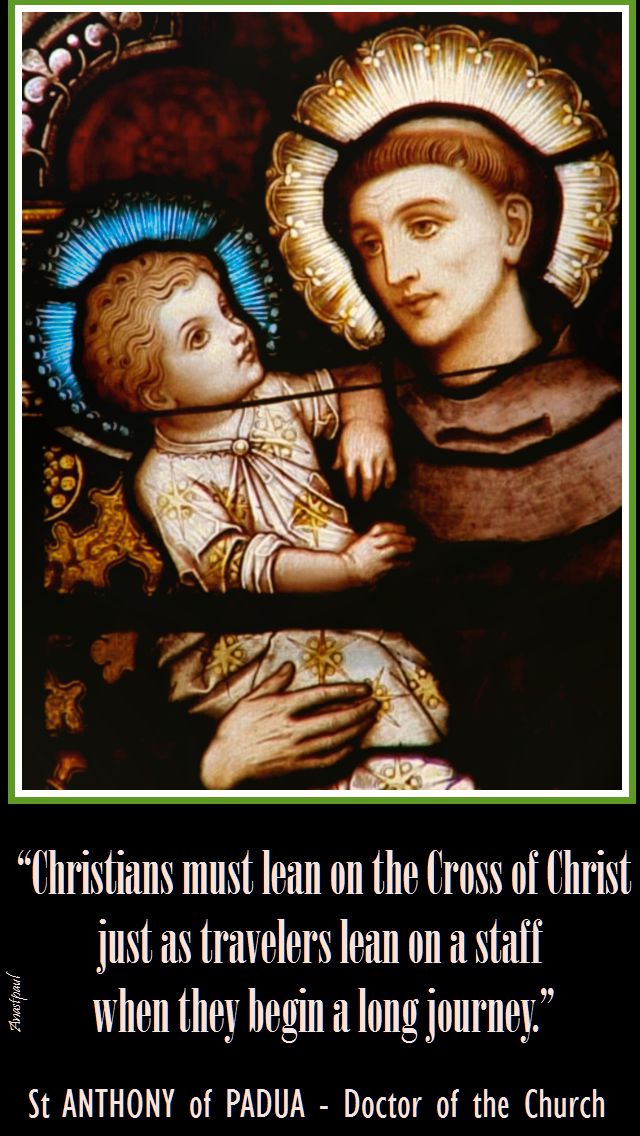 “Earthly riches are like the reed.
Its roots are sunk in the swamp
and its exterior is fair to behold –
but inside it is hollow.
If a man leans on such a reed,
it will snap off and pierce his soul.”

“The devil is afraid of us
when we pray and make sacrifices.
He is also afraid when we are humble and good.
He is especially afraid when we love Jesus very much.
He runs away when we make the Sign of the Cross.” 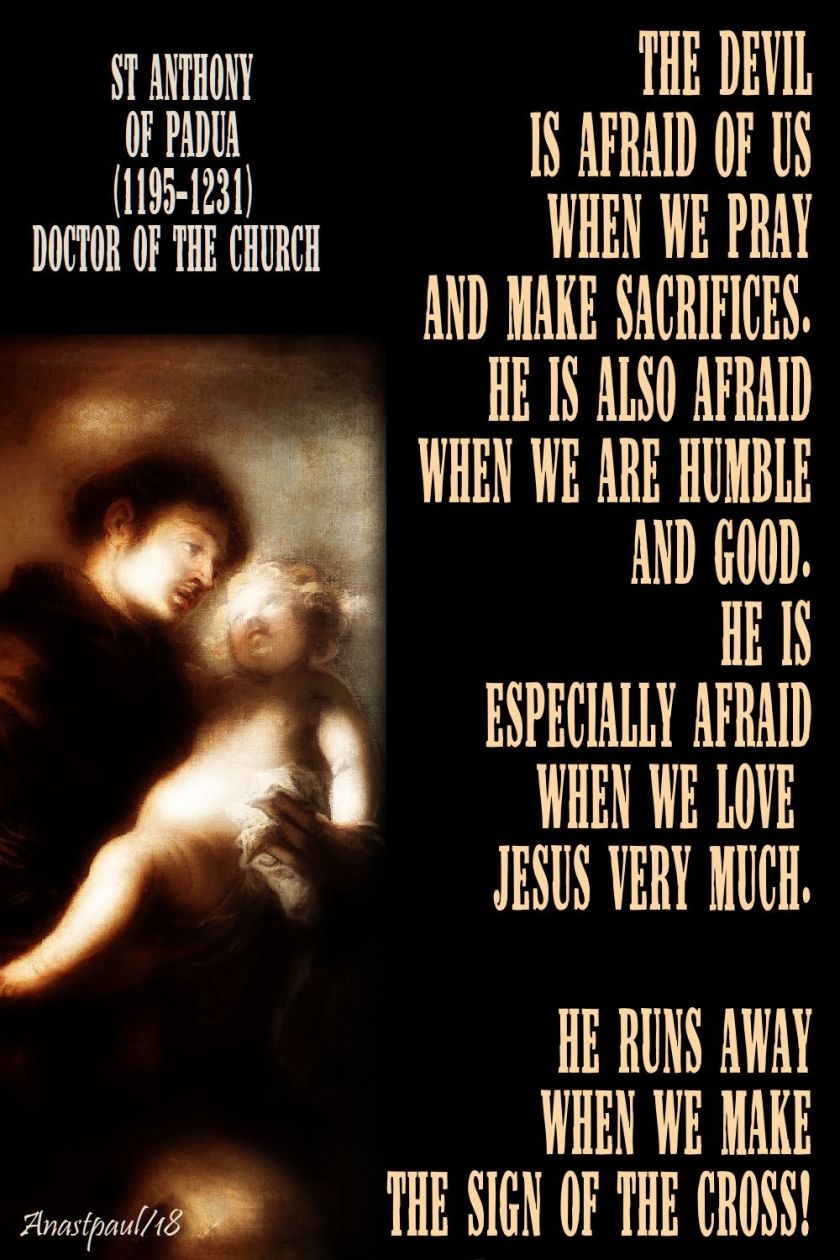 “Actions speak louder than words;
let your words teach
and your actions speak.”

“Charity is the soul of faith,
makes it alive;
without love, faith dies.” 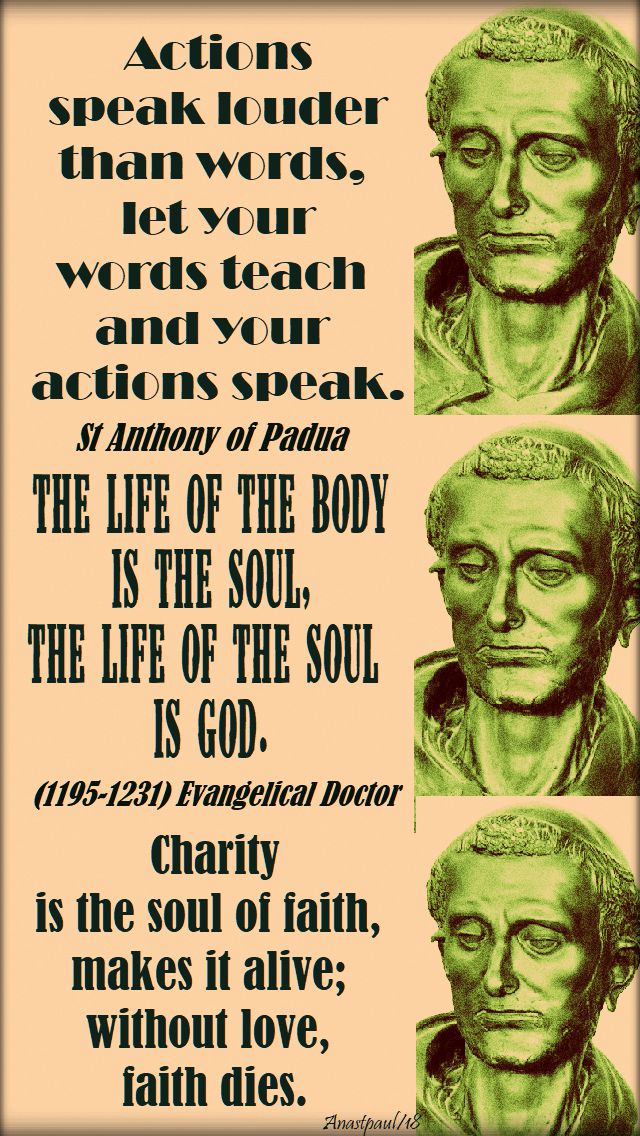 “Damned money!
Alas! …
Money is the ‘droppings of birds’
that blinded the eyes of Tobit.”

Do nothing out of selfishness or out of vainglory; rather, humbly regard others as more important than yourselves…Phil 2:3

REFLECTION – “The spirit of humility is sweeter than honey, and those who nourish themselves with this honey produce sweet fruit.”…St Anthony of Padua 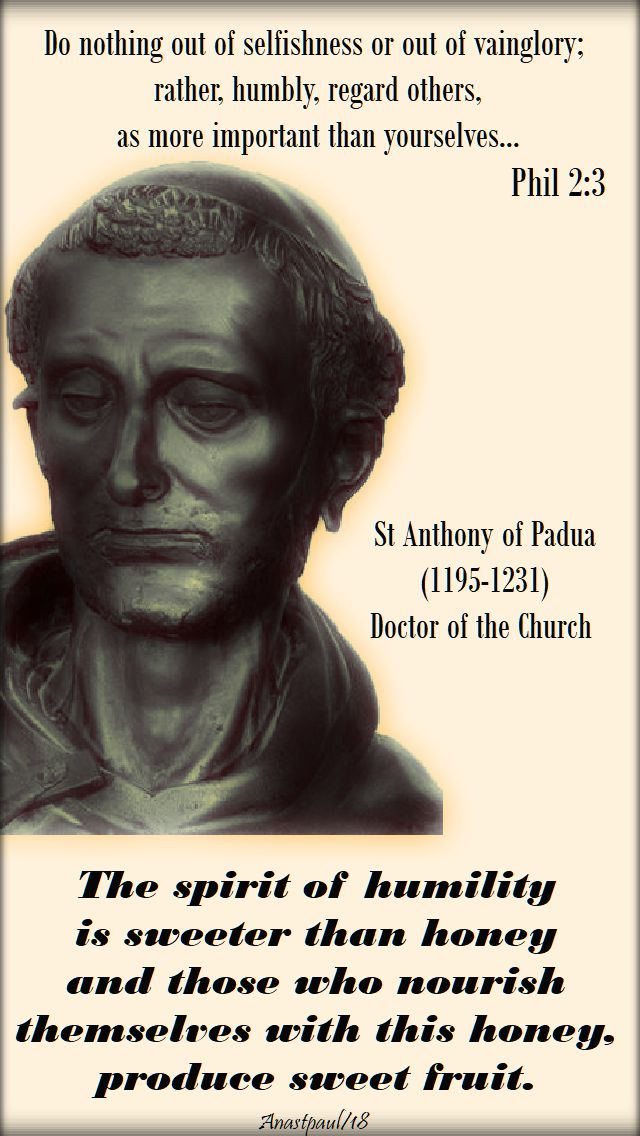 PRAYER – Almighty, everliving God, You gave St Anthony of Padua to Your people as a preacher and teacher and a patron in their needs. Grant that we may learn from his words inspired by Your Holy Spirit and by his prayers, grow in faith, hope and humility. We make our prayer through Christ our Lord, amen. 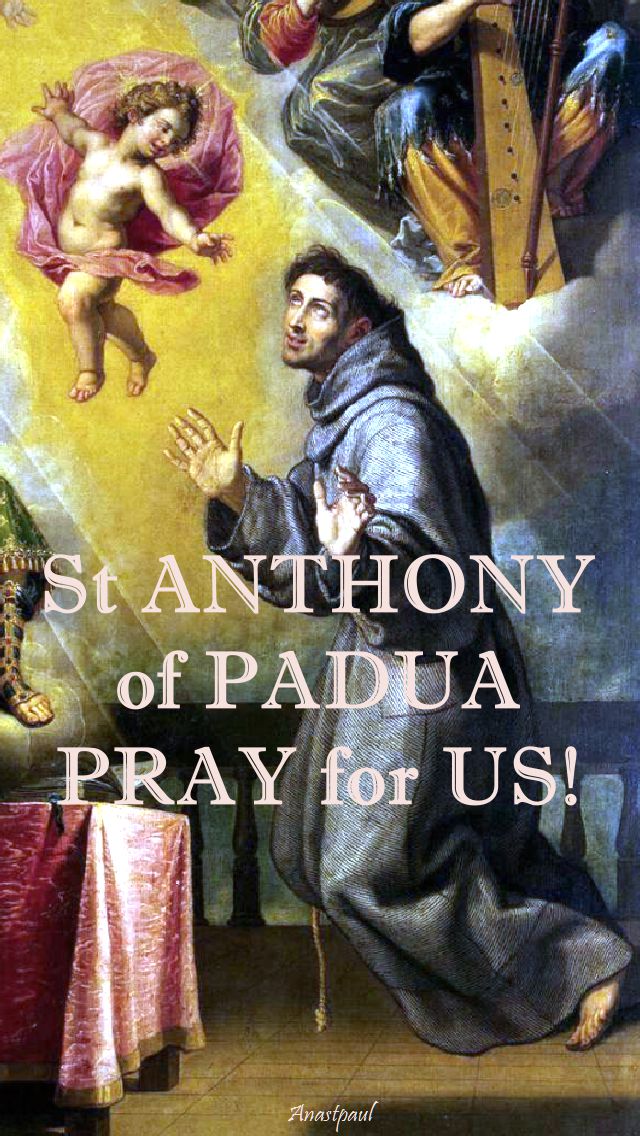 O God,
send forth Your Holy Spirit
into my heart
that I may perceive,
into my mind,
that I may remember,
and into my soul,
that I may meditate.
Inspire me to speak
with piety,
holiness,
tenderness
and mercy.
Teach, guide and direct my thoughts
and senses, from beginning to end.
May Your grace,
ever help and correct me,
and may I be strengthened now
with wisdom from on high,
for the sake of Your infinite mercy.
Amen

St Anthony of Padua is one of the most famous disciples of St Francis of Assisi.   He was a famous preacher and worker of miracles in his own day and throughout the eight centuries since his death, he has so generously come to the assistance of the faithful who invoke him, that he is known throughout the world amongst many who are not Catholics too.

The gospel call to leave everything and follow Christ was the rule of Anthony’s life.   Over and over again, God called him to something new in his plan.   Every time Anthony responded with renewed zeal and self-sacrifice to serve his Lord Jesus more completely.

His journey as the servant of God began as a very young man when he decided to join the Augustinians in Lisbon, giving up a future of wealth and power to be a servant of God.   Later when the bodies of the first Franciscan martyrs went through the Portuguese city where he was stationed, he was again filled with an intense longing to be one of those closest to Jesus himself: those who die for the Good News.

So Anthony entered the Franciscan Order and set out to preach to the Moors.   But an illness prevented him from achieving that goal.

He went to Italy and was stationed in a small hermitage where he spent most of his time praying, reading the Scriptures and doing menial tasks.

The call of God came again at an ordination where no one was prepared to speak.   The humble and obedient Anthony hesitantly accepted the task.   The years of searching for Jesus in prayer, of reading sacred Scripture and of serving him in poverty, chastity and obedience had prepared Anthony to allow the Spirit to use his talents.   Anthony’s sermon was astounding to those who expected an unprepared speech and knew not the Spirit’s power to give people words.

Recognised as a great man of prayer and a great Scripture and theology scholar, Anthony became the first friar to teach theology to the other friars.   Soon he was called from that post to preach to the Albigensians in France, using his profound knowledge of Scripture and theology to convert and reassure those who had been misled by their denial of Christ’s divinity and of the sacraments.. 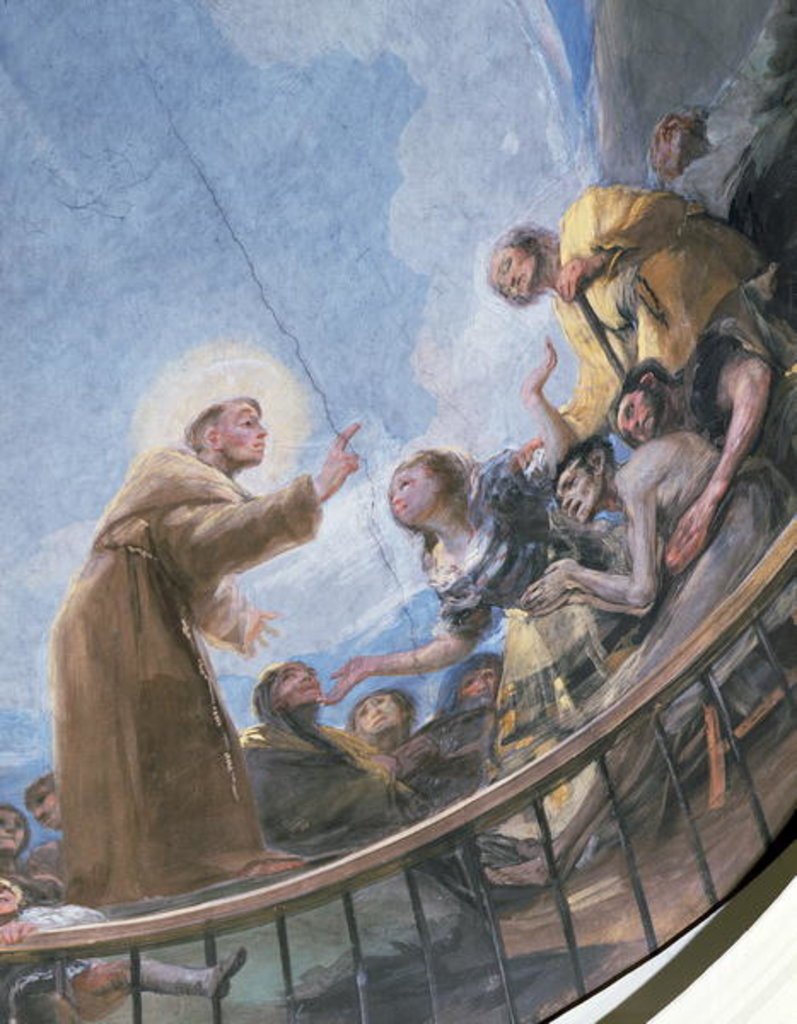 The number of those who came to hear him was sometimes so great that no church was large enough to accommodate and so he had to preach in the open air.   Frequently St Anthony wrought veritable miracles of conversion.   Deadly enemies were reconciled. Thieves and usurers made restitution.   Calumniators and detractors recanted and apologised.   He was so energetic in defending the truths of the Catholic Faith that many heretics returned to the Church.   This occasioned the epitaph given him by Pope Gregory IX “the ark of the covenant.”

In all his labours he never forgot the admonition of his spiritual father, St Francis, that the spirit of prayer must not be extinguished.   If he spent the day in teaching and heard the confession of sinners till late in the evening, then many hours of the night were spent in intimate union with God before the Blessed Sacrament.

After he led the friars in northern Italy for three years, he made his headquarters in the city of Padua.   He resumed his preaching and began writing sermon notes to help other preachers.   In the spring of 1231 Anthony withdrew to a friary at Camposampiero where he had a sort of treehouse built as a hermitage.   There he prayed and prepared for death.   After receiving the last sacraments he kept looking upward with a smile on his countenance. When he was asked what he saw there, he answered:  “I see my Lord.”   He breathed forth his soul on 13 June 1231 being only thirty six years old.   Soon the children in the streets of the city of Padua were crying:  “The saint is dead, Anthony is dead.”

Once a man, at whose home St Anthony was spending the night, came upon the saint and found him, in ecstasy, holding in his arms the Child Jesus, unspeakably beautiful and surrounded with heavenly light.   For this reason St Anthony is often depicted holding the Child Jesus. 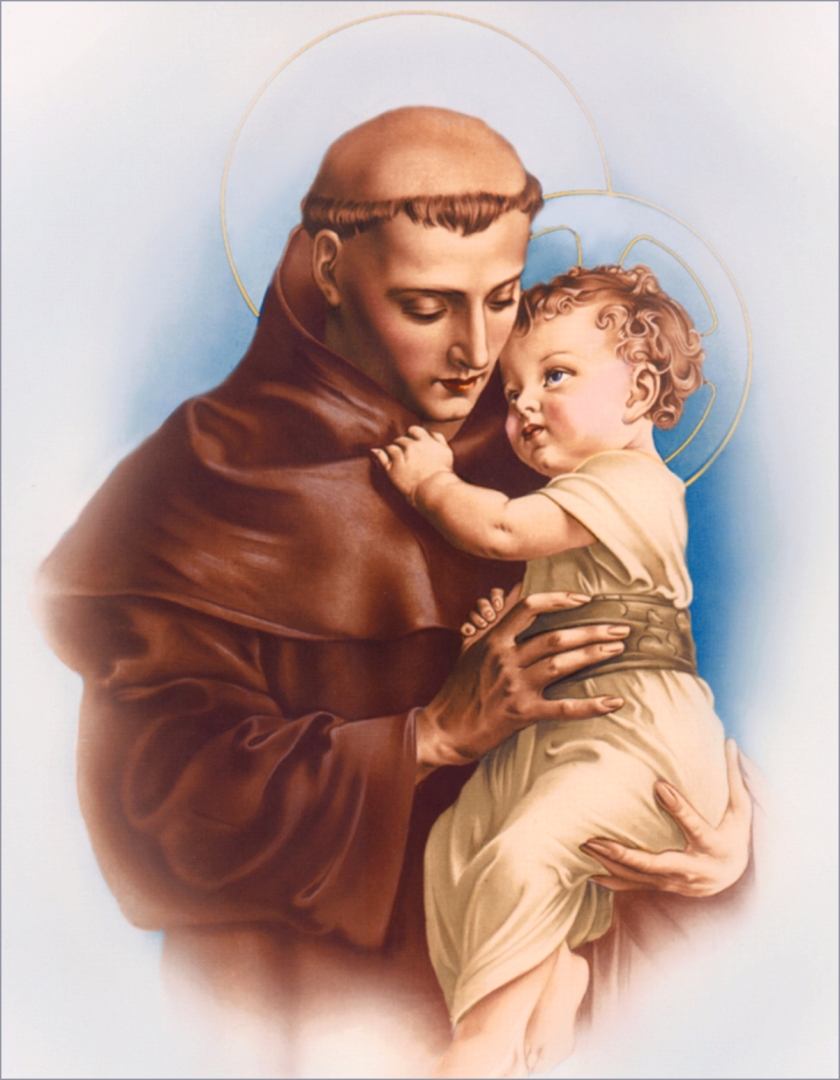 Pope Gregory IX enrolled him among the saints in the very next year.   At Padua, a magnificent basilica was built in his honour, his holy relics were entombed there in 1263.  From the time of his death up to the present day, countless miracles have occurred through St Anthony’s intercession, so that he is known as the Wonder-Worker.   In 1946 St Anthony was declared a Doctor of the Church and titled “The Evangelical Doctor.   For more on St Anthony, including why he is invoked for the finding of lost articles, here:  https://anastpaul.wordpress.com/2017/06/13/saint-of-the-day-13-june-st-anthony-of-paduao-f-m-evangelical-doctor-hammer-of-heretics-professor-of-miracles-wonder-worker-ark-of-the-covenant/

Bl Gerard of Clairvaux – was the brother of Saint Bernard of Clairvaux. H e was a Soldier. When he was wounded in combat at the siege of Grancy, Gerard resolved to become a monk. Benedictine Cistercian monk at Citeaux. He worked with Saint Bernard at Clairvaux and became his closest confidant. Cellarer. He died in 1138 of natural causes.