Congratulations, Prayers and Love to Pope Emeritus Benedict XVI on the occasion of the 67th Anniversary of his Priestly Ordination

Most gracious Heavenly Father,
We thank You for our faithful Pope Emeritus Benedict XVI,
whose spiritual fatherhood and example of fidelity,
self-sacrifice, humility and devotion
has been so vital to the faith of Your people
through 67 years of living his role as Your earthly shepherd.
May our spiritual father, who continues his mission for his flock
be always guided by the examples of Saints Peter and Paul,
all the Apostles and their saintly successors.
Give him valiant strength in his twilight years,
hope in times of trouble and sorrow and steadfast love for You,
and for all Your people throughout the world.
May the light of Your Truth continue to shine through him.
We thank You for blessing Pope Emeritus Benedict with his
continued generosity in imparting his knowledge to all Your children.
Bless him and keep him and protect him
and let him know that he is greatly loved and respected.
Our prayers arise to You, our Father for our beloved Pope Benedict
Through Christ, our Lord.
Amen 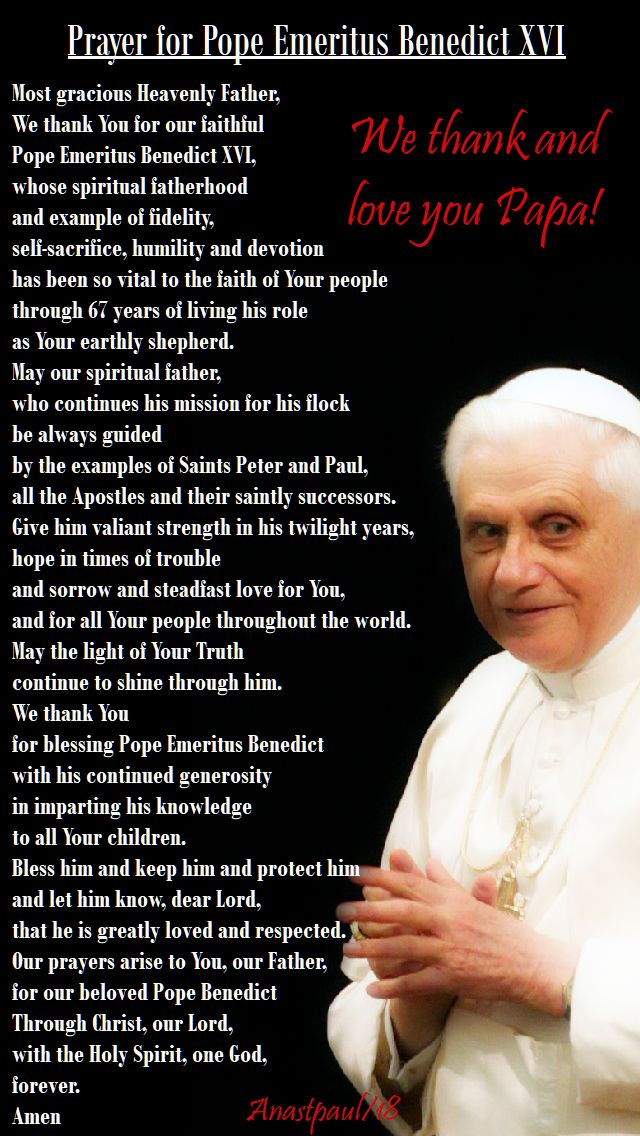 We would probably go to confession to Peter, sooner than to any of the other apostles.  He is perhaps a more striking example of the simple fact of holiness.   Jesus says to us as he said, in effect, to Peter:  “It is not you who have chosen me but I who have chosen you. Peter, it is not human wisdom that makes it possible for you to believe but my Father’s revelation.   I, not you, build my Church.”

Paul’s experience of the risen Jesus on the road to Damascus was the driving force that made him one of the most zealous, dynamic and courageous ambassadors of Christ the Church has ever had.   But persecution, humiliation and weakness became his day-by-day carrying of the cross, material for further transformation.   The dying Christ was in him;  the living Christ was his life.

We owe our faith to these two great Apostles and like Jesus, Himself, their death was our life!

St Peter, the foundation of our home on earth, incomparable St Paul, “the chosen vessel”, you were partners in death and share the glorious crown.   You are both lamps to guide our feet, lights and jewels of the Universal Church, please Pray for us! 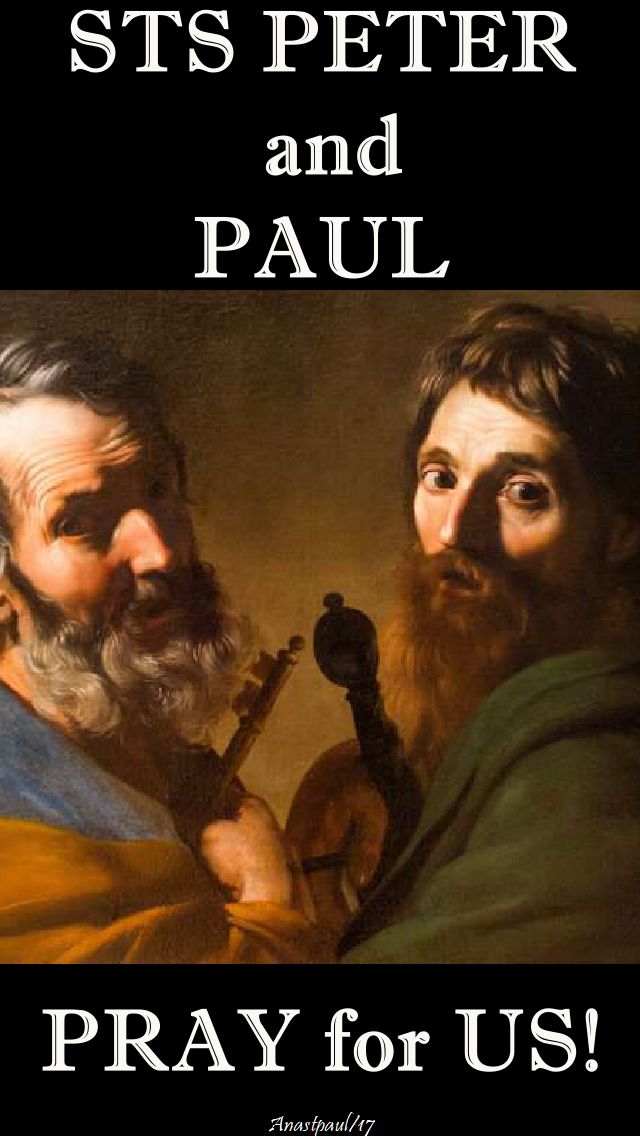 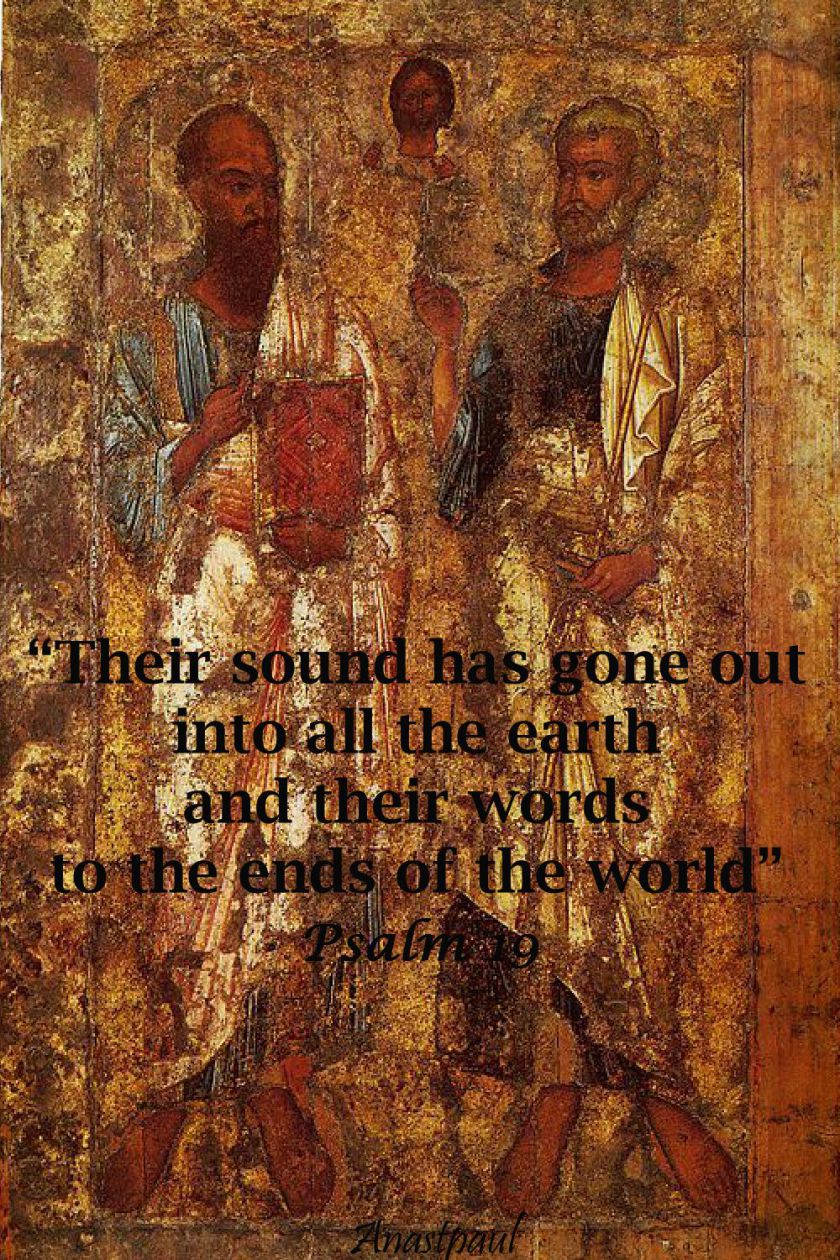 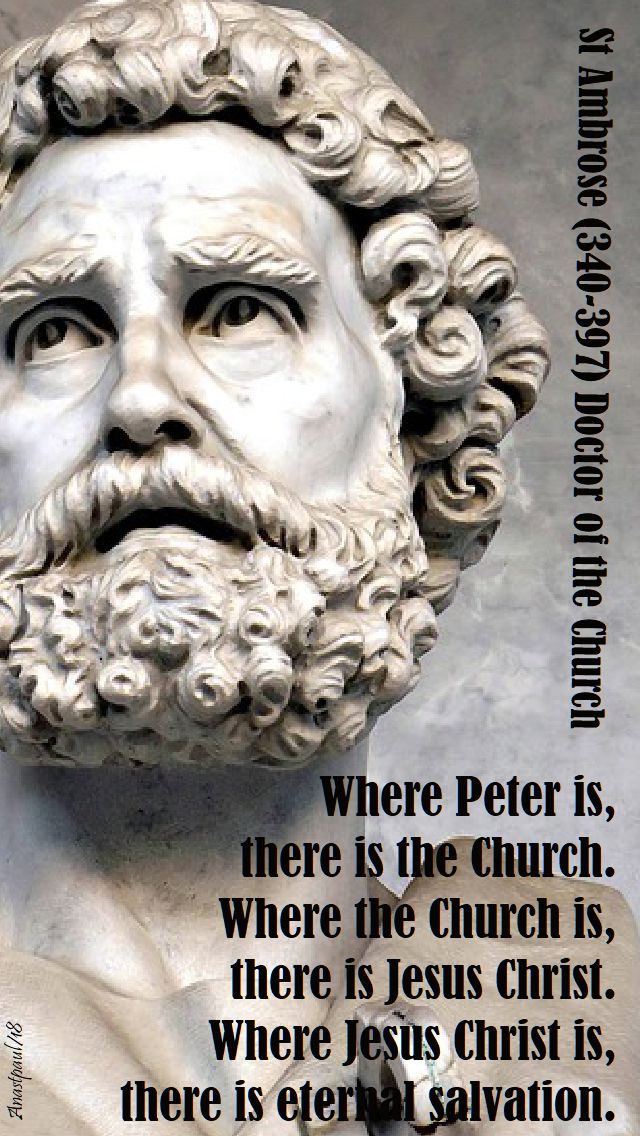 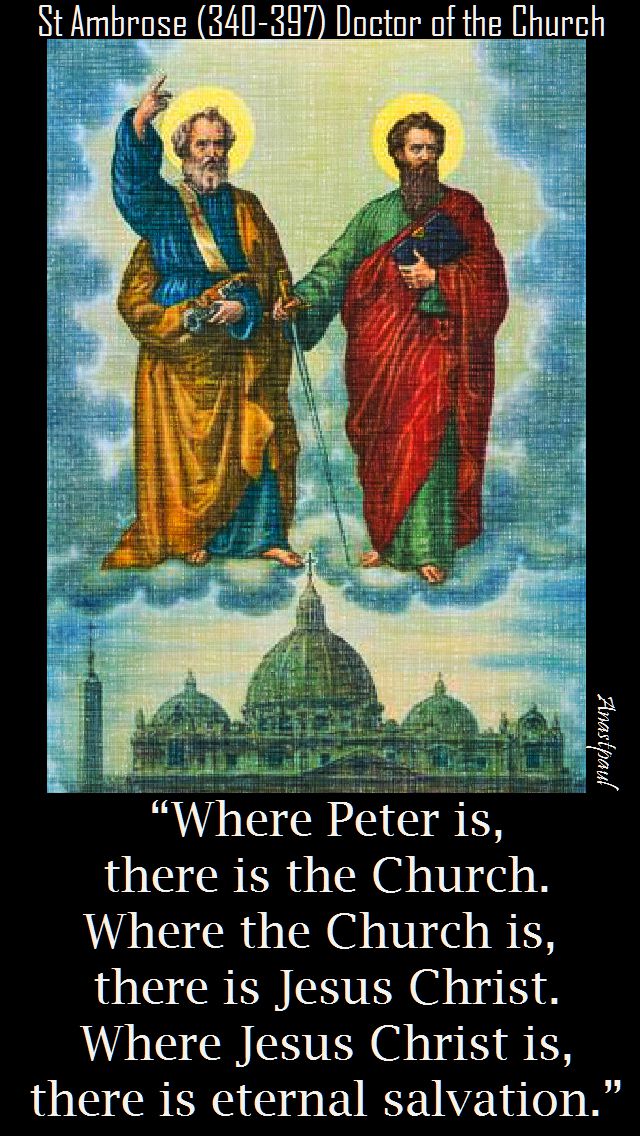 “There is one day for the passion of two apostles.
But these two also were as one;
although they suffered on different days, they were as one.
Peter went first, Paul followed.
We are celebrating a feast day, consecrated for us by the blood of the apostles.
Let us love their faith, their lives, their labours,
their sufferings, their confession of faith, their preaching.” 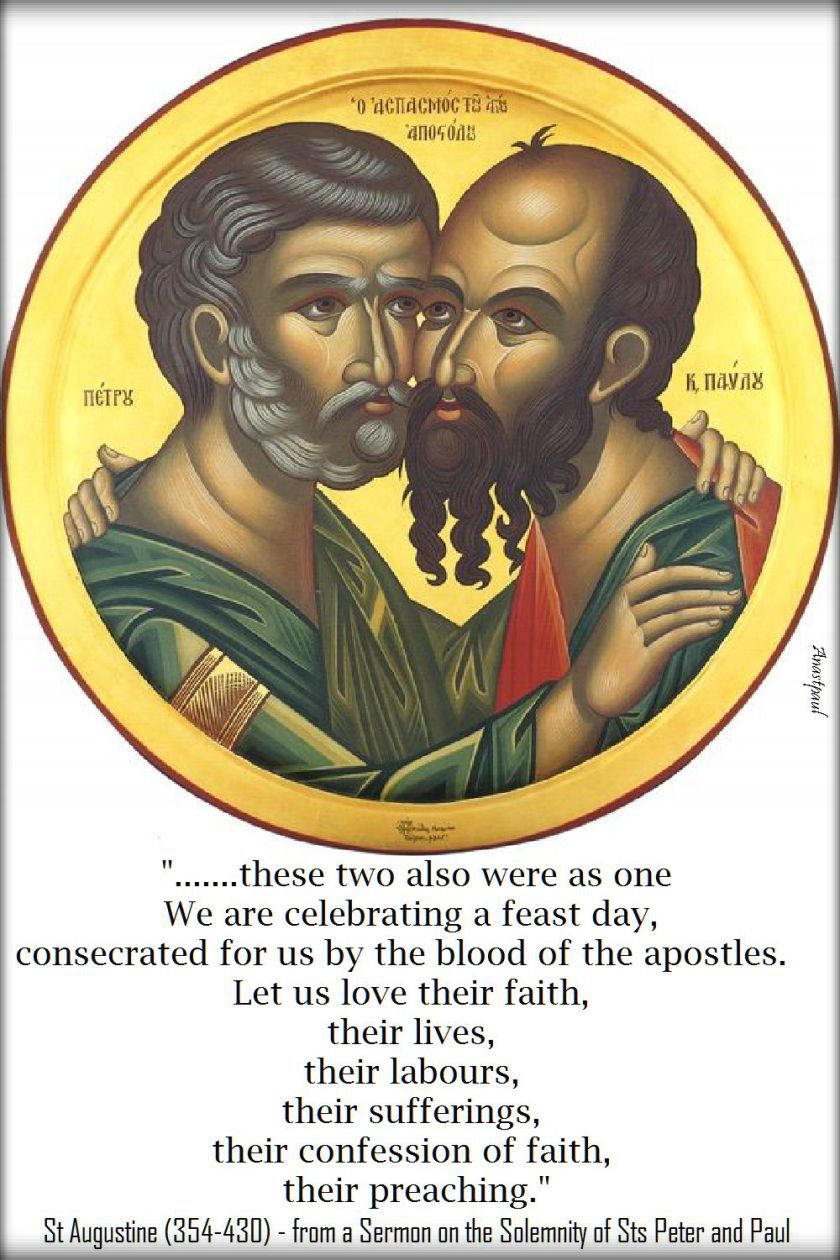 “There must be general rejoicing, dearly beloved,
over this holy company whom God has appointed
for our example in patience and for our confirmation in faith.
But we must glory even more in the excellence of their fathers,
Peter and Paul, whom the grace of God has raised
to such a height among all the members of the Church
that He has set them like twin lights
of eyes in that Body whose head is Christ.” 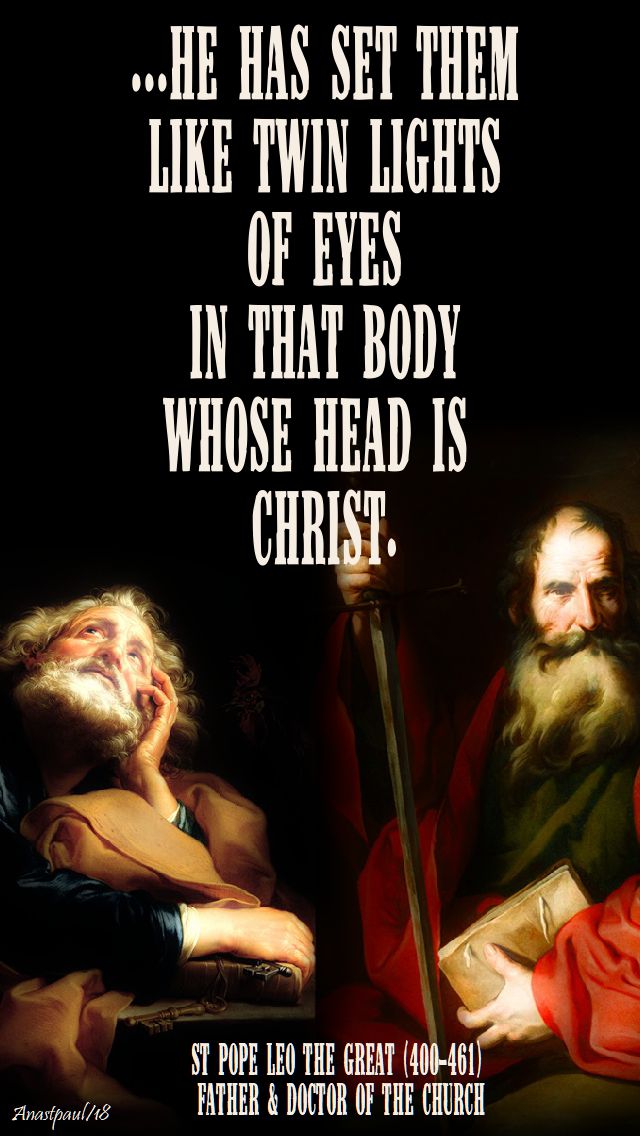 Today the Lord repeats to me, to you…: Follow Me!
Waste no time in questioning or in useless chattering;
do not dwell on secondary things but look to what is essential and follow Me.
Follow Me without regard for the difficulties.
Follow Me in preaching the Gospel.
Follow Me by the witness of a life shaped by the grace you received in baptism….. and holy orders.
Follow Me by speaking of Me, to those with whom you live, day after day,
in your work, your conversations and among your friends.
Follow Me by proclaiming the Gospel to all, especially to the least among us,
so that no one will fail to hear the word of life,
which sets us free from every fear
and enables us to trust in the faithfulness of God.
Follow Me! 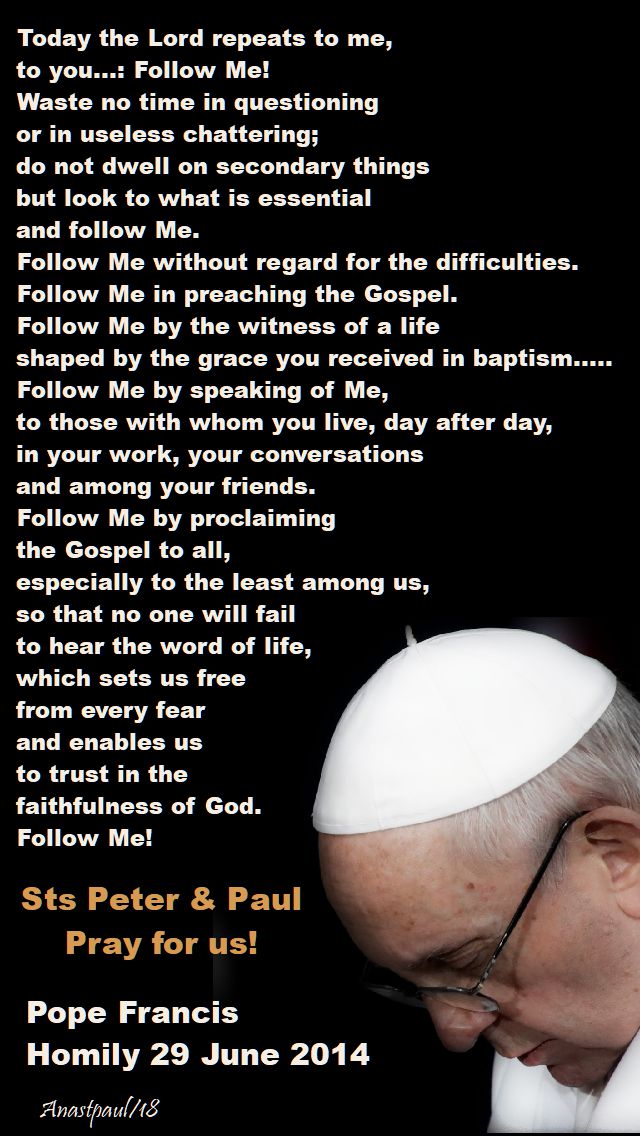 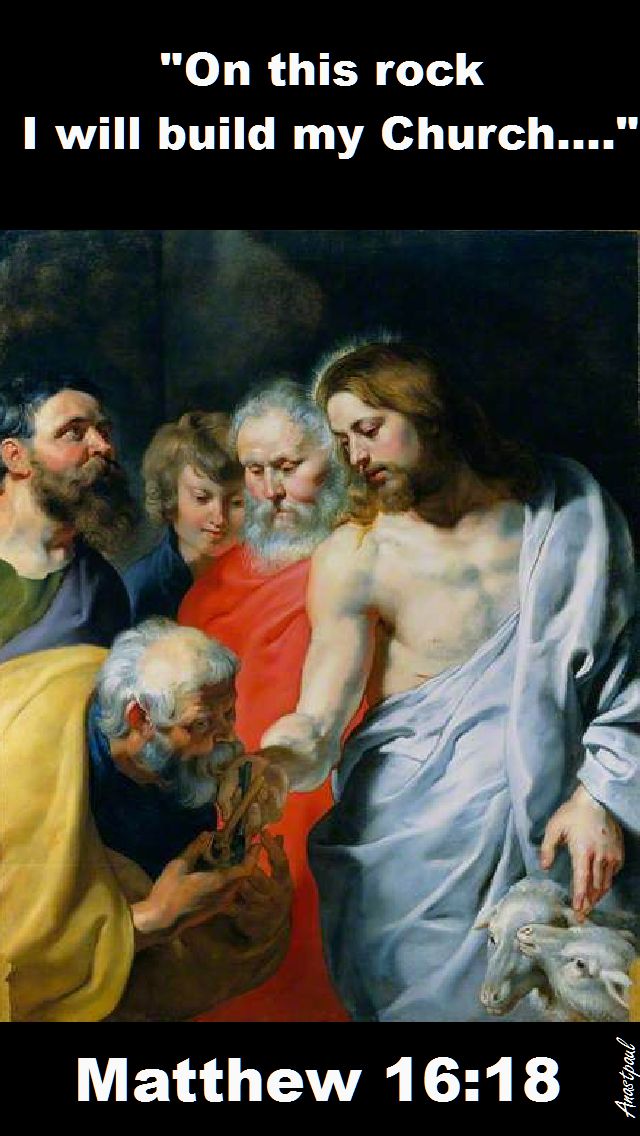 REFLECTION – “And so it is with Rome, where the holy Apostles Peter and Paul, gave with their blood their final witness.   The vocation of Rome is of apostolic origin and the ministry which it is our lot to exercise here, is a service for the benefit of the entire Church and of mankind.   But it is an irreplaceable service, because it has pleased the Wisdom of God to place the Rome of Peter and Paul, so to speak, on the road that leads to the eternal City, by the fact that Wisdom chose to confide to Peter—who unifies in himself the College of Bishops—the keys of the kingdom of heaven.   What remains here, not through the effect of man’s will but through the free and merciful benevolence of the Father and the son and the Holy Spirit, is the soliditas Petri, such as our predecessor Saint Leo the Great extolled in unforgettable terms:   “Saint Peter does not cease to preside over his See and preserves an endless sharing, with the Sovereign Priest.   The firmness that he received from the Rock which is Christ, he himself, having become the Rock, transmits it equally to his successors.”…Blessed Pope Paul VI (1897-1978) – Exhortation on Christian Joy, 1975 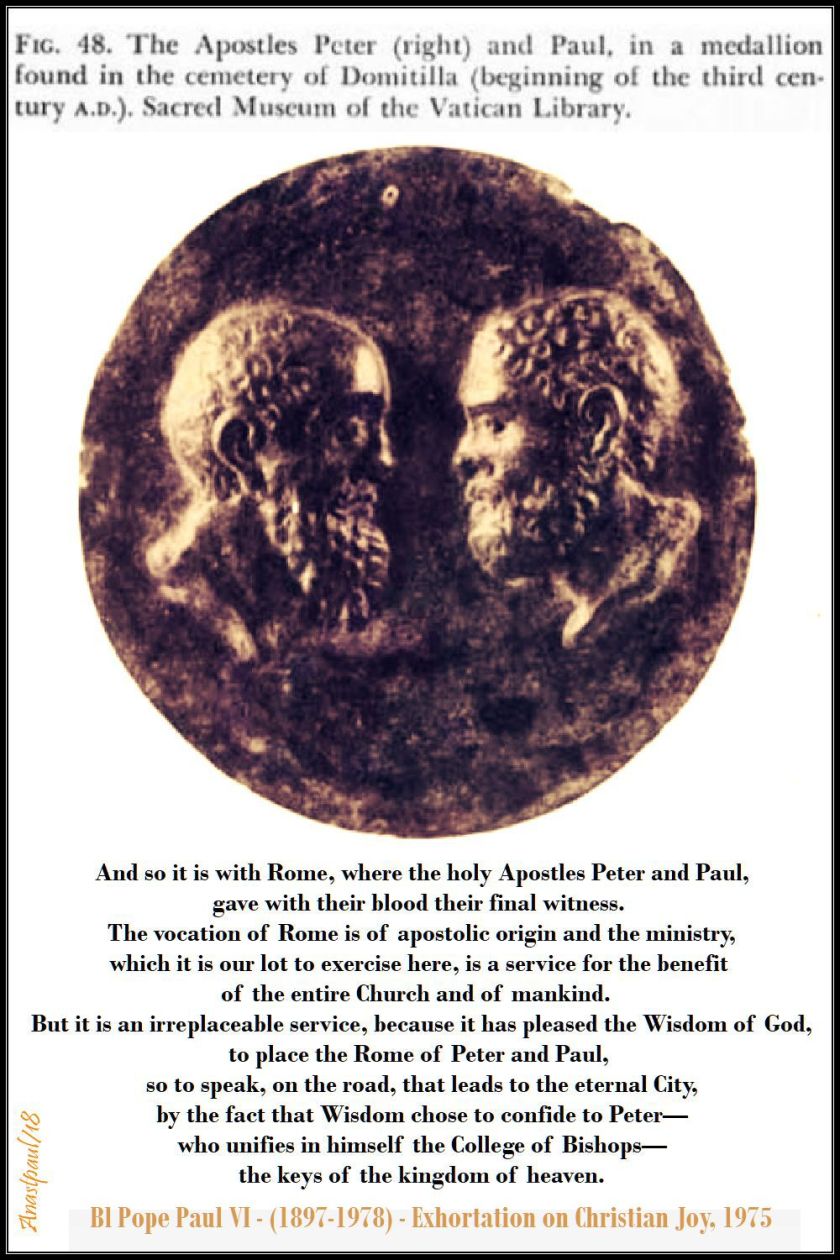 PRAYER – Lord our God, You give us the great joy of devoting this day to the honour of the apostles Peter and Paul.   Provide us, by their intercession, with help for our eternal salvation.   Grant that Your Church may follow their teaching to the full, because these are the men who first taught us to worship You in Christ, Your Son, who lives and reigns with You and the Holy Spirit, one God forever, amen. 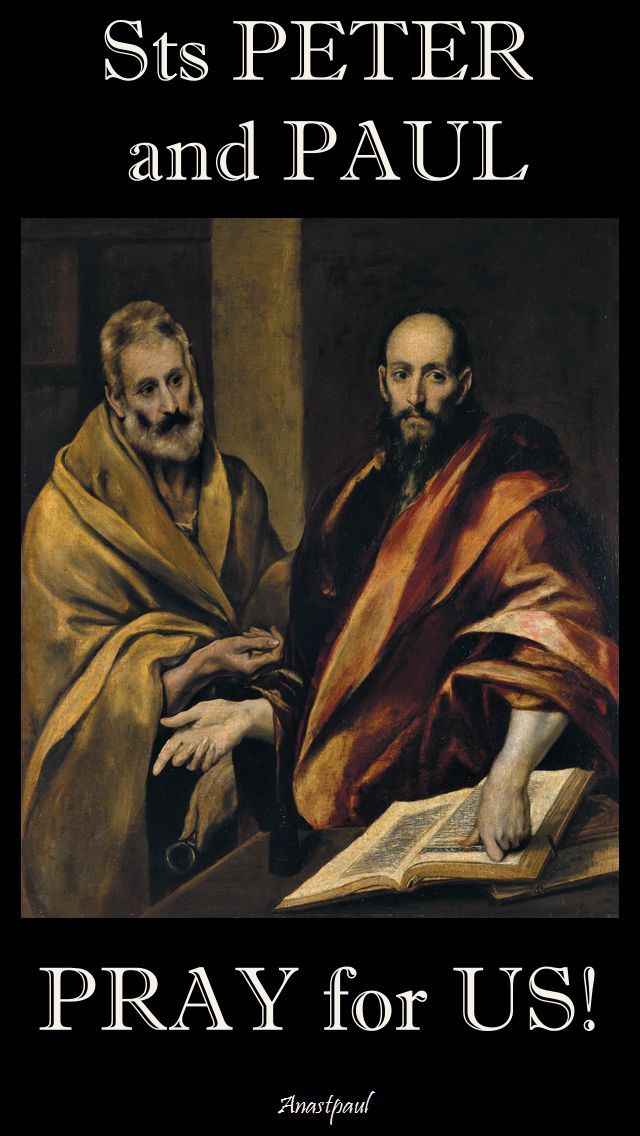 What fairer light is this than time itself doth own,
The golden day with beams more radiant brightening?
The princes of God’s Church this feast day doth enthrone,
To sinners heavenward bound their burden lightening.

One taught mankind its creed, one guards the heavenly gate,
Founders of Rome, they bind the world in loyalty;
One by the sword achieved, one by the cross his fate;
With laurelled brows they hold eternal royalty.

Rejoice, O Rome, this day, thy walls they once did sign
With princely blood, who now their glory share with thee.
What city’s vesture glows with crimson deep as thine?
What beauty else has earth that may compare with thee?

To God the three in one eternal homage be,
All honour, all renown, all songs victorious,
Who rules both heaven and earth by one divine decree
To everlasting years in empire glorious. 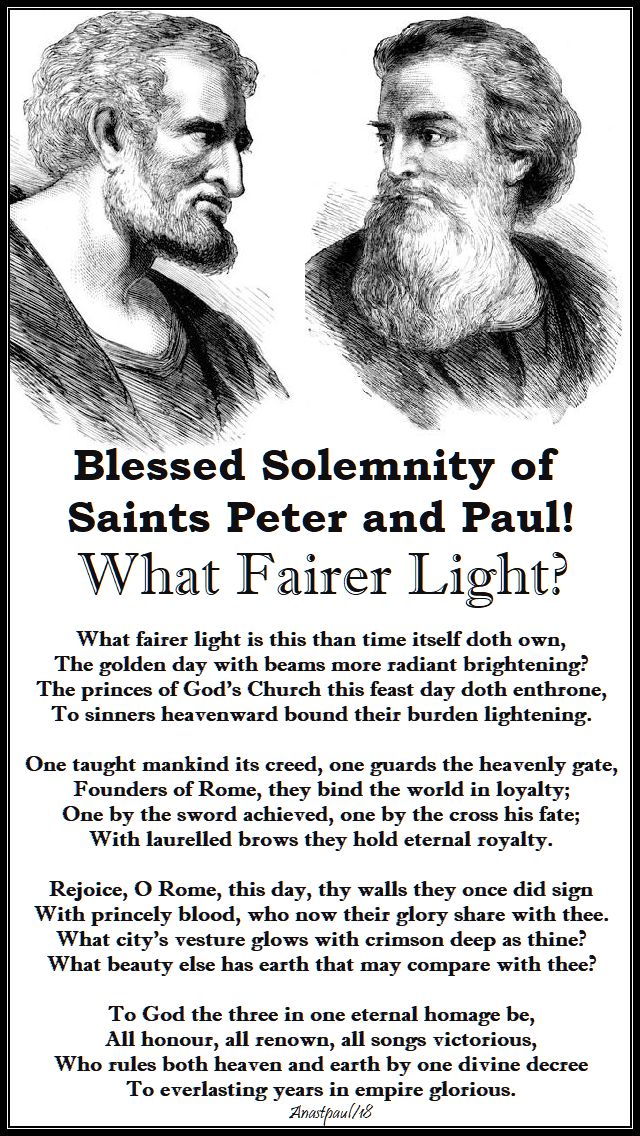 The Solemnity of Saints Peter and Paul
St Augustine (354-430) 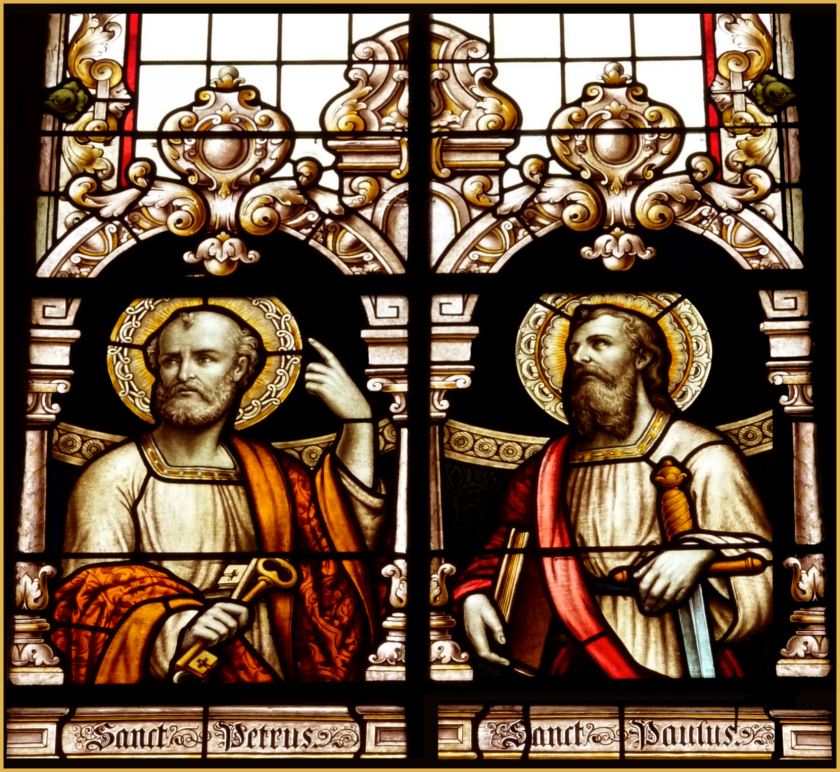 This day has been consecrated for us by the Martyrdom of the blessed apostles Peter and Paul.   It is not some obscure martyrs we are talking about.   “Their sound has gone out into all the earth and their words to the ends of the world” (Psalm 19).   These martyrs had seen what they proclaimed, they pursued justice by confessing the truth, by dying for the truth. 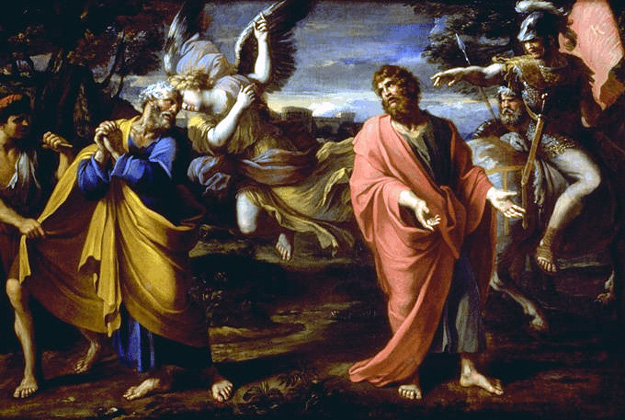 Before His passion the Lord Jesus, as you know, chose those disciples of His whom He called apostles.   Among these it was only Peter who almost everywhere, was given the privilege of representing the whole Church.   It was in the person of the whole Church, which he alone represented, that he was privileged to hear, “To you will I give the keys of the kingdom of heaven.”   After all, it is not just one man that received these keys but the Church in its unity.   So this is the reason for Peter’s acknowledged pre-eminence, that he stood for the Church’s universality and unity, when he was told, “To you I am entrusting,” what has in fact been entrusted to all.   To show you that it is the Church which has received the keys of the kingdom of heaven, listen to what the Lord says in another place to all His apostles:  “Receive the Holy Spirit” and immediately afterwards, “Whose sins you forgive, they will be forgiven them; whose sins you retain, they will be retained” (John 20:22-23).

Quite rightly, too, did the Lord after His resurrection entrust His sheep to Peter to be fed (Jn. 21: 15-19).   It is not, you see, that he alone among the disciples was fit to feed the Lord’s sheep but when Christ speaks to one man, unity is being commended to us.   And He first speaks to Peter, because Peter is the first among the apostles.   Do not be sad, Apostle.  Answer once, answer again, answer a third time.   Let confession conquer three times with love, because self-assurance was conquered three times by fear.   What you had bound three times must be loosed three times.   Loose through love what you had bound through fear.   And for all that, the Lord once and again, and a third time, entrusted His sheep to Peter. 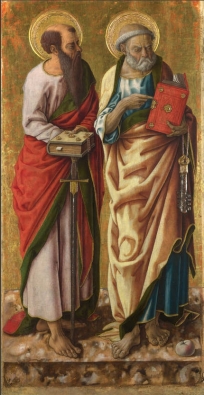 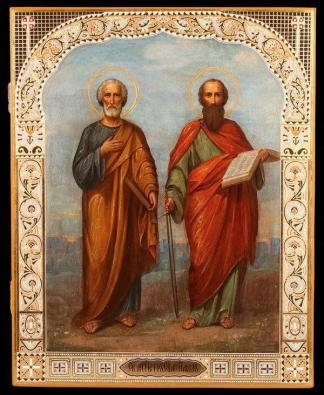 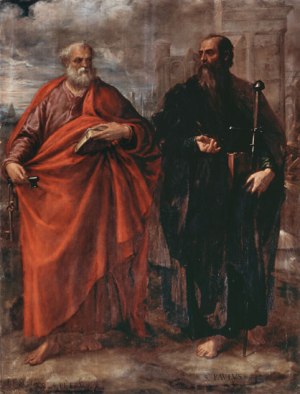 There is one day for the passion of two apostles.   But these two also were as one; although they suffered on different days, they were as one.   Peter went first, Paul followed.

We are celebrating a feast day, consecrated for us by the blood of the apostles.  Let us love their faith, their lives, their labours, their sufferings, their confession of faith, their preaching.

O God, who on the Solemnity of the Apostles Peter and Paul
give us the noble and holy joy of this day,
grant, we pray, that Your Church
may in all things follow the teaching
of those through whom she received
the beginnings of right religion.
Through our Lord Jesus Christ, Your Son,
who lives and reigns with You in the unity of the Holy Spirit,
one God, forever and ever.
Amen 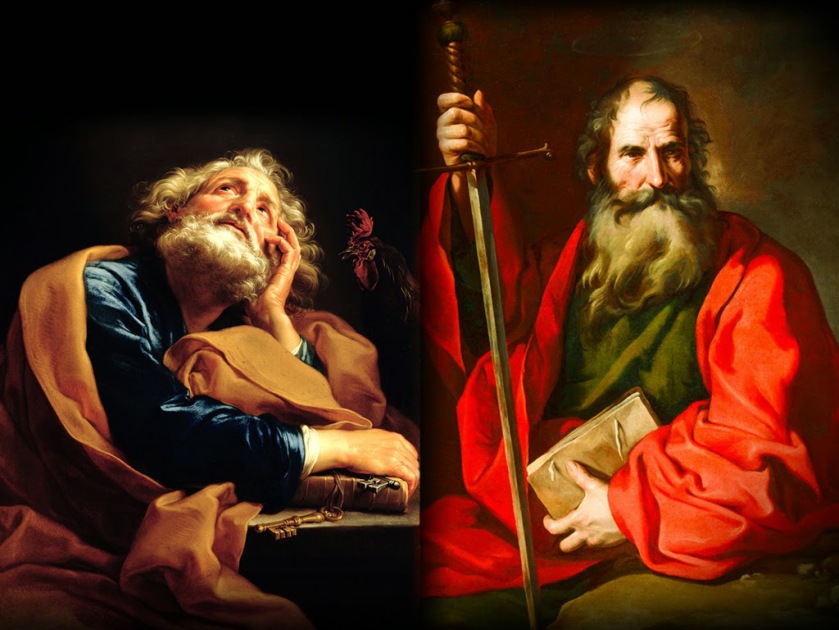 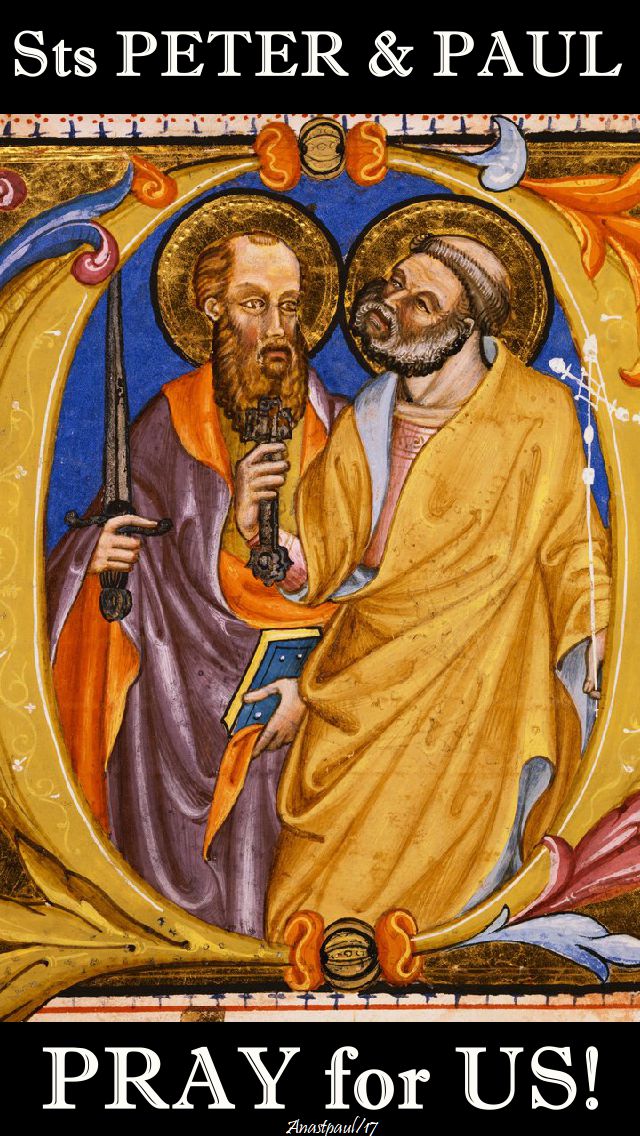