Today, 6 November, the Church celebrates the feast of St Jean Théophane Vénard, a French missionary to Vietnam who was martyred for the faith.

Famous for having inspired St Therese of Lisieux, who said of St Théophane that he was someone who had lived her own image of a martyr and missionary, St Théophane was born in France, became a priest in the Society of Foreign Missions and was sent to Vietnam.

It was during his incarceration that he wrote many letters, some to his family. His most famous line is from a letter to his father in which he said, “We are all flowers planted on this earth, which God plucks in His own good time – some a little sooner, some a little later . . . Father and son, may we meet in Paradise. I, poor little moth, go first. Adieu.”

In reading these letters, St Therese the Little Flower came to understand and use the image of being a little flower, whom God nevertheless cared for and cultivated, despite her minute size.

His severed head was later recovered and is preserved as a relic in Vietnam. The rest of his body rests in the crypt of the Missions Etrangères in Paris.

St Théophane Vénard, Pray for Us! 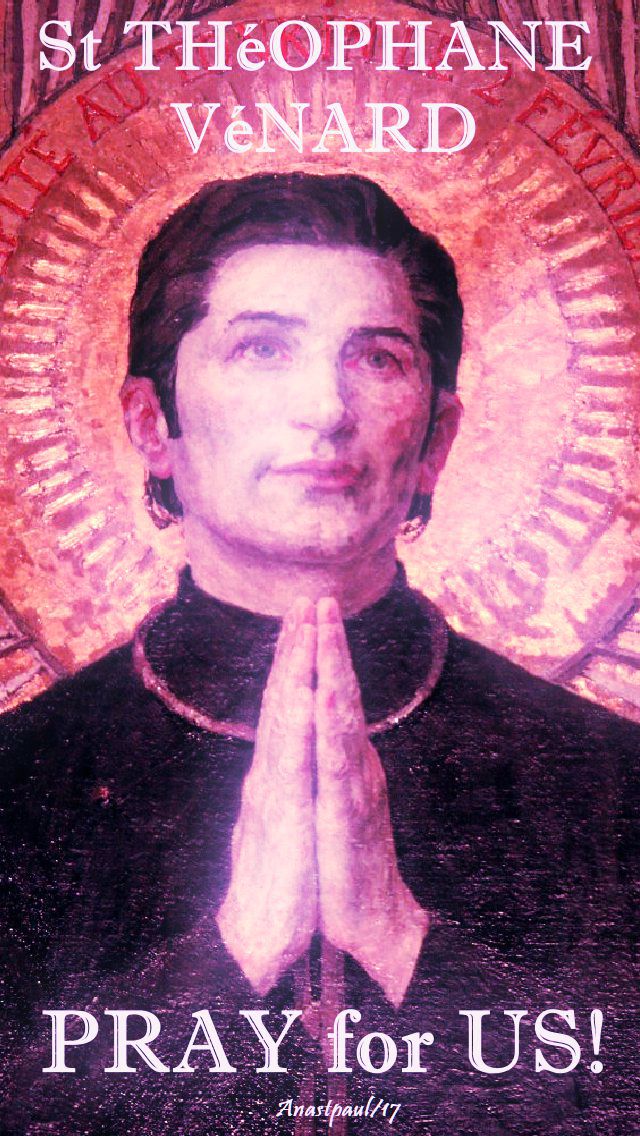 From Secret of Mary:   Nos. 23-24
True Devotion to Our Blessed Lady

If we would go up to God and be united with Him, we must use the same means He used to come down to us to be made Man and to impart His graces to us.    This means is a true devotion to our Blessed Lady.

There are several true devotions to our Lady, here I do not speak of those which are false.   The first consists in fulfilling our Christian duties, avoiding mortal sin, acting more out of love than with fear, praying to our Lady now and then, honouring her as the Mother of God, yet without having any special devotion to her.

The second consists in entertaining for our Lady more perfect feelings of esteem and love, of confidence and veneration.   It leads us to join the Confraternities of the Holy Rosary and of the Scapular, to recite the five or the fifteen decades of the Holy Rosary, to honour Mary’s images and altars, to publish her praises and to enrol ourselves in her modalities.   This devotion is good, holy and praiseworthy if we keep ourselves free from sin.   But it is not so perfect as the next, nor so efficient in severing our soul from creatures, in detaching ourselves in order to be united with Jesus Christ.

The third devotion to our Lady, known and practised by very few persons, is this I am about to disclose to you, predestinate soul.   It consists in giving one’s self entirely and as a slave to Mary and to Jesus through Mary and after that, to do all that we do, through Mary, with Mary in Mary and for Mary.    We should choose a special feast day on which we give, consecrate and sacrifice to Mary voluntarily, lovingly and without constraint, entirely and without reserve – our body and soul, our exterior property such as house, family and income and also our interior and spiritual possessions, namely, our merits, graces, virtues and satisfactions.

“Try to fulfil each day’s task
steadily and cheerfully.
The life of a true Christian
should be a perpetual jubilee,
a prelude to the festivals of eternity.”

“Be merry, really merry.
The life of a true Christian
should be a perpetual joy,
a prelude to the
festival of eternity.”

“Carry gently
the cross of this life,
like Jesus did,
until the day
of the peaceful passing.” 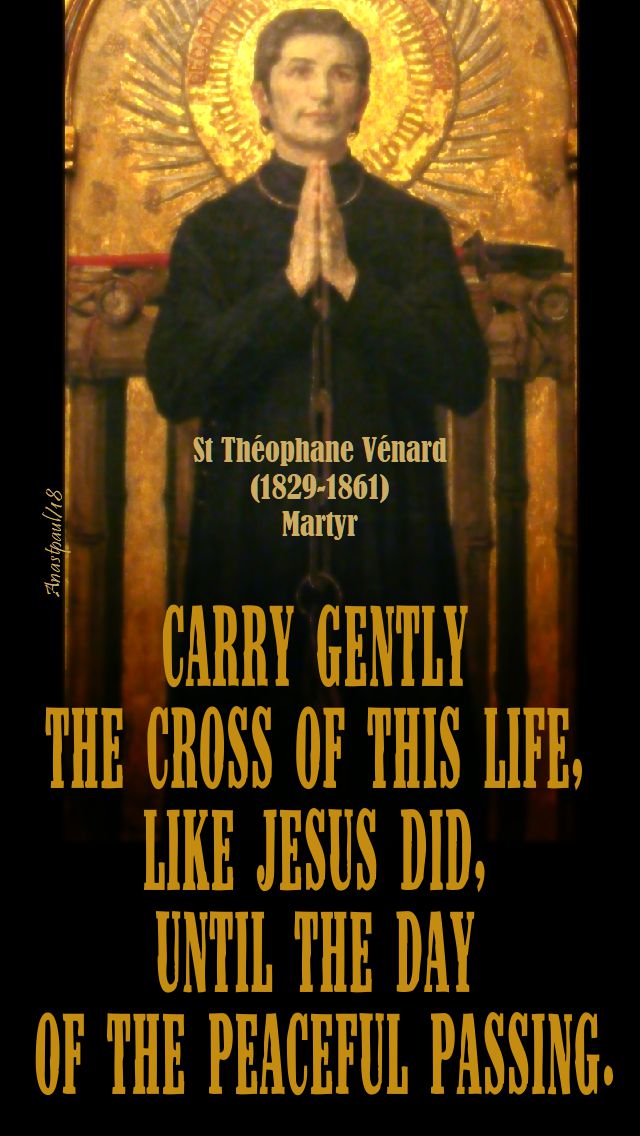 “Courage!
God asks of us
only our goodwill.
His grace does the rest.”

Our Morning Offering – 6 November – Tuesday of the Thirty First week in Ordinary Time, Year B

Give me Yourself, O my God,
give Yourself to me.
Behold I love You
and if my love is too weak a thing,
grant me to love You more strongly.
I cannot measure my love
to know how much it falls short of being sufficient
but let my soul hasten to Your embrace
and never be turned away,
until it is hidden in the secret shelter
of Your presence.
This only do I know,
that it is not good for me
when You are not with me,
when You are only outside me.
I want You in my very self.
All the plenty in the world
which is not my God is utter want.
Amen 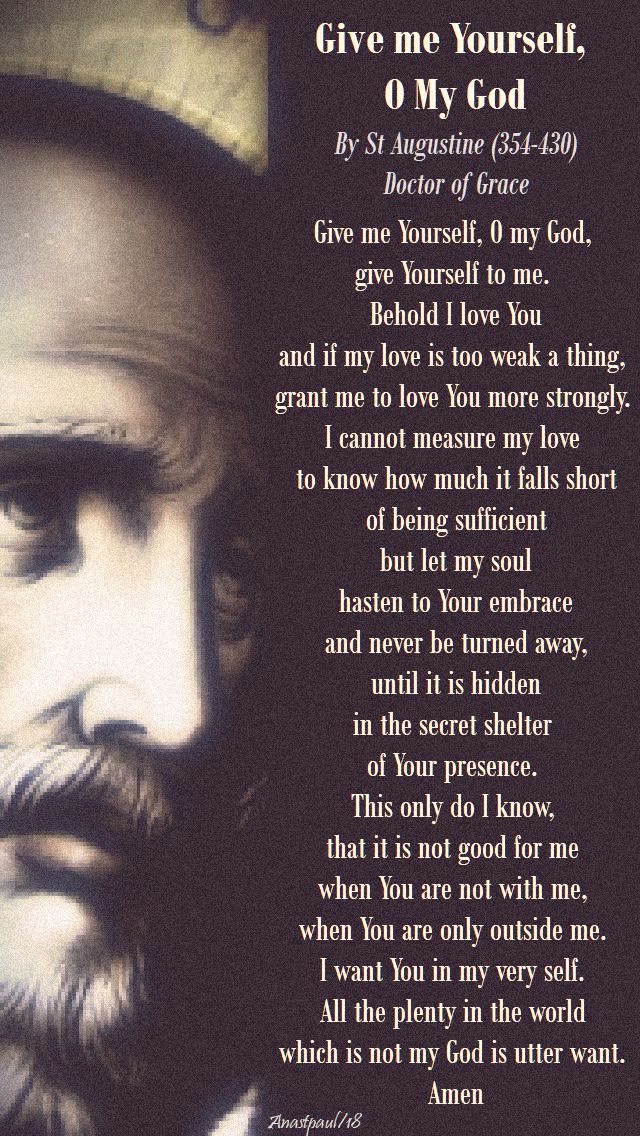 Saint of the Day – 6 November – Saint Jean-Théophane Vénard, M.E.P. (1829-1861) Martyr, Missionary – born on 21 November1829 at Saint-Loup-sur-Thouet, Diocese of Poitiers, France – martyred on 2 February 1861 in Tonkin, Vietnam.   St  Théophane was a French Catholic missionary to Indo-China.   He was a member of the Paris Foreign Missions Society.   He was Beatified in company with thirty-three other Catholic martyrs, most of whom were natives of Tonkin, Cochin-China, or China.    StPope John Paul II Canonised him, with nineteen other martyrs, in 1988 (their combined memorial is 24 November). 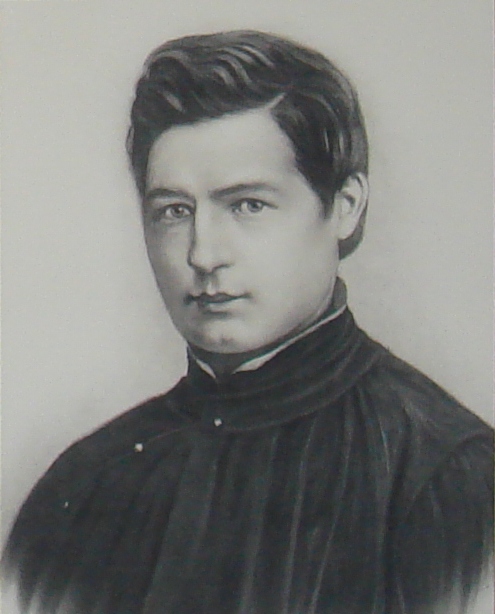 Théophane Vénard studied at the College of Doué-la-Fontaine, Montmorillon, Poitiers, and at the Paris Seminary for Foreign Missions which he entered as a sub-deacon. Ordained a priest on 5 June 1852, he departed for the Far East on 19 Sept.   After fifteen months at Hong Kong he arrived at his mission in West Tonkin (northern Vietnam).   At the time, it was illegal to proselytise in Vietnam.

Shortly after Father Vénard’s arrival, a new royal edict was issued against Christians and bishops and priests were obliged to seek refuge in caves, dense woods and elsewhere. Father Vénard continued to exercise his ministry at night and, more boldly, in broad day. On 30 November 1860, he was betrayed and captured.   Tried before a mandarin, he refused to apostatise and was sentenced to be beheaded.   He remained a captive until 2 February and during this interval lived in a cage, from which he wrote to his family beautiful and consoling letters, joyful in anticipation of his crown.   His bishop, Monsignor Retord, wrote of him at this time:  “Though in chains, he is as gay as a little bird”.

He wrote these words in a farewell to his father:

“All those around me are civil and respectful and a good number love me.

From the great mandarin down to the last soldier, they all regret that the laws of the country condemn me to death.

I have not had to endure any torture, like so many of my brothers.

One light saber blow will separate my head from my body, like a spring flower that the master of the garden picks for his pleasure.

Let us all try to please our sovereign Lord and Master by the gift and the fragrance He has given us.

I wish you, dear father, a long, quiet and virtuous life.   Carry gently the cross of this life, like Jesus did, until the day of the peaceful passing.   Father and son will meet again in paradise.   I, little ephemeral, I will go there first.   Goodbye.

Your very devoted and respectful son

On the way to martyrdom Father Vénard chanted psalms and hymns.   To his executioner, who coveted his clothing and asked what he would give to be killed promptly, he answered:   “The longer it lasts the better it will be”.   His head, after exposure at the top of a pole, was secured by the Christians and is now venerated in Tonkin.   The body rests in the crypt at the motherhouse of the Paris Foreign Mission Society in Paris, France.

St Leonard of Reresby
Bl Leonianus of Autun
St Melaine of Rennes
St Paul of Constantinople
St Pinnock
St Severus of Barcelona
Bl Simon of Aulne
St Stephen of Apt
St Theobald of Dorat
St Théophane Vénard MEP (1829-1861) Martyr
St Valentine of Genoa
St Victor Chumillas-Fernández
St Winnoc of Wormhoult
—
Martyrs of Antioch – 10 saints: Ten Christians murdered together by Arabs after their seizure of Antioch, Syria. No names or other details about them have come down to us. 637 in Antioch, Syria.

Martyrs of Gaza – 9 saints: A group of Christian soldiers who were captured by Saracens invading the area of Gaza in Palestine. When the men continued to profess their Christianity, they were executed. We know the names of some of the martyrs – Himerius, John (2 of them), Kallinikos (Callinoco), Paul, Peter, Stephen and Theodore (2 of them). They were beheaded in Gaza, Palestine.