God called you out of the darkness into his wonderful light.   Once you were less than nothing, now you are God’s own.   Once you knew very little of God’s kindness, now your very lives have been changed by it….1 Peter 2:9-10

From St Columban’s letter to the French Bishops:
“We are all fellow members of one body,
whether Franks or Britons or Irish or whatever our race.
Thus, let all our races rejoice, in knowledge of the faith
and in recognising the Son of God …
In Him, let us love one another, praise one another, correct
one another, encourage one another, pray for one another.”

(Letter 2, to the French bishops) 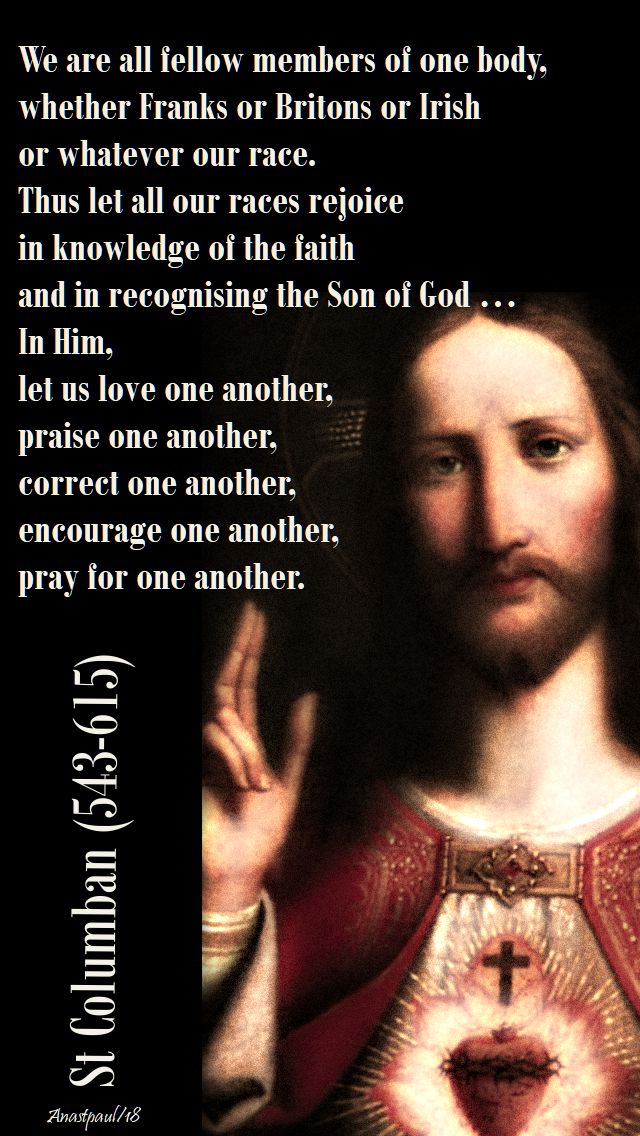 St Columban suffered for his outspokenness in the face of moral corruption and public depravity.    He was exiled but his words were remembered years later and many of his warnings heeded.   He preached the word of Christ fearlessly and was not afraid of the anger of kings.   It is the kind of Christian courage we should have.

From his fourth letter:
“May no-one and nothing separate us from
the love of Christ, no trail, no difficulty, no persecution,
no hunger, no nakedness, no danger,
no death by sword, fire, cross or murder, nothing sad,
nothing sweet, nothing hard, nothing fair,
may none of the world’s vanities
separate us from Christ.” 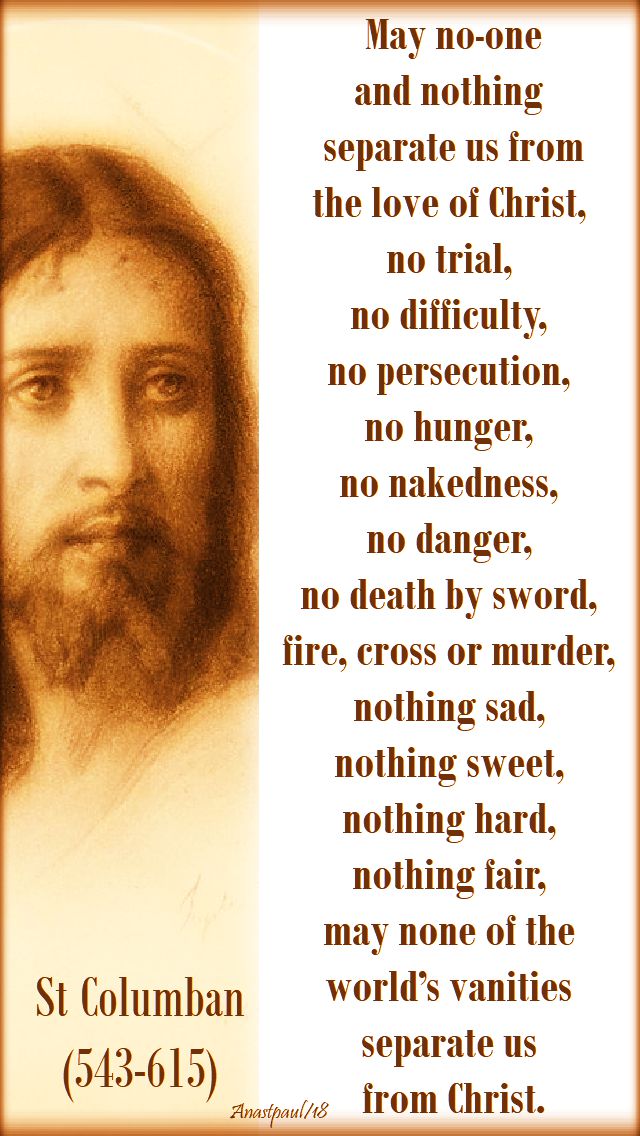 St Columban, Pray for us! 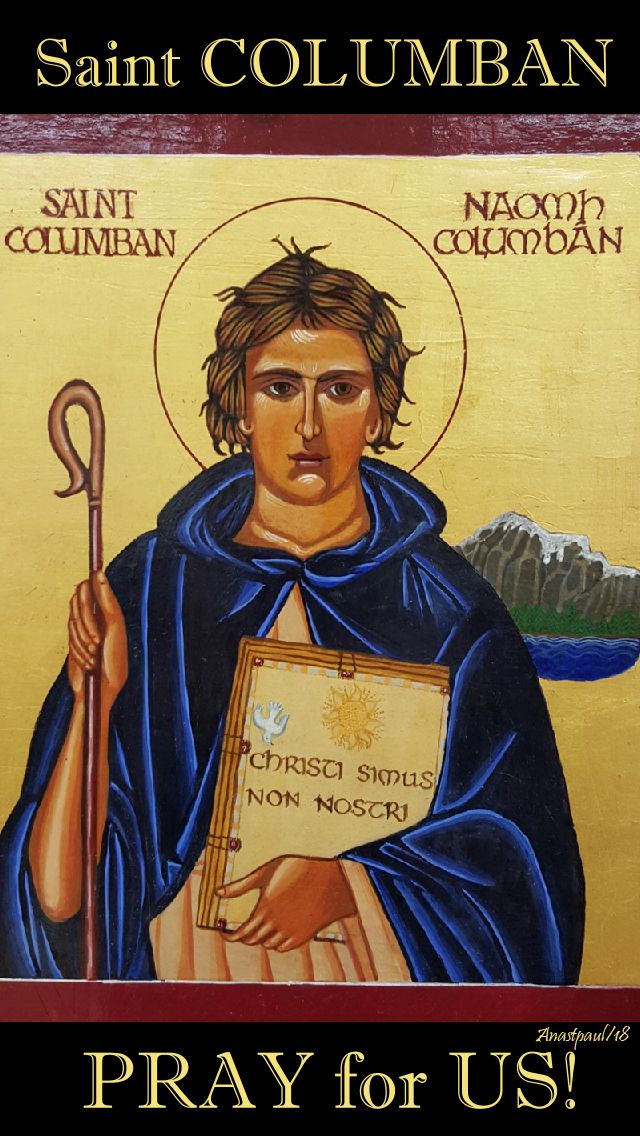 “We, indeed, are,
as I have said,
chained to the
Chair of Saint Peter.” 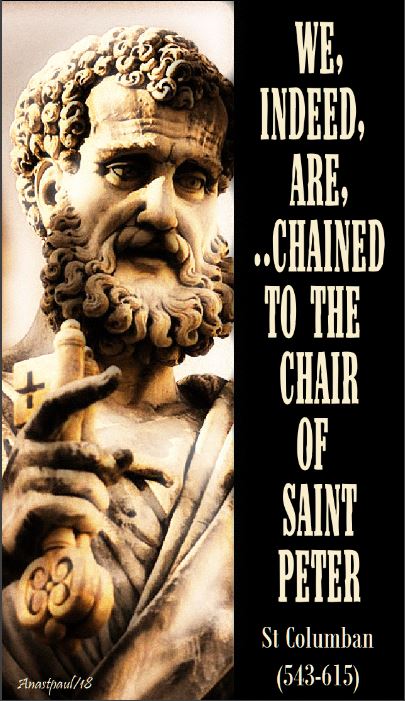 “Be gentle to the weak,
firm to the stubborn,
steadfast to the proud,
humble to the lowly.” 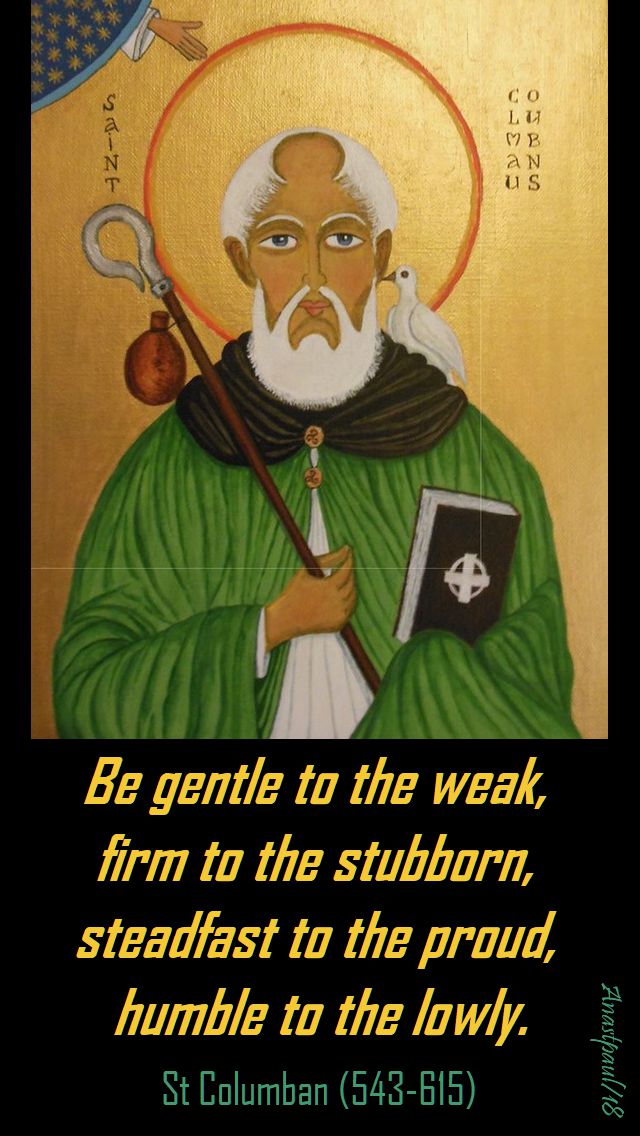 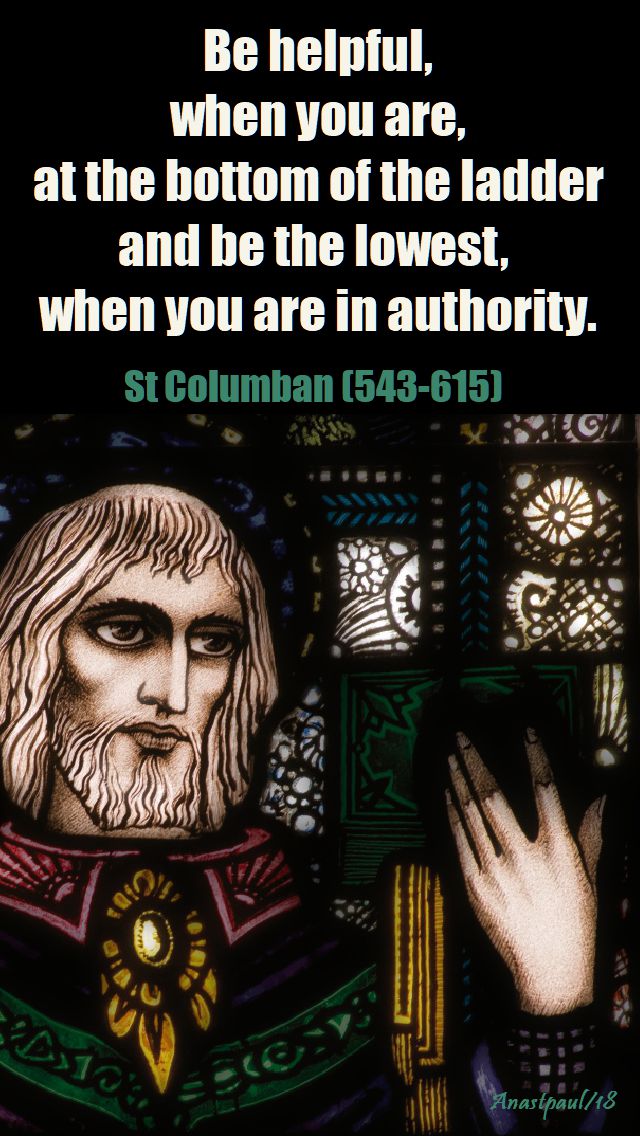 “Be slow to anger,
swift to learn,
slow also to speak,
as St James says,
equally swift to hear.”

“Be respectful to the worthy,
merciful to the poor.” 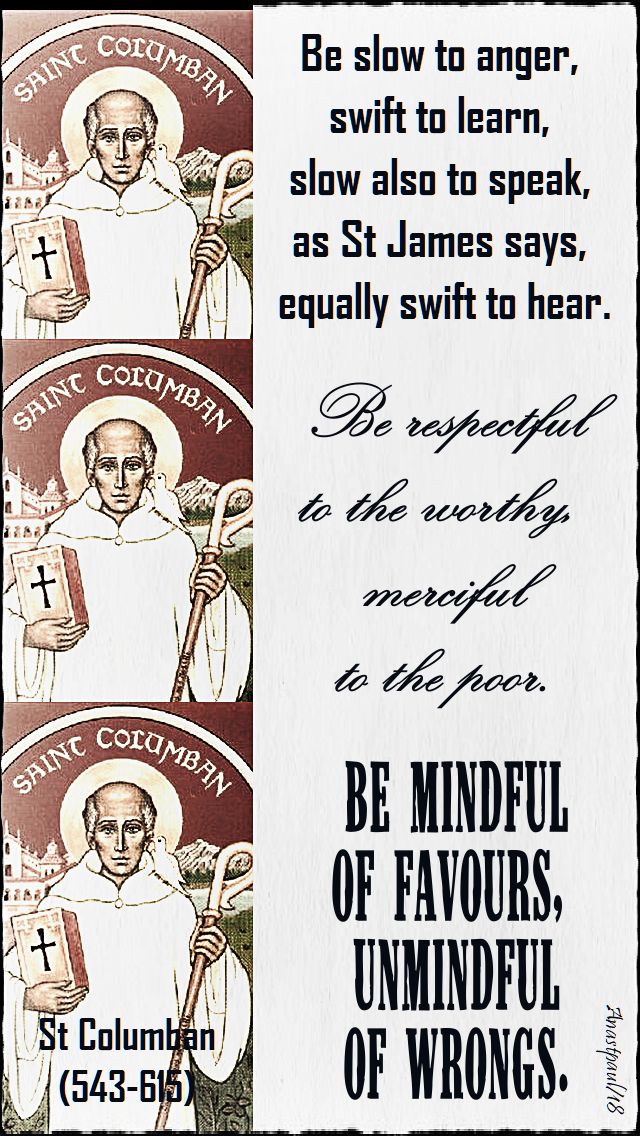 And he entered the temple and began to drive out those who sold, saying to them, “It is written, ‘My house shall be a house of prayer’ but you have made it a den of robbers.”…Luke 19:45-46 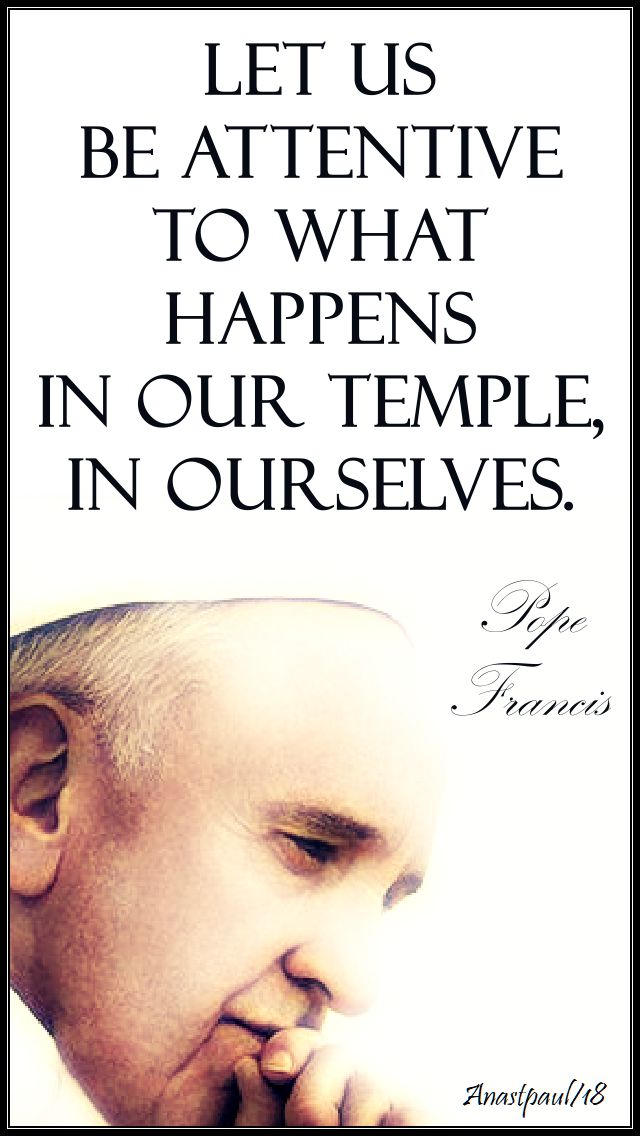 PRAYER – Lord God, in the life of St Columban you combined a zeal for mission and a love of the monastic life.   May his prayer and example, prompt us to love You above all things, to listen and respond to the promptings of the Holy Spirit who teaches us to be true ‘stones’ of the temple, building up the Body of Christ.   May we always we aware, that our actions affect the whole building of Your Church.   Grant us the grace, that by our lives, we may strengthen and increase the household of the Faith.   We make our prayer through Christ, our Lord with the Holy Spirit, one God, forever amen. 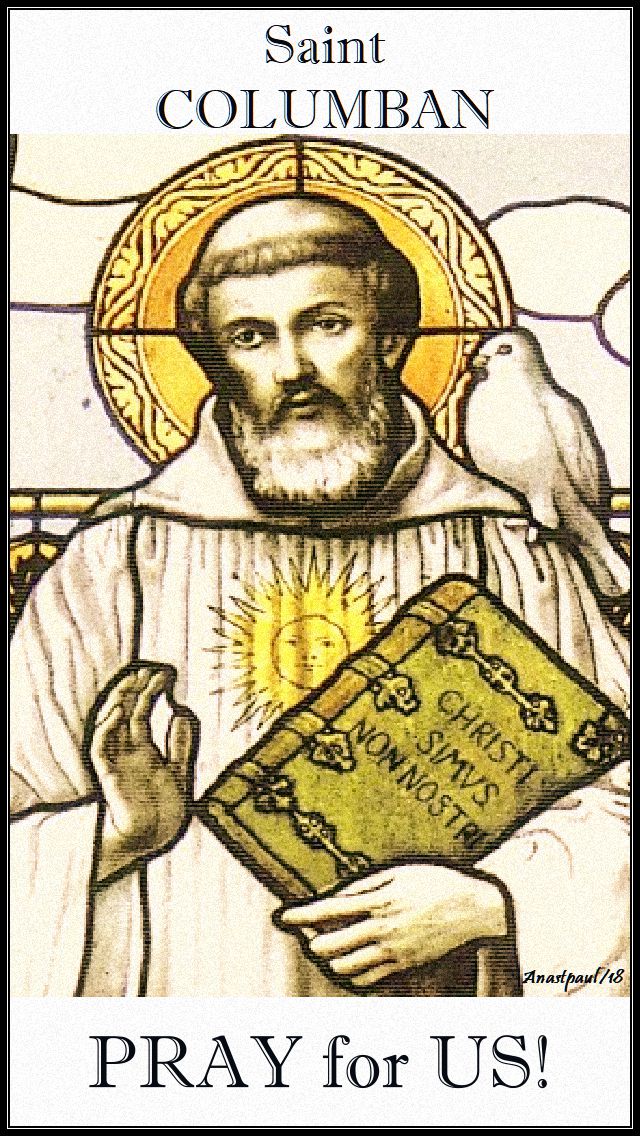 Lord, kindle our lamps,
Saviour most dear to us,
that we may always shine
in Your presence
and always receive light
from You, the Light Perpetual,
so that our own personal darkness
may be overcome
and the world’s darkness
driven from us.
Amen 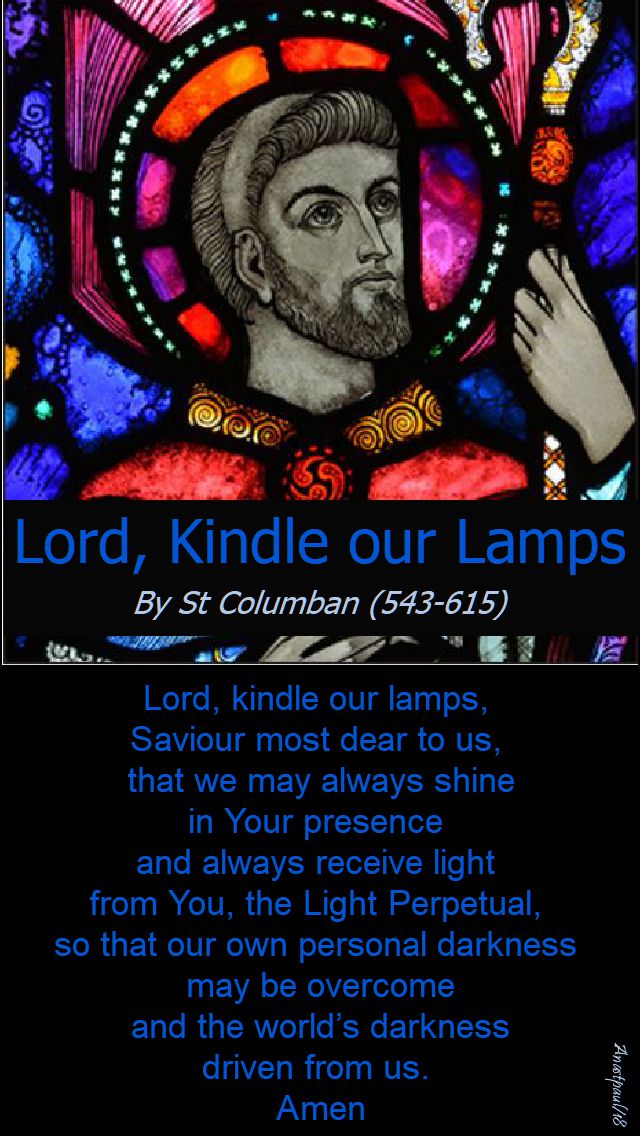 Saint of the Day – 23 November – St Columban (543-615) – Monk, Irish Missionary, Abbot, Writer, Reformer, Teacher, Miracle-worker, Founder of numerous monateries in present-day France and Italy.   Patronages – against floods, Bobbio, Italy, Missionary Society of Saint Columban, motorcyclists.   Columban is named in the Roman Martyrology on 23 November, which is his feast day in Ireland.   His feast is observed by the Benedictines on 24 November and 26 November by the Franciscans. 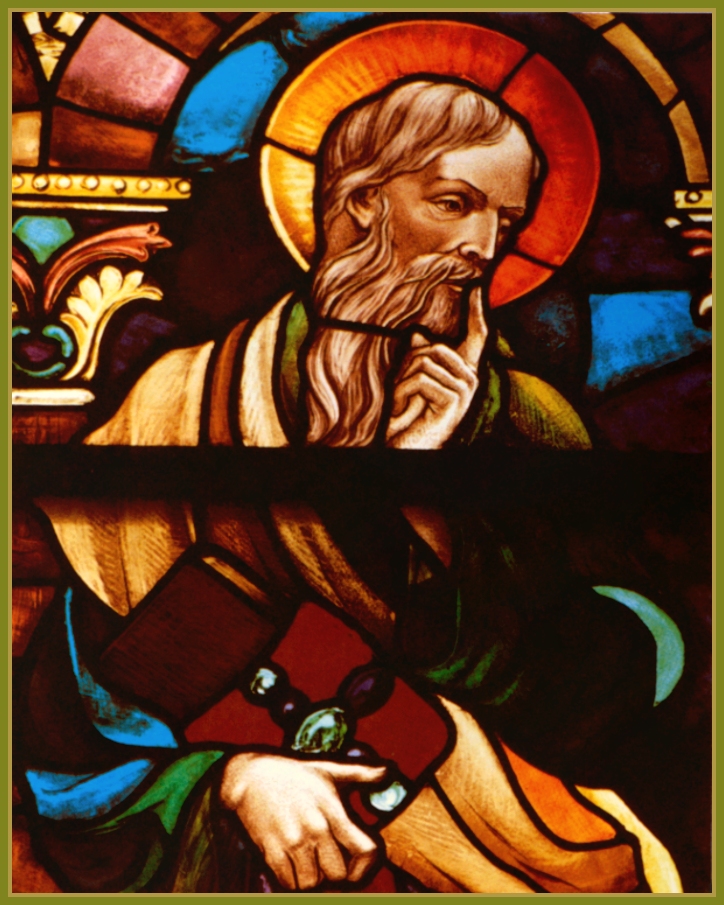 Well-born, handsome and educated, Columban was torn between a desire for God and easy access to the pleasures of the world.   Acting on advice of a holy anchoress, he decided to withdraw from the world.   His family opposed the choice, his mother going so far as to block the door.   He became a Monk at Lough Erne and studied Scripture extensively, writing a commentary on the Psalms.    He then became a Monk at Bangor under abbot Saint Comgall. 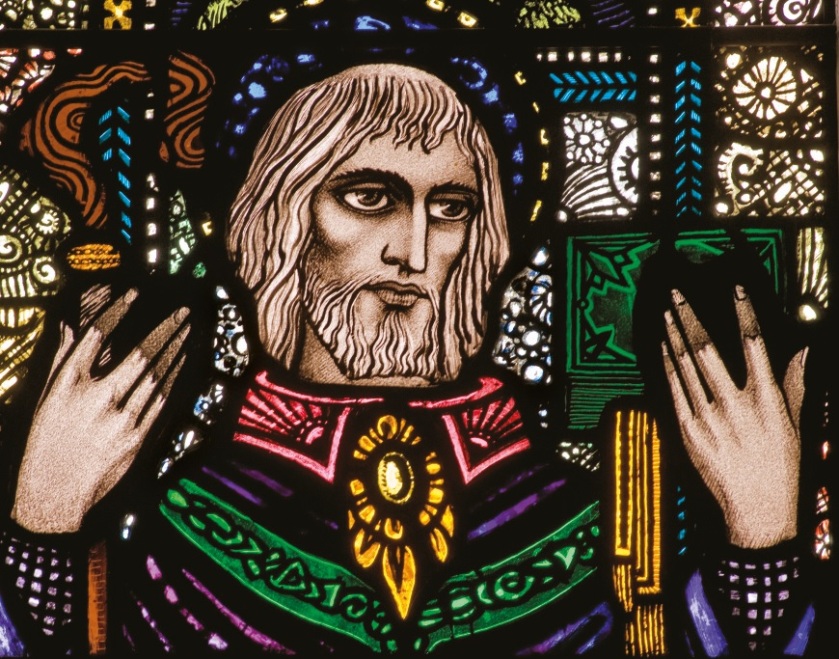 In middle age, Columban felt a call to missionary life.   With twelve companions (Saint Attala, Columban the Younger, Cummain, Domgal, Eogain, Eunan, Saint Gall, Gurgano, Libran, Lua, Sigisbert and Waldoleno) he travelled to Scotland, England and then to France in 585.   The area, though nominally Christian, had fallen far from the faith but were ready for missionaries and they had some success.   They were warmly greeted at the court of Gontram and king of Burgundy invited the band to stay.   They chose the half-ruined Roman fortress of Annegray in the Vosges Mountains for their new home with Columban as their abbot.

The simple lives and obvious holiness of the group drew disciples to join them and the sick to be healed by their prayers.   Columban, to find solitude for prayer, often lived for long periods in a cave seven miles from the monastery, using a messenger to stay in touch with his brothers.   When the number of new monks over-crowded the old fortress, King Gontram gave them the old castle of Luxeuil to found a new house in 590. Soon after, a third house was founded at Fontaines.   Columban served as master of them all and wrote a Rule for them which incorporated many Celtic practices, was approved by the Council of Macon in 627 but was superseded by the Benedictine. 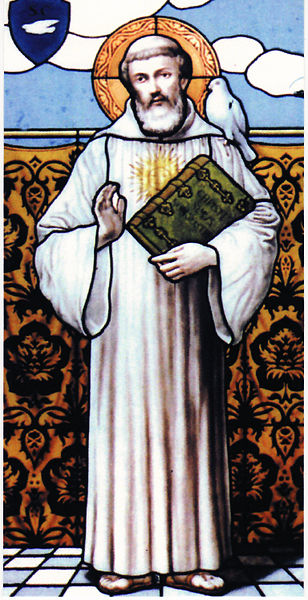 Problems arose early in the 7th century.   Many Frankish bishops objected to a foreign missionary with so much influence, to the Celtic practices he brought, especially those related to Easter and his independence from them.   In 602 he was summoned to appear before them for judgement, instead of appearing, he sent a letter advising them to hold more synods and to concern themselves with more important things than which rite he used to celebrate Easter.   The dispute over Easter continued to years, with Columban appealing to multiple popes for help but was only settled with Columban abandoned the Celtic calendar when he moved to Italy. 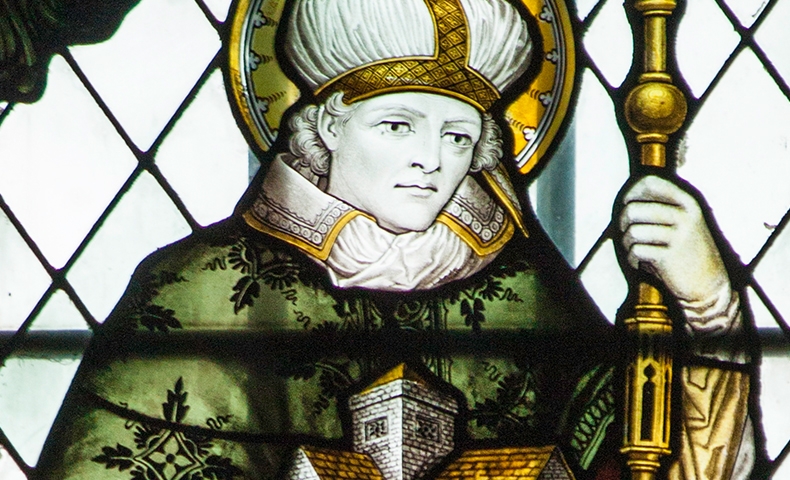 In addition to his problems with the bishops, Columban spoke out against vice and corruption in the royal household and court, which was in the midst of a series of complex power grabs.   Brunehault stirred up the bishops and nobility against the abbot, he was ordered to conform to the local ways.   Columban refused and was briefly imprisoned at Besançon but he escaped and returned to Luxeuil.   An armed force was sent to order Columban and his foreign monks back to Ireland.   As soon as his ship set sail, a storm drove them back to shore, the captain took it as a sign and set the monks free.

They travelled to Metz, France, then Mainz, Germany, Suevi, Alamanni and finally Lake Zurich.   Their evangelisation work there was unsuccessful and the group passed on to Arbon, then Bregenz and then Lake Constance.   Saint Gall, who knew the local language best, took the lead in this region and many were converted to the faith.  The group founded a new monastery as their home and base.   However, a year later political upheaval caused Columban to cross the Alps into Italy, arriving in Milan in 612.   The Christian royal family treated him well and he preached and wrote against Arianism and Nestorianism.   In gratitude, the Lombard king gave him a tract of land call Bobbio between Milan and Genoa in Italy.   There he rebuilt a half-ruined church of Saint Peter and around it he founded an abbey that was to be the source for evangelisation throughout northern Italy for centuries to come. 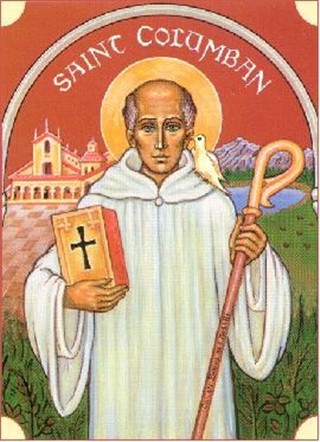 Columban always enjoyed being in the forests and caves and as he walked through the woods, birds and squirrels would ride on his shoulders.   Toward the end of his life came word that his old enemies were dead and his brothers wanted him to come back north, but he declined.   Knowing that his time was almost done, he retired to a cave for solitude and died as he had predicted.   His influence continued for centuries as those he converted handed on the faith, the brothers he taught evangelised untold numbers more and his brother monks founded over one hundred monasteries to protect learning and spread the faith.

Miracles ascribed to Columban during his lifetime, include –
• to obtain food for a sick brother monk, he cured the wife of the donor;
• once when he was surrounded by wolves, he simply walked through them;
• at one point he needed a cave for his solitary prayers; a bear lived there; when Columban asked, the bear left;
• when he needed water in order to live in the cave, a spring appeared nearby;
• when the Luxeuil Abbey granary ran empty, Columban prayed over it and it refilled;
• he multiplied bread and beer for his community;
• he cured several sick monks, who then got straight out of bed to reap the monastery’s harvest;
• gave sight to a blind man at Orleans;
• he destroyed a vat of beer being prepared for a pagan festival by breathing on it;
• when the monastery needed help in the fields, he tamed a bear, and yoked it to a plough.

He impressed his contemporaries as a giant of a man in mind and spirit, who revived religion on the continent and prepared the way for the Carolingian renaissance.   He died at Bobbio on 23 November 615.

Columban did not lead a perfect life.   According to biographers, he could be impetuous and even headstrong, for by nature he was eager, passionate and dauntless. These qualities were both the source of his power and the cause of his mistakes.   His virtues, however, were quite remarkable.   Like many saints, he had a great love for God’s creatures.   Stories claim that as he walked in the woods, it was not uncommon for birds to land on his shoulders to be caressed, or for squirrels to run down from the trees and nestle in the folds of his cowl.   Although a strong defender of Irish traditions, he never wavered in showing deep respect for the Holy See as the supreme authority.   His influence in Europe was due to the conversions he effected and to the rule that he composed.   The life of Columban stands as the prototype of missionary activity in Europe.

The remains of Columban are preserved in the crypt at Bobbio Abbey.   Many miracles have been credited to his intercession.   In 1482, the relics were placed in a new shrine and laid beneath the altar of the crypt.   The sacristy at Bobbio possesses a portion of the skull of the saint, his knife, wooden cup, bell and an ancient water vessel, formerly containing sacred relics and said to have been given to him by Pope Gregory I.  According to some authorities, twelve teeth of the saint were taken from the tomb in the fifteenth century and kept in the treasury but these have since disappeared.

The St Columban’s Missionary Society took its name from him, recognising in him a missionary genius with a uniquely Irish spirit. 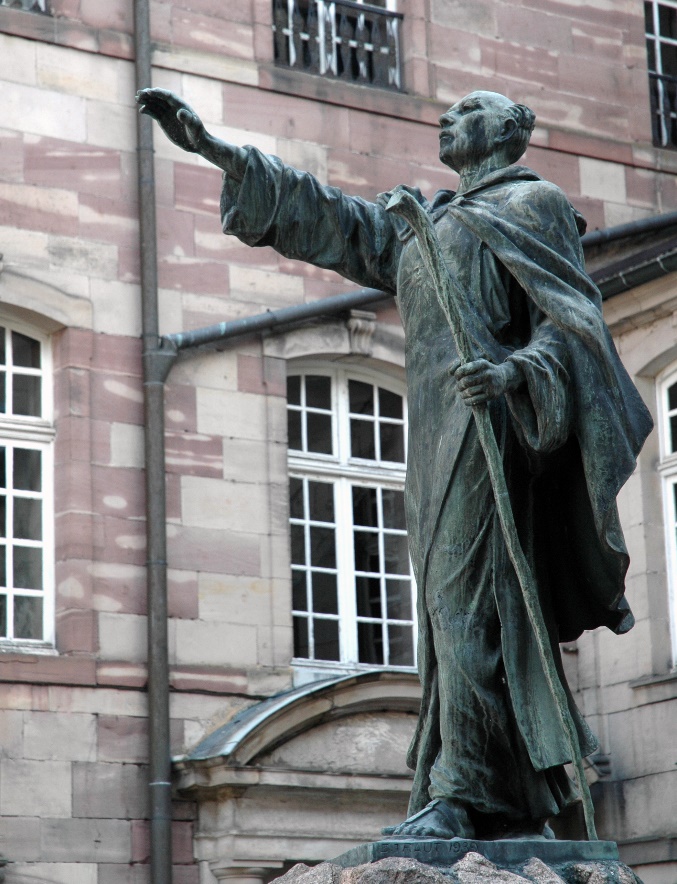