Nikolaus Gross was born on 30 September 1898 of a colliery blacksmith in Niederwenigern, near the city of Essen and attended the local Catholic school from 1905-12.   He then worked initially in a plate rolling mill, then as a grinder and later as a face-worker in a coal mine.   He worked underground for five years.

In his limited spare time, he continued his higher education.   In 1917, he joined the Christian Miners’ Trade Union.   In 1918 he joined the Centre Party (the Catholic political party).   In 1919 he joined the St Anthony’s Miners Association (Antonius Knappenverein KAB) in Niederwenigern.   It was the major Catholic union for the Catholic miners and a major Catholic voice.   At the age of 22 he became secretary for young people in the union.   A year later he became assistant editor of the union newspaper Bergknappe (“The Miner”).   His work with the union took him around Germany until he finally settled in Bottrop in the Ruhr Valley, in what is now the Diocese of Essen.

In the meantime, he married Elizabeth Koch from Niederwenigern.   They had seven children in the course of their happy marriage.   He loved his family above everything and was an exemplary father in his responsibility for their education and upbringing in the faith.   Gross did not withdraw into the shell of family life.   He remained attuned to the great social problems, precisely in his responsibility for his family.   Work and social obligations were the place in which he realised his Christian mission.   In his doctrine of faith written in 1943 he wrote:  “The majority of great achievements come into being through the daily performance of one’s duties in the little things of everyday routine.   Our special love here is always for the poor and the sick”.

At the beginning of 1927, he became assistant editor of the Westdeutsche Arbeiterzeitung (West German Workers’ Newspaper), the organ of the St Anthony’s Miners’ Association (KAB) and soon became its editor-in-chief.   Here he was able to give Catholic workers guidance on social and labour questions.   In the course of time, it became clear to him that the political challenges contained a moral claim and that the social problems cannot be solved without spiritual efforts.

The editor became a messenger who bore witness to his faith here too.   When he moved in this capacity to the Ketteler House in Cologne, in 1929, he already had a clear opinion about approaching Nazism  . Starting out from Bishop Ketteler’s main idea that a reform of the conditions in society can only be achieved by a reform in attitude, he saw in the Nazis’ success in society:  “political immaturity” and “a lack of discernment”.   Already at that time he called the Nazis “mortal enemies of the present state”.   As editor of the organ of the KAB, on 14 September 1930, he wrote:   “As Catholic workers we reject Nazism not only for political and economic reasons but decisively also, resolutely and clearly, on account of our religious and cultural attitude”.

Already a few months after Hitler’s seizure of power, the leader of the German Labour Front, Robert Ley, called the KAB’s Westdeutsche Arbeiterzeitung “hostile to the state”.  In the following period, Gross attempted to save the newspaper from destruction without making concessions on its content.   From then on he knew how to write between the lines.   In November 1938 came the final ban on the workers’ newspaper which, in the meantime, had been renamed Kettelerwacht (Ketteler’s Watch).

Gross, who had to work very hard for his education was no great orator.   But he spoke convincingly, warm-heartedly and with power of persuasion.   The fact that Nikolaus Gross joined the resistance in Germany resulted from his Catholic religious conviction. For him the key was “that one must obey God more than men”.   “If something is demanded of us that goes against God or the Faith, then not only may we but we must, refuse obedience (towards men)”   Thus wrote Nikolaus Gross in 1943 in his doctrine of faith.   It was becoming ever clearer to him that Germany had reached this state under the Hitler regime.

Gross set down his joint thoughts in two writings which later fell into the hands of the Gestapo:   The Great Tasks and Is Germany Lost?   They were to contribute towards his execution.

In 1940, Gross had to endure interrogations and house searches.   After the ban on the association’s newspaper, he published a series of small pamphlets which were intended to help strengthen the critical force of faith and Gospel values among workers.   We find an answer for the reasons which motivated someone like Nikolaus Gross in the memoirs of the well-known, workers’ chaplain, Msgr Caspar Schulte of Paderborn.   There we read:  “In my many conversations, especially with Nikolaus Gross and the association’s head, Otto Müller, I got to know and admire these men’s moral greatness.   They did not stumble into death.   They went their way also prepared to bear a painful death for the sake of freedom.   I said to Nikolaus Gross on the day before the assassination attempt on Hitler of 20 July 1944:  “Mr Gross, remember that you have seven children. I have no family for which I am responsible.   It’s a matter of your life’.   To which Gross made a really great statement to me:  “If we do not risk our life today, how do we then want one day to justify ourselves before God and our people?'”.

In 1943, Gross wrote in a booklet, what was almost a prophecy:  “Sometimes, my heart becomes heavy and the task appears insoluble if I measure my own human imperfection and inadequacy against the greatness of the obligation and the weight of the responsibility.   If a generation must pay the highest price, death, for its short life, we look for the answer in ourselves in vain.  We find it only in Him in whose hand we are safe in life and in death.   We never know what problems are waiting to test the power and strength of our souls….  Man’s ways lie in obscurity.  But even darkness is not without light.   Hope and faith, which always hasten ahead of us, already have a presentiment of the breaking of a new dawn.   If we know that the best thing in us, the soul, is immortal, then we also know that we shall meet each other again”.   What a testimony to a sense of responsibility, feeling for reality and assurance of faith!   For Gross, trust in God was the foundation on which he did not falter.   During the years of the war he formed a network of resistance to the Nazi’s and he was often the courier between the centres of resistance.   He was well informed of the plot to assassinate Hitler, even though he took no part in its preparation and execution.

After the abortive assassination attempt on 20 July 1944, events came thick and fast. Gross, who was not himself involved in the preparation and execution of the plot, was arrested towards noon at his home on 12 August 1944 and taken first to the prison in Ravensbrück and then to the penitentiary in Berlin-Tegel.   His wife, Elisabeth, came to Berlin twice to visit him  . She reported clear signs of torture on his hand and arms.   His letters from the prison and the witness of the chaplain, Fr Peter Buchholz, give impressive evidence that constant prayer was the source of strength in his difficult and, in the end, hopeless position.   In every letter he never failed to request constant prayer from his wife and his children, just as he himself also prayed for his family each day.

On 15 January 1945, the death sentence was pronounced by the chairman of People’s Court, Roland Freisler.   His final remark in the court record and the real reason for the sentence:  “He swam along in treason and consequently had to drown in it!”.   He was hanged in Berlin-Plotzensee on 23 January 1945.   The Nazis did not make any martyrs.   They did not allow the hanged man to have a grave.   For the followers of falsehood and hatred there was only brutal destruction.  His ashes were scattered across a sewage farm.

But the testimony to truth and faith is not to be obliterated!   It lives on in those who have gone before us as a shining example.   The prison chaplain, Fr Peter Buchholz, who blessed the condemned man on his final walk, reported afterwards:  “Gross bowed his head silently during the blessing.   His face already seemed illuminated by the glory into which he was getting ready to enter”. 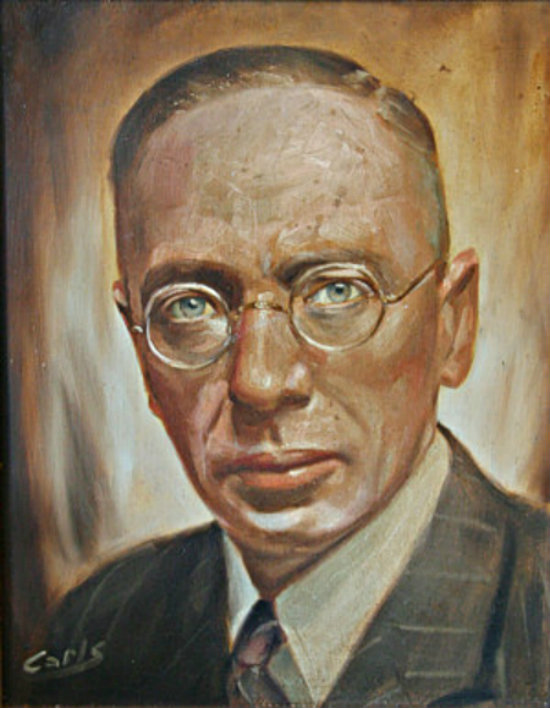 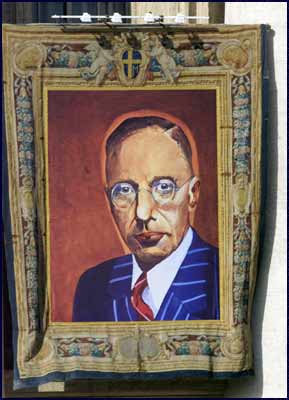 There is a museum dedicated to Nikolaus Gross in Niederwenigern.   In 1948 a street in Cologne was named in his honour and streets were named after him in places such as Berlin and Essen amongst others.   A chapel was dedicated to him on 10 October 2004 and a memorial stone in Gelsenkirchen-Buer on 26 October 2003.