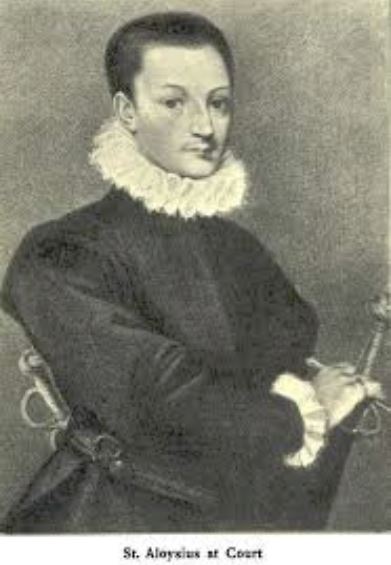 The Lord can make saints anywhere, even amid the brutality and license of Renaissance life.   Florence was the “mother of piety” for Aloysius Gonzaga despite his exposure to a “society of fraud, dagger, poison and lust.”   As a son of a princely family, he grew up in royal courts and army camps.   His father wanted Aloysius to be a military hero.

At age 7 Aloysius experienced a profound spiritual quickening.   His prayers included the Office of Mary, the psalms and other devotions.   At age 9 he came from his hometown of Castiglione to Florence to be educated, by age 11 he was teaching catechism to poor children, fasting three days a week and practising great austerities.   When he was 13 years old, he travelled with his parents and the Empress of Austria to Spain and acted as a page in the court of Philip II.   The more Aloysius saw of court life, the more disillusioned he became, seeking relief in learning about the lives of saints.

A book about the experience of Jesuit missionaries in India suggested to him the idea of entering the Society of Jesus and in Spain his decision became final.   Now began a four-year contest with his father.   Eminent churchmen and laypeople were pressed into service to persuade Aloysius to remain in his “normal” vocation.   Finally he prevailed, was allowed to renounce his right to succession and was received into the Jesuit novitiate.

Like other seminarians, Aloysius was faced with a new kind of penance—that of accepting different ideas about the exact nature of penance.   He was obliged to eat more and to take recreation with the other students.   He was forbidden to pray except at stated times.   He spent four years in the study of philosophy and had Saint Robert Bellarmine (1542-1621), Doctor of the Church, as his spiritual adviser.

In 1591, a plague struck Rome.   The Jesuits opened a hospital of their own  . The superior general himself and many other Jesuits rendered personal service.   Because he nursed patients, washing them and making their beds, Aloysius caught the disease.   A fever persisted after his recovery and he was so weak he could scarcely rise from bed.   Yet, he maintained his great discipline of prayer, knowing that he would die within the octave of Corpus Christi, three months later, at the age of 23.

As a saint who fasted, scourged himself, sought solitude and prayer and did not look on the faces of women, Aloysius seems an unlikely patron of youth in a society where asceticism is confined to training camps of football teams and boxers and sexual permissiveness has little left to permit.   Can an overweight and air-conditioned society deprive itself of anything?   It will, when it discovers a reason, as Aloysius did.   The motivation for letting God purify us is the experience of God loving us in prayer.