Saint of the Day – 23 June – St Etheldreda (c 636-679) Abbess and widow, an East Anglian princess, a Fenland and Northumbrian queen and Abbess of Ely – born in c 636 probably n Exning, near Newmarket in Suffolk, England.   She died on 23 June 679 of natural causes.   When her body was re-interred in 694 it was found to be incorrupt and again in 1106 when her relics were transferred to Ely Cathedral where her shrine now remains, her body was incorrupt.   Patronage – throat ailments, widows, neck ailments, th University of Cambridge. 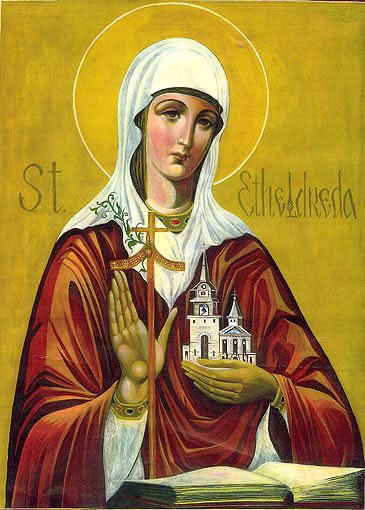 She was one of the four saintly daughters of Anna of East Anglia, including Wendreda and Seaxburh of Ely, all of whom eventually retired from secular life and founded abbeys.

Born and brought up in the fear of God-her mother and three sisters are numbered among the Saints – Etheldreda had but one aim in life, to devote herself to His service in the religious state.   Her parents, however, had other views for her and, in spite of her tears and prayers, she was compelled to become the wife of Tonbercht, a tributary of the Mercian king.   She lived with him as a virgin for three years and at his death retired to the Isle of Ely, that she might apply herself wholly to heavenly things. 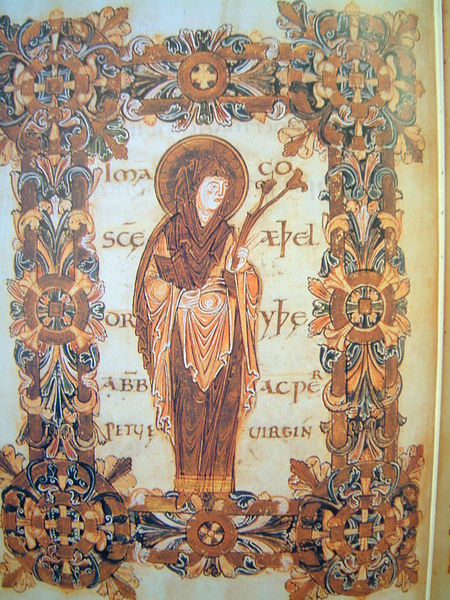 This happiness was but short-live,; for Egfrid, the powerful King of Northumbria, pressed his suit upon her with such eagerness that she was forced into a second marriage.   Her life at his court was that of an ascetic rather than a queen – she lived with him not as a wife but as a sister and, observing a scrupulous regularity of discipline, devoted her time to works of mercy and love.

After twelve years, she retired with her husband’s consent to Coldingham Abbey, which was then under the rule of St Ebba, and received the veil from the hands of St Wilfrid.  As soon as Etheldreda had left the court of her husband, he repented of having consented to her departure and followed her, meaning to bring her back by force.   She took refuge on a headland on the coast near Coldingham and here a miracle took place, for the waters forced themselves a passage round the hill, barring the further advance of Egfrid.

The Saint remained on this island refuge for seven days, till the king, recognising the divine will, agreed to leave her in peace.   God, who by a miracle confirmed the Saint’s vocation, will not fail us if, with a single heart, we elect for him.

In 672 she returned to Ely, and founded there a double monastery.   The nunnery she governed herself and was by her example a living rule of perfection to her sisters.

St Bede the Venerable records many miracles worked by her relics at her Shrine.   Below is her Statue and resting place in Ely Cathedral. 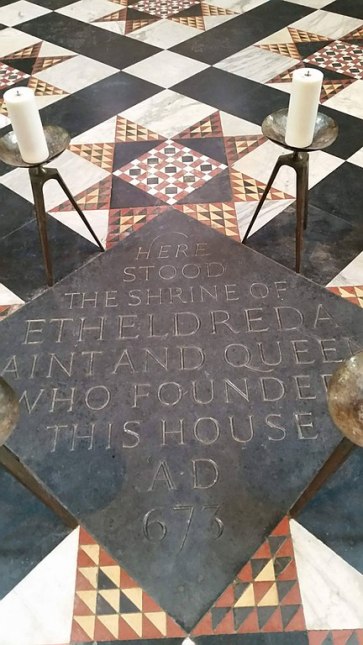 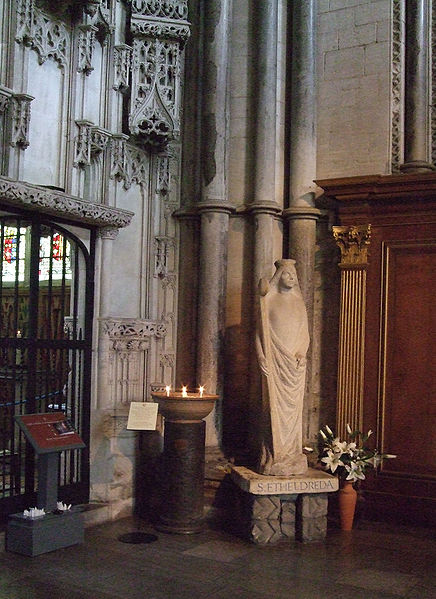