Thought for the Day – 27 August – Tuesday of the Twenty-first week in Ordinary Time, Year C and The Memorial of St Monica (322-387)

“Many a mother, who is anxious for her son’s bodily welfare, neglects his soul.
So, did NOT the Saint of today – her son might be accomplished, eloquent, able and distinguished – all this was nothing to her, while he was dead in God’s sight, while he was the slave of sin, while he was the prey of heresy.
She desired his true life.
She wearied heaven with prayer
and wore out herself,
with praying –
she did not at once prevail.
He left his home,
he was carried forward by his four bearers –
ignorance,
pride,
appetite
and ambition –
he was carried out into a foreign land,
he crossed over from Africa to Italy.
She followed him,
she followed the corpse,
the chief,
the only mourner-
she went where he went, from city to city.
It was nothing to her to leave her dear home and her native soil, she had no country below;  her sole rest, her sole repose, her Nunc dimittis, was his new birth.
So while she still walked forth in her deep anguish and isolation
and her silent prayer,
she was at length rewarded by the long-coveted miracle.
Grace melted the proud heart
and purified the corrupt breast of Augustine
and restored
and comforted
his mother!”

“How many difficulties there are also today in family relationships
and how many mothers are anguished because their children choose mistaken ways!
Monica, a wise and solid woman in the faith, invites us not to be discouraged
but to persevere in our mission of wives and mothers,
maintaining firm our confidence in God and clinging with perseverance to prayer.”

St Monica, Pray with us for our sons, Pray for Us! 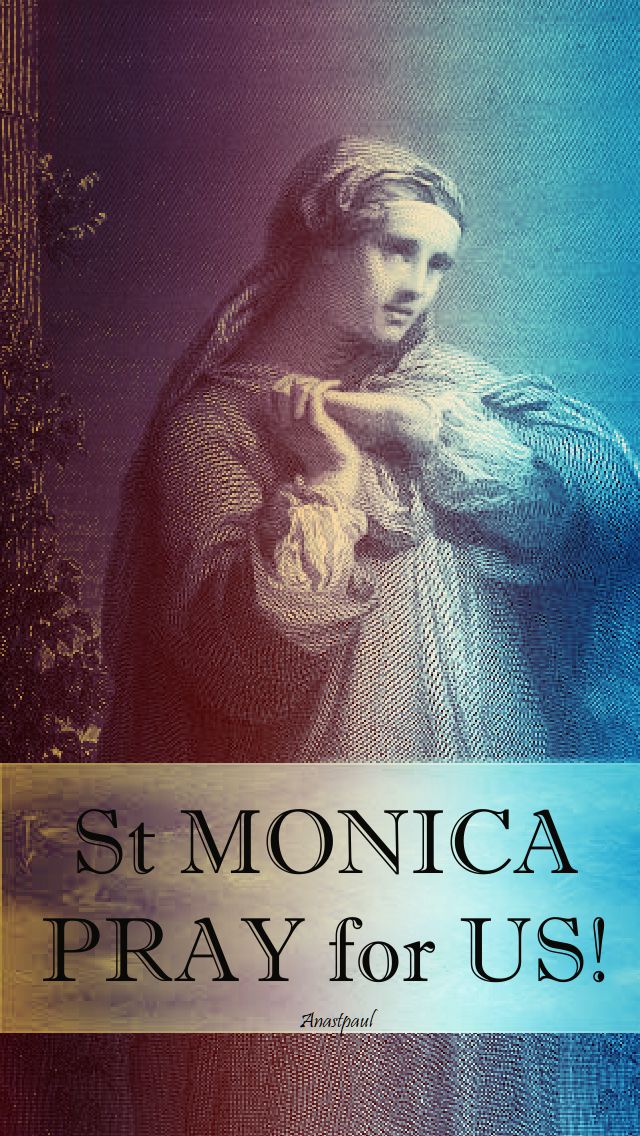