Thought for the Day – 7 September – – Saturday of the Twenty-second week in Ordinary Time, Year C and a Marian Saturday

The Heart of Mary Saturdays and the Saturday Rosary

In the message of Fatima, especially in the apparitions of 13 June 13 and 13 July 1917, Mary drew attention to the custom of devoting Saturdays to her and praying the Rosary in reparation.   Lucia, the eldest of the three children heard the following on 13 June:

“My child, behold my heart surrounded with thorns which ungrateful men place therein at every moment by their blasphemies and ingratitude.   You, at least, try to console me, and tell them that I promise to help, at the hour of death, with the graces needed for salvation, whoever, on the First Saturday of five consecutive months, shall confess and receive Holy Communion, recite five decades of the Rosary and keep me company for fifteen minutes while meditating on the fifteen Mysteries of the Rosary with the intention of making reparation to me.”

On 13 July, the children were again admonished to say the Rosary.   At this time, the Blessed Mother asked for the consecration of the world to her Immaculate Heart and for communion of reparation on the first Saturday of each month.   These messages were accompanied by an appeal and a promise – an appeal for prayer and reparation by the people for their transgressions against the divine law, a promise of peace and love in this life and eternal happiness in the next, on the twofold condition of prayer and amendment.

In 1925, Lucia vouched for this message, saying that Mary would assist us at the hour of death if the first Saturdays of five consecutive months were sanctified with confession, communion, praying the rosary and meditation.

This practice refreshed the custom known as the Rosary Saturdays, popular since the seventeenth century and continued to the present at places of pilgrimage.   Both Pope Pius IX and Pope Leo XIII fostered this custom.   St Louis Marie Grignion de Montfort (1673-1716), also fostered the rosary in connection with his missions, which often encompassed Saturdays.

“Let my future be as God wants it.
I leave it in the hands of Him
who cannot operate but for the good of all.
And this is enough to make me happy.”

REFLECTION – “The Eucharist is an essential part of Sunday… On Easter morning, first the women and then the disciples had the grace of seeing the Lord.   From that moment on, they knew that the first day of the week, Sunday, would be His day, the day of Christ the Lord.   The day when creation began, became, the day when creation was renewed. Creation and redemption belong together.

That is why Sunday is so important. It is good that today, in many cultures, Sunday is a free day and is often combined with Saturday so as to constitute a “week-end” of free time.   Yet this free time is empty if God is not present.

Dear friends! Sometimes, our initial impression is that having to include time for Mass on a Sunday is rather inconvenient.   But if you make the effort, you will realise that this is what gives a proper focus to your free time.   Do not be deterred from taking part in Sunday Mass and help others to discover it too.   This is because the Eucharist releases the joy that we need so much and we must learn to grasp it ever more deeply, we must learn to love it.   Let us pledge ourselves to do this – it is worth the effort!   Let us discover the intimate riches of the Church’s liturgy and its true greatness.   It is not we who are celebrating for ourselves but it is the living God Himself, who is preparing a banquet for us.” …Pope Benedict XVI – 21 August 2005

PRAYER – Holy God, almighty Father, You taught us to honour Your holy day and the day of rest.   In Your divine Son, Whom You gave to us as our brother and glorified by His Resurrection, You showed us the way to our eternal life.   As His glorified body shines anew on Easter Sunday, we rejoice in our future life with Him and embrace His day as our own, each Sunday renewing His Resurrection.   We run forward to sing Your glory together with our Holy Mother, the Blessed Virgin Mary, to eternity, through our Lord Jesus Christ, with the Holy Spirit, God forever, amen. 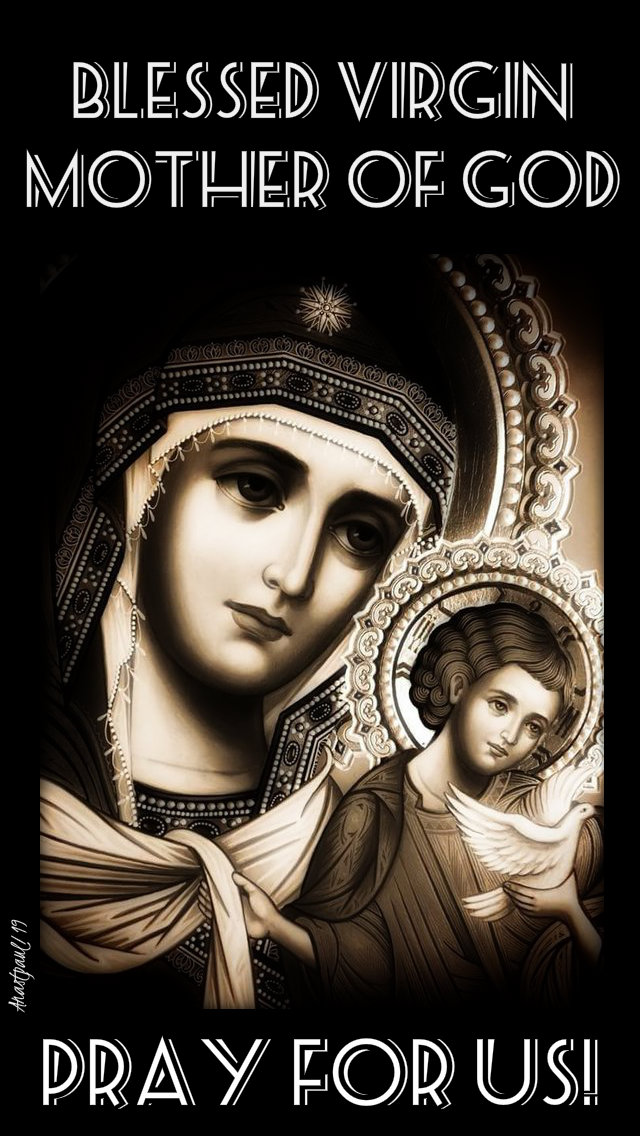 Our Morning Offering – 7 September – Saturday of the Twenty-second week in Ordinary Time, Year C and a Marian Saturday

From the Imitation of Mary

Most merciful Mother of God,
Mary ever-Virgin,
Queen of heaven,
Mistress of the world,
Joy of the Saints
and Comfort of sinners,
hear the groans of contrite hearts.
Grant the desires of the devout,
help the sick in their needs,
strengthen the hearts of the afflicted,
be present to those in their final agony.
Protect your suppliant servants
from the assaults of demons,
bring with you
all who love you
into the reward of eternal blessedness,
where, with your beloved Son,
Jesus Christ,
you reign happily forever.
Amen.

The ninth of the 12 children of Giacomo and Anna Maria Scuri Mazzucconi studied in the seminaries of Monza and Milan.   He commenced his studies for the priesthood in 1845 and with several seminarians he underwent a course of spiritual exercises.   It was at one such retreat that he met the Father Superior who served in India.   This encounter had a profound effect on Mazzucconi who started to cultivate a desire to become a member of a group of missionaries.   His desire was intensified in 1850 when Pope Pius IX asked the Milanese bishops to establish a workshop for the preparation of people for the missions.

In the meantime Giovanni was ordained on 25 May 1850 and the Pontifical Institute for Foreign Missions (PIME) was established with apostolic approval.   Two months later in July 1850, Mazzucconi received an invitation from Msgr Angelo Ramazzotti to become a charter member of the PIME, together with Father Salerio, three other clergymen (Timoleone Raimondi, Angelo Ambrosoli and Paolo Reina) and two catechists (Giuseppe Corti and Luigi Tacchini).

They embarked for Australia in March 1852.   There two groups were established, one for the Island of Rook and the other to Woodlark Island.   They intended to go first to Oceania. Following a three-month journey, the missionaries arrived on 25 July 1852, in Australia, where they studied the language and customs of New Guinea under the tutelage of a Marist for two months.

Upon their arrival at Woodlark Island on 28 October 1852, the mission was divided into three groups with Mazzucconi, Reina, a catechist and their Marist mentor continuing to Rook Island, where they worked for two years under difficult conditions.   It was there that Giovanni immersed himself in the culture of the natives but the weather cut his studies short and he became ill and was sent to Sydney for treatment.

Upon his recovery, he sailed on 18 August 1855, back to Woodlark not knowing that his companions had abandoned the mission stations at Woodlark and Rook.   When his schooner ran aground on a coral reef, the natives ambushed him and he was killed with an axe by one of the locals.   He had approached them but the native nearest him struck him on the head with an axe.   He died of his wounds.   Eight months later Father Raimondi led an expedition to find Mazzucconi and learned of his martyrdom.

The beatification process commenced in Milan and finally, the Congregation for the Causes of Saints discussed the cause and came to the belief that Giovanniwas killed in hatred of the faith.   St Pope John Paul II approved these findings and Beatified him on 19 February 1984.

Tomorrow I will embark and Saturday, the day after tomorrow, I will already be on the high seas on my way to Woodlark.   This year, when I sailing to Sydney, on Wednesday of Holy Week, we were overtaken by a hurricane that ripped our sails and snapped our ropes and the top half of a mast.   It then drove us hither and thither all over the sea without direction and with little hope, for four days, until the Easter sun shone again like some new thing above us and we were truly like people raised from the dead.

Well, that God who saved me then will be with me again in this journey and if I do not abandon Him, He will be with me always and while He is with me everything that can happen to me will always be a grace, a blessing for which I should thank Him.   If in danger He wants to withdraw, or pretends to be asleep on the bow of the ship, like the Apostle, I will go to wake Him and let Him see my danger.   And then, if He does not want to listen, I will say – Lord, command me to come to You and my soul will walk on the waters, it will go to His feet and be content forever.

I do not know what He is preparing for me in the journey I begin tomorrow.   I know one thing only, if He is good and loves me immensely, everything else – calm or storm, danger or safety, life or death, are merely changeable and passing expressions of the beloved immutable, eternal Love.   Yes, my beloved brethren, we have another country, another home, a kingdom where we must all meet, where there will no longer be separations or departures, where past sorrows and danger will merely serve to increase our consolation and glory.