Saint of the Day – 19 October – Blessed Jerzy Popieluszko (1947-1984) Priest and Martyr, Worker for Social Justice – born on 14 September 1947 in Okopy, Podlaskie, Poland, was kidnapped on 19 October 1984 by the Sluzba Bezpieczenstwa (Security Service of the Ministry of Internal Affairs), the Communist Polish secret police and beaten to death from 19 to 20 October 1984 near Wloclawek, Pomorskie, Poland.   Patronage – Solidarity.

Fr Jerzy was born on 14 September 1947 in Okopy near Suchowola.   After finishing school, he attended the priests’ seminary at Warsaw.   He served his army duties in a special force, aimed to keep young men from becoming priests.   This treatment had no effect on Popiełuszko, as, after finishing his army service, he continued his studies.   As a young priest he served in parishes in Warsaw, which consisted of the common people as well as students.   In 1981, Jerzy Popiełuszko joined the workers, taking part in strikes in the Warsaw Steelworks.   Thereafter, he was associated with workers and trade unionists from the Solidarity movement who opposed the Communist regime in Poland.

He was a staunch anti-communist and in his sermons, interwove spiritual exhortations with political messages, criticising the Communist system and motivating people to protest. During the period of martial law the Catholic Church was the only force that could voice protest comparatively openly, with the regular celebration of Mass presenting opportunities for public gatherings in churches.

Popiełuszko’s sermons were routinely broadcast by Radio Free Europe, and thus became famous throughout Poland for their uncompromising stance against the regime.   The swecret police tried to silence or intimidate him.   When those techniques did not work, they fabricated evidence against him, he was arrested in 1983 but soon released on intervention of the clergy and pardoned by an amnesty. 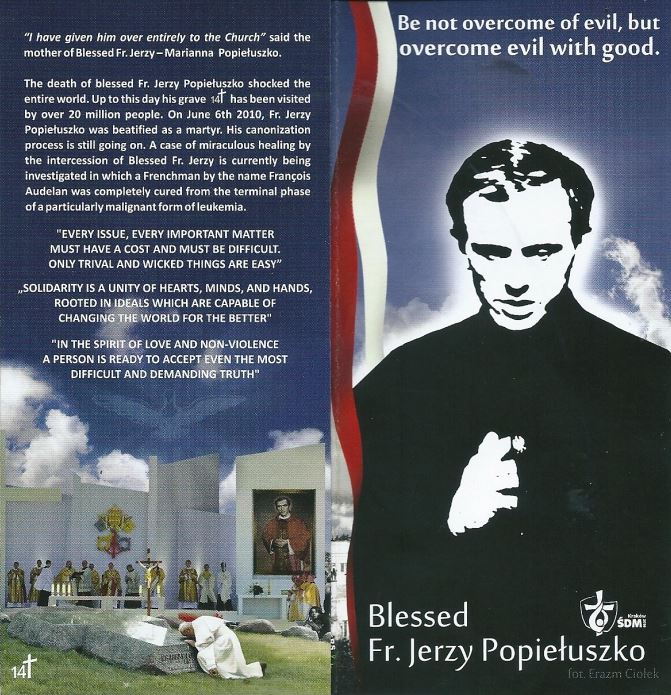 A car accident was set up to kill Jerzy Popiełuszko on 13 October 1984 but he evaded it. The alternative plan was to kidnap him, it was carried out on 19 October 1984.   The priest was beaten to death by three Security Police officers – Captain Grzegorz Piotrowski, Leszek Pękala, and Waldemar Chmielewski.   They pretended to have problems with their car and flagged down Fr Jerzy’s car for help.   They proceeded to attack him – he was severely beaten – to death, tied up and put in the trunk of the car.  The officers bound a stone to his feet and dropped him into the Vistula Water Reservoir near Włocławek from where his body was recovered on 30 October 1984.

News of the political murder caused an uproar throughout Poland and the murderers and one of their superiors, Colonel Adam Pietruszka, were convicted of the crime.   More than 250,000 people, including Lech Wałęsa, attended his funeral on 3 November 1984. Despite the murder and its repercussions, the Communist regime remained in power until 1989.  Fr Jerzy’s murderers – Captain Grzegorz Piotrowski, Leszek Pękala, Waldemar Chmielewski and Colonel Adam Pietruszka, responsible for giving the order to kill – were jailed but released later as part of an amnesty.

Popiełuszko was posthumously awarded the Order of the White Eagle, Poland’s highest decoration, in 2009.   After death, he was buried in St Stanislaus Kostka Church, Warsaw where millions of visitors had paid tribute at his tomb.

He was Beatified by Archbishop Angelo Amato as the representative of Pope Bernedict XVI on 6 June 2010 in Warsaw’s Piłsudski Square.   His mother, Marianna Popiełuszko was present at the event.   More than 1 000,000 people attended the open-air mass in the Polish capital Warsaw to beatify Father Jerzy Popieluszko.   Poland Post issued a set of stamps on that same day to mark the beatification. 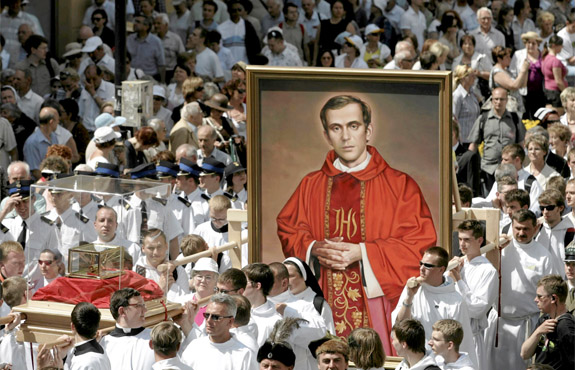 In October 2013, Cardinal Kazimierz Nycz – the Archbishop of Warsaw, the diocese where Popiełuszko was killed – announced that a miracle attributed to the intercession of the Polish priest has been identified and confirmed in France.   Thus Cardinal Nycz predicts that Popiełuszko will likely be canonised soon based on the credibility of the case presented.   A miracle was investigated in a diocesan process in France and the results of that investigation turned over to the Vatican for assessment.

At his funeral, an estimated one million people surrounded his church in Warsaw and as one, they promised to continue his struggle for freedom through non-violence thus living his motto “overcome evil with good” and we know that they won!

“Rest in peace, Father Jerzy.   Solidarity is alive because you gave your life for it.” 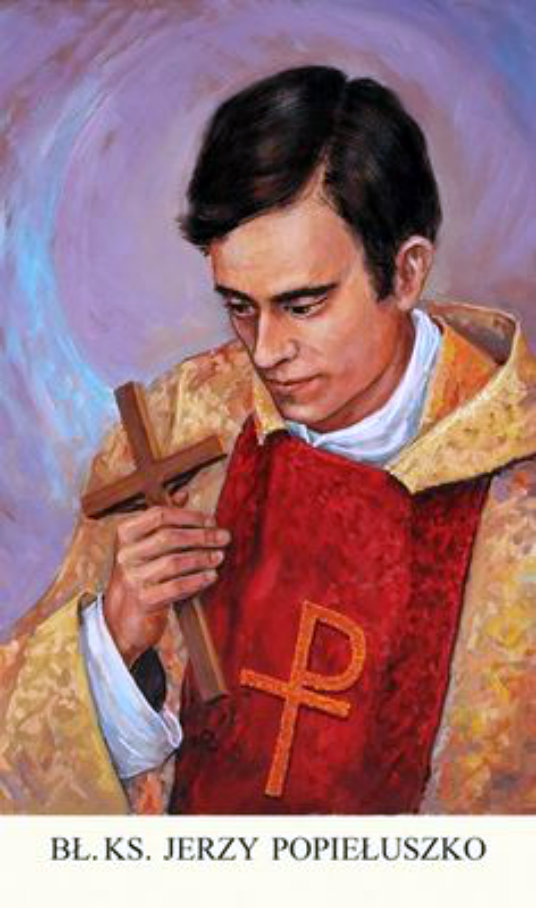