Hermit and Missionary in the Sahara

“[Christ:]   See [My] devotion to men and consider what your own should be.   See that humility for man’s good and learn to humble yourself to do good… to make yourself small to win others, not to fear to go lower or lose your rights when it is a matter of doing good, not to believe that in descending you make yourself powerless to do good.  To the contrary, by descending you imitate Me, by descending you make use of the same means, for the love of humankind, that I Myself employed, by descending you walk in My way and, therefore, in the truth and you are in the best place to lay hold of life and give it to others…  By my incarnation I place Myself on a level with creatures, by My baptism …on that of sinners, descent, humility…  Always descend, always humble yourself.

have mercy on me a sinner! 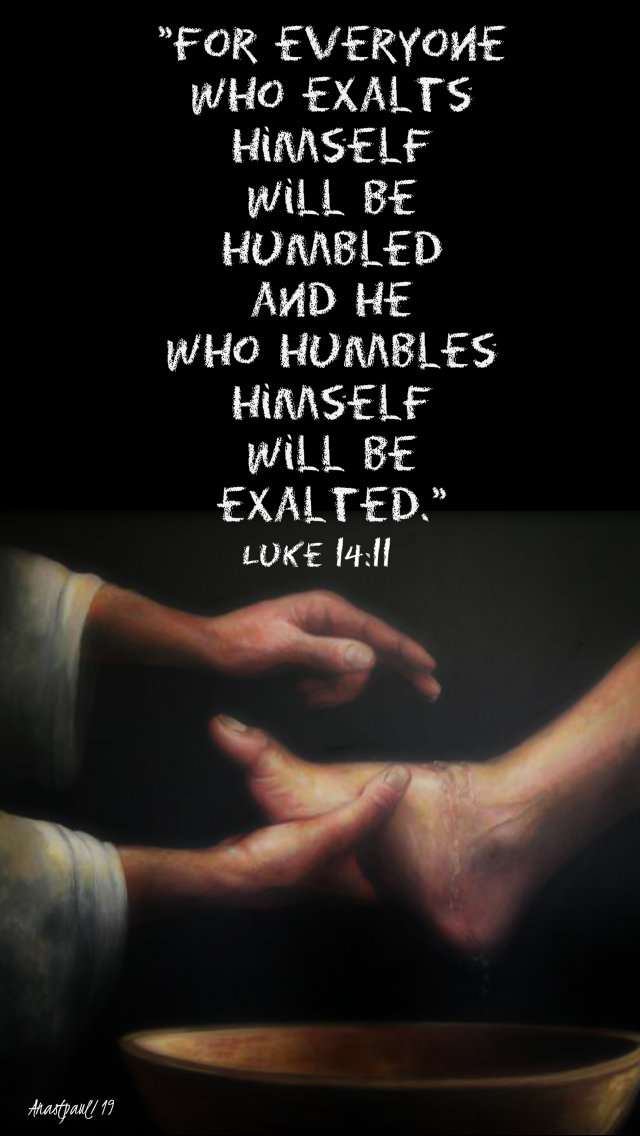 ‘God, be merciful to me a sinner!’

“If you wish to reach high, then begin at the lowest level.
If you are trying to construct some mighty edifice in height,
you will begin with the lowest foundation.
This is humility.
However great the mass of the building you may wish to design or erect,
the taller the building is to be, the deeper you will dig the foundation.
The building in the course of its erection, rises up high
but he who digs its foundation, must first go down very low.
So then, you see even a building is low before it is high
and the tower is raised, only after humiliation.”

“The three most important virtues are:
humility,
humility
and humility.”

“For it is well known, that,
on the spiritual road, not to go on,
overcoming self,
is to go backwards
and not to increase our gain,
is to lose.” 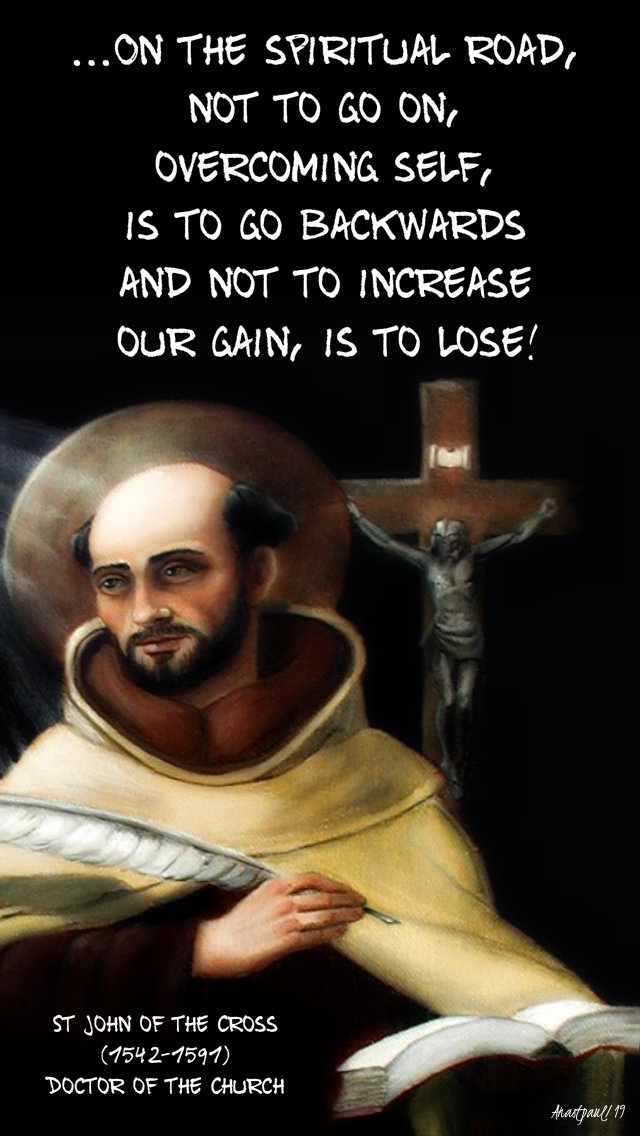 “We are ever but beginning,
the most perfect Christian,
is to himself but a beginner,
a penitent prodigal
who has squandered God’s gifts
and comes to Him,
to be tried over again,
not as a son
but as a hired servant.”

I see thee after the Ascension.
This is a time of bereavement but still of consolation.
It was still a twilight time but not a time of grief.
The Lord was absent but He was not on earth, He was not in suffering.
Death had no power over Him.
And He came to her, day-by-day in the Blessed Sacrifice.
I see the Blessed Mary at Mass and Saint John celebrating.
She is waiting for the moment of her Son’s Presence – now she converses with Him in the Sacred rite and what shall I say now? She receives Him, to whom once she gave birth …..
O Holy Mother, stand by me now at mass time, when Christ comes to me, as thou did minister to thy infant Lord – as thou did hang upon His words when He grew up, as thou was found under His Cross.
Stand by me, Holy Mother, that I may gain somewhat of thy purity, thy innocence, thy faith and He may be the one object of my love and my adoration, as He was of thine.    Amen

REFLECTION – “The Gospel of the two men praying in the temple, the Pharisee and the tax collector, reveals to what kind of prayer penetrates to God.
We notice a difference even in their respective postures.   The one stands “with unbowed head” as if the temple belongs to him, while the other “keeps his distance,” as if he has crossed the threshold of a house in which he really does not belong.
The first one prays “to himself,” really, not even praying to God but reviewing for himself the list of his virtues assuming that, when God Himself notices them, He will respect them and marvel at them.   Moreover, this man catalogues his virtues as a means of setting himself off from “other men,” none of whom have attained his level of perfection. He is travelling the road of “self-discovery,” which is precisely the path of “loss of God.” The other man can only discover sin in himself, can only find himself devoid of God, which, as he pleads, “be merciful to me,” turns into an empty place for God to occupy.  No-one, whose ultimate goal is his own perfection, will ever find God.
Anyone who has the humility to permit God’s perfection to take effect in his emptiness – not by being passive but by working with the talent He gives him – will be considered a “justified” person in the sight of God.” … Cardinal Hans Urs von Balthasar (1905-1988)

PRAYER – Lord God, deepen our faith, strengthen our hope, enkindle our love and so that we may obtain what You promise, make us love what You command.   Mary, holy Mother, teach us complete humility and trust, help us to be a total fiat as you are.   We make our prayer, through Christ our Lord, in the unity of the Holy Spirit, God for all eternity, amen.

We adore You, O wonderful Sacrament
of the presence of the One
who loved His own “to the end.”
We thank You, O Lord,
who edifies,
gathers together
and gives life to the Church.
O divine Eucharist, flame of Christ’s love
that burns on the altar of the world,
make the Church, comforted by You,
evermore caring, in wiping away,
the tears of the suffering
and in sustaining the efforts
of all who yearn for justice and peace.
And you, Mary, “Eucharistic” Woman
who offered your virginal womb
for the incarnation of the Word of God,
help us to live the Eucharistic Mystery
in the spirit of the “Magnificat.”
May our lives be a never-ending praise
of the Almighty who concealed Himself
beneath the humility of the Eucharistic signs.

Bartholomew was born in the city of Vicenza to the noble family of di Braganca.   He studied at Padua, receiving there the habit of the recently founded Order from the hands of St Dominic himself, at about the age of twenty.   Immediately after his ordination, he was sent to Lombardy to preach against the heretics who were leading others away from the true faith.   As a young priest he founded a military order whose purpose was to keep civil peace in towns throughout Italy.

He was so effective in this, that the Holy Father, Pope Gregory IX called him to Rome and appointed him Master of the Sacred Palace (the Papal Theologian), which is an office traditionally held by Dominicans.   Because of the differing needs of the Church, the following Pope, Innocent IV, appointed him to become a bishop on the Island of Cyprus. For most men, such an appointment is an honour and a tribute to their holiness and their demonstrated leadership skills.   But for Bartholomew, it was a form of exile that had been urged by an antipapal group that was only too happy to see him leave for Cyprus.

Already having become a friend of St Louis the King of France, Bl Bartholomew renewed this friendship as St Louis went through Cyprus on his way to Egypt during the Seventh Crusade (1248).   In 1254, he was sent as legate to the courts of England and France and as Henry III of England was, at that time, in his realm in the Aquitaine, Bartholomew travelled there towards the close of that year, then accompanied the English king and queen to Paris.   He was, on this occasion, presented by the King of France with a relic of the true Cross and a thorn from Jesus’ Crown of Thorns, worn at His Crucifixion.   These he afterwards placed in the beautiful Dominican Church built by him at Vicenza which is known as the Church of the Crown.

Two years later, in order to ensure the presence of so distinguished a prelate at his own court, Pope Alexander IV made him Bishop of Vicenza, his native city.   During his tenure of that see, Bartholomew was subject to the hostility of the local ruler Ezzelino III, a Ghibelline who was noted for the brutality of his rule and who was a strong opponent of Papal power.   But in Vicenza, he not only continued to preach the truths of the faith and free the local Church from the errors of the Manicheans but he also established such a sense of peace that the people asked him to become their temporal ruler as well.   He rightfully declined but this shows the great virtue that he not only had but also, that he instilled in his people. 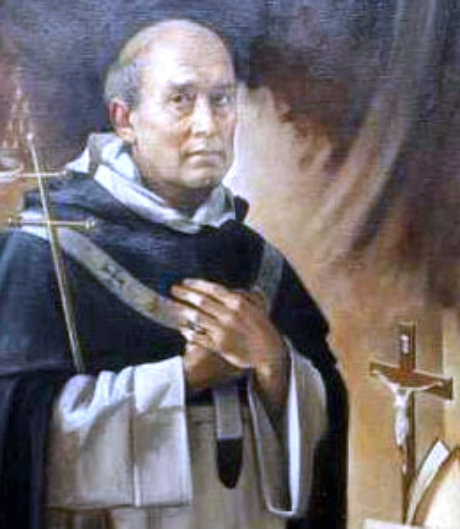 He was venerated by the people and, according to the Bollandists, has always been honoured with the title of “Blessed”.   In recognition of this, he was formally Beatified in 1793.   He wrote commentaries on Scripture, was the reputed author of a commentary on the “Hierarchy” of St Dionysius the Areopagite, of two volumes of sermons and some smaller works.

O God, who made Blessed Bartholomew, Your Confessor and Bishop, wonderful in leading the enemies of the faith from the darkness of error to the light of truth and in bringing back multitudes to peace and concord, grant, through his intercession, that Your peace, which passes all understanding, may keep our hearts and minds in Christ Jesus our Lord, who lives and reigns with You forever and ever.