Saint of the Day – 9 December – Blessed Liborius Wagner (1593-1631) Priest and Martyr, Teacher, Confessor, Apostle of Charity, Teacher – born on 5 December 1593 at Mühlhausen, Unstrut-Hainich, Thuringia, Germany and died by being beaten to death with swords and firearms on 9 December 1631 near the River Main, Schonungen, Schweinfurt, Germany. He administered throughout his pastoral mission in Würzburg and was killed “in odium fidei” (in hatred of the faith).   He performed a wide range of charitable acts and he was more than willing to shed his blood for his beliefs and for his fellow Christians. Patronage – of persecuted Christians.

He grew up in a Protestant household during the Counter-Reformation period.   His decision in 1613, to learn Counter-Reformation theological matters in Würzburg and this was a decision that his parents disapproved of.   This led him to convert to the Catholic Faith which earned the ire of his parents especially when he continued his studies in order to become a Priest.

He became a teacher in 1617 and was ordained as a priest on 29 March 1625.  Thereafter, the became the parish priest of an area split between Protestants and Catholics.   He attempted to reconcile both, as best he could but the divisions made this process extremely painful and difficult..

Fr Liborius was driven from his parish to another town during a time of conflict in Central Europe.   Swedish Protestant soldiers apprehended him in a schoolhouse and tortured him for almost a week.   He refused to renounce his faith and killed him on 9 December 1631.   The immediate cause of his death was beating with firearms and swords.

His body was stripped of his priestly garments to make identification more difficult and thrown into the River Main but was recovered from the river by Catholics living nearby and buried.   Following the end of Swedish rule in the area, his body was re-interred in the chapel of the castle of Mainberg and finally re-interred in the parish church of San Lorenzo, Heidenfeld, Germany on 15 December 1637, where his Shrine now resides, see the images below.   It is a place of pilgrimage for many Catholics, especially those suffering persecution.

St Pope Paul VI declared Blessed Liborius a Venerable in 1973 then Beatified him on 24 March 1974 as a Martyr. 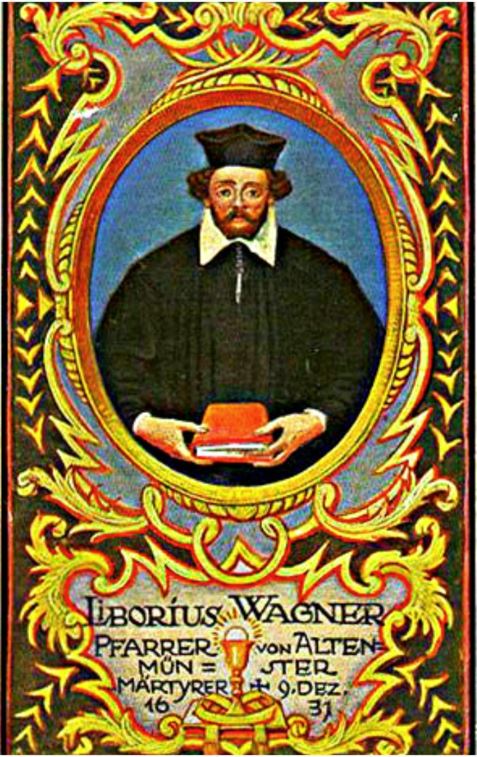