Thomas Holland suffered from poor health during the whole of the seven years he spent in active ministry in his native England.   Despite his suffering, he fearlessly moved around London to bring the Sacraments to Catholics during this terrible and fearful period of oppression.

He was born in Lancashire and attended the English College at Saint-Omer in Flanders for six years.   He moved to Valladolid, Spain, in August 1621, to attend the English College there and then returned to Flanders in 1624 in order to enter the Jesuits.   He did his novitiate and theological studies in Flanders and was Ordained there, before being assigned to be the spiritual director of the scholastics at Saint-Omer.   In 1635 he was assigned to the English mission, in the hope that his native air would meliorate the poor health he had begun to suffer.

The conditions in which he had to live in England made his health worse, unfortunately. He had to stay indoors all day and travel only at night because of the danger of arrest byPpriest-hunters.   The hardships he endured caused a loss of appetite, which only worsened his condition.   Ill health, however, did not keep him from his mission and he continued until his arrest on 4 October 1642, on suspicion of being a Priest.

He was detained at New Prison in London for two weeks and then taken to Newgate to be tried. No evidence could be put forth proving that he was a Priest.    He had been very careful in prison not to be caught praying but when the court asked him to swear that he was not a Priest, he refused, the jury found him guilty and condemned him to die.   The French ambassador offered to intervene to try to win his freedom but Holland said he preferred martyrdom.

Some Capuchin friends smuggled Mass supplies into prison so he could celebrate the Eucharist one last time.

On the morning of 12 December 1642, he was dragged to Tyburn to be executed.   He prayed for those who had condemned him and for King Charles I, the royal family, parliament and the nation.   He gave the hangman the little money he had, forgave him for what he was about to do and then was hanged until he was dead.   His body was then beheaded and quartered and exposed on London bridge. 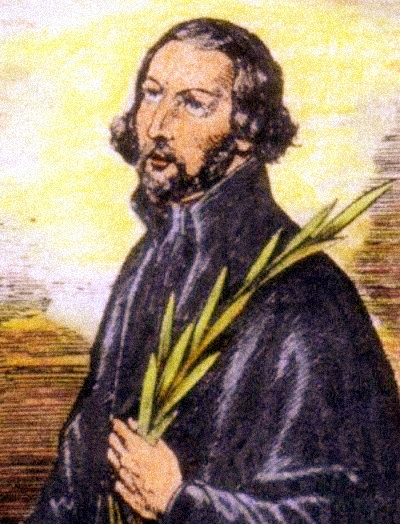 This Jesuit site provides more details about his execution and his beatification:

Fr Holland was dragged to Tyburn at mid-morning of the 12th and seeing a crowd had gathered in silence, he spoke:

“I have been brought here to die a traitor, a Priest and a Jesuit but in truth none of these things has been proved.”   Then mounting the cart, he placed the noose about his neck and told the people that he was truly a Priest and a Jesuit and that he pardoned the judge and jury that had condemned him..   He recited his acts of faith, hope, charity and contrition and then prayed for King Charles I and the nation “for whose prosperity and conversion to the Catholic faith, if I had as many lives as there are hairs on my head, drops of water in the ocean, or stars in the firmament, I would most willingly sacrifice them all.”   These words brought cheers from the crowd.   He then forgave his executioner for what he is about to do and gave him the few coins he still had in his pocket.

With eyes closed in prayer, Fr Holland looked at a Priest secretly in the crowd and received absolution.   After he was hanged, his body was beheaded and quartered and exposed on London Bridge.   Fr Holland was only forty-two years of age and a Jesuit for eighteen years.   Pope Pius XI beatified him on December 15, 1929.

Blessed Thomas Holland, your faith was your crime, pray for us!