Saint of the Day – 30 December – Blessed Giovanni Maria Boccardo (1848-1913) he is remembered as “Father of the Poor” – Priest, Founder of the Poor Daughters of Saint Cajetan.    Born on 20 November 1848 in Ca’Bianca, Moncalieri, Turin, Italy and died on 30 December 1913, aged 65 in Moncalieri, Turin, Italy of natural causes.    Patronages – the Poor Daughters of St Cajetan and against cancer.   Blessed Giovanni is the elder brother of Blessed Luigi Boccardo (1861-1936), whose memorial is on 9 June and who founded a contemplative branch of his brother’s order.

Giovanni Maria Boccardo was born in Turin, Italy, in 1848 as the eldest of ten children born to Gaspare Boccardo and Giuseppina Malebra.   He was baptised on 21 November. Three brothers – including Luigi Boccardo – became priests and another three died as infants.

Giovanni was generous to the plight of the poor as a child and adolescent and on one occasion cared for a blind beggar.   He studied with the Barnabites in 1861 and graduated from their school in 1864 and thereafter, commenced his studies for the priesthood.   He was Ordained in Turin in 1871.

After his Ordination, he was appointed assistant and then spiritual director of the Seminaries in Chieri and Turin.  In this office he was a guide and father to his seminarians and gave them the best of his heart and his priestly knowledge.   He became a friend of St John Bosco, whilst at the Seminaries and also met and forged longstanding friendships with Blessed Leonardo Murialdo and Blessed Giuseppe Allamano.    He received a doctorate in his theological studies on 1 February 1877. 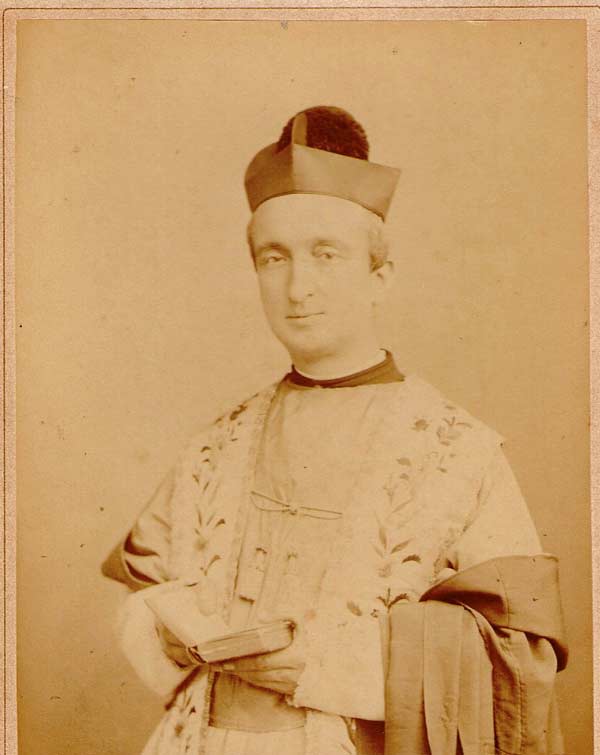 Fr Giovanni was named as a Canon of the Church of Santa Maria della Scala in Chieri and in 1882 was appointed Parish Priest of Pancalieri.   He obediently accepted this post, which was to be his last on earth.   The separation from his Seminarians must have deeply pained his sensitive heart.   For Fr Boccardo, who maintained and increased his early apostolic enthusiasm despite the stress of daily life, his Parish was a true “mission land.”   On the day set for his solemn entry into the parish, at the sight of the church’s bell tower in the distance, Fr Boccardo offered himself as a victim for the good of his parishioners, so that the Lord would not allow a single one of the souls entrusted to his pastoral care to stray.

He was present for his brother Luigi’s first Mass as a priest on 8 June 1884.

After serving as parish priest in Pancalieri for two years, the village was stricken with cholera.   Bl Boccardo threw himself into caring for the sick, even at the risk of his own life, spending on them all his physical and moral energies and means.   When the epidemic was over, the village was left with abandoned elderly, orphaned children and poor people who no longer had a roof over their heads or any resources.   This situation made a deep impression on his fatherly heart.   He prayed, sought advice and, when he was certain of God’s will, he laid the foundations of the Hospice of Charity and later, of a Congregation of Sisters called the Poor Daughters of St Cajetan, who in a few years spread throughout Piedmont and Italy.

He believed that a Parish Priest’s first duty was the saving of souls, via Catechesis  and evangelisation.   He preached Jesus Christ and His Gospel in its entirety.    He celebrated the Sacraments with zeal and love, he preached to teach and help his parishioners grow in sanctity, he was committed to the ministry of Confession and of visiting the prisons of Saluzzo to provide spiritual comfort to prisoners.   He was the “good father”, the father of all, especially of the sick and the poor.   His life was filled with arduous penances hidden beneath a constant smile.   When it was a question helping others, he never refused.

As a faithful shepherd, he served his Parish with paternal affection until his death on 30 December 1913.   His secret?   He did not seek himself but sacrificed himself to strengthen, in his faithful, the life of the spirit.   And, he never failed to serve the body too of the poor, the sick, the needy.

His spiritual writings runs to a total of 44 volumes.

As of 2005 there were 132 religious in a total of 20 houses in Europe and Argentina, India, various countries in Africa and Togo.

He was Beatified on 24 May 1998 by St Pope John Paul II.   The beatification miracle involved the complete healing from cancer of 80-year-old Lina Alvez De Oliveira of Sao Paolo, Brazil on 12 February 1968, hence his patronage against cancer.