Saint of the Day – 21 March – St Enda of Aran (c 450 – c 530) Priest, Monk, Abbot of Aran “Fatheh of Irish Monasticism”  and Aran is known as “Aran of the Saints” – also known as Éanna, Edna, Éinne, Endeus, Enna – born in Meath, Ireland and died in c 530 of natural causes.   Enda was a warrior-king of Oriel in Ulster, converted by his sister, Saint Fanchea, an abbess.   About 484 he established the first Irish Monastery at Killeaney on Aran Mor.   Most of the great Irish saints had some connection with Aran. 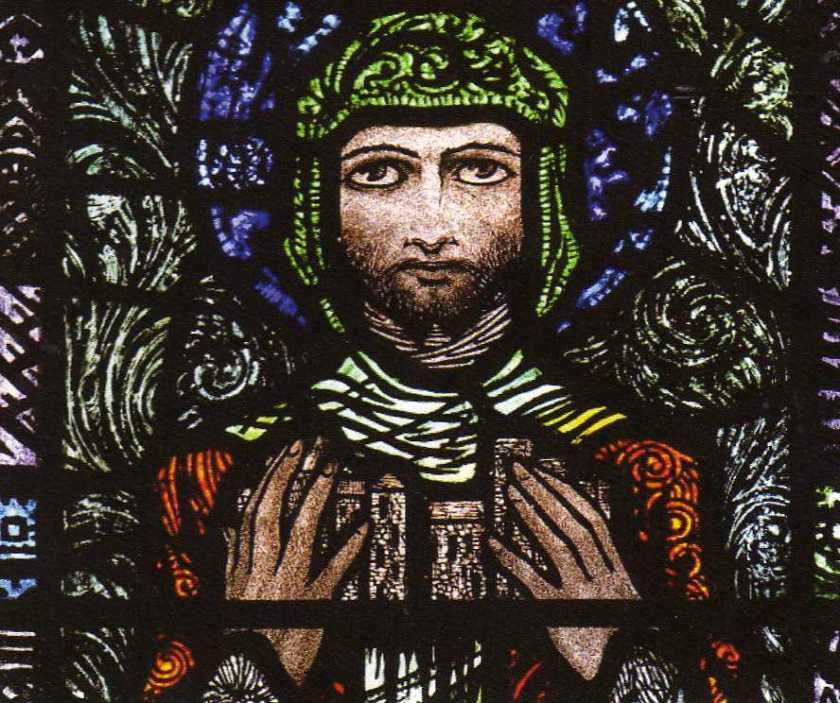 According to the Martyrdom of Oengus, Enda was an Irish prince, son of Conall Derg of Oriel (Ergall) in Ulster.   Legend has it that when his father died, he succeeded him as king and went off to fight his enemies.   The soldier Enda, was converted by his sister, Saint Fanchea, an abbess.   He visited St Fanchea of Rossory (died c 585), who tried to persuade him to lay down his arms.   He agreed, if only she would give him a young girl in the convent for a wife. He renounced his dreams of conquest and decided to marry.   The girl she promised turned out to have just died and Fanchea forced him to view the girl’s corpse, to teach him that he, too, would face death and judgment.

Faced with the reality of death and by his sister’s persuasion, Enda decided to study for the priesthood and studied first at St Ailbe’s monastery at Emly.   Fanchea sent him to Rosnat, a great centre of Monasticism.   There he took Monastic vows and was Ordained.

In this way, St Fanchea succeeded in turning her brother not only from violence but even from marriage. He left Ireland for several years, during which time he became a Monk and was ordained as a Priest.

Upon his return to Ireland, he petitioned his King Aengus of Munster – who was married to another of Enda’s sisters – to grant him land for a Monastic settlement on the Aran Islands, a beautiful but austere location near Galway Bay off Ireland’s west coast.

During its early years, Enda’s island mission had around 150 monks.   As the community grew, he divided up the territory between his disciples, who founded their own Monasteries to accommodate the large number of vocations.   Enda did not found a religious order in the modern sense but he did hold a position of authority and leadership over the Monastic settlements of Aran – which became known as “Aran of the Saints,” renowned for the monks’ strict rule of life and passionate love for God.

Enda’s monks imitated the asceticism and simplicity of the earliest Egyptian desert hermits.   He established the Monastery of Enda, which is regarded as the first Irish Monastery, at Killeany on Inismór.   He also established a Monastery in the Boyne valley and several others across the island and along with St Finnian of Clonard is known as the Father of Irish monasticism.   At Killeaney, the monks lived a hard life of manual labour, prayer, fasting and study of the Scriptures.   The monks of Aran lived alone in their stone cells, slept on the ground, ate together in silence and survived by farming and fishing.   St Enda’s monastic rule, like those of St Basil in the Greek East and St Benedict in the Latin West, set aside many hours for prayer and the study of scripture. 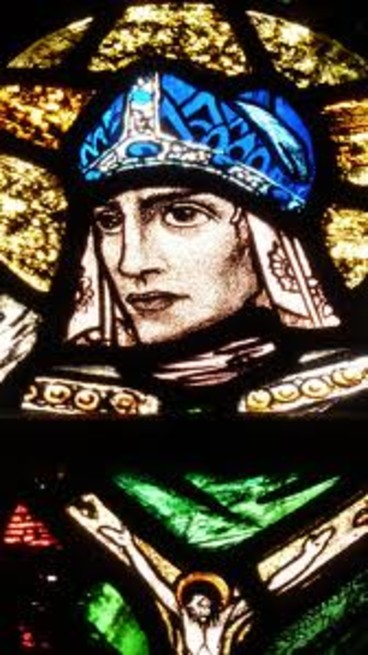 Enda divided the island into two parts, one half assigned to the Monastery of Killeany, and the western half to such of his disciples as chose “to erect permanent religious houses on the island.”   Later he divided the island into 8 parts, in each of which he built a “place of refuge”.   The life of Enda and his monks was frugal and austere.   The day was divided into fixed periods for prayer, labour and sacred study.   Each community had its own church and its village of stone cells, in which they slept either on the bare ground or on a bundle of straw covered with a rug but always in the clothes worn by day. They assembled for their daily devotions in the church or oratory of the saint under whose immediate care they were placed.   The monks took their meals in silence in a common refectory, from a common kitchen, having no fires in their stone cells, however cold the weather or wild the seas.

They invariably carried out the monastic rule of procuring their own food and clothing by the labour of their hands.   Some fished around the islands, others cultivated patches of oats or barley in sheltered spots between the rocks.   Others ground grain or kneaded the meal into bread and baked it for the use of the brethren.   They spun and wove their own garments from the undyed wool of their own sheep.   They could grow no fruit in these storm-swept islands, they drank neither wine nor mead and they had no flesh meat, except perhaps a little for the sick.

During his own lifetime, Enda’s Monastic settlement on the Aran islands became an important pilgrimage destination, as well as a centre for the evangelisation of surrounding areas.   At least two dozen Canonised Saints had some association with “Aran of the Saints.”

Enda’s Monastery flourished until Viking times but much of the stone was ransacked by Cromwell’s men in the 1650s for fortifications, so only scattered ruins remain.   Most survive as coastal ruined towers.   Cattle, goats, and horses now huddle and shiver in the storm under many of the ruins of old walls where once men lived and prayed.   These structures were the chosen home of a group of poor and devoted men under Saint Enda. He taught them to love the hard rock, the dripping cave and the barren earth swept by the western gales.   They were “Men of the Caves” and “also Men of the Cross.” 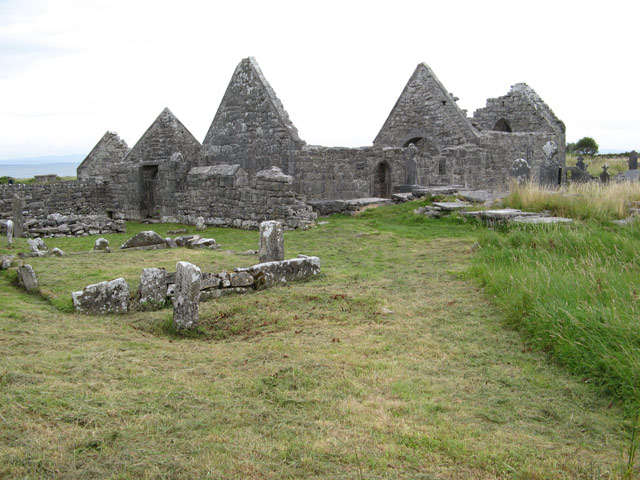 St Enda himself died in old age around the year 530.   An early chronicler of his life declared that it would “never be known until the day of judgment, the number of saints whose bodies lie in the soil of Aran,” on account of the onetime-warrior’s response to God’s surprising call.   His remains are buried at Tighlagheany, Inishmore, Ireland.

During his own lifetime, Enda’s monastic settlement on the Aran islands became an important pilgrimage destination, as well as a centre for the evangelisation of surrounding areas.   At least two dozen canonised individuals had some association with “Aran of the Saints”.   Among these were Saint Brendan the Navigator (c 484–c 577) https://anastpaul.com/2019/05/16/saint-of-the-day-16-may-st-brendan-the-navigator-c-484-c-577/, who was blessed for his voyage there, St Jarlath of Tuam, St Finnian of Clonard (470–549) https://anastpaul.com/2019/12/12/saint-of-the-day-12-december-saint-finnian-of-clonard-470-549-tutor-of-the-saints-of-ireland/ and Saint Columban (543-615) https://anastpaul.com/2018/11/23/saint-of-the-day-23-november-st-columban-543-615/ who called it the “Sun of the West.   Aran became a miniature Mount Athos, with a dozen Monasteries scattered over the island, the most famous, Killeany, where Enda himself lived.   There, a great tradition of austerity, holiness and learning was begun. 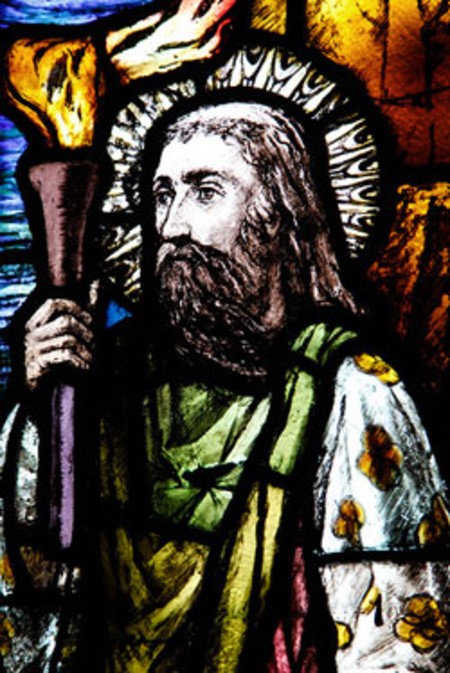 Saint Ciaran of Clonmacnoise (c 516 – c 549) came there first as a youth to grind corn and would have remained there for life but for Enda’s insistence that his true work lay elsewhere, reluctant though he was to part with him.   When he departed, the Monks of Enda lined the shore as he knelt for the last time to receive Enda’s blessing and watched as the boat bore him from them.   Saint Finnian left St Enda and founded the Monastery of Moville (where Columba spent part of his youth) and who afterwards became Bishop of Lucca in Tuscany, Italy.

Those who lived there loved the islands which “as a necklace of pearls, God has set upon the bosom of the sea” and all the more, because they had been the scene of heathen worship – according to a prophecy, “there will be left only three islands altogether, when Innish is sent from mortal planes, Inishmore, Inishmaan, and Inisheer.” On the largest will stand Saint Enda’s well and altar and the round tower of the church, where the bell was sounded, which gave the signal that Saint Enda had taken his place at the altar.   At the tolling of the bell the service of the Mass began in all the churches of the island. 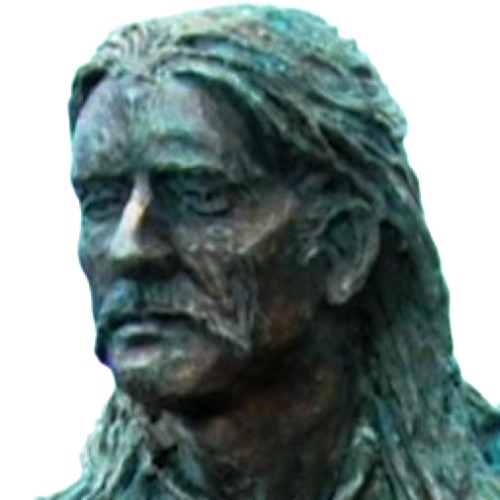