Saint of the Day – 23 March – St Rafqa Pietra Choboq Ar-Rayès OLM (1832 – 1914) Nun of the Order of Daughters of Mary of the Immaculate Conception, the “Mariamettes” and then of the Lebanese Maronite Order, Teacher and Catechist, Apostle of Prayer and Eucharistic Adoration, Marian devotee, Apostle of suffering – also known as Boutrossieh Ar-Rayes, Lily of Himlaya, Little Flower of Lebanon, Purple Rose, Rafka Al Rayes, Rafqa Shabaq al-Rayes, Rebecca Pierrette Ar-Rayes – born as Boutrossieh (in Arabic as the feminine of Peter) Ar-Rayès on 29 June 1832 and died on 23 March 1914 at the Convent of Saint Joseph, Grabta, Lebanon of natural causes.   Patronages – against bodily ills or sickness, against loss of parents, of the sick.

Rafqa in Himlaya (1832-1859):
Rafqa was born in Himlaya, one of the villages of Northern Metn (Lebanon), on 29 June 1832.   She was the only child of Mourad Saber el-Choboq el Rayess and Rafqa Gemayel. On 7 July 1832 she was Baptised and named Boutroussieh.   Her parents taught her the love of God and the practice of daily prayer.   At age seven, she suffered her first great loss with the death of her mother.

In 1843, her father experienced financial difficulties and sent her into service for four years in the home of Assaad Badawi.   Rafqa grew into a beautiful, pleasant, humourous young woman, pure and tender with a serene voice.

When she was 14 years old, she returned home to find that her father had remarried.  His new wife wanted Rafqa to marry her step-brother.   Conflict developed when her step-mother sought to arrange a marriage between her son and Rafqa.

Rafqa in the Congregation of the Mariamettes (1859-1971):
At this time, Rafqa felt drawn to the religious life.   She asked God to help her achieve her desire and set off for the convent of Our Lady of Deliverance in Bikfaya, accompanied by two girls whom she met along the road.   When she entered the convent church, she felt deep joy and happiness.   One look at the icon of Our Lady of Deliverance and she heard God’s voice confirming her desire to enter religious life.

Following a year of postulancy, Rafqa received the habit of her congregation on the feast of St Joseph, 19 March 1861.   A year later, she pronounced her first vows.   The new nun, along with sister Mary Gemayel, was assigned to work in the Jesuit-run seminary in Ghazir.   Among the seminarians were Elias Houwayek and Boutros el-Zoghbi, later to become Partriarch and Archbishop, respectively.   Rafqa was in charge of kitchen service.   In her free time she studied Arabic, calligraphy and mathematics and also helped to educate girls aspiring to join her congregation.

In 1860 Rafqa was sent to Deir el-Kamar to teach Catechism.   There she witnessed the bloody clashes that occurred in Lebanon during this period.   On one occasion, she risked her own life by hiding a child under her robe and saving him from death.   After a year in Deir el-Kamar, Rafqa returned to Ghazir.   In 1862, she was sent to teach in a school of her order in Byblos.   One year later, she was transferred to Maad village.   There, with another nun, she spent seven years establishing a new school for girls, made possible through the generosity of Antoun Issa. 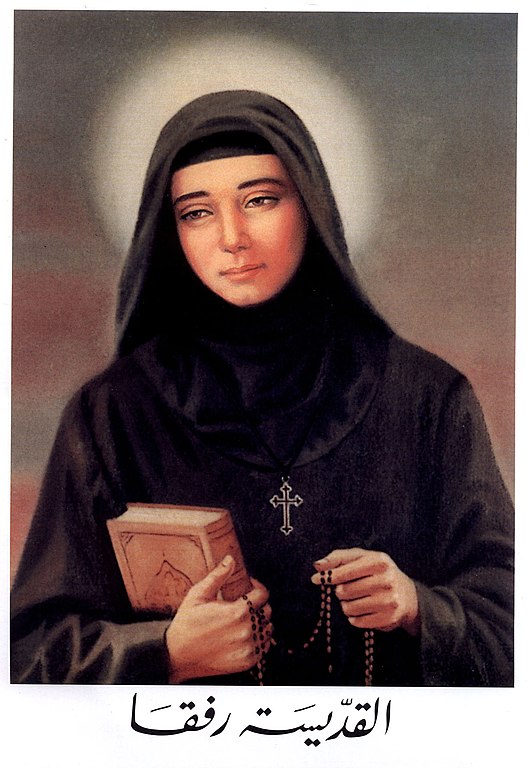 While living in Maad and following a crisis in her congregation, Rafqa sought divine guidance.   Entering St George’s Church, she prayed for help.   Once again, she heard the Lord’s voice confirming her call to religious life.   Soon after, she dreamt that St George, S. Simon and St Anthony the Great, the Father of Monasticism, were telling her to enter the Lebanese Maronite Order.

Her move from Maad to the Maronite Monastery of St Simon el-Qarn in Aito was facilitated by the generosity of Mr Antoun ISSA.   She was immediately admitted to the Order, receiving the habit on 12 July 1871 and pronouncing her vows on 25 August 1872. She received the name, sister Rafqa, after her mother.

She was to spend the next 26 years in the monastery of St Simon.   In her observation of the rule, her devotion to prayer and silence, in her life of sacrifice and austerity, she was a role model to the other nuns.

In 1885 Rafqa decided not to join the nuns for a walk around the monastery.   In her autobiographical account she wrote, “It was the first Sunday of the Rosary.   I did not accompany them.   Before leaving each of the nuns came and said to me, ‘Pray for me sister.’   There were some who asked me to say seven decades of the Rosary … I went to the Church and started to pray.   Seeing that I was in good health and that I had never been sick in my life, I prayed to God in this way, ‘Why, O my God, have you distanced yourself from me and have abandoned me  . You have never visited me with sickness! Have you perhaps abandoned me?’”   Rafqa continued in her account to her superior, the next night after the prayer “At the moment of sleeping I felt a most violent pain spreading above my eyes to the point that I reached the state you see me in, blind and paralysed and as I myself had asked for sickness I could not allow myself to complain or murmur.”

Her superior insisted that she undergo medical treatment. After all local attempts to cure her had failed, she was sent to Beirut for treatment.   Passing by St John-Mark’s Church in Byblos, her companions learned that an American doctor was travelling in the area.  Contacted, he agreed to perform surgery on the afflicted eye.   St Rafqa refused anesthesia.   In the course of the surgery, her eye became completely detached.   Within a short time, the disease struck the left eye.

For the next 12 years she continued to experience intense pain in her head.   Throughout this period, as before, she remained patient and uncomplaining, praying in thanksgiving for the gift of sharing in Jesus’ suffering.

2. Rafqa in St Joseph Monastery al Dahr in Jrabta (1897-1914):
When the Lebanese Maronite Order decided to build the Monastery of St Joseph al Dahr in Jrabta, Batroun, in 1897, six nuns, led by Mother Ursula Doumit, were sent to the new monastery.   Rafqa was among them.

In 1899, she lost the sight in her left eye.   With this a new stage of her suffering began, intensified by the dislocation of her clavicle and her right hip and leg.   Her vertebrae were visible through her skin.  Her face was spared and remained shining to the end. Her hands stayed intact and she used them to knit socks and make clothing.   She thanked God for the use of her hands while also thanking Him for permitting her a share in His Son’s suffering.

Based on direct evidence and on the autopsy of Rafqa’s remains in 1927, she had become paralysed due to complete disarticulation in her wrist and finger joints, while the pain continued in her head, her devastated eye sockets and her nosebleeds … completely immobile, her lower jaw touched her benumbed knee.

Even in this state, Rafqa was able to crawl to the chapel on the feast of Corpus Christi to the amazement of all the sisters.   When asked about this, Rafqa replied, “I don’t know.   I asked God to help me and suddenly I felt myself slipping from the bed with my legs hanging down, I fell on the floor and crawled to the chapel.”

On a separate occasion, when asked by her superior if she would like to see, Rafqa responded, “I would like to see for at least an hour, to be able to look at you.”   In an instant the superior could see Rafqa smile and suddenly said, “Look, I can see now.”   Not believing her, Sister Ursula put her to the test asking her to identify several objects. 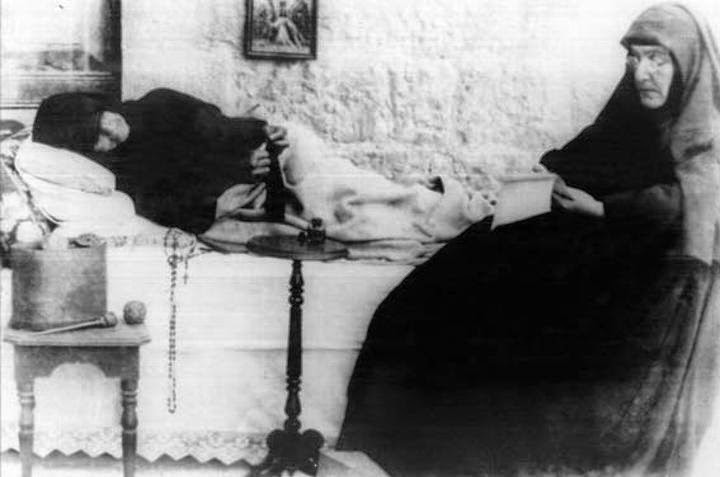 Three days before her death, Rafqa said, “I am not afraid of death which I have waited for a long time.   God will let me live through my death.”    Then on 23 March 1914, four minutes after receiving final absolution and the plenary indulgence, after a life of prayer and service and years of unbearable pain, she rested in peace.  She was buried in the Monastery cemetery.

On 10 July 1927, her body was transferred to a shrine in the corner of the Monastery chapel.   The cause for her Beatification was introduced on 23 December 1925 and canonical investigation of her life began on 16 May 1926.   St Pope John Paul II declared her Venerable on 11 February 1982;  Beatified her on 17 November  1985 as a role model in the Adoration of the Eucharist during the Jubilee Year 2000. … Vatican.va

“By Canonising Blessed Rafqa Choboq Ar-Rayès, the Church sheds a very particular light on the mystery of love given and received for the glory of God and the salvation of the world. This nun of the Lebanese Maronite Order desired to love and to give her life for her people. In the sufferings which never left her for 29 years of her life, St Rafqa always showed a passionate and generous love for the salvation of her brothers, drawing from her union with Christ, who died on the cross, the force to accept voluntarily and to love suffering, the authentic way of holiness.

May St Rafqa watch over those who know suffering, particularly over the peoples of the Middle East who must face a destructive and sterile spiral of violence. Through her intercession, let us ask the Lord to open hearts to the patient quest for new ways to peace and so hasten the advent of reconciliation and harmony.”